For a couple of years Toyota has sold the Lexus IS sedan with a somewhat underpowered 2.5-liter V-6 engine. The luxury sedan as a result has fared a tad bit worse when compared with its German rivals. We were expecting Toyota to up the ante with the 2016 edition- and the new IS 200t hits the sweet spot, almost!

The sedan with its turbocharged engine which was also used in the NX 200t crossover can cope with most of its category rivals with ease. The base trim, however, comes with rear wheel drive instead of AWD. It seems a true successor for the old IS 250. You can press the button for an F SPORT package which adds some pizzazz to the base model.

You expect a luxury sport sedan to look, well sporty! The Lexus IS 200t has identical looks to its IS sedan siblings and that is not a bad thing after all. You get the similar sharp lines and aggressive styling. The nice thing is that Toyota has managed to make the sedan look bold without going over the top in the design department.

Compared to the rival models, the IS 200t stands out owing to its sharp creases, angular headlamp’s, and an aggressive looking grille. We have driven plenty of Lexus models – RC F, RC 350, IS 350, ES 300h, NX 200t, etc and their bold exterior design styling moved us, including the spindle grill. It was the same with Lexus IS 200t.This is even more evident when you look at the IS 200t F SPORT variant. In the F SPORT form, you get an enticing honeycomb spindle grille and large 18-inch wheels.

Just like the aggressive and sharp styling of its exterior, the interiors of the IS 200t, has garnered a mixed response. There is no denying the cabin oozes luxury in every inch – in sync with the luxury sedan segment. The cabin is wrapped in quality soft leather and even the plastic is not cheap at all. The cabin layout looks classy and the touch of craftsmanship is evident. Lexus uses an analog clock – unlike their rivals which is cool! The interior looks rather dark, but the overall ambiance is pleasant.

In the F SPORT version of Lexus IS 200t, you receive an F SPORT steering wheel with paddle shifters along with ventilated sport bucket seats at the front. There are digital instrument cluster, rain-sensing wipers as well as a moon roof.

We liked that Toyota has packed in a generous 306 liter boot, better than what some of its rivals offer. The rear seats can be folded in a 60/40 ratio which is quite practical. There is a smartphone holder in the front which is handy. 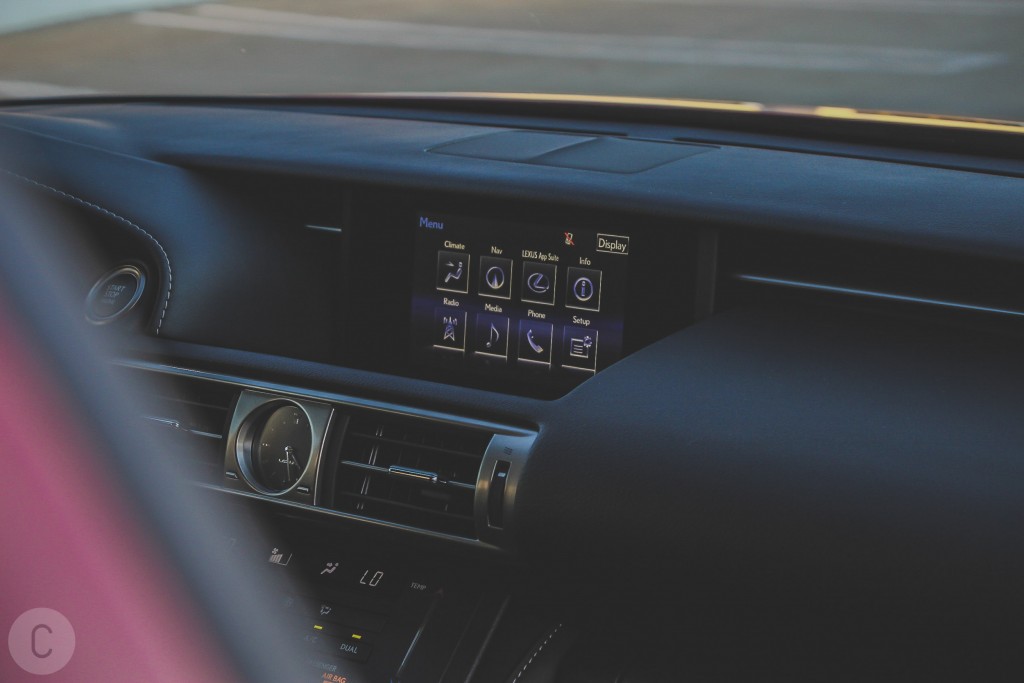 There are plenty of entertainment options including SiriusXM satellite radio with HD Radio and iTunes tagging feature. Entertainment buffs can flip the switch for the Mark Levinson Premium Surround Sound system – which we feel is rather impressive.

It is good to see Toyota has included safety features like direct tire pressure monitoring system (Direct TPMS), smart ride and Lexus Enform Safety Connect. The last one helps you when the car is stranded on roads or if it gets stolen. Some handy safety features are optional on base IS 200t model, including rain sensing wipers, pre-collision system, backup camera with dynamic gridlines, and blind spot monitoring.

The Remote Touch controller seemed awkward initially, but we became used to it over time. In the age of touch screens, a knob to control the multimedia screen may look a little out of place for some but no car is perfect right?

The EPA fuel economy of the Lexus IS 200t is decent, but not really mind blowing. The sedan scores 22 mpg in the city, 33 mpg on the highway and 26 when combined. This is slightly better than the older IS 250 but some rivals do better in this segment. So this means a few mileage conscious buyers can do better by picking a competitor who has their own turbocharged 4-cylinder engine. 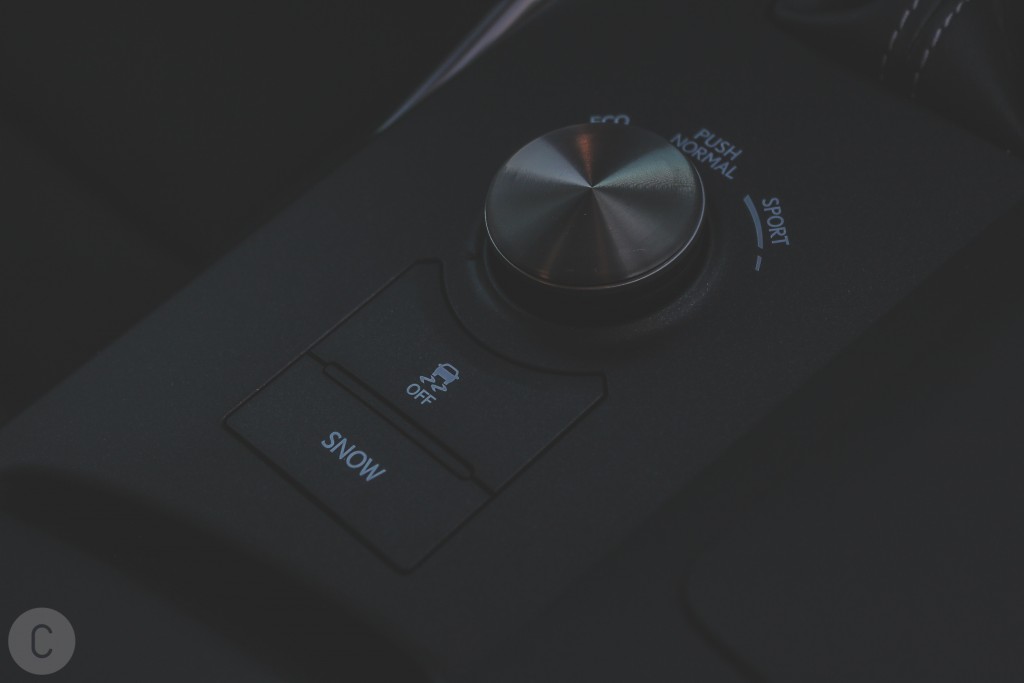 As it is, the IS 200t is powered by the same engine used in its sibling NX 200t crossover, but the former is lighter and that is why we felt the engine more alive and agile. The F SPORT package actually translates into some peppiness on the road. The engine is assisted by a unique 8-speed automatic transmission with Electronically Controlled Transmission with intelligence (ECT-i).

The sedan comes with 3 driving modes – namely Eco, Sport, and Normal. The Sport+ mode is kept for the pricier IS 350, which we found a tad disheartening. The Eco mode, as its name implies, is not meant for speeding on highways. For city driving, Normal mode is fine, but we stuck to the Sport mode most of the time we were behind the wheels.

In the F SPORT variant, there is an enhanced suspension which results in firm ride and minimal body roll. Its 18-inch wheels offer excellent grip while ventilated disc brakes offer excellent performance. We particularly loved how the SPORT variant never felt out of control when cornering at relatively high speed. The traction control mechanism has been finely tuned by Toyota.

The Lexus IS 200t reaches 62 mph from 0 within 7 seconds. The top speed is capped at 143 mph. These are not staggering figures by any means –more so in its segment. However, the improvements over the IS 250 are quite clear. It is a sedan that can feel sporty but is not the speed beast. Even in Sport mode, the IS 200t cannot really outshine the German rivals.

The ride quality is decent with minimal body roll as we felt. For most part, its 8-speed transmission worked nicely except when we tried to raise the levels. It does feel a tad bit stiff, more so when you drive it over bumpy roads or lanes with potholes. The earlier IS models drew the flak for their space crunch in the rear. The IS 200t is not much improved in this regard and tall people will feel a squeeze in the leg room. The Sport variant’s bucket seats do offer decent lumbar support, but we found they are not comfortable for long rides either.

The Lexus IS 200t improves in some key areas compared to the predecessor, IS 250. While the deployment of beefier turbocharged 4-cylinder engine is commendable, it still does not outstrip German rivals. The BMW 328i dwarfs the Lexus with its AWD. People who need to drive a lot in winter will not love the RWD in the IS 200t. While the styling looks aggressive and interior is plush, certain technology and safety features are still missing. The riding and mileage however, have improved. Overall, the Luxury sedan comes across as a step in the right direction.

Like it: The Lexus IS 200t gets a beefier 4-cylinder turbocharged engine and exterior styling is quite in your face. The F SPORT package does add to the adrenaline rush in performance seekers.

Leave it: It is not a match for the German luxury sedans yet. The RWD is something demanding users will grudge about. Lexus IS 200t sedan also loses out on safety features.

The Lexus IS 200t faces stiff competition from the German rivals. Its main challengers are the formidable 2016 BMW 328i and Mercedes-Benz C200.

The BMW 328i is the opponent the Lexus IS 200t will get the most competition from. The BMW offers a similar turbocharged engine as the Lexus but scores better owing to its AWD support. Both in top speed and acceleration it tops the Japanese rival.

The Mercedes-Benz C200 is another rival that the Lexus IS 200t will be at loggerheads with. The C200 does score lower than the Lexus in both acceleration and horsepower but it has an impressive pedigree to boot.

Written By
Angel Mosqueda
More from Angel Mosqueda
The jury’s been out on how well Honda’s luxury brand Acura has...
Read More
0 replies on “2016 Lexus IS 200t”