Volvo’s cars are known to be among the safest. Now, the brand is literally electrifying: The Swedish automaker has recently joined the fray of other automakers in announcing that each new model launched post-2019 will come with an electric motor.

The name is a bit of misnomer, since it’s not two engines but actually a single gasoline four-cylinder engine that is supercharged and turbocharged. One of the electric motors, powered by a 10.4-kWh lithium-ion battery pack, is on the transaxle and powers engine start. The other is located on the rear axle. An 8-speed automatic transmission generates torque to the front wheels the old fashioned way.

Our tester came in the Crystal White Metallic color, a $595 upgrade that gives the car a regal look and feel. The Inscription upgrade costs $4,500 and features several amazing add-ons. First, the 19-inch 10-spoke alloy wheels. These aren’t just any wheels, as Volvo’s Silver Diamond Cut alloy wheels are painted with three layers of a clear coat as well as a pre-treatment base. The wheels protect against corrosion, are well-ventilated and are centered on the hub with small tolerances, ensuring good wheel balance.

Thor’s Hammer DRL and Auto High beam system features advanced LED light technology, emanating wide and long light patterns. This being a Volvo and all, courtesy is a must: The sedan’s headlights stay on high beam at all times and automatically switch to low beam when the system detects a car coming from the opposite direction.

Another option available is the Luxury Package, which includes 20-inch Inscription alloy wheels with summer tires, and costs $800. The Inscription grille makes a strong statement, as it’s made to appear as if it’s floating inside the body opening and features unique chrome bars and shiny chrome frame. The black lower grille is also accented with a chrome strip.

The S90’s panoramic roof is a marvel in and of itself. Power-operated, the front section of the roof can be opened or tilted by tapping a button. The sunshade features perforated textile to reduce glare and create a vibrant feel inside the car at all times.

The S90 has a sprawling body and an elongated hood, which effectively create a regal, limousine-like appearance. With a 90-degree fascia symmetrically proportioned to the grille and headlights, LED headlights representing Thor’s hammer, this Volvo is perched like a monarch. Its body language may resemble other Volvo models, but its proportions are just more voluptuous.

The 2018 model has an indelible roof and sports a longer wheelbase which means back doors stretch some four inches longer. From the back, an S90 is most distinguishable thanks to a pronounced trunk. Utility meets aesthetic here: There’s plenty of luggage space inside the trunk and well-crafted C-shaped tail lights outside of it. The luxury allure is completed with detail in the form of chrome Volvo lettering.

The 2018 Volvo S90 T8 E-AWD Inscription is one silky smooth Scandinavian machine. The car’s upholstery features charcoal-colored Maroon Brown Perforated Nappa Leather and with available matte wood trims combined with French stitching, the car communicates fine luxury just about as well any Volvo ever made. The linear walnut wood inlays in the Inscription trim are hand-selected and the grain is book-matched in a technique typically reserved for fine furniture.

The Luxury Package, which is a $3,450 upgrade, takes the luxury to an insane level. In addition to the ultra-comfortable leather, the front seats also get massagers — that’s right, a massage is available whenever you want it. The driver and front passenger can pick from from five programs, three speeds and three intensities.

This package also comes with leather wrapped sunvisors and grab handles, as well as a deluxe rear seat armrest. This upgrade to the S90 Inscription also comes with a larger back seat and a fold-down matte wood armrest. These touches are a nod to business executives and on par with features available in German luxury sedans.

With one of two leather grades available, the passenger and the driver are in for world-class luxury, and with narrow roof pillars, both have clear view of the surroundings.

As far as S90’s interior options, owners can go with glossy or matte to match tailored leather-wrapped dashboard and upper door panels. Perhaps the most mesmerizing feature inside the sedan, however, is the crystal gear-shift knob. Handcrafted from genuine, solid crystal by Swedish glass artisans at Orrefors, it serves as a stunning reminder of Volvo’s heritage as well as contemporary Scandinavian design.

The power-operated sun curtains, rear window and rear side doors enable the driver and passengers to adjust to weather conditions with ease. The 4-zone climate control means the S90 occupants have the best interior air quality at all times. Controlled through touch screen controls on the central dashboard, the climate system even cools the glove compartment, meaning drinks can be cooled here during a drive to the gym or a road trip.

The Convenience Package, which costs $2,550, equips the S90 with a 360-degree surround view camera, which gives a virtual bird’s eye view of the area around the car. A high-resolution image is shown on the Volvo’s center display and is very useful for pulling in and out of tight areas. Also included in the package is HomeLink, a compass on the inner rear view mirror, and park assist pilot and front park assist. The Park Assist Pilot takes over the car’s steering and makes both parallel and perpendicular parking a breeze.

The experience inside the S90 cabin is unparalleled and the large, 12.3-inch digital display does its part, ensuring navigation, phone and other pertinent information is easily accessible. The layout is customizable with four graphic modes and features two big round instruments and one main information display.

Additional upgrades available include a heated steering wheel, which costs $300, and a graphical head up display, which costs $900. It puts the driver’s info onto the windshield and can be adjusted for brightness.

The Bowers and Wilkins Premium sound, a $3,200 upgrade, is nothing short of an audio overhaul to the tune of a 12-channel amplifier and more than 1,400-watt output through 19 separate high-end speakers. With a tweeter-on-top center speaker to reduce reflection from the windshield, the S90 will sound like a concert hall. With three room modes and visible yellow Kevlar speaker cones, the Bowers & Wilkins sound system take the S90 audio experience to another level.

The S90 is equipped with keyless drive and smartphone integration. With the car’s remote control inside the car, the engine can be started by turning the start knob on the tunnel console and pressing the brake. Meanwhile, the smartphone integration means the iPhone or Galaxy interface will pop up on the car’s center display and the driver can easily make calls, play music and navigate other controls. A USB port in the front center armrest means the phone will stay charge and the S90 driver and passengers can listen to the highest quality music.

Volvo is known for its world-class safety features and the S90 offers plenty to rave about. From the Side Impact Protection System and its several grades of steel to protect the car’s occupants from severe impact, to automatic braking in gridlock traffic and advanced cruise control, Volvo takes it safety as seriously as ever.

There are three different tools that ensure S90 doesn’t veer off course and the driver and passengers remain safe.

Collision Avoidance by City Safety is a system created to prevent low-speed collisions. Active from 2.5 mph, it applies brakes automatically and falls back when the driver steers the vehicle or brakes on his or her own.

Using a digital camera to monitor lane markings and track the car’s position on the road, Lane Keeping Aid assists the driver from crossing lanes. This system senses when the driver accidentally crosses lanes and alerts the driver through haptic vibrations in the steering wheel or a warning sound.

With the Pilot Assist-Semi Autonomous Drive System, the S90 provides steering support to keep the car within lane markings and at set speed and distance from the car in front. Pilot Assist is activated from standstill to legal highway speeds and with Adaptive Cruise Control, adjusts to the speed of the car ahead automatically.

Yet another safety feature in the S90 is Road Sign Information, which utilizes a forward camera to determine speed limit and signs such as “no overtaking” or “no entry.” The actual sign  shows up in either the speedometer, the head-up display, or Sensus Navigation in the dashboard console. 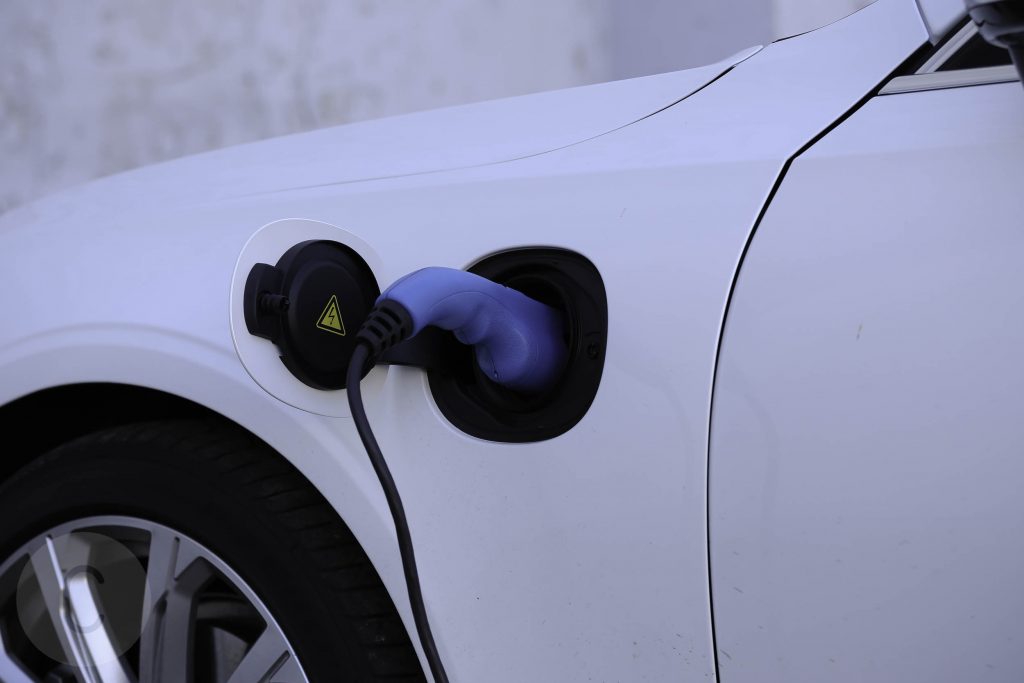 The S90 is rated at 29 mpg combined and at 71 MPGe when powered by the electric motors. Able to drive 21 miles on electric power alone, this luxury hybrid gets the job done and then some.

The 2018 Volvo S90 T8 plug-in hybrid has a formidable and intricate drivetrain. At its heart is a 2.0-liter engine that is direct injected, supercharged and turbocharged. An eight-speed automatic transmission controls the engine, which generates 313 hp and 295 lb.-ft. of torque. It’s essentially the T6 layout, but with Volvo adding 65 kW (87 hp) via electric motor, the new numbers are 400 hp and 472 lb.-ft. of torque. The result is a 0-60 mph time of 4.7 seconds.

Drivers are able to choose among several driving modes. Namely, they are AWD, Pure, Hybrid, Power and Individual. When the battery is at full charge, Pure mode allows the S90 to drive up to 21 miles at up to 78 mph. In our test drive, we often couldn’t keep it from decelerating, thus engaging the gas engine while driving at 55 mph on highways.

In Hybrid mode, the car automatically decides to how to use its powertrain. In Power, our favorite mode, the powertrain offers a heightened throttle reaction and a firmer steering response. There’s several other thoughtful settings at the driver’s disposal, from Charge mode, which enable the engine to recharge the battery pack, and Hold setting that preserves the battery’s power for electric-only driving.

At every turn, the S90 is a smooth ride. Thing is, it’s also ridiculously fast for a luxury sedan. With immediate torque from the 87 hp electric motor supplementing the supercharged and turbocharged four-cylinder engine, the 400 hp total is a lot of power. With 8 forward gears to cycle through, sports performance enthusiasts are going to enjoy the driving experience. It’s more than just an afterthought that the S90 also happens to be a hybrid plug-in, as the electric power directly contributes to the blazing speed.

This is impressive considering the sedan’s dimensions, its 4,085-pound weight and the 116-inch wheelbase. The S90 handles very well, in part thanks to a suspension system controlled via the Driver-Mode switch on the dashboard and also thanks to its solid radial tires, Pirelli P Zero- 245/40R19. From our time with the tester, it’s a sheer joy to drive with the “Power” setting selected; tightened steering response and more rapid throttle reaction are just superb.

What we liked: An undeniably smooth design and luxury interior are on par with the S90’s prodigious fuel economy. It lives up to Volvo’s reputation with amazing safety features and technology. Plus, despite being a hybrid plug-in, this luxury sedan also boasts substantial power and speed.

What we didn’t like: The engine could be more refined, and while the car is powerful and fast, the ride and handling could be more thrilling.

The S90 has a number of worthy challengers, from BMW 5 Series and Lexus GS to Lincoln Continental and Mercedes-Benz E-Class. It lays claim to best-in-segment fuel economy, with the base S90 model getting 22 mpg in the city and 34 mpg on the highway. By contrast, the 5 Series and GS net 16 and 19 mpg in the city, respectively.

The Continental and the E-Class rate at 16 mpg in the city, but see highway miles dip to 27 mpg and 30 mpg. The S90 base price of $48,100 is also several thousand lower than the MSRP of the E-Class and the 5 Series. Price, safety record of the Volvo brand and fuel efficiency aren’t the only highlights of the S90. Its looks, performance and amazing tech/comfort features combine to make it a serious rival to the 5 Series and E-Class.