Back when Bill Clinton denied having ‘sexual relations with that woman’, when Will Smith’s Gettin’ Jiggy Wit It dominated the airwaves, and Lindsey Lohan was oh-so-cute in Parent Trap, Lexus introduced the first luxury crossover SUV, the RX 300. In the years that followed, Lindsey Lohan lost her mind, Hilary Clinton become more influential than her husband, and the luxury crossover market boomed.

Lexus’ 2015 incarnation of the compact luxury crossover – available in either turbocharged (NX 200t) or hybrid (NX 300h) options – is smaller than the RX, and takes the design of a Toyota RAV4 but kicks it into overdrive with a futuristic exterior and enviable engineering.

When the striking Eminent White F SPORT rolled up to the office, we were struck by its super-sporty look and downright sexy grille. If the automotive world introduced a beauty pageant, this gorgeous specimen would have the ‘best-looking compact luxury crossover’ crown in the bag.

With a substantial snout, spindle grille, stylish rear lights and bold L-finesse design (including L-themed headlights), this isn’t your ordinary, boxy, crossover. Indeed, the masculine 200t was expertly engineered to appear carved and styled from a single piece of metal, making it more a work of art than merely a car.

The highest point of the car is set towards the rear of the hood, making light trail touring possible.

As well as loving the outside, the 200t’s interior is possibly the best we’ve ever tested. Ergonomic F SPORT NeLuxe seats lined with red stitching are sublime, with 10-way power driver seat including lumbar support and 8-way power passenger seat. Likewise, the metallic sport trim and F SPORT power tilt/telescopic steering column with paddle shifters and tilt and slide moonroof are functional yet opulent.

Marketed to youthful urbanites, generally women, our Connecticut-based road test editor, Kumar, and contributor Jimmy were unimpressed with the ‘sexist’ internal detachable mirror. Despite not personally appreciating its usefulness, our female friend and eager passenger enjoyed using it during our weekend road trip.

A wide-angled C-pillar maximises storage capacity, and we were pleasantly surprised how much room remained after our luggage – and golf clubs – was negotiated in. Also impressive was the dual zone climate control system with powerful rear vents and touch-sensitive lamp switches in the headliner.

A wealth of tech inclusions both useful and frustrating were included in our test model.

– Qi-compatible wireless charger ($220 dollar option). Unfortunately this charger failed to charge my iPhone 6, my brother’s iPhone 5S, or any iPhone for that matter. My wife’s Nokia Lumia charged like a charm, leaving her to gloat in the detachable mirror and enjoy the car even more than she already did. 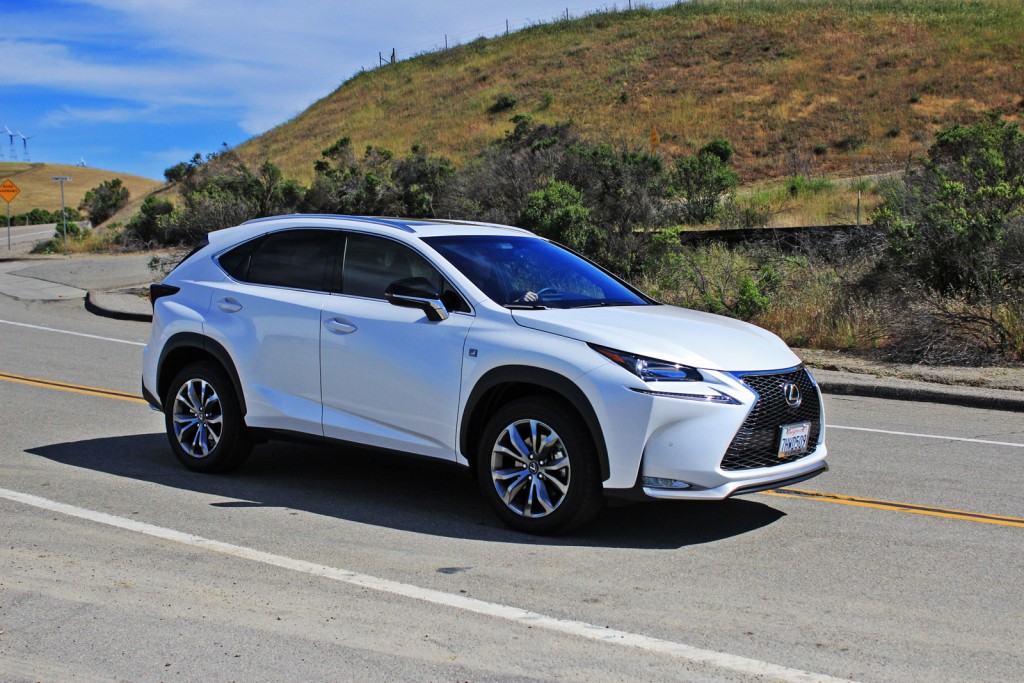 Looks and tech aside, what’s most important are the goings-on under the hood. And there’s quite a lot to talk about due to the inclusion of Lexus’ inaugural 2.0L turbocharged gasoline engine and 6-speed automatic transmission. Torque differential is controlled through a ferocious front axle to produce smooth, stable handling, 235 hp and 258 lb.-ft. torque, much the same as the comparable BMW X3 or Audi Q5.

The intelligent beast does all the number crunching for you via the G-force Artificial Intelligence (G-AI) system, with sensors relaying data to software that analyses steering speed, steering angle, throttle angle and yaw rate, before selecting the optimal gear and downshift pattern through Eco, Normal or Sport modes.

Despite its tendency towards sluggishness when weaving in and out of traffic, both normal and extreme driving conditions were tackled with ease, and there were no complaints when it came to traction, stability and control.

Half a dozen underbody aero panels assist the roof-mounted spoiler to achieve a smooth drag co-efficient (Cd) of 0.33.

EPA estimates are impressive; a projected 22 mpg can be achieved in the city and 28 mpg on the highway. That’s a combined average of 25 mpg, a number slightly higher than our observed average of 21.1 mpg, a figure we were pleasantly surprised with.

The Lexus NX faces immense competition in a saturated market. One sporty crossover that gives the NX a run for its money is the Acura RDX, with loads of safety features and a smooth driving experience. Priced at $35,096, it lacks the flair and features of the more expensive NX (our test model was valued at $43,230).

Another contender – and one of my favourites – is the Audi Q5, with elegance in spades, for the reasonable sum of $39,300.

Also popular is the BMW X3, which ranks as one of the sportiest crossovers next to the NX 200t F SPORT. Touting EPA averages that would make a Prius nervous (not quite), this worthy competitor is the most fuel-efficient in the market and still comes in less than the NX, at $38,500.

Finally, the sleek mini-Mercedes, the Mercedes GLK 350, has comfort for days and two engine options. Plus, it only costs $37,900.

In spite of these cheaper, and admirable, competitors, the NX blows them away and justifies a higher price tag with unbeatable styling. Functionality and performance are complimented by a plethora of positives, including:

Written By
Angel Mosqueda
More from Angel Mosqueda
The Toyota Tacoma has been synonymous with off-roading capabilities, and is already...
Read More
0 replies on “2015 Lexus NX 200t F SPORT”