Oh Lexus, you had us at ‘longer wheelbase’! The 2015 Lexus IS 350 F SPORT stands out in the luxury compact sedan market as a refined and sophisticated choice with a brawny V-6 engine.

Some cynics dismiss the new Lexus IS 350 F SPORT because it fails to keep up with competitors in the speed stakes. We’re not convinced, and guarantee that most potential buyers would be more interested in the vehicle’s comfort and sporty handling, than reaching 60 mph in five seconds rather than six. 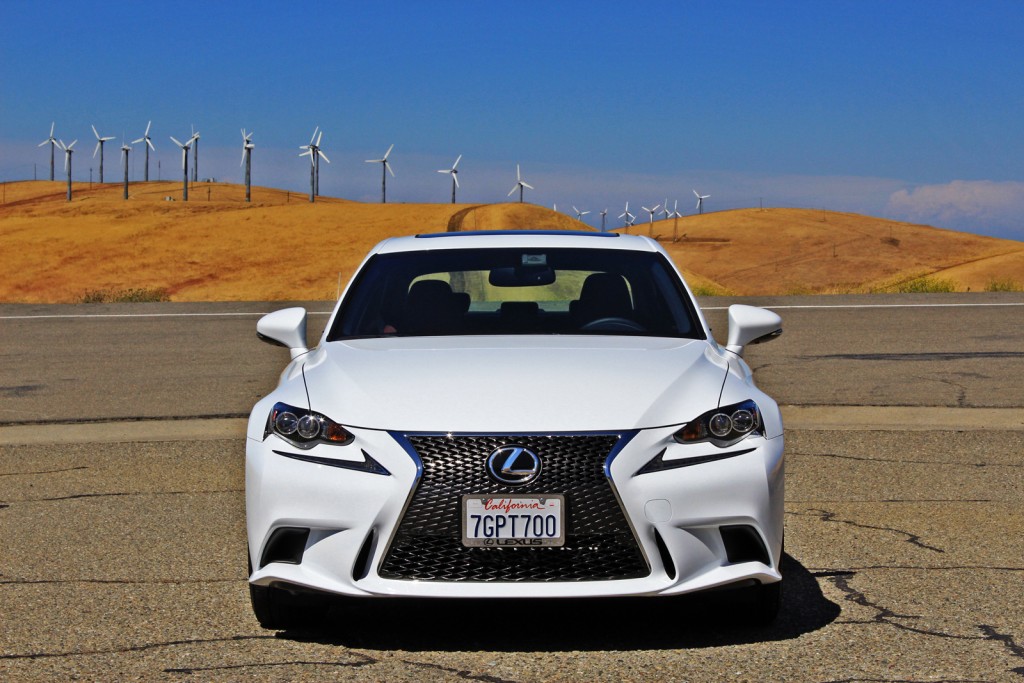 Artists take note: this is what expert craftsmanship looks like. Lexus tout the IS F SPORT as a vehicle designed to stimulate the senses, and our senses resembled those of a 14-year-old boy after being let loose behind the wheel for a week. Well, perhaps not quite so explosive, but eye-popping certainly occurred when we caught sight of the full-faced mesh spindle grille. The 3D design with chrome-plated frame and charcoal insert background complimented the exterior’s Ultra White color perfectly. The beefy cooling ducts and altered front bumper were also highlights. Likewise, 18-inch F SPORT split 5-spoke wheels (taken from the Lexus LFA supercar, if you don’t mind!) were a welcome upgrade from the standard 17-inch option.

The 350s HID headlamps with low and high beams and LED daytime running lights do more than put stars in our eyes, they turn heads and increase visibility to such an extent that you’ll notice every spec of dirt on the road.

Taking to heart the motto that ‘bigger is better’, Lexus have increased the wheelbase by adding three inches to the width and almost half an inch to the length, making for a domineering looking compact sedan. 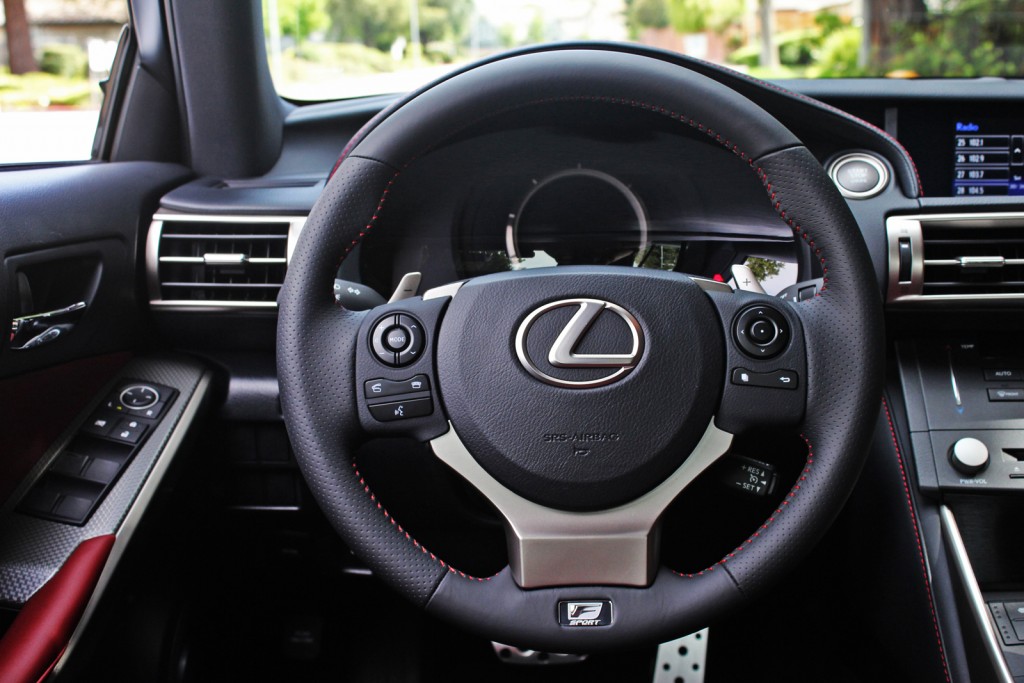 Move over eyeballs, touch and smell have their chance to be indulged inside the IS 350 F SPORT. Treat fingertips to the almost silken leathery touch of the padded sides and center console, or sleek silver metallic trim and illuminated analog clock.

Let the aroma of luxury (i.e. brand new, top quality materials) waft over you while reclining in the bolstered heated and ventilated driver or front passenger seats, which were expertly designed to keep you firmly panted during high-G turns.

Enjoy the driver-oriented cockpit inspired by the aforementioned supercar and let your hands slid over the power tilt-and-telescoping steering wheel and shift knob trimmed in perforated leather. Slip off those shoes and let your toes fondle the sports pedals that come exclusive with the Rioja Red NuLuxe trim. From the front seat, admire the divided dashboard that incorporates a display zone and an operation zone for functional and user-friendly control.

Also noteworthy, and one of my favourite features, was the LFA-inspired gauges with Thin Film Transistor display. To the untrained eye, they appear identical to the LFAs, and add to the sense of sportiness to an already athletic interior. A sliding metallic-trimmed bezel joins the setup, expanding or retracting the screen after info has been retrieved – very futuristic! 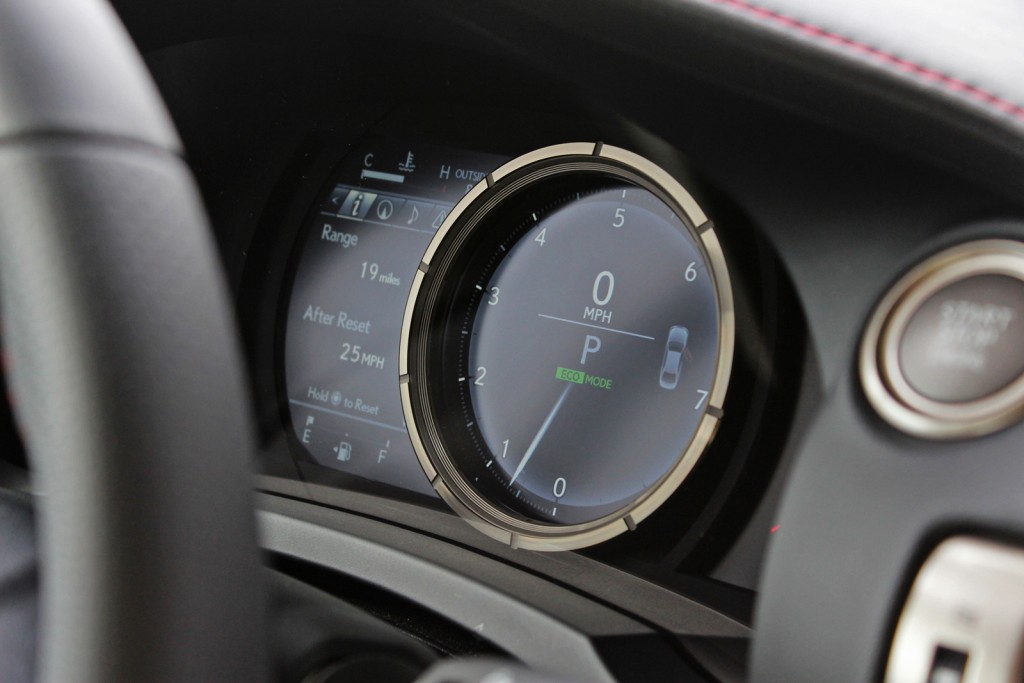 A power tilt/slide moonroof is useful, as is an auto-dimming rearview mirror with homelink garage door opener. Thanks to the longer wheelbase and innovative front seat architecture, an extra 1.6 inches has been added to the 60:40 split-fold rear seating.

On the highway you’re looking at 28 mpg, while in the city a more subdued 19 mpg is expected, for an overall 22 mpg combined. Our stats revealed an average of 20 mpg after a week on the road and we can already hear the ‘gas misers’ moaning over their hybrids and prattling on about Lexus’ stain on the environment. Well, don’t get your organic bamboo knickers in a knot and take a look at the 2015 Lexus ES 300h instead. We’re currently testing the 300h, which averages a whopping 40 mpg in the city and 39 mpg on the highway. 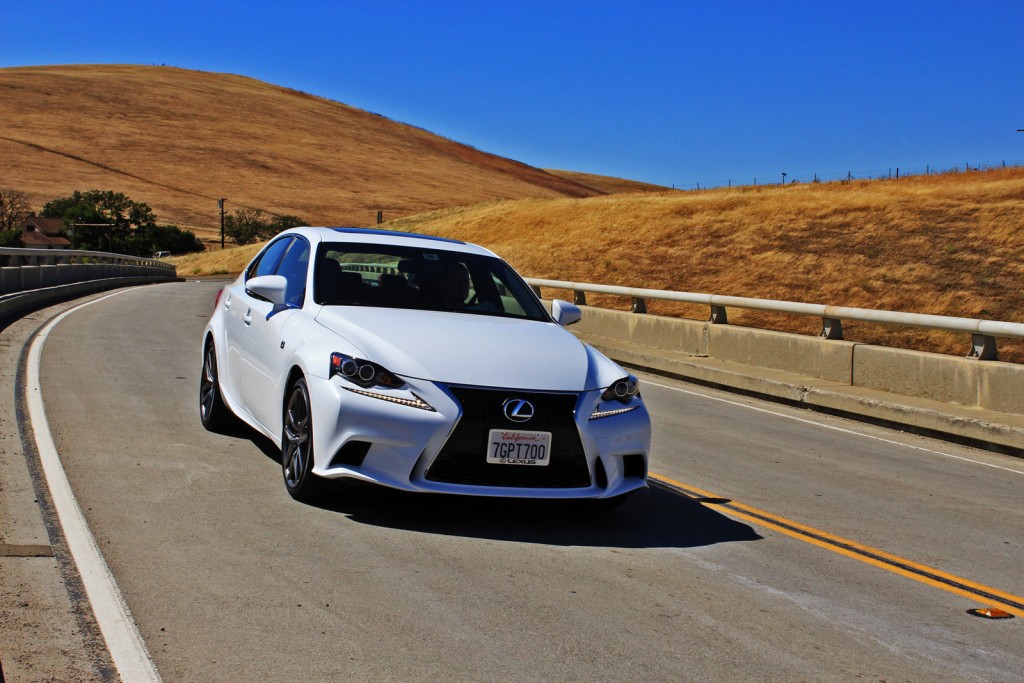 A 3.5-liter V-6 engine with Aisin’s new 8-speed auto transmission is a joy to wield and pushes the sedan from 0-60 mph in around 5.6 seconds. Dual overhead camshaft, direct & port injection and variable valve timing round out the equation. And what do you get for all that? As well as a lively, yet composed drive experience, you’ll be able to achieve 306 hp and 277 lb.-ft. of torque.

Not all luxury sedan drivers are interested in pushing their new car to its limits, but if you do feel inclined to exercise your lead foot, expect adrenalin-inducing results via the F SPORT-tuned adaptive variable suspension plus Variable Gear-Ratio Steering that come standard with the RWD model. A satisfying ‘throaty note’ accompanies the naturally-aspirated engine, particularly during higher rpms.

Where the old IS performed lackadaisically, the new model is sharp as a tack; corners and acceleration are optimized through the transmission’s automatically altered shift points. 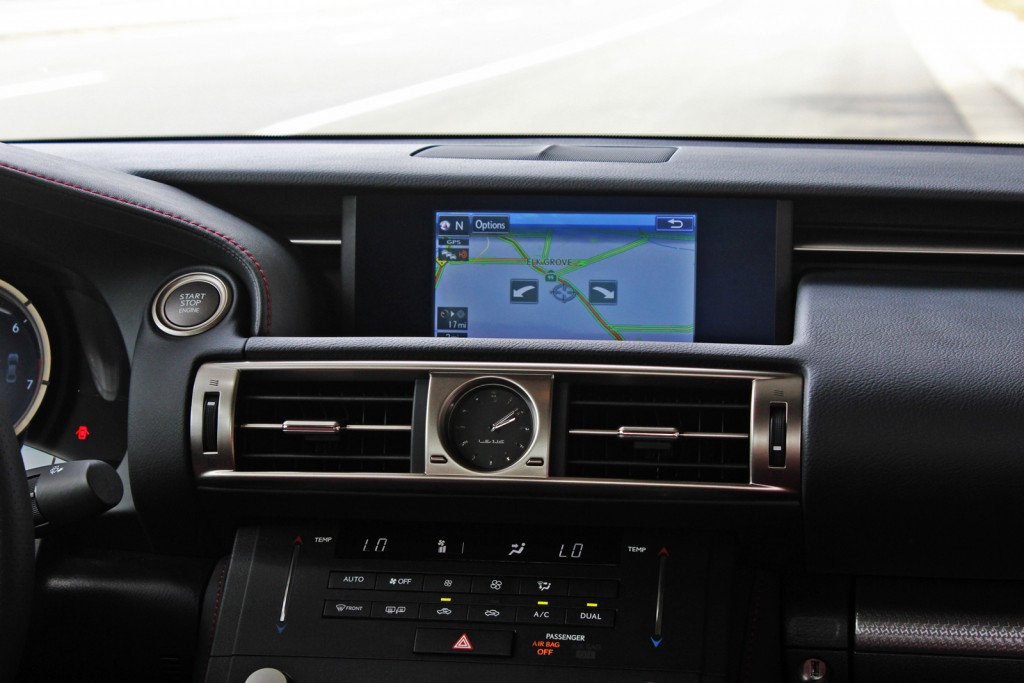 Some standout features include Lexus Enform Safety Connect with automatic collision notification, stolen vehicle location and emergency assist button. We also loved the smart access function with push-button to start and stop.
The 4.2-inch Multi Information Display was a tech highlight as it encompassed a full-color display to bring up audio, phone, temperature and trip information.

Our only concern in terms of technology was the navigation system with Remote Touch Interface (RTI) and Enform App Suite. The controller used is reminiscent of a computer mouse and takes some getting used to. I found myself spending more time with my eyes on the controller than I felt comfortable with, but as the week went on this became less of an issue.

It probably goes without saying that Bluetooth hands free phone and audio streaming make an appearance, assisted by the impressive Lexus Premium Display Audi System HD Radio with real-time traffic and weather, album art, mp3 player, USB integration, CD input for the old school crew, and SiriusXM satellite radio with a 3-month complimentary trial. All this is useless without a decent sound system and Lexus treats drivers to the new and improved Mark Levinson Premium Surround System. The setup’s wide dispersion and inverted motor structure merge with 15 speakers and 835-watts for a concert-like experience.

Even the dual-zone climate control outfit gets a tech upgrade and is now activated by touch-sensitive electrostatic switches.

Also popping its head up and hoping for attention is Siri Eyes Free mode, which is compatible with some iPhones and makes keeping in touch while behind the wheel safe and easy.

In terms of competition the IS 350 has many. BMWs 328i is a worthy opponent, more so than the 335i, when considering performance and price tag. In fact, the IS 350 costs just less than the similar 328i M Sport, but offers far more luxury and refinement, and exuberant acceleration and handling.

A more expensive choice is the Mercedes C300, but this too fails to provide the grunt of the IS 350.

The Audi A4 ranks as the closest rival when considering price alone. Both will set you back almost the same amount, but the Audi loses its even footing in the power department. Meanwhile Volvo’s S60 is the discount option, but both competitors suffer from heavy front ends and lack the exhilarating drive experience of the IS 350.

The Infiniti Q50, despite it lack of notoriety in the luxury market, is an affordable competitor that would beat the IS 350 in a drag race. Likewise, Infiniti’s hybrid alternative is even quicker, costs $2000 less than our test car, and conserves fuel like a camel holds water.

However, we can’t help but dismiss the competitors as wannabes. Good value and phenomenal response and cornering make the well-rounded IS 350 very hard to beat despite its less than inspiring 0-60 mph time.