An aggressive sedan with looks and power to match

Despite the fact the new and improved 2016 model GS (with revised spindle grille and headlights, plus increased horsepower and torque) was unveiled in August, we were lucky enough to test-drive the next best thing this week when the 2015 Lexus GS 350 F SPORT arrived in our driveway. Lexus’ GS mid-size luxury sedans – all four generations – are designed with performance in mind, slotting comfortable between the entry-level IS and flagship LS.

With curves in all the right places, this four-door is runway-ready-sexy and we’re of the opinion that it looks even better than the new Lexus IS. Hell, we’ll just say it: this is the most attractive sedan on the market right now. The new Lexus spindle grille may have something to do with it, and the sculpted lines rival those of Michelangelo’s David and are equally recognizable. It’s as though the sheet-metal were a living, breathing being, perfectly wrapping itself around the car’s skeleton.

Our tester came in Atomic Silver with the $4,825 F SPORT package, which bestowed on the car some masculine – and exclusive – staggered 19-inch split five-spoke alloy wheels with dark graphite finish. The rear wheels are actually 13 per cent wider than the front for greater traction and handling, and summer tires complete the equation.

Leading the charge at the front of the car is the F SPORT spoiler, upper and lower grille inserts and a whole bunch of lighting; there’s LED daytime running lamps (and dynamic auto-leveling) and HID headlamps including fog-lamps.

Out back there’s a stylish rear valence and lip spoiler, plus one-touch power trunk ($400 extra). Once you take in the whole picture – the aggressive grille, sleek sides, and stylish rear – you’ll understand why we praise the appearance of the 2015 Lexus GS 350 F SPORT so highly. And just wait till you see inside!

Two words: absolutely stunning! That’s pretty much all you need to know about the interior of the GS 350 F SPORT, but we’ll indulge you with some details nonetheless. Our tester’s interior was equal parts luxurious and convenient and came in Flaxen Leather with Striated Aluminum trim. From the moment of entry, it was obvious the materials Lexus had sourced were a step ahead of those found in previous incarnations.

Aggressive, bold and potent, the cabin looks as though it’s ready for the racetrack and had a number of F SPORT details including the 16-way (heated and ventilated) adjustable F Sport Driver’s Seat, which not only comprised power side bolsters, but four-way lumbar support and thigh support for optimal comfort. F SPORT insignia also graces the steering wheel and shift knob, both of which are outlined in perforated leather.

Offsetting the plush leather are a number of striated aluminum accents and an attention-grabbing black headliner, but we particularly admired the aluminium sport pedals, which added to the car’s sense of performance. Rather than just sensing performance, Lexus have ensured unwanted factors such as glare don’t detract from the car’s potential. I kept the power rear-window sunshades down for most of my test week, but even when I forgot, it was great that the shade temporarily – and automatically – lowered when the car was reversing. The cabin’s ambient lighting was a nice touch, and illuminated the display screen and gauges without being ostentatious. 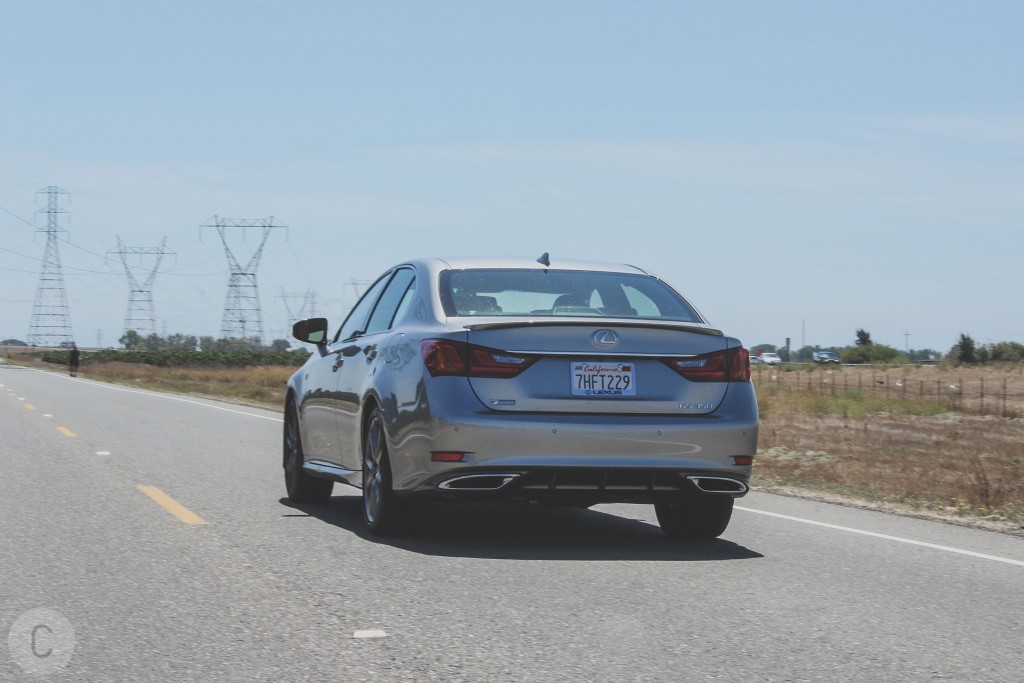 The EPA numbers on this brute of a car were pleasantly surprising, and since we weren’t driving a Volkswagen, we can only assume the numbers haven’t been tampered with! Results show the Lexus capable of attaining 19 mpg in the city and 29 mpg on the highway for a combined average of 23 mpg. From our results, these figures are certainly attainable, especially when driving in Eco mode. 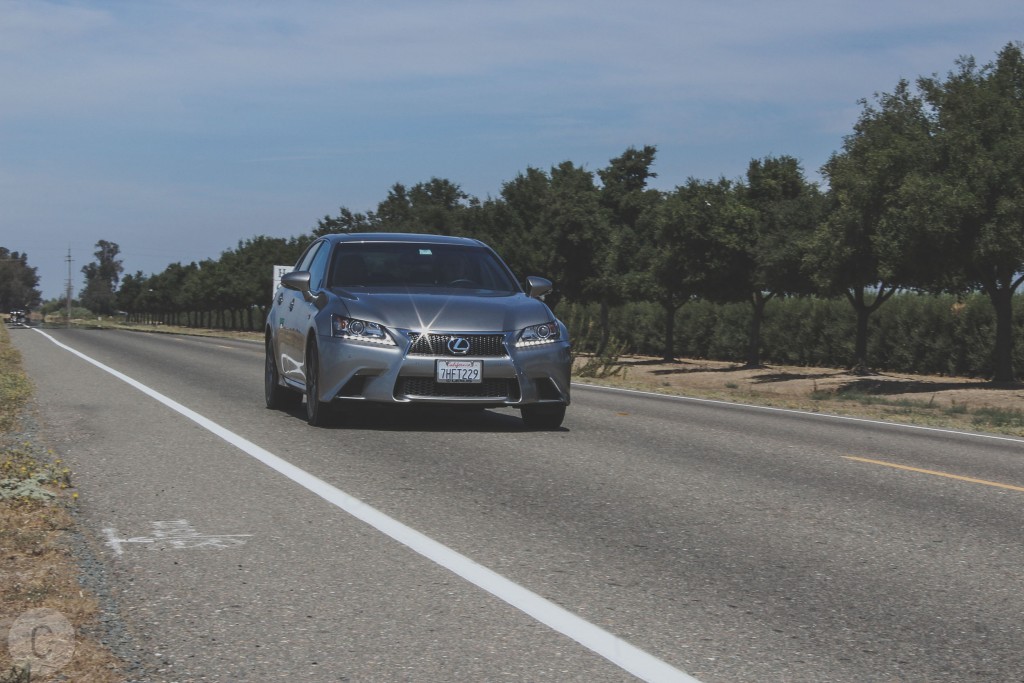 More horsepower … more grunt? The GS 350 F SPORT has plenty of both. The 3.5-liter V-6 (with port and direct injection) sounds like the LFA, and performs almost as well. While it may be the same unit found in the standard GS, software upgrades have given the F SPORT an obvious, and substantial, edge. The 0-60 sprint is covered in just 5.7 seconds, horsepower gets as high as 306 and the dual VVT-i sees torque skyrocket – even when cruising at slower speeds.

The spirited 8-speed transmission is quick-shifting and fast-talking. When Manual mode is selected, sequential-shift automatic transmission can be controlled via paddle shifters, which were great fun to trial, and simple to master.

Gear changes were so seamless I rarely felt them, and this can be attributed to the car’s automatic increase in engine speed while manually downshifting, allowing the throttle to produce quicker, velvety, gear changes.

The adaptive variable suspension (AVS) is track-tuned and tight! Developed in conjunction with the masterminds behind the LFA supercar, this baby caresses the road like a gentle lover, and whips around bends faster than Usain Bolt. The ideal combination of brains and brawn, the suspension monitors and adjusts individual wheel settings for optimal performance no matter the Drive Mode selected and external factors including road surface conditions. Smarter still is the F SPORT tuning and aluminum components with optimized bushings. These factors produce superior steering with minimal lean, and together with the Dynamic Handling System, the car was so responsive and intuitive it felt like an extension of my body. And a damn fine extension it is!

With so much power, a reliable braking system is vital and Lexus have installed oversized 14-inch, two-piece front brake rotors with four-piston calipers to effectively decrease unsprung weight while yielding enhanced cooling to guard against brake fade.

Four driving modes are on offer: the Sport S/S+ (which we spent most of our time in), Normal, ECO and EV varieties. The Sport S/S+ software allowed for sharper shift points, taut suspension and sport steering that responded to my requests before I even knew I was going to make them. Not to mention the gauge clusters that turn red when Sport mode is selected. The staggered width wheels also prove their worth by applying impenetrable traction around bends. Assisted by dynamic rear steering, the extreme power never felt overwhelming. 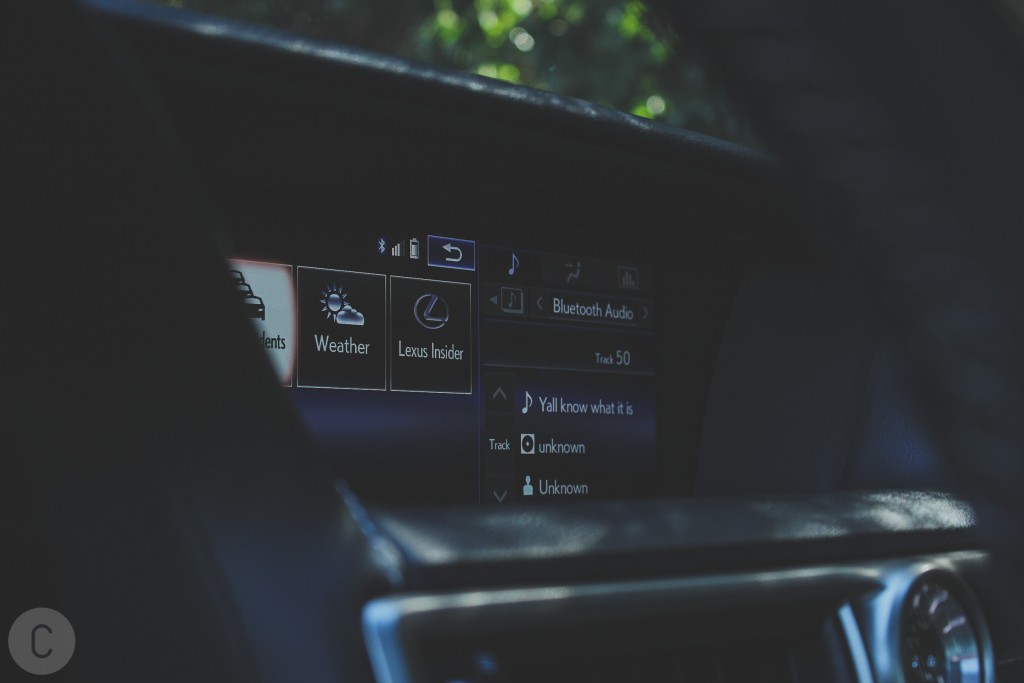 Whenever you’re behind the wheel of a powerful car, it’s important to take stock of its safety features. In this case, we received a few extras added to our F SPORT, from the $700 Blind Spot Monitor with power-folding exterior mirrors to the $500 Intuitive Park Assist, I always felt safe behind the wheel. In fact, the Safety Connect system, with a 1-year subscription to Enhanced Roadside Assistance, left me feeling invincible. Likewise, the Vehicle Dynamics Integrated Management was bursting with helpful features including Vehicle Stability Control and Traction Control – indispensable on a car as powerful as this. I was also excited to see the car hadn’t been invoiced for the backup camera, which comes standard.

A new multimedia system has entered the Lexus scene, and we’re impressed! Accessed from the high-resolution 12.3-inch multimedia display screen, it welcomes HD radio, Bluetooth, auto book transfer, and vehicle info display. Siri Eyes Free Mode was up-to-date and had no trouble synching with my iPhone 5S, and a friend’s iPhone 6 Plus.

I’ve used Lexus Enform a few times, so I know how reliable and comprehensive the outfit is, and this upgraded system was no different. Everything you could want is here: 24-hour navigation assistance through Enform Destinations, Enform Safety Connect, mobile app integration and remote mobile app (to start the engine and view stats). A DJ friend of mine came along for a ride during my test week and commented on how good the Mark Levinson Premium Audio System ($1,380) was, enhanced by two midwoofers, two high-efficiency woofers and one 250-mm double opposing magnet subwoofer.

With an 835-watt Class D amplifier and 17 speakers, there was no escaping his pulsing tunes. The dual 25-mm titanium dome tweeters eradicated any distortion and sounded so clear I could have sworn I was in a sweaty nightclub at 3 am. Luckily the bolstered driver’s seat brought me back to reality. If your attention does wander, or god forbid you fall asleep, Lexus have introduced a few features to save your life.

Looking at the competition, it’s hard to beat BMW’s stable of terrific turbo sixes – particularly the M5 – but the software upgrades in the Lexus GS 350 SPORT S may just tip it over to the winner’s circle. If you want a more all-American sedan, you could opt for the cheaper Cadillac CTS that guzzles more fuel than the Lexus, but still looks good and performs well. The front-wheel-drive Audi A6, on the other hand, doesn’t quite make the grade, and we’d be more inclined to consider an Infiniti. The Infiniti Q70 comes closest to knocking the GS 350 S SPORT out of contention, with outstanding handling and performance, and a throaty V-6 engine.

While all these competitors may be great in their own right, we’re loving the software upgrades and sharp response of the Lexus, and for these reasons (and so many more) the GS 350 F SPORT sits at the top of our sedan wishlist.