The Subaru Legacy is celebrating 25 years of automotive supremacy, and to mark the milestone the Japanese carmaker has released the 2015 Legacy in three trim levels; the base 2.5i, midrange 2.5i Premium (our test car), and Limited 2.5i and 3.6R. As the brand’s longest standing model, the Legacy AWD vehicle has been poaching consumers from the midsize sedan and wagon markets for years.

Why has this modest people mover remained so popular?

The car’s unconventional character meant it struggled early on to compete with the likes of the Camry and Accord. But the Legacy gave up playing second fiddle to these bigger names when they made the cabin larger and more comfortable, while simultaneously improving fuel economy.

This year, Subaru have stepped things up a notch with the sixth generation 2015 Subaru Legacy. Things may not seem very different to the naked eye, but once you scratch the surface a plethora of new features become apparent.

Jump in the passenger seat as we test drive Subaru’s new baby and determine whether the upgrades are worth the extra dosh. 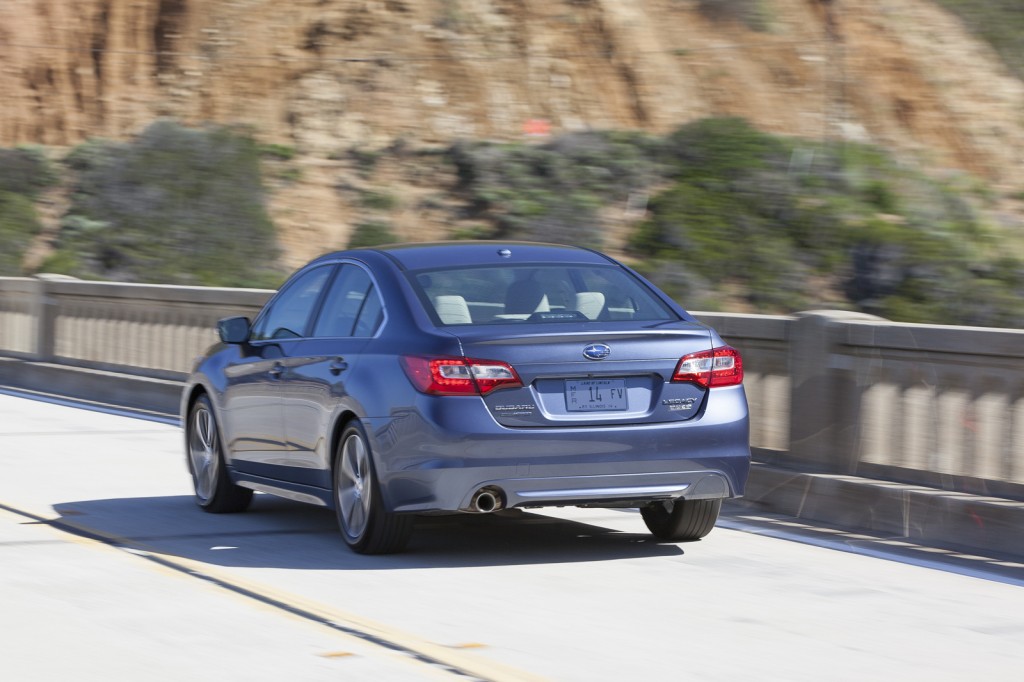 When compared against its closest sibling, the fifth generation Legacy, this year’s model is bigger and more angular. Our Legacy 2.5i Premium model was overlaid with a sleek Twilight Blue Metallic paint job and came equipped with 17-inch wheels (standard on the 2.5i and 2.5i Premium models). Similar in appearance to the Legacy Concept, it’s sportier than ever while still exuding an air of functionality.

An innovative new front fascia with hexagonal grille and bumper can be thanked for the edgy look, which introduces a standard Active Grille Shutter system for substantially reduced wind resistance when set to the closed position.

The windshield received a facelift, too. Reworked to sit 2 inches forward at the base, it is sandwiched by door-mounted side view (and heated) mirrors with turn signals built-in. Around the back, U-shaped taillights and brake lights shine with LED technology to create a streamlined effect that reduces power consumption. 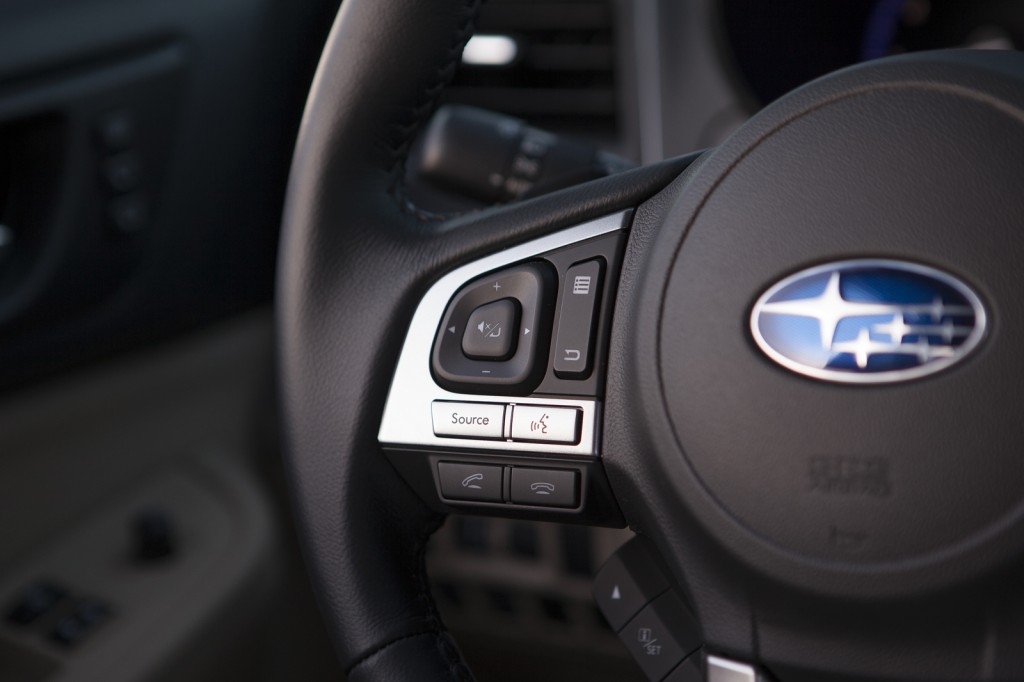 The most noticeable change once inside is the quiet cabin, much quieter than any Legacy to come before. Why so silent? The new acoustic windshield and liquid-filled engine mounts may have something to do with it, along with bulkier panels, insulation foam and other magic materials concocted in a fancy lab somewhere.

Also obvious is the roominess. Indeed, the 2015 model outdoes all competition in the midsize segment with the largest cabin space. We couldn’t help noticing the generous space around the shoulders and hips, not to mention the legroom, which measures 38.1 inches in the rear where 60/40 split fold-down seats, with dual-mode heating, preside.

Behind the wheel we found illuminated sporty binocular-style gauge pods that support the LCD info display. An Eco gauge helps monitor fuel consumption and assists in identifying and improving negative driving tendencies. The trunk is also bigger but the soft-touch materials weren’t as soft as we expected.

The denser cushioning around armrests and the center console were designed to make the cabin feel more luxurious, and while they are an upgrade from previous models, some aspects – like the perforated leather upholstery – felt slightly cheap.

Overall, though, the experience inside the Legacy was pleasing and the one-touch lane change indicator was a nice addition. The 10-way power driver seat is another highlight, with trappings like power lumbar support adjustment and power heating. Our All-Weather package came with the benefits of dual-zone automatic climate control and windshield de-icer. 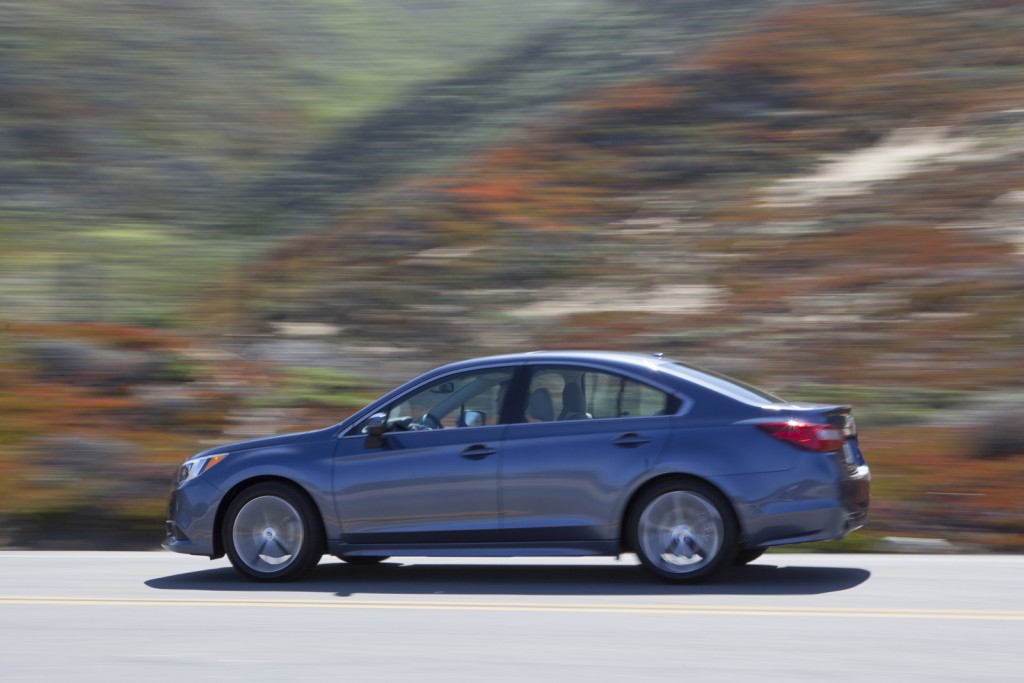 It’s not the most spirited engine around, but for the price tag not a lot can be expected. The upgraded torque-vectoring, which exerts brake pressure to the inside front wheels, lends an agile note to proceedings as it transfers power from front to rear and leaves winding roads in its wake without a hitch. Electric power steering is sufficient and doesn’t wander off centee very often, or noticeably.

The car’s aluminum hood helps keep weight off the front wheels and ensures steering response is always spot on. Handling was especially enjoyable when the transmission was in manual mode, and the attractive wheels enabled sure-footed cornering.

Focusing on the all-wheel-drive system, the Legacy is equipped with symmetrical AWD, making traction sturdy even during wet conditions when the system’s intuition kicks in to keep the wheels spinning at optimum capacity.

With all the supplementary padding stuffed into the car’s interior, bumps and potholes are taken with ease and barely felt. The engine, too, is quiet, but acceleration is less than impressive.

Family-friendly fuel economy is assured with the EPA rating the Legacy at 26 mpg on city streets, 36 mpg on the highway and 30 mpg combined. We observed an impressive 28-mpg. These numbers were made possible due to our tester being a Partial Zero Emissions Vehicle (PZEV), which surpasses California’s stringent emissions standards to offer lower emissions than some hybrids or alternative fuel cars. Add to this a 10% improvement in aerodynamic efficiency, and your hip pocket – and the environment – will be thanking you. 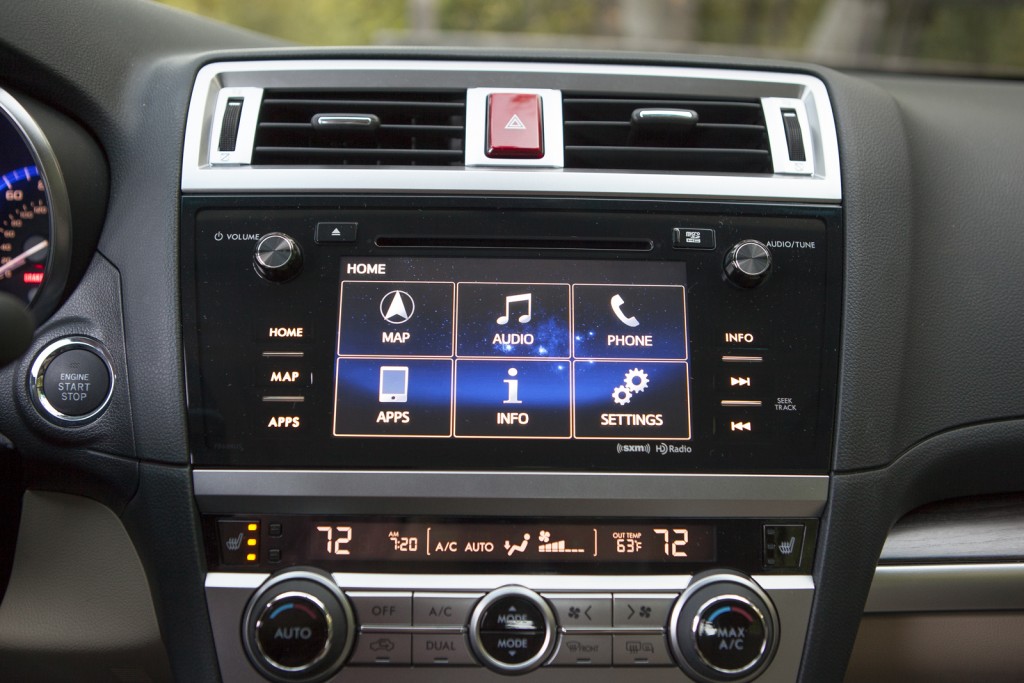 But wait, there’s more! Cruise with confidence using the rear vehicle detection system, blind spot detection, rear cross traffic alert and lane change assist. Our test week was spent on busy city streets, so these features were indispensible. The rear-view camera uses Subaru’s exclusive stereo camera technology and is now centered in the middle of the car for accurate imaging.

Subaru never rest on their safety laurels. The proof? An improved airbag system is a good place to start. Those riding shotgun are protected by no fewer than eight airbags and all passengers are guarded by the high tensile steel ring-shaped reinforcement frame within the cabin.

Keyless/PIN access and start is thrown in to the mix for good measure, and steering-responsive fog lamps break through even the thickest smoke or haze. Plus, Subaru has incorporated Vehicle Dynamic Control, ABS brakes, Electronic Brake-force Distribution, and Brake Assist for unexpected situations.

All this safety has led to the Legacy being awarded the highest-rated front crash prevention system for the second year running by the Insurance Institute for Highway Safety, a characteristic that will no doubt excite potential buyers with young families.

The upgraded infotainment system is controlled via a 7-inch multi-function touch screen. Here’s what you get:
Info/Navigation

Despite a few low points, the Legacy is a good car, though not quite as enjoyable as previous incarnations of the model. Sure, it’s roomier and more fuel efficient, but it lacked the snappy, interactive personality established by the fourth generation Legacy. Despite the fact its audio and navigation systems are now significantly outdated and the ride quality felt overly firm at times, we still recommend this vehicle to anyone in the market for a used midsized sedan or wagon that performs well in all seasons, posts enviable EPA numbers and injects a dose of fun and driving flair to the experience. For those who prefer a brand new car, award-winning safety features and innovative tech, the 2015 Legacy cannot be beaten.