Car names can get so confusing. And for my tester this week, you may need to take notes during this review. There used to be a compact Acura called the TSX and a mid-size sedan called the TL. Those are now gone and replaced with my tester for the week – the 2015 Acura TLX.

Not only did Acura combine the names of these two vehicles, but they also combined some of the assets of each car to make one updated, more appealing entry-level Acura. Think of the TLX as the starter vehicle for Acura. If you’ve owned a Honda in the past and are ready for a little more luxury, this is now a viable option for you. And, best of all, the TLX is priced around the same price as some Accords.

On size and length, the TLX splits the difference between the TSX and the TL. However, interior space does not seem sacrificed from the TL to the TLX, so the minor engineering tweaks in length works for this sedan. Honda’s engineers always design vehicles with passenger comfort in mind, and that certainly applies to the TLX. 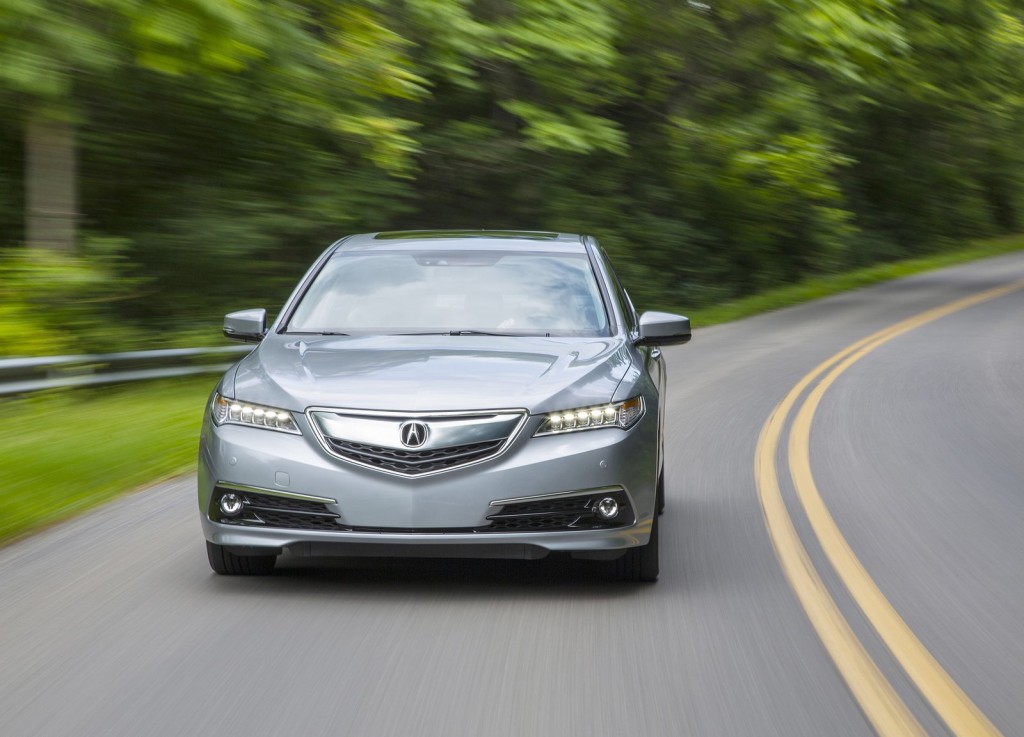 On looks, the TLX looks like most other Acuras. It has the “beak-like” front end with the typical Acura grille prominently on the front end. Subtle design features give it a modern, updated look including flared side door panels which lead to an underwhelming back end. The Jewel LED headlights really accentuate the TLX giving it nice distinction at night, and making it quite appealing during night time driving.

Subtle design features give it a modern, updated look including flared side door panels which lead to an underwhelming back end.

Two engine options exist for the TLX. A 2.4-liter, 4-cylinder engine makes 206 horsepower while the 3.5-liter V-6 produces 290 horsepower. It’s the V-6 engine that most Acura fans and potential consumers will flock to as it’s the closest thing to the TL engine. My tester was the less-powerful 2.4-liter engine, which lacked a turbo boost. It definitely could’ve used that boost as the smaller engine feels underpowered off the line and on the highway.

In most driving conditions, however, the 2.4-liter engine will provide ample performance. Front-wheel drive is offered on this engine, while an optional all-wheel drive is a feature for the V-6 engine. 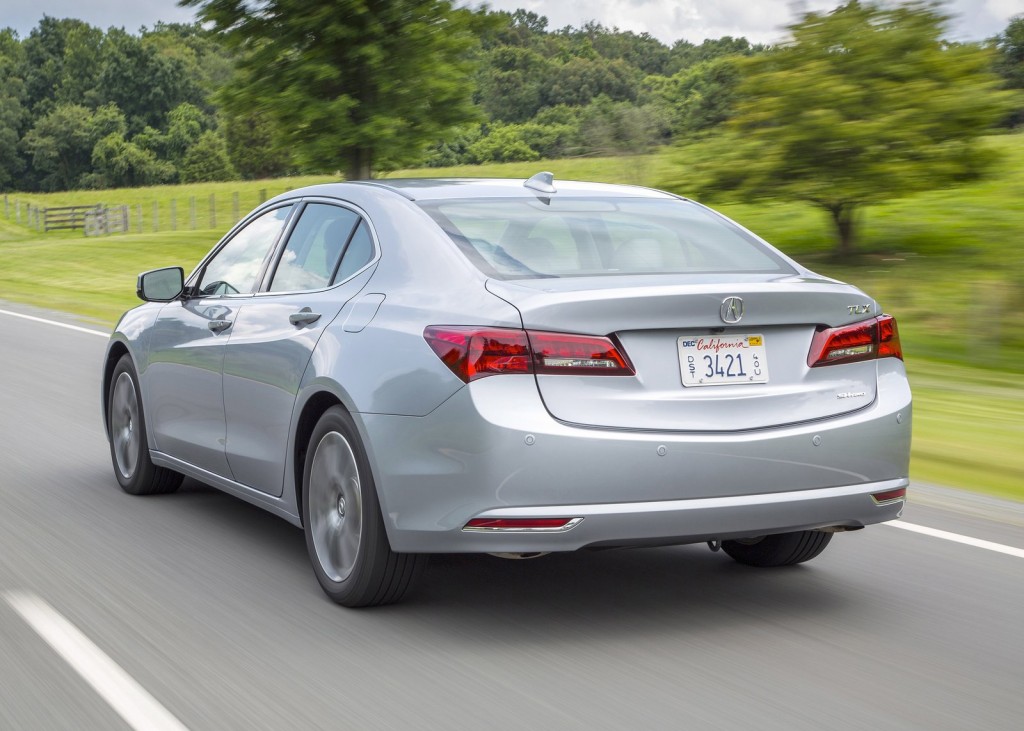 In all fairness, I believe I would enjoy the V-6 engine much better than the 4-cylinder. The quirkiness of the transmission paired with the underwhelming power production was not what I generally accept from Acura.

In all fairness, I believe I would enjoy the V-6 engine much better than the 4-cylinder.

However, the interior of the TLX does not disappoint. The TLX is much more than just a glorified Honda. Plush seats offer extreme comfort, including for rear passengers. Rear legroom and head room are impressive (considering it’s decreased size from the TL). The TLX feels nicer than the either the TSX or TL ever did (I drove both). 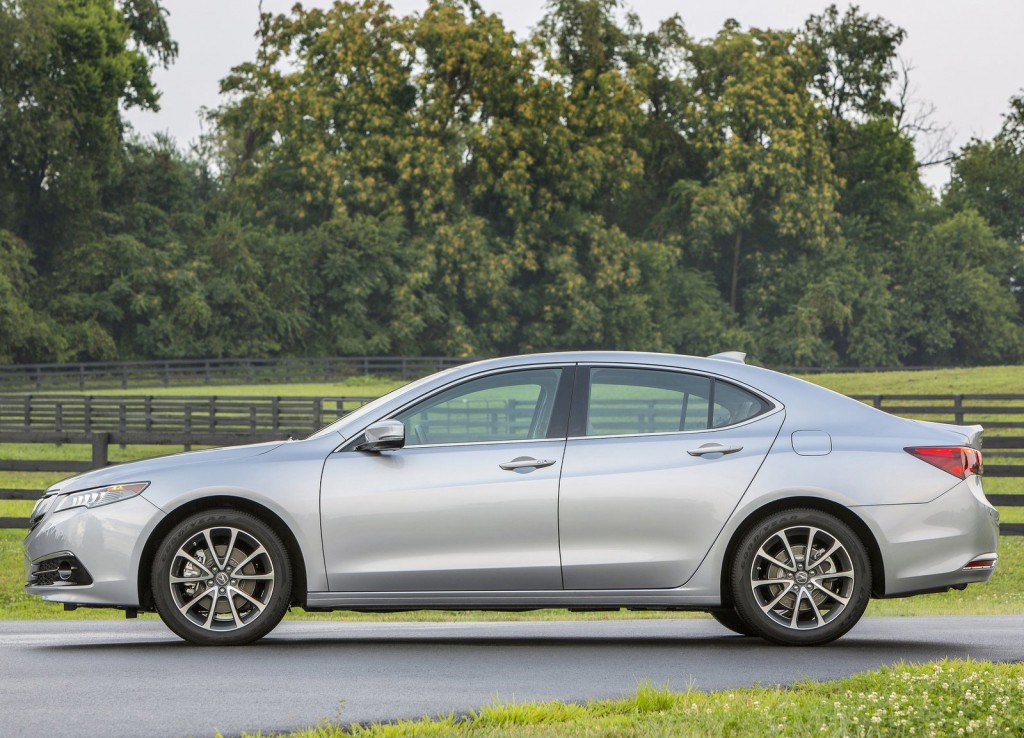 The cabin is whisper soft with little to no road noise easing in. This is one area where the Acura is significantly than its Honda brethren.

The cabin is whisper soft with little to no road noise easing in.

The TLX has ample technology, considering the price tag. The Tech Package adds blind spot monitoring, forward collision warning, lane assist and rain sensing wipers. One of the neatest features is the voice activated commands known as Siri Eyes. It integrated smoothly with my iPhone where I was able to communicate with my phone by sending hands-free text messages.

Honda claims a seven percent increase in fuel economy for their fleet with the TLX. It has better fuel economy than the TL and can boast an EPA rating of 24 mpg/city and 35 mpg/highway. In a week’s worth of mostly city driving I sipped only a half tank of fuel at a rate of 29 mpg.

There’s really only one trim offering for the TLX. By adding either the Technology Package or the Advanced Package to the base trim, you get three available trim offerings. My tester was the Tech version. 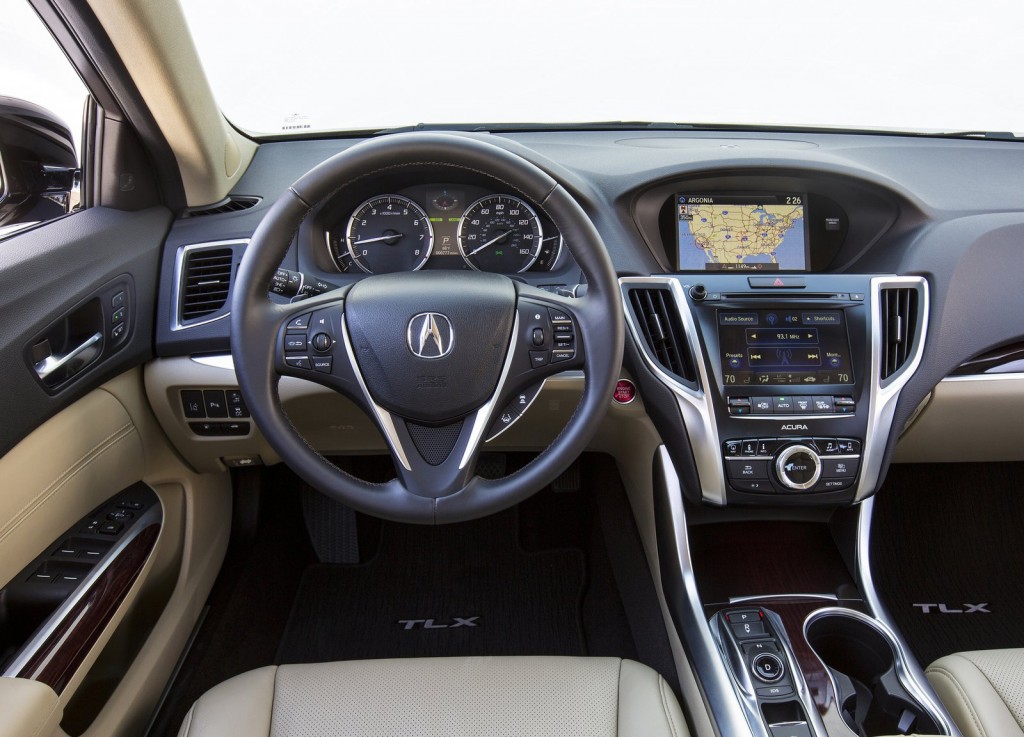 Price for the TLX Tech with the 2.4-liter engine is $35, 920. The base model TLX comes in with an even lower price tag making this Acura truly an entry-level luxury sedan.

Without having to sacrifice much, you can own a luxury sedan that is quiet and comfortable.

And therein lies the appeal of the TLX. Without having to sacrifice much, you can own a luxury sedan that is quiet and comfortable. The 2015 Acura TLX replaces a few vehicles in the product line, and is ready to make a splash as a viable, entry-level luxury sedan.