In the animal world, the Jaguar is a solitary hunter – a loner in the jungle. The same can be said for the Jaguar brand within the automotive world. In the luxury vehicle jungle, Jaguar is content to do its thing, without following suit of the other nameplates in the segment.

My tester this week proves just that. The 2015 Jaguar XJL is a luxury sedan that can certainly be compared to its German competitors or even the Japanese brands, but really, the XJL is a sedan that lurks confidently on the streets of the urban jungle. 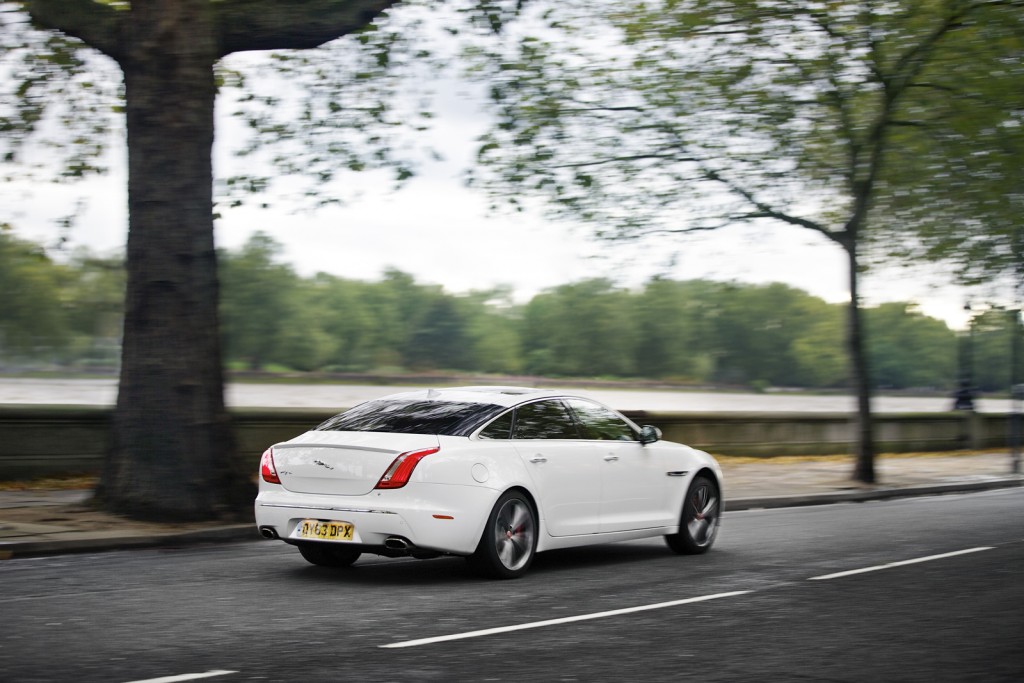 The XJL has eye-catching looks. In the luxury segment, some cars blend together, but the XJL is bold, and distinctively Jaguar. What that means is it doesn’t shy away from its bold, luxurious appearance, rather the XJL embraces that boldness with an aggressive yet refined exterior. And because of its bigger dimensions, the XJL looks long (that is what the L stands for its name afterall).

It lives up to that nomenclature with an extra long front end. A simple, almost understated grille gets lost proportionally on the front end of the XJL. The long front end is highlighted by stylized indentations on the hood. The only thing that could make it better is if Jaguar brought back the hood ornament and let it perch proudly on the hood, as if standing guard ready to pounce.

Away from the hood, the XJL shortens up. A small C-pillar area and back end also contributes to the front-heavy appearance of the all-wheel drive XJL. LED tail lights are downright sexy and give the XJL a gorgeous appearance at night. 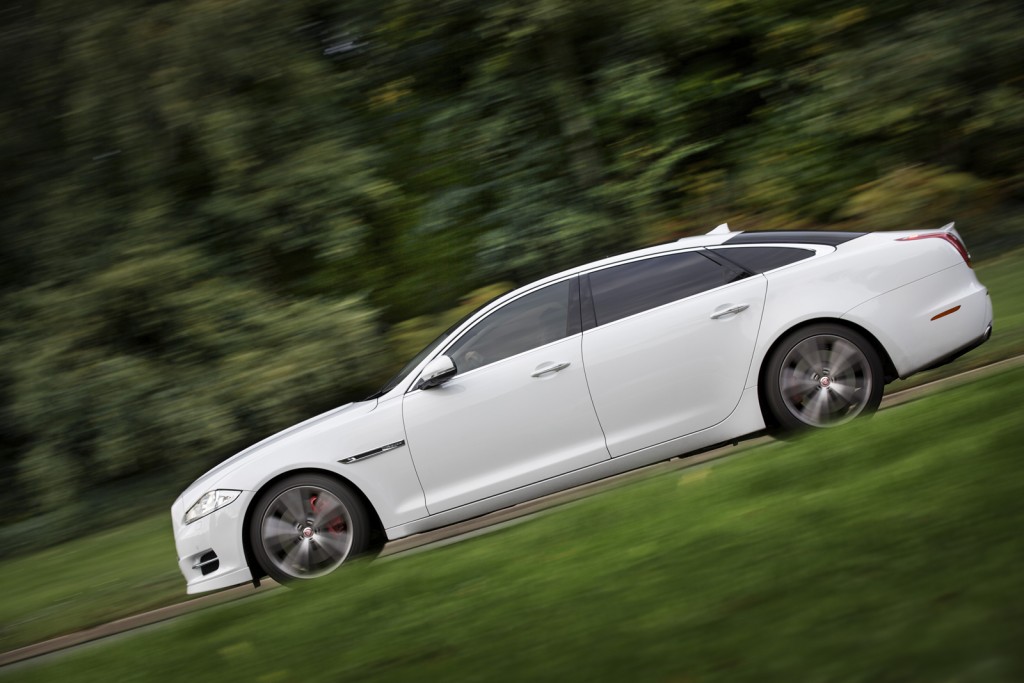 Under the hood is a supercharged 3.0-liter V-6 engine. Jaguar offers some of the best supercharged engines on the market and the XJL is no exception, offering controlled and refined power. The supercharged engine makes 340 horsepower. If you’re looking for a growling, V-8 engine, this is not the choice for you, but Jaguar does offer a V-8 engine for the XJR which cranks out 550. Otherwise the V-6 engine is the logical choice for most consumers.

It has an 8-speed automatic transmission with paddle shifters. As mentioned, all-wheel drive is an option and furthers contributes to the XJL’s on-the-road performance. This long sedan drives much smaller than its dimensions would indicate. It’s quiet inside, but powerful off the line and effortless down the road. The handling is precise and the transmission works flawlessly throwing the shifts as needed without any lag. 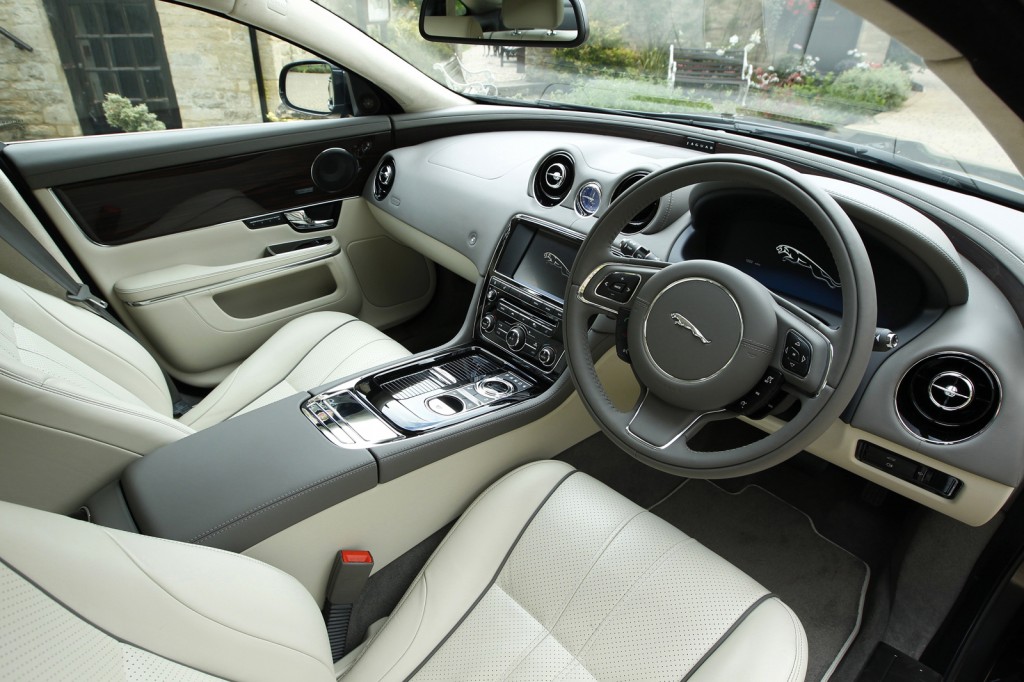 Inside, the XJL is special. No doubt is left as to the luxurious intentions of this sedan. Everywhere you look there are refined touches that indicate this is a sedan that will bombard you with comfort and luxury. My tester had a walnut veneer finish with hand-stitched leather seats throughout. Ambient lighting made the XJL that much more enjoyable at night, and gave this sedan an entirely different experience in the dark.

Other creature comforts like heated and cooled front and rear seats added to the amenities. A panoramic sunroof was amazing at night, when combined with the aforementioned ambient lighting, it gave an Old World romantic feel to this sedan.

Rear passengers enjoy vast amount of legroom. When compared to the shorter XJ, the XJL offers 44.1 inches of legroom (to 39 inches for the XJ). Rear headroom for the XJL is 37.2 inches. For such a long sedan, the trunk space is rather sparse. The trunk has a volume of 15.2 cubic feet of space.

Fuel economy for the AWD XJL is 16 mpg/city and 24 mpg/hwy. In a week’s worth of driving I averaged about 19 mpg. For a V-6 engine, this is disappointing, but fuel consumption is likely less of a factor for the average Jaguar consumer anyway. And the engine is so liquid smooth, you can forgive it a little bit for the poor fuel economy.

The five-passenger XJL has three trim levels, Portfolio, Supercharged and XJR. My tester was the Portfolio trim. Standard features on this trim include 20-inch tires, suede dashboard, heated and cooled seats and Jaguar’s Smart Key/Keyless entry and remote start. 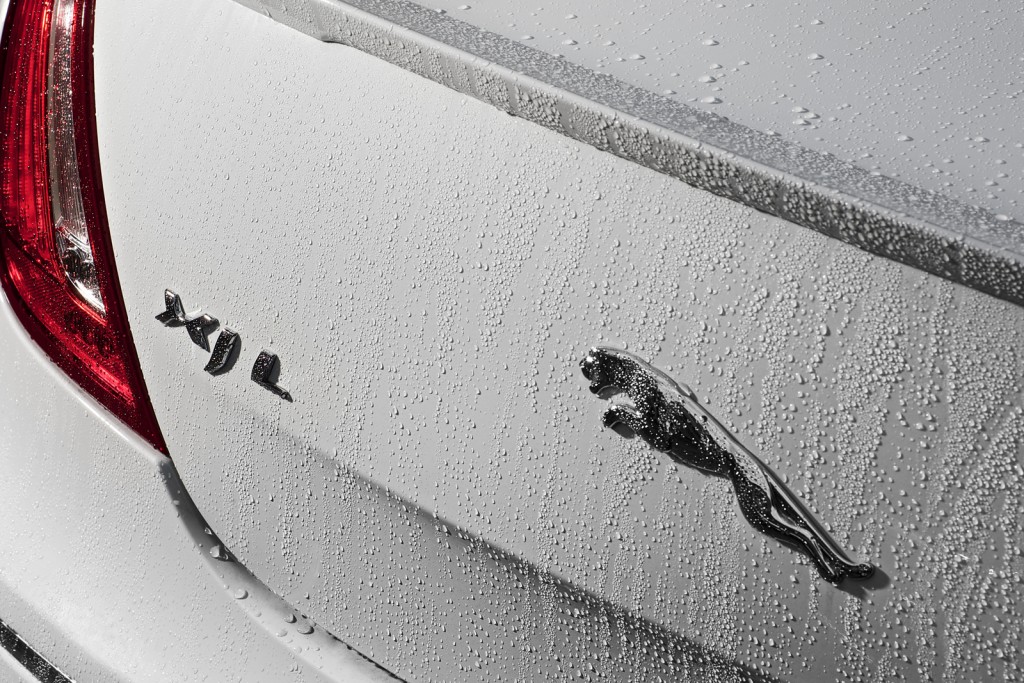 Base price for the 2015 Jaguar XJL Portfolio with AWD is $84,700. Add in a few options like the amazing the Illumination Package (which brings with it lighted door sills and illuminated air vents and great ambient lighting) as well as special Orona wheels and the final MSRP of my tester came to $91,495.

Much like its animal namesake, the 2015 Jaguar XJL Portfolio is a graceful and athletic sedan. Smooth, but fast it’s a sedan that is long in stature and long in luxury.