It’s like alphabet soup for the luxury brand of Nissan. Infiniti’s vehicle names can get very confusing. Adding to that confusion is my tester this week. The Q70 used to be known as the Infiniti M series, but they’ve now renamed the midsize luxury sedan, for reasons known only to them.

Without getting hung up on the name, the Q70 is an all-around solid luxury sedan. It’s both well-powered and chock full of luxury and technology. All of these admirable traits are expected from luxury brands today, but often times aren’t delivered.

No one can accuse the Q70 of being a glorified, overpriced Nissan. It’s much more than that! 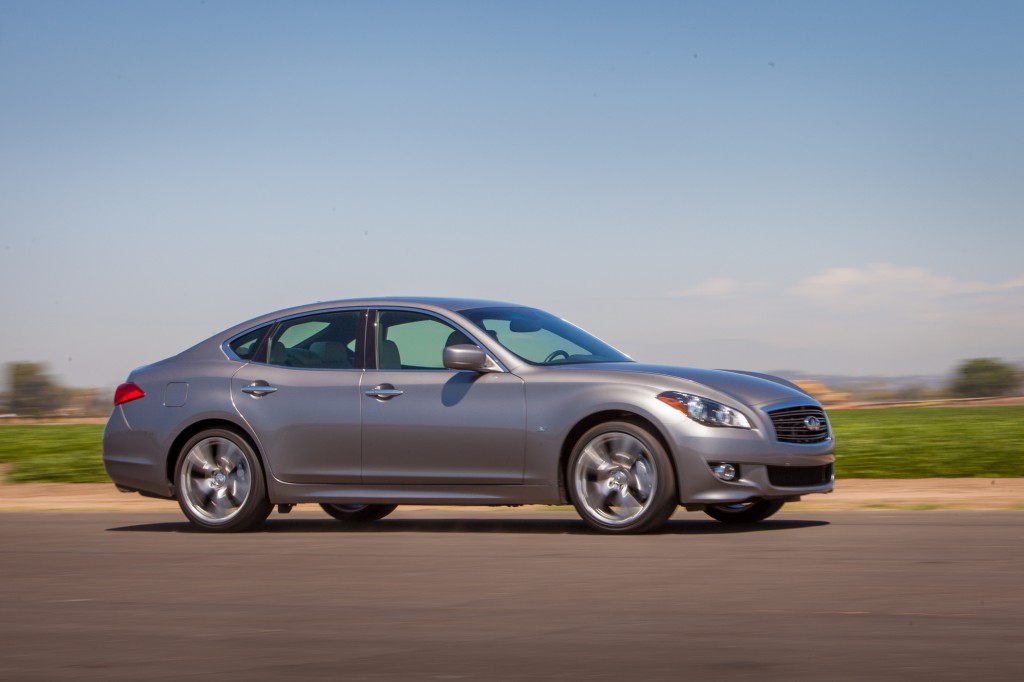 On looks alone, the Infiniti doesn’t look like any Nissan on the road today. While the latter is conservative and almost boring with its styling, the Infiniti Q70 has a luxurious vibe to its styling. It is not overstyled as to be frilly, but with the elongated front end, and flared hood, it resembles Jaguar styling at first glance. The horizontal bars on the grille tone down the aggressive styling as to not be off putting.

It’s best to look at the Q70 from the front and side to see its “best side.”

Unfortunately, the sex appeal diminishes toward the back of the Q70 with a simple, almost plain back end. The slope of the trunk, and angle of the C-pillar offer diminished view from the mirror too. That would be okay if the rear styling was exceptional, but it just isn’t.

It’s best to look at the Q70 from the front and side to see its “best side.” 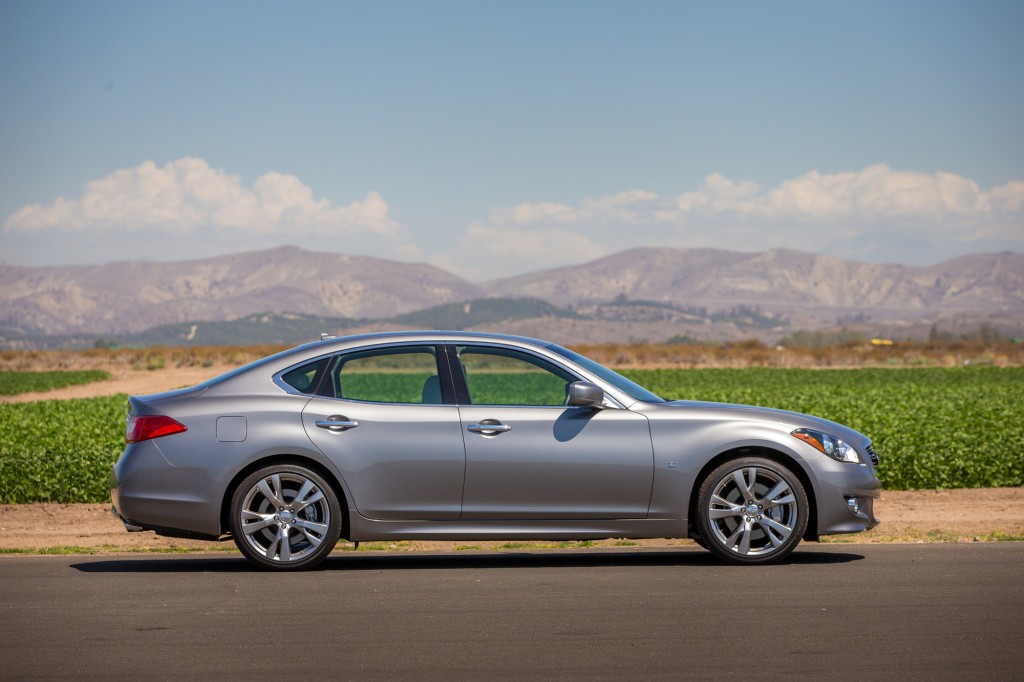 There are three different engine options for the Q70. The most popular (and the one I tested) is the 3.7-liter V-6 engine. It makes 330 horsepower and 270 lb.-ft. of torque. This engine is strong, sturdy and on the athletic side. It doesn’t growl or blaze down the street, but it provides steady, consistent power under all conditions. It is mated with a 7-speed automatic transmission that works well with the 6-cylinder engine.

There is a bigger, more powerful 5.6-liter V-8 engine for gaudy power (420 hp) and a hybrid offering (for segment-leading fuel economy). Regardless of what engine is powering the rear-wheel drive Q70, the interior is the same. All-wheel drive is an optional feature for the 3.7 and 5.6 options.

This engine is strong, sturdy and on the athletic side.

With a premium price tag and a luxury badge, you expect quality throughout the inside of the Q70. And you’re not disappointed with any of the touch points in this sedan. Faux wood accents are an elegant touch. Even finer points like the “Forest Air” system for ventilation are amazing. This system simulates a gentle breeze instead of some of the loud, intrusive ventilation systems. It’s finer points like this that really help distinguish the Q70 as a contender in the midsize luxury segment. 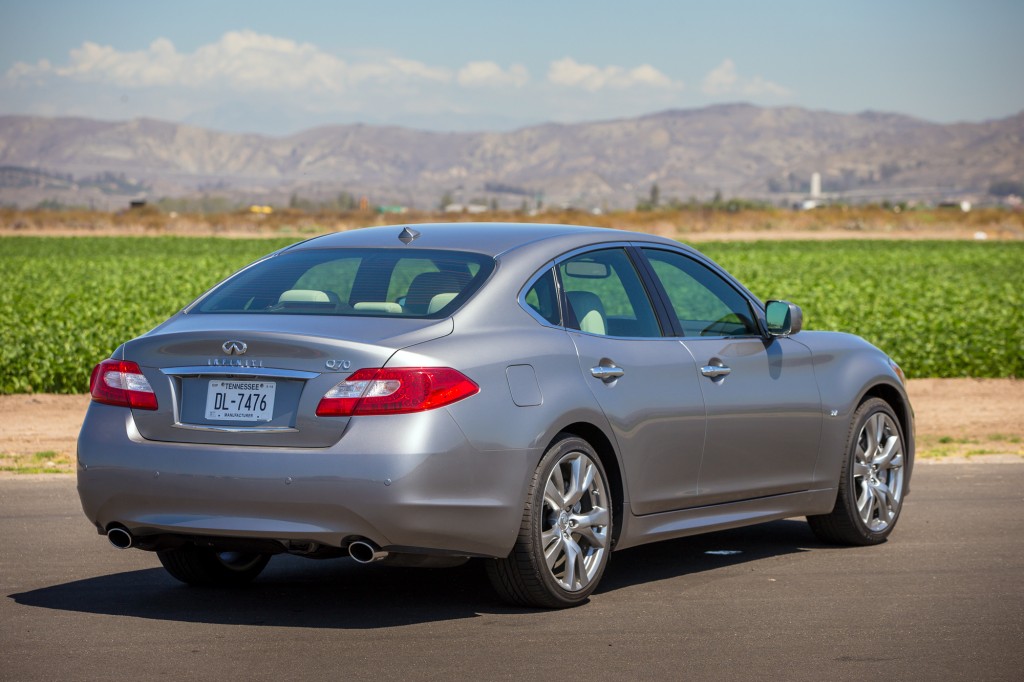 Some of its other Asian rivals lack these finer, more refined features.

Also, headroom and legroom are ample for all passengers. Considering the unusual angle of the C-pillar, I was expecting headroom to be an issue, but it is not at all, even for adults. And the seat comfort and quiet ride is noticed even for the rear passengers.

Some of its other Asian rivals lack these finer, more refined features. 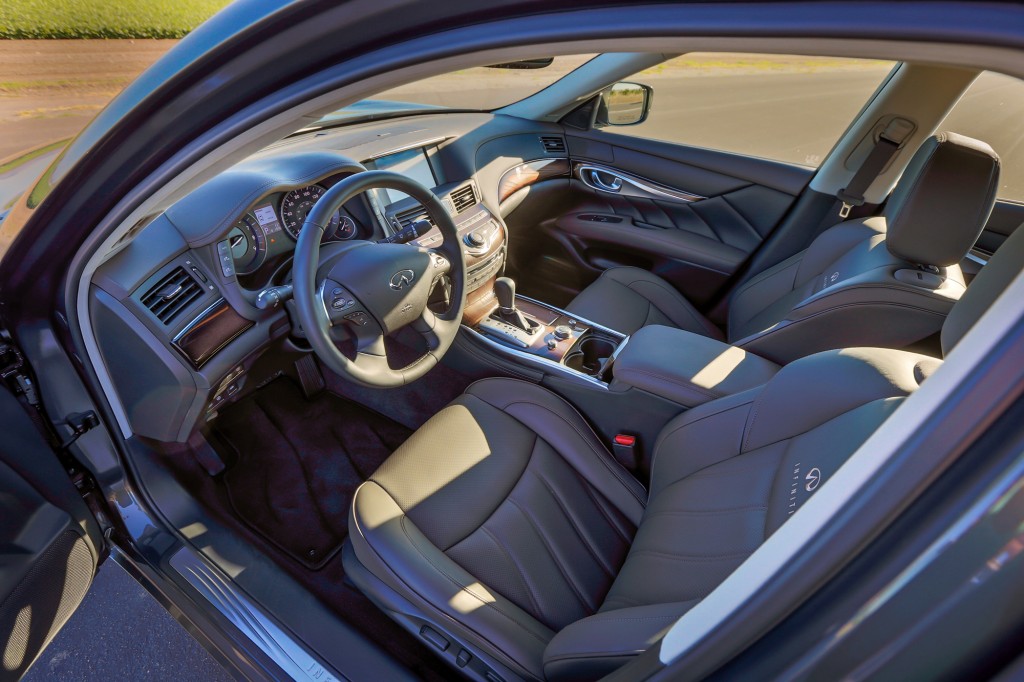 Each of these packages help to increase the price of the Q70. Standard price for the Q70 3.7 is $49,500. With all the packages mentioned and a few extra bells and whistles, my tester had a final MSRP of $64,060. That’s a hefty price for a midsize sedan, regardless of the amenities offered.

Fuel economy is average with an EPA rating of 18 mpg/city and 26 mpg/highway. In a week’s worth of sporty driving I averaged a mere 19 mpg.

Despite the name change, the Infiniti Q70 will leave its mark on the luxury midsize segment.

Despite the name change, the Infiniti Q70 will leave its mark on the luxury midsize segment. The strength of this vehicle lies in the quality of the interior as well as the stylish front end and what lies underneath the sleek hood.

Written By
Jimmy Dinsmore
More from Jimmy Dinsmore
By adding one letter, my tester this week goes from very good...
Read More
0 replies on “2014 Infiniti Q70 3.7”