The term station wagon has no cache. Instead, in today’s world we call them crossovers. And this entire segment is chock full of variants from SUV-like 7-passenger haulers to minivan-like mom-mobiles. But, I’m a guy who likes to call a horse a horse. So my tester this week is a station wagon.

The 2014 Toyota Venza may hide behind the crossover label, and may give its owners a little more cache, but when push comes to shove, this is a modern-day station wagon.

And there’s absolutely nothing wrong with that. No reason for any kind of negative connotation when it comes to Toyota’s five-passenger “crossover”. 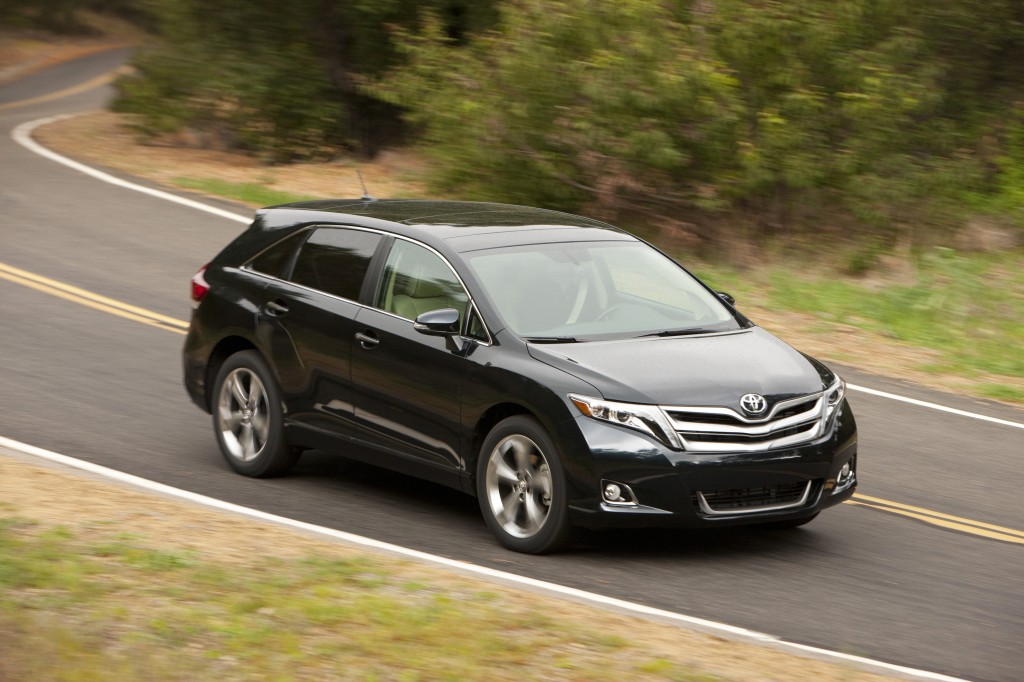 Simply by looks, the Venza is wagon-like. It has a tall profile with an elongated body, but sits lower to the ground than most SUVs. The unassuming front end lacks styling, but does give way to stylized side panels and an attractive back end, including a spoiler. You can see samplings of the Toyota Sienna, the Camry and the Highlander in the Venza’s design, and I guess that’s what makes it a crossover vehicle.

Simply by looks, the Venza is wagon-like.

The Venza has two engine offerings. A 4-cylinder engine that produces 181 horsepower is available on the basic trims while a well-powered V-6 engine is standard on the Limited and XLE trims, which is what I tested.

The 3.5-liter V-6 engine makes 268 horsepower and does so in a fuel-efficient way. In fact, there is negligible difference in EPA fuel economy between the two engines, so why not opt for more power? 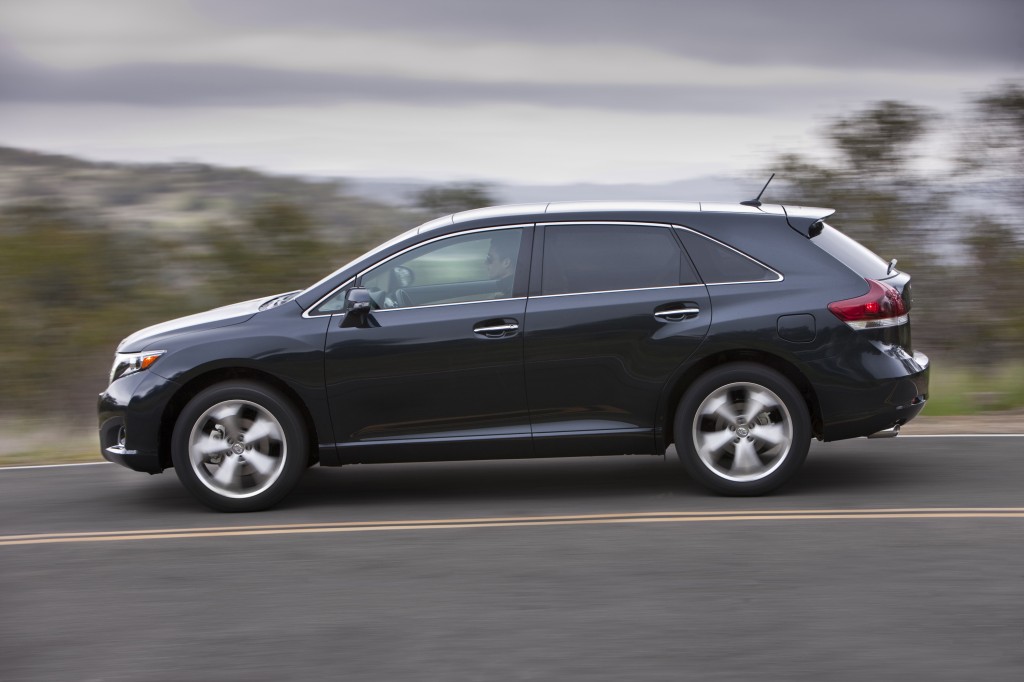 A 6-speed automatic transmission is standard. Both front-wheel drive and all-wheel drive are options. My tester came with AWD.

The Venza drives like a car. In fact, with the power of the V-6 engine, it’s like driving a longer version of the Camry, and that’s certainly a good thing. The Venza offers a refined, quiet and comfortable ride. A test drive of the V-6 version would yield a vehicle that covers all bases for a family hauler, and won’t leave you bored or feeling underpowered either.

Interior awareness is not necessarily an area Toyota excels at, but in the Venza, attention to detail is not missed.

Inside, Toyota does not skimp on the quality. Interior awareness is not necessarily an area Toyota excels at, but in the Venza, attention to detail is not missed. For example, the higher-than-normal  mounted gearbox seems awkward at first, but once you settle into your seats you realize the liberating space it provides for extra elbow room and between-the-seats storage console.

The touchscreen is a little on the small side, but does well interacting with smart phone devices. Using Toyota’s easy-to-use Entune infotainment system, you can access Pandora radio or other internet-accessible options. I love when the carmakers use the technology that is out there to enhance the driving experience. 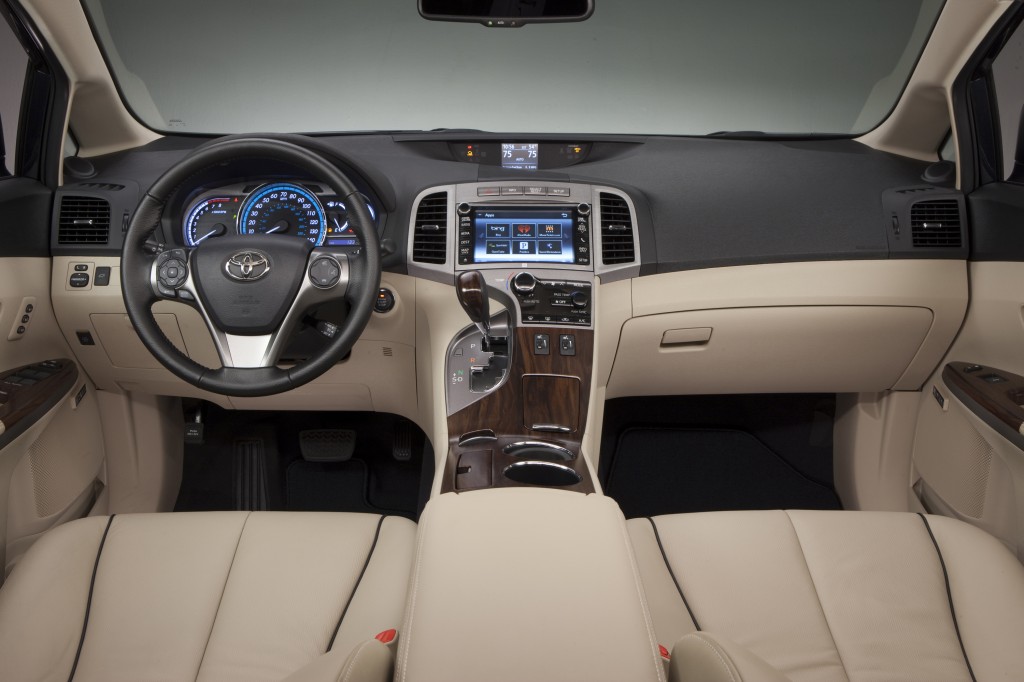 Rear legroom and headroom is vast. Rear passengers can enjoy reclining seats, which is something not found in sedans. Much more space exists than in the mid-size Camry, which is a big appeal of the Venza. Maintaining a car-like appearance, but offering SUV-like cargo space makes the Venza versatile. Fold the second row seats flat and utilize the 70 cubic feet of space for weekend projects.

There are only three trim offerings for the Kentucky-built Venza, but you can mix and match features (like the aforementioned engines and AWD). The base LE comes standard with niceties like blind-spot monitoring, dual-zone climate control and privacy glass. My tester was the XLE trim with additional features like power rear lift gate, heated front seats and leather upholstery. With the added Premium package included (at an additional cost of $1,850), you get a panoramic sunroof, an interactive navigation system (with live traffic updates) and a bigger touchscreen and improved audio system. 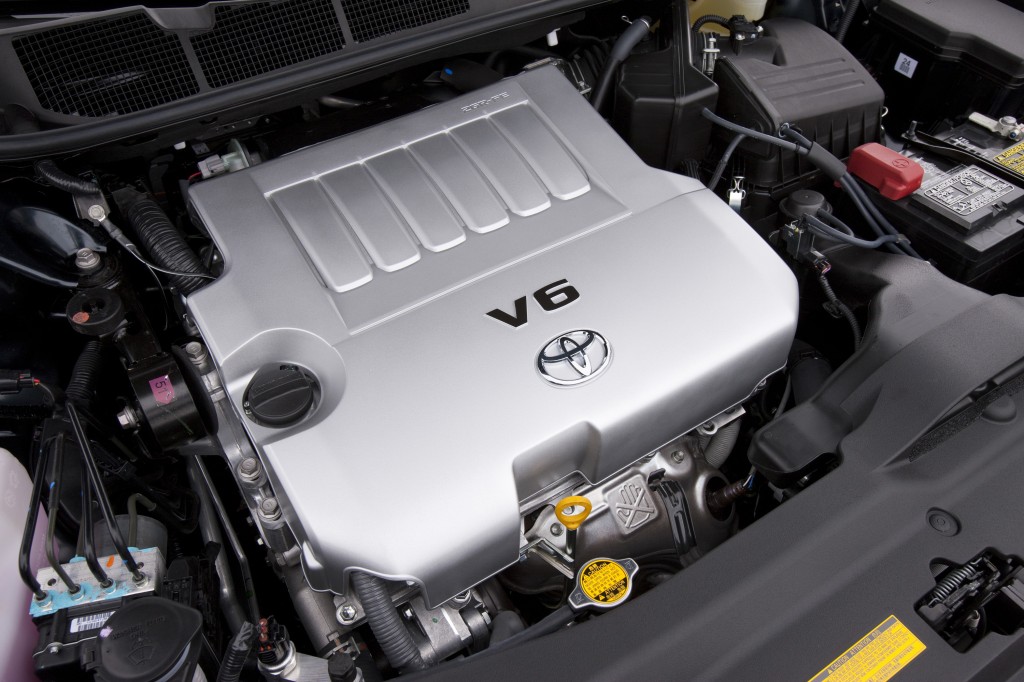 Price point varies for the Venza. The most basic, RWD option starts below $30,000. However my tester had a starting MSRP of $35,080 and with additional features had a final price of $37,790. This takes it up the ladder of pricing in comparison to some of its competition.

Whether you call the 2014 Toyota Venza a crossover or a station wagon doesn’t matter.

Whether you call the 2014 Toyota Venza a crossover or a station wagon doesn’t matter. What you can call it for sure is a steady, reliable, roomy vehicle for hauling family around.

Written By
Jimmy Dinsmore
More from Jimmy Dinsmore
My review this week requires a bit of a backstory. Because of...
Read More
0 replies on “2014 Toyota Venza”