Lets face it, Americans hate downsizing. Getting less than what is deemed acceptable by American standards will not fly in US. Everywhere else in the world, people love their small cars, and with overbearing regulations and taxes on engine displacement and the price of fuel can break the bank. Fret not my fellow Americans, just because you have to downsize doesn’t mean that you have to give up the luxuries you’ve enjoyed and the fun you’ve had. Hyundai seems to have be rewarding those who downsize, and shows us that sacrifices don’t have to be made.

Hyundai’s C-Segment compact, the Elantra, has been a hit for Hyundai and a thorn in the side of many of its competitors. Its low entry price and clever packaging and content have made it the perfect and logical choice for many customers. What Hyundai was lacking was a bit more added flair to the Elantra line. Enter the Elantra Coupe and Elantra GT. All the clever packaging and content in the sedan can now be had with in a coupe or a hatchback. The Elantra lineup comes with the 1.8L 4 pot with 148 horsepower and 131 lb-ft of torque (145bhp/130lb-ft for PZEV) and are mated to either the 6-speed manual or the 6-speed automatic with Shiftronic.

That is Hyundai speak for manual mode. My advice, let the car shift itself. It takes some time for the car to figure out that you want it to shift and while the automatic makes it a smooth transition, it just feels lazy. Our point to point test drive had us going on some very curvy roads and the time it took to shift the automatic manually made what could have been a fun time an utter nuisance. Fun and frugal coexist with this lineup. The Elantra Coupe achieves 29/40/33 (city/highway/combined) when equipped with the manual but one less mile per gallon in the city and combined when ordered with the automatic. The GT scores 28/39/32 (city highway/combined) with either transmission.

The Coupe and GT continue with Hyundai’s love it or hate it Fluidic Sculpture design, and while it looks a little bulbous on the Coupe, it translates well on the hatch back style of the GT. Hyundai offers two trims for the Coupe, the GS and SE. The latter, which was also the available tester, gives you body color mirrors, fog lights, 17″ aluminum wheels, push button start, a sport tuned suspension as well as other creature comforts. The Coupe also came with a navigation system, part of the Limited Tech Package, combined with a rear view camera. All of that came in at an affordable $23,965 including destination and the $95 carpeted floor mats. The GT is the only model in the Elantra line to not have a trim level. The tester had the Style Package which added the 17″ alloy wheels, a sport tuned suspension, panoramic sunroof, leather seats, aluminum pedals and more. It also came with the Tech Package that was also on the Coupe. All that rang in at $25,365 including destination and of course, the $95 carpeted floor mats. 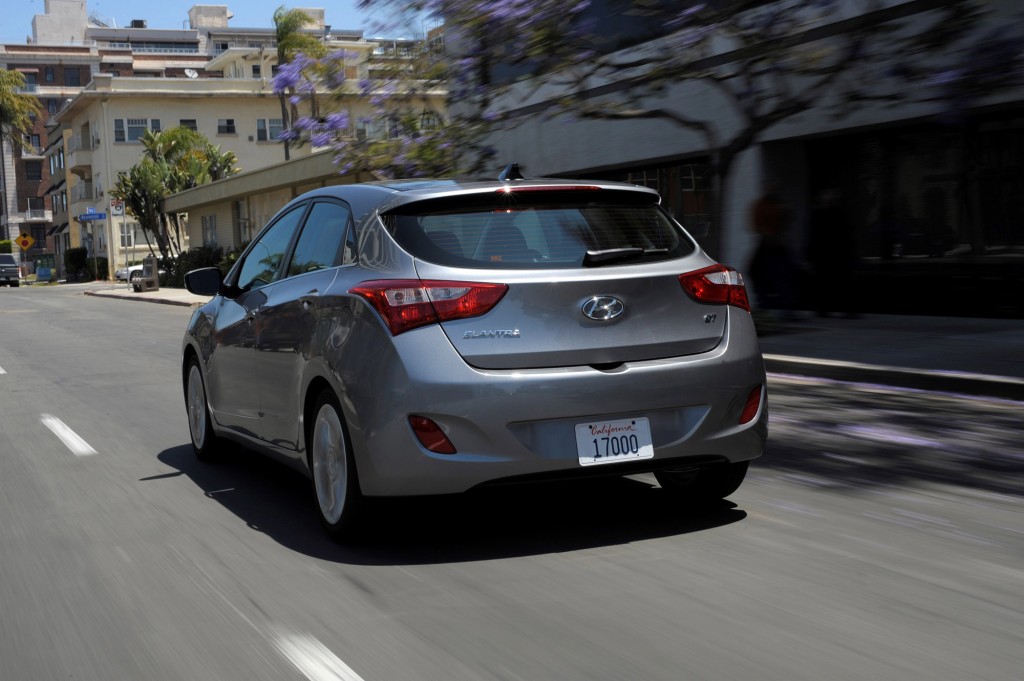 Both cars display excellent road manners and soak up bumps nicer than their segment would dictate. They are firmly planted with minimal body roll, with respect to the class, and they don’t give the driver any unwanted surprises when the road gets twisty. The GT had a more linear brake feel than the Coupe and was more confidence inspiring. A major turn off was their steering feel. The Coupe had no feedback and felt rubbery on center or when turning. The GT tries to remedy this by offering three different steering modes. Press the button on the steering wheel and you can change from Normal to Comfort, or Sport. Normal was akin to the Coupe’s steering feel, while Comfort made the steering effort much lighter and much easier.

Sport mode made the steering noticeably stiffer but much like the other two modes, lacked any sort of feedback to make the setting worthy of its name. Both cars did feel nimble thanks to their light weight. Hyundai boasts that the GT is the lightest hatch in the class and it certainly feels it. The 1.8L was quiet and adequate for in town driving and cruising around from stop light to stop light in traffic but getting up to speed on the on ramps revealed the engine to be buzzy and coarse under heavy load. It sure didn’t seem as refined as it let itself out to be in the lower city speed limits.

The interior of the Coupe was well laid out and attractive although it was mostly hard plastic. The buttons on the instrument panel were clearly labeled and easy to read as well as easy to find when driving should you decide to fiddle with the controls. The seats had enough cushion to be comfortable but the lack of lumbar support made it hard for me to get comfortable. The seats also lack enough lateral support to back up the Coupe’s sporty appearance. The rear seats of the Coupe are not as tight as they would seem although headroom is sacrificed due to the svelte body. Hyundai claims that the Coupe has more interior than the Civic Coupe, Accord Coupe, and Altima Coupe. I’m inclined to agree with them as there is plenty of space to get the right seating position.

The GT is very much the same as far as seating, however you do get lumbar support. The dash is padded and soft touch materials are more abundant than they were in the Coupe giving you a much more upscale feel. What you lose in cargo with the Coupe, you make up for it with the GT’s hatchback design. The rear seats fold flat, with the seat bottoms flipped forward. Grab the lever and lift up the floor cover and you will find a couple hidden storage compartments and a spare tire. The GT comes standard with a trail period of Hyundai’s Blue Link Telematics System which allows you the ability to check emails, texts, get directions, check maintenance etc. Due to the nature of the trip, I was unable to really utilize this feature. The Navigation system is voice activated and works seamlessly and understands command inputs quite well. The C-pillar for the Coupe and the D-pillar for the GT are rather large making the blind spots a bit of a problem which made it a little difficult to merge onto traffic on the highway. 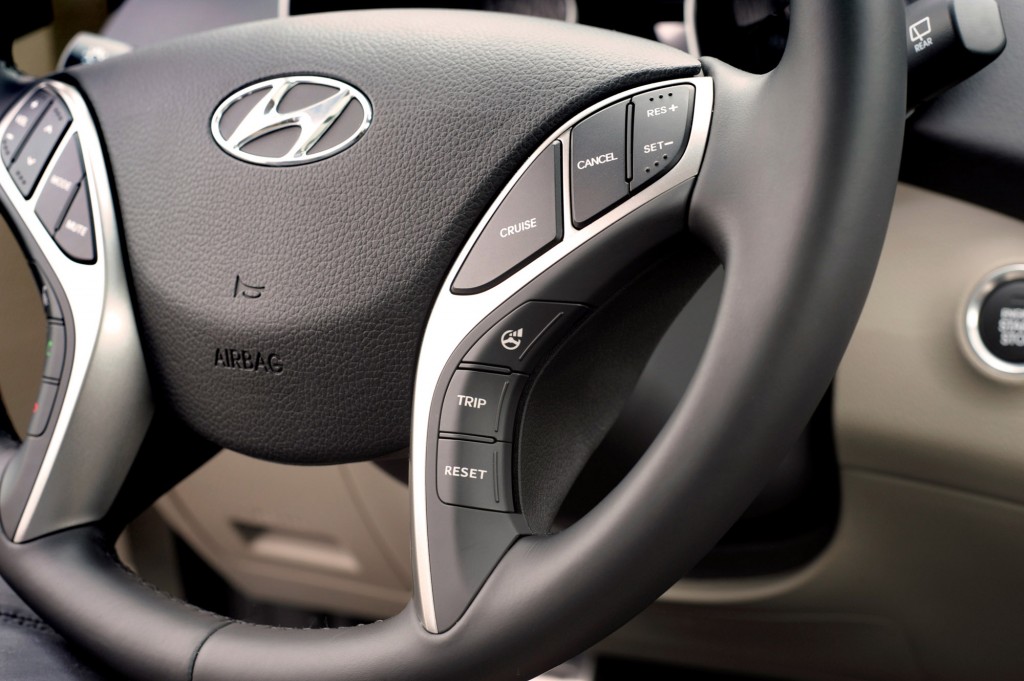 The GT irked me in a couple ways. The Panoramic roof creaked a couple times when the car was tossed hard or when over some rough roads, which is odd because Hyundai claims that the GT is composed of 57% of high strength steel to make the body as rigid as possible. The rear view camera is hidden underneath the Hyundai badge on the rear hatch and when shifted into reverse, the badge tilts exposing the camera to aid in visibility. From inside the car, you can clearly hear the motor activating and sounds like a RC car. A little bit of insulation would go a long way.

Hyundai is confident that its low pricing and bargain packages will make an even larger dent in competitor sales with the inclusion of the Elantra Coupe and GT. Their controversial styling set them apart from the rest of the compact landscape and garners attention. Only time will tell how well the Elantra family stack up to some incredibly stiff upcoming competition.