As always, subjective but as impartial as one can be.

Mazda has been undergoing a transformation for some time now. The automaker is now producing some of the most fuel efficient vehicles in their segments while maintaining their fun-to-drive mantra, thanks largely to their SKYACTIV technology. The CX-5, Mazda3, and Mazda6 are all proof that you can get fuel efficient, fun-to-drive vehicles that are also high quality, spacious, practical, and affordably priced. The transformation is not quite complete, however. The CX-9, the Mazda5 (the mini-minivan), and the soon to be replaced Miata still contain remnants from Mazda’s less illustrious past.

None of the above are SKYACTIV-era automobiles, and the CX-9 has much of the leftovers from Ford’s ownership still flowing in its veins. Mazda’s restructuring has put the CX-9 on the back burner as more important models were addressed first. That isn’t to say that the CX-9 is far from capable, but rather that it is the Elton Brand of automobiles: it will put up great numbers and give you a solid performance night in and night out, but it just isn’t the go-to player in the segment.

My tester came in Grand Touring Trim which pretty much came with everything you could want in a family mover minus the optional rear seat DVD entertainment system. The KODO styling was grafted onto the skin of the large Mazda, giving it a more handsome look to the front but the rest of the sides and rear remain rather plain and utilitarian. The massive 20” aluminum wheels do their best to add some excitement to the profile but only so much could be done given the starting point. While it is not an awe-inspiring design as say some of the other KODO language products in Mazda’s portfolio, it is also a mostly carried over product from the last iteration.

The interior room and comfort will rival that of a small condominium. The leather seating was comfortable with multiple adjustability for the driver, and included were a tilt and telescopic steering wheel, and a 8-way adjustable power driver’s seat. The material on the seats is composed of an oddly rugged material. Hard textured plastics abound just about everywhere, which, depending on where you are in your life, may or may not be a welcome thing. On the one hand, it’s easy to keep clean, and appears to be very resistant to spills and stains due to the plastics and the leather; but on the other hand, it doesn’t have that “luxury” feel that some may look for. To try and help this, Mazda has added faux wood trim to make the interior more upscale, but it fails in its mission.

The controls are easy to reach and easy to commit to memory, which allows you to keep your eyes on the road ahead. The gauge cluster is easily visible, but the 5.8” touch screen in the center stack can be hard to read because of its size. The HVAC controls are simple dials and buttons that control the entire vehicle, but the 3-zone automatic climate control will allow occupants behind the first row to control their own. The aforementioned 5.8” touchscreen looks out of place in the center stack, and it really isn’t as useful as it should be. There is another LCD information screen at the top of the dashboard that displays climate control and fuel economy readings, which looks redundant and very much like an afterthought; the LCD screen and the 5.8” touchscreen could be consolidated to one larger, more functional screen quite easily.

Tech aside, the cabin is the very definition of cavernous. Second row occupants have the luxury of sliding their seats forward or backward and even reclining the seatbacks for added comfort. This puts the third row occupants at the second row’s mercy, but with a passenger volume of 137.7 cubic feet with the moon-roof (139.4 without the hole in the roof), there is plenty of space to be shared. Leg room is abundant in the first and second rows with 40.9” and 39.8”, but the third row gets considerably smaller at 32.4”. Hip room in the second row is a rather comfortable 56.0” with the front being 56.5” and the rear scaling things down to a cozy 43.7”. 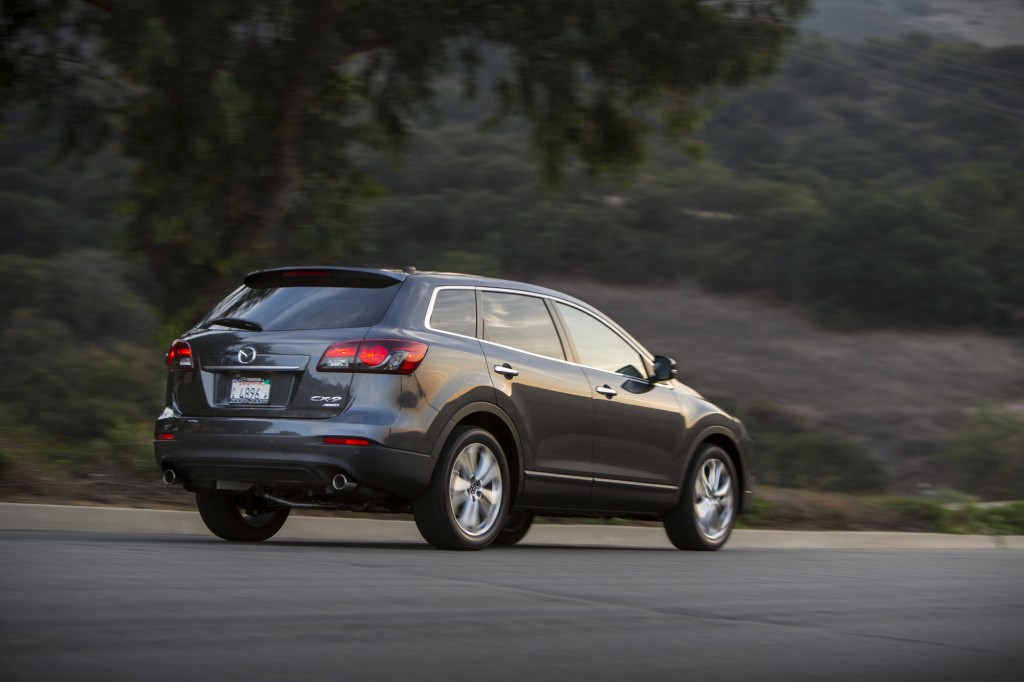 Shoulder room is 58.7” in the second row, 59.4” in the front and 56.9” in the rear. There is plenty of head room in the first and second row, but the third is rather tight and should be reserved for children. There are a minimum of 8 cup/bottle holders and plenty of storage areas for passengers to keep their things, and should that not be enough, cargo space is abundant. With the second and third row neatly folded down, the CX-9 boasts 100.7 cubic feet of space. With just the third row folded down that amount gets cut a little more than a half at 48.3 cubic feet. Space behind the third row is 17.2 cubic feet.

All the space in the world is for naught if the vehicle is hard to drive. However, the CX-9 is a large vehicle that is still rather easy to maneuver. Visibility is surprisingly good for a large vehicle, as blind spots are minimal, and the standard array of safety features such as a blind spot monitoring system, back up sensors, and rear cross traffic alert are present. The view out of the back is larger than expected for a crossover of this size, and is assisted by a reverse camera that is displayed in the central screen in the dashboard. The steering is precise and light to the touch, and the turning radius is great for most tight parking lots as I never had to back up the vehicle to readjust the entry.

The CX-9 remains confidently composed and sure footed, but it has no problem letting you know that it is emphatically not a sporting vehicle.

The ride is smooth and airy, but still composed. The CX-9 is not a buttoned down ride, and it doesn’t wallow about; instead, it settles in a midway point that most families would find rather enjoyable. The fully independent front and rear suspension do a fantastic job of keeping the occupants isolated from road harshness, though the vehicle does suffer from body lean in corners should you get a little overzealous with the throttle. The brakes are easy to modulate and are linear, and the chassis responds well to steering inputs. The CX-9 remains confidently composed and sure footed, but it has no problem letting you know that it is emphatically not a sporting vehicle. 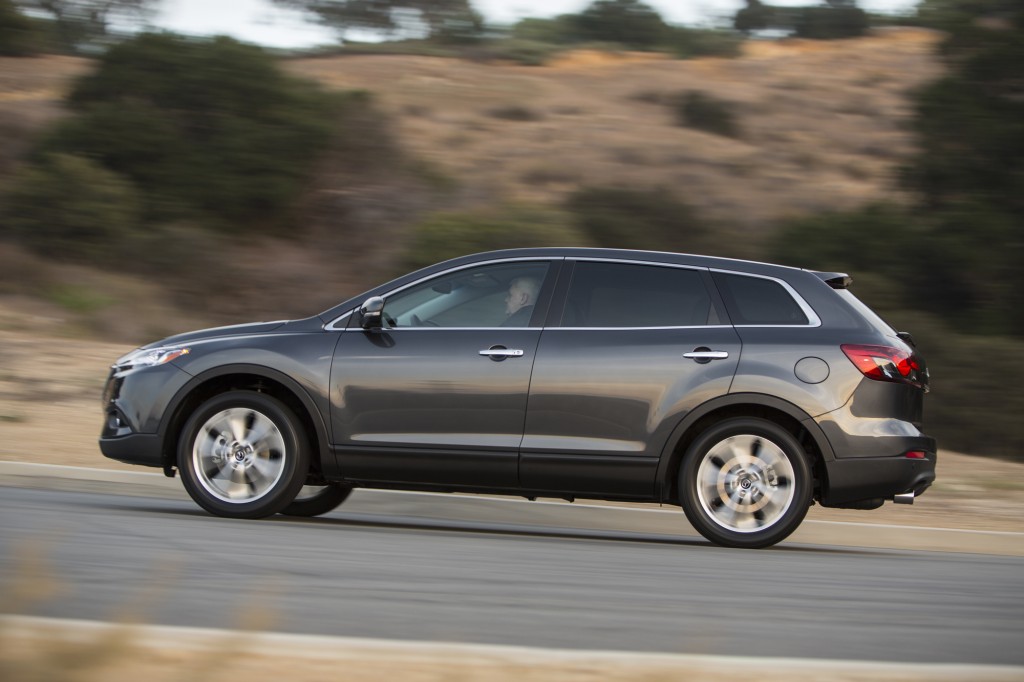 On the highway from Litchfield County, Connecticut to Natick, Massachusetts, the CX-9 showed its stellar road trip prowess by exuding all the above characteristics that families look for in a vehicle such as this. The only complaints I have are the occasional wind noise and the engine noise humming quietly into the cabin. It is not intrusive or loud by any means, but still more than what I’ve come to expect from modern vehicles in this class.

On the highway from Litchfield County, Connecticut to Natick, Massachusetts, the CX-9 showed its stellar road trip prowess by exuding all the above characteristics that families look for in a vehicle such as this.

The single biggest complaint I had with my CX-9 AWD tester was the fuel economy. The big Mazda is rated at 16 mpg city and 22 mpg highway with a combined 18 mpg highway, but in my experience even that 18 mpg was a struggle to reach. I had to hypermile this vehicle on the highway to get past 19.2 mpg, and in town it easily dipped into the 17 mpg range. The sole engine choice for the CX-9 is a 3.7-liter V-6 that has, unfortunately, been dragged over from the Ford era. While it is a potent power plant with 273 horsepower at 6,250 rpm and 270 lb.-ft. of torque at 4,250 rpm, it may have fared better at the gas pump if it employed a transmission with one or two gears. The 6-speed automatic delivers smooth shifts up and down, but is given the task of delivering efficiency; a task that it is struggling to achieve.  A drivetrain update is desperately needed.

I often ask close friends to describe my test vehicles with one word. One friend’s choice was particularly noteworthy: “disposable.” After much thought, I have to agree with him regarding the CX-9. Consider it a backhanded compliment if you will, but the car is exactly that; it is perfect for families in that it is “disposable”. It is great when you are starting off with children, but as they age and move on, you move on to something else.  Not because you don’t want the CX-9, but rather because you no longer need it. It is a vehicle that is a necessity at a certain stage in your life, and you wonder where you’d be without one, but once its purpose has been served, it’s not really of any significance to you anymore. While it remains a fantastic people mover, I feel that it is past its prime as newer, “cooler” players have come into the segment. 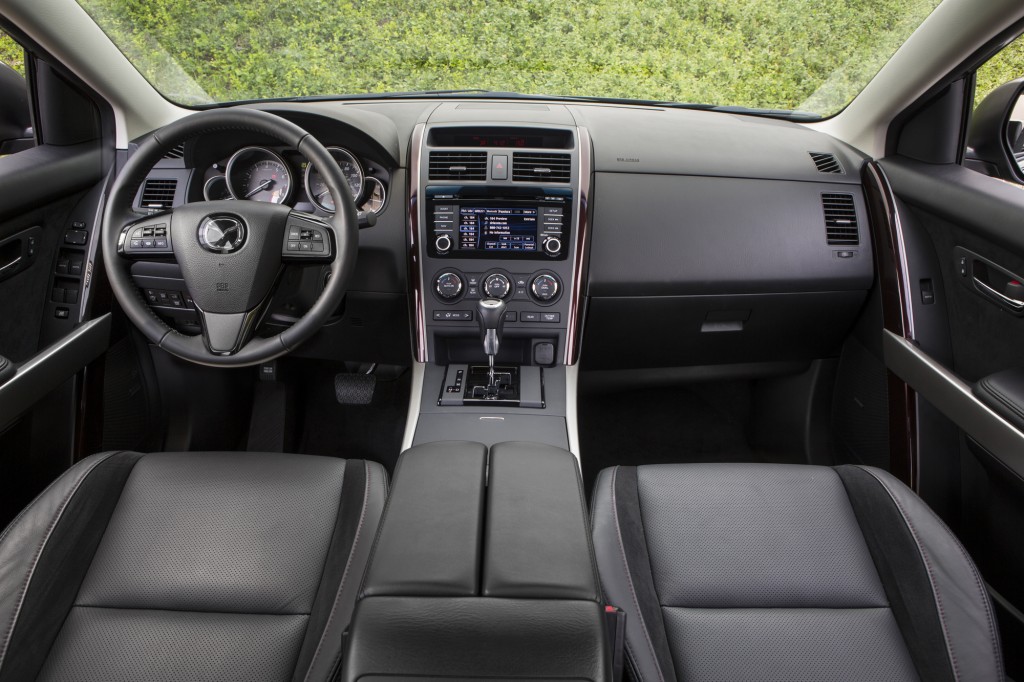 Still, it makes for a compelling argument. As it aged it just got left on the back of the bookshelf and people have forgotten just how capable it is. It is a roomy three-row crossover utility vehicle with optional all-wheel drive, and plenty of versatility; add that up and the CX-9 is a capable people mover. But the lackluster fuel economy, some of the oldest technology in the segment, and the questionable material choices don’t help, especially when you consider that the CX-9 resides in one of the toughest segments in the automotive business.

If Mazda’s other stellar products in the Mazda3, Mazda6 and CX-5 are foreshadowing signs of things yet to come, then the future of the CX-9 looks promising.

Even at a very reasonable as-tested price of $40,005, which included the options of the GT Tech Package for $2,435 and a $150 Rear Bumper Guard, it is up against some serious heavy hitters that are simply fresher. According to Good Car Bad Car, Year-To-Date sales of the CX-9 for July of 2014 stand at only 1,678 units with only 5 worse selling vehicles in the segment. Despite the KODO-inspired face lift which makes the car a bit more handsome, its sales numbers haven’t improved; but if Mazda’s other stellar products in the Mazda3, Mazda6 and CX-5 are foreshadowing signs of things yet to come, then the future of the CX-9 looks promising. The unfortunate part is knowing how long the wait is going to be.