Understated excellence in a sports coupe

Fresh off the mint, the 2018 Audi S5 Coupe is the result of a comprehensive redesign of the Audi A4 and A5 models. Available now in Premium Plus and Prestige trim, this latest marque from the Audi stable is sold in coupe, cabriolet and five-door fastback versions.

Our test car arrived dressed up in eye-catching Navarra Blue metallic ($575), and from the onset it was clear that she has been completely reimagined. She is still an Audi, of course, and still oozes excellence, and all of the old, familiar Audi proportions have been retained, but the designers of the 2018 have sculpted the lines a little deeper, lowered the leading profile and given the headlights a slightly angrier look.

The new lines are most discernible in the power dome, which is more sharply etched, and a deeper character line cut into the sides. Both have the same clean lines and more pronounced profile, and overall, the car is sleek and unpretentious, but at the same time elegant, and supremely poised.

Look out for two packages, the S sport package, coming in at $2,500, and including red brake calipers, sport adaptive damping suspension and sport rear differential. The 19’’ Wheel package, at $800, as the name implies, includes 19’’ 5-spoke-cavo design wheels.

Our test model came in the Rotary Gray color scheme, a combination of chic grey tones with a splash of the exterior color. As usual, style and elegance are the basic benchmarks of Audi, and at $1,250, the seating surfaces are upholstered in deluxe Nappa Leather, luxurious to the touch, yielding but firm, with decorative stitching and soft leatherette cladding on the various center consoles and armrests.

The seating, of course, is so much more than just seating. The Audi specs describe the system as ‘Twelve-way power front S sport seats, including four-way power lumbar adjustment’. What this means in layman’s language is that if you cannot adjust the seat to suit your specific needs, you are probably not human.

The Prestige package, coming in at a respectable $4,400, offers a selection of luxury extras, including 3D sound from a Bang & Olufsen sound system, a Head-up display and full LED interior lights throughout. The lighting, of course, is fully customizable, from ambient to bright, and in the coupe, you can expect no less that 30 color profiles.

Added to this is a top view camera system and Audi mmi Navigation plus with MMI touch, which Audi proudly calls ‘built in intuition’. It is an operating system that puts the driver in touch with every aspect of the vehicle, from sound to navigation, and in fact every aspect of the vehicle’s functionality. A 6-month Prime & Plus subscription comes with the package, and last but not least, our favorite feature, which is the Audi virtual cockpit.

What is the virtual cockpit? 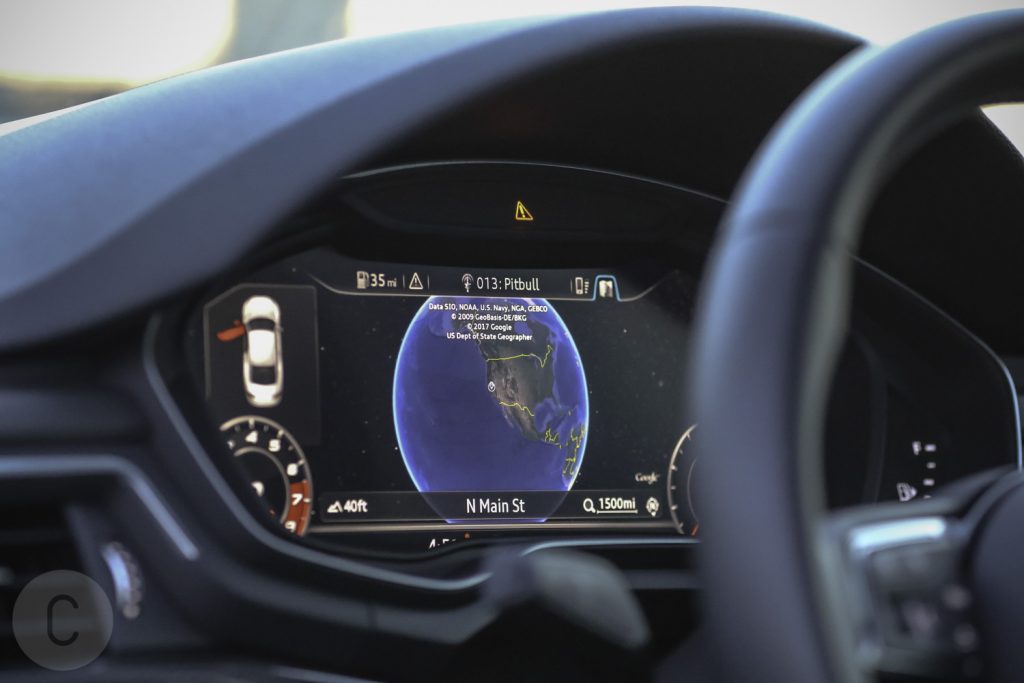 The virtual cockpit is the joyful result of Audi MMI, taking driver control and fingertip information access to a whole new level. Dispensed with entirely are the traditional mechanical dials, replaced by an animated instrument cluster on an LCD screen. The high resolution screen is located behind the steering wheel, directly in the drivers line of sight, and it can be programmed to display, apart from all the usual media and Bluetooth functions, Google Earth 3-D graphics, traffic data and so much more. 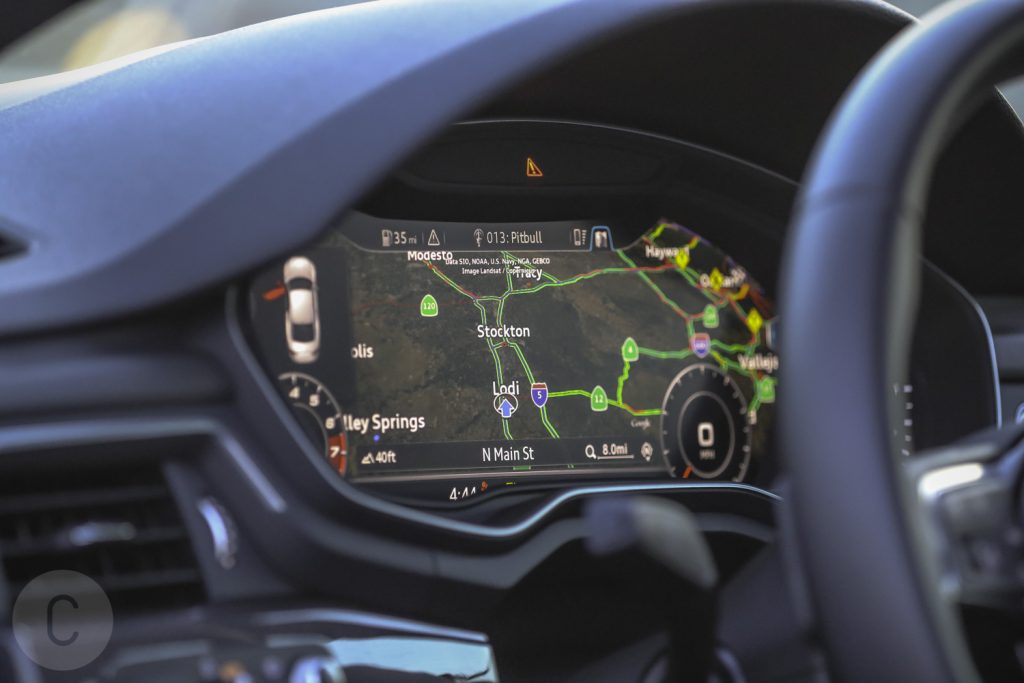 Control is via a toggle on the center console or via fully integrated steering wheel controls, which is itself a work of art. Leather wrapped and stitched, it offers, besides MMI control, shifting paddles and a chunky three-spoke, flat bottomed design. It is another little masterpiece.

Then there is the Driver Assist package, at $1,800, that offers the by now fairly standard features of adaptive cruise control, Audi active lane assist, high-beam assistant and traffic sign recognition.

And finally, for $500, you can choose carbon atlas inlays, touches of trim in woven carbon fiber pattern, an edgy and slightly industrial look. 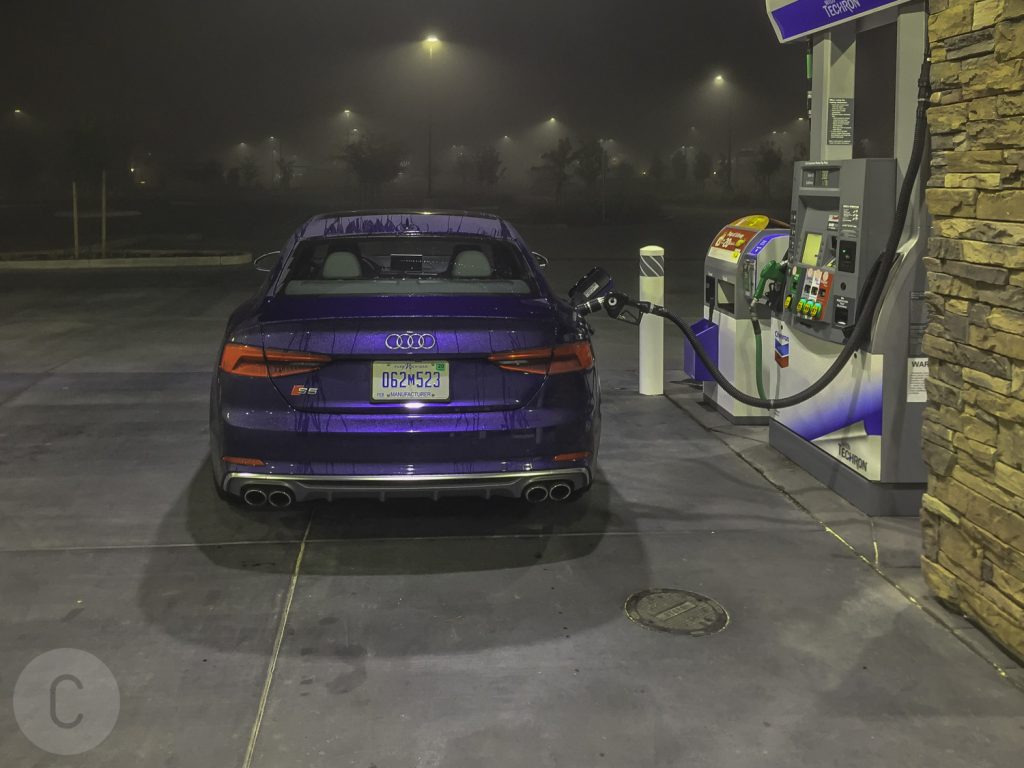 The EPA rates the S5 at 21 mpg city and 30 mpg highway, with combined mpg pegged at 24. During the week that we had our test model, however, she averaged out at 23 mpg.

The 2018 Audi S5 Coupe carries under the hatch a 354-hp turbocharged engine, delivering 369 lb.-ft. of torque that is fed through an 8-speed tiptronic automatic transmission. Expect 0 to 60 mph in 4.4 seconds, which is extremely respectable in this class.

There are quite a number of technical changes to report for the 2018 S5, not least the replacement of the S tronic dual-clutch transmission by a ZF-derived eight-speed tiptronic transmission. The S tronic, incidentally, is still fitted to the A5.

With the introduction of a new 354-horsepower engine, changes needed to be made elsewhere down the drive chain. The Audi quattro system delivers power from the engine along a standard, all-wheel drive system. For the S models, this has been designed with a more dynamic power distribution, with a 40/60 split in the direction of the rear wheels.

This ratio can be varied by the center differential according to momentary shifts in road conditions, and with an optional short sport rear differential, power can be distributed along the rear axel for improved traction and control in the bends.

All of this needs some exceptional suspension, and the S5 features an advanced 5-link multilink system at each wheel. Ongoing, automatic damper adjustment modifies handling according to driving conditions and cornering, and as the driver switches between drive modes.

There are four such Drive Select modes available on the S5, and these are: Eco, Comfort, Dynamic and Individual. The drive modifications of each are fairly self explanatory, adjusting power distribution, suspension, throttle and handling according to each mode. Drive Select modes can be controlled directly from the steering wheel, allowing the driver to flip through modes easily under changeable road and driving conditions.

A common feature of all-wheel-drive performance vehicles is a tendency to oversteer, but the 2018 S5, notwithstanding is rear focused power split and rear sport differential, resisted most efforts we made to get her to misbehave. Even while pushing hard into tight corners, steering was firm and dependable. Put her in a corner, and she will go exactly where you send her. It is hard to imagine pushing the S5’s steering beyond its limit under any other than track conditions.

What we liked: We were impressed by the new exterior design, and of course we were very taken by the virtual cockpit, and we liked the fact that the S5 is noticeably quicker than its predecessor.

What we didn’t like: There is no manual transmission option, and it is pricey if you go mad with the options and extras.

The 2018 Audi S5 Coupe competes with usual suspects, Mercedes , BMW and Lexus. The 2018 Mercedes C-Class occupies the highest step on the podium by most indices, and the BMW 4 Series comes a close second – although some reviews give it the top spot. The Lexus RC seems to be struggling to reinvent itself as a sports coupe, and brings up the rear a little, while the S5 occupies the middle ground, combining style and respectability with performance and handling.

We think the S5, taking into account price, performance and looks, wins hands down.