Welcome to the best time of year to be a car enthusiast. That’s right, it’s auto show season again, and as manufacturers prepare to roll out their 2018 designs, international events like Germany’s IAA Auto Show in Frankfurt offer lucky spectators a glimpse at the next-generation of concepts and halo cars.

Being Germany’s premier automotive forum, center stage at Frankfurt naturally belongs to German cars. BMW, Mercedes, and Audi all brought their A game to the IAA, but that doesn’t mean that other brands from around the world sat this one out. Here are our top 10 from the 2017 Frankfurt Auto Show: 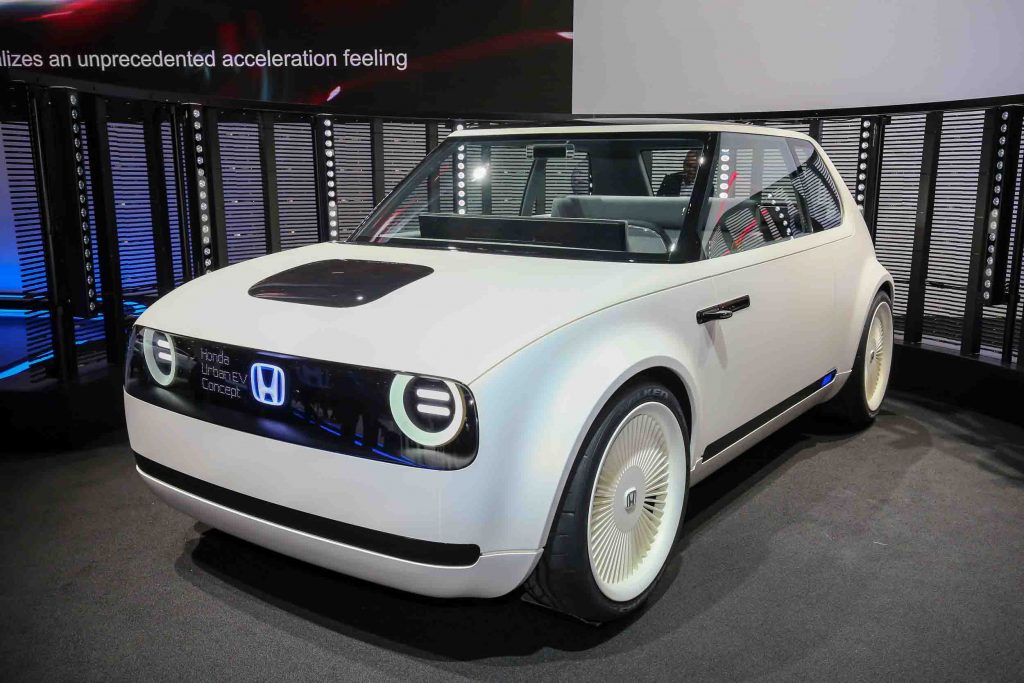 Honda is a brand known for efficiency and pragmatism, so you can imagine that they don’t take lightly to being overshadowed in the EV market. Even though brands like Toyota and Tesla may have been first to the game, Honda’s EV demonstrates that coming late to the party means more time to get prepared.

The EV’s styling manages to evoke the first-generation Civic and be futuristic at the same time. The real fun starts inside, though, where Honda has created the cleanest dashboard layout we’ve ever seen, thanks to complete reliance on voice commands. Let’s hope they can realize this idea since they plan to put the EV on sale in 2019. 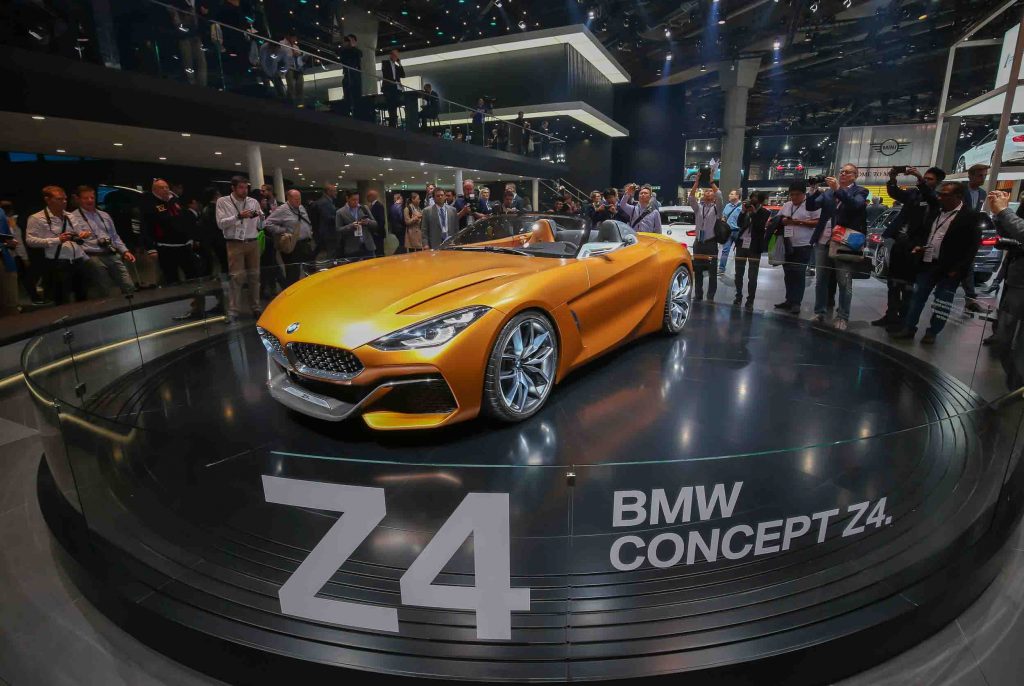 The new Z4 has been the worst-kept secret in automotive circles for nearly a decade now. Developed in collaboration with Toyota, BMW fans have been trying to guess the car’s name since it was announced. It seems they were overthinking things with all that Z5 talk.

Even though we knew it was coming, the new Z’s styling is a pleasant surprise. Concept cars have worn heavy camouflage, and the presence of a Toyota twin made decoding test mules even tougher. The concept doesn’t have a top—a feature questionable for a production car, but the car’s lightweight CLAR underpinnings and good looks should stick around. 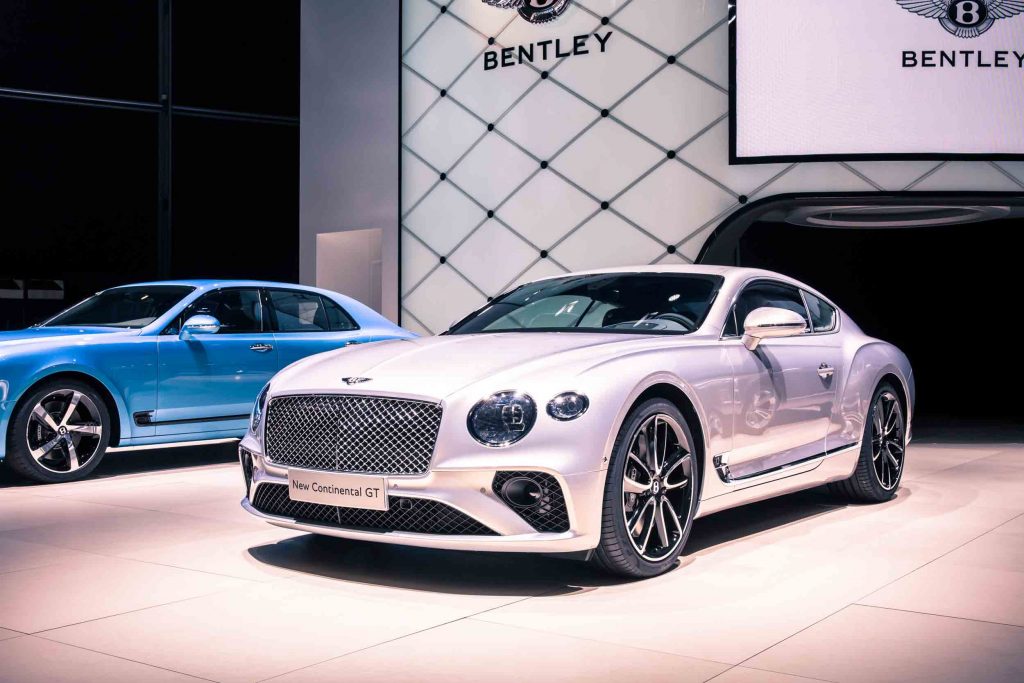 The Bentley GT bowed in 2004 and was an immediate hit. Introducing the new car instantaneously transformed Bentley’s image from the car of choice for the landed gentry to a sporty but elegant GT for the young and successful. Bentley got eight years out of its first GT design, and the 2012 redesign of the car is easy to overlook if you do not follow the brand. That means it is time for an all-new Continental.

Spoiler alert—it doesn’t look all that different, but hey it works for Porsche. Bentley says that it set out to create the best grand touring car in the world. To do it, they borrowed some excellent bones from the Porsche Panamera, shaved nearly 300 pounds, and shifted weight distribution. It has a high-tech suspension that adjusts depending on mode and road condition, a classically opulent interior, and 6 percent better fuel economy from its twin-turbo W12. 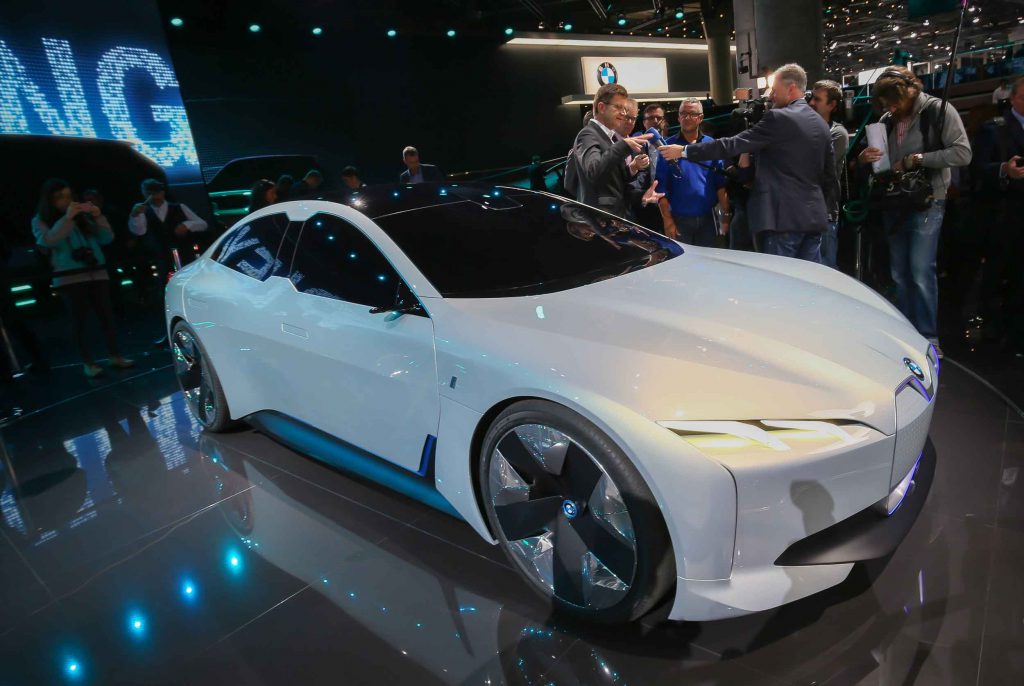 Like the Honda EV, the i Vision Dynamics is an electric car, but don’t expect to see this on the road in 2018. BMW says this is the archetype for a Tesla-fighting all-electric Bimmer, and it has the performance to back it up, going zero-to-sixty in four seconds flat and sporting a range of 373 miles.

You can see some elements of i8 in its design, but instead of a halo car, the i Vision Dynamics is intended to be a mass-produced model. Time to put your boots on, Elon. 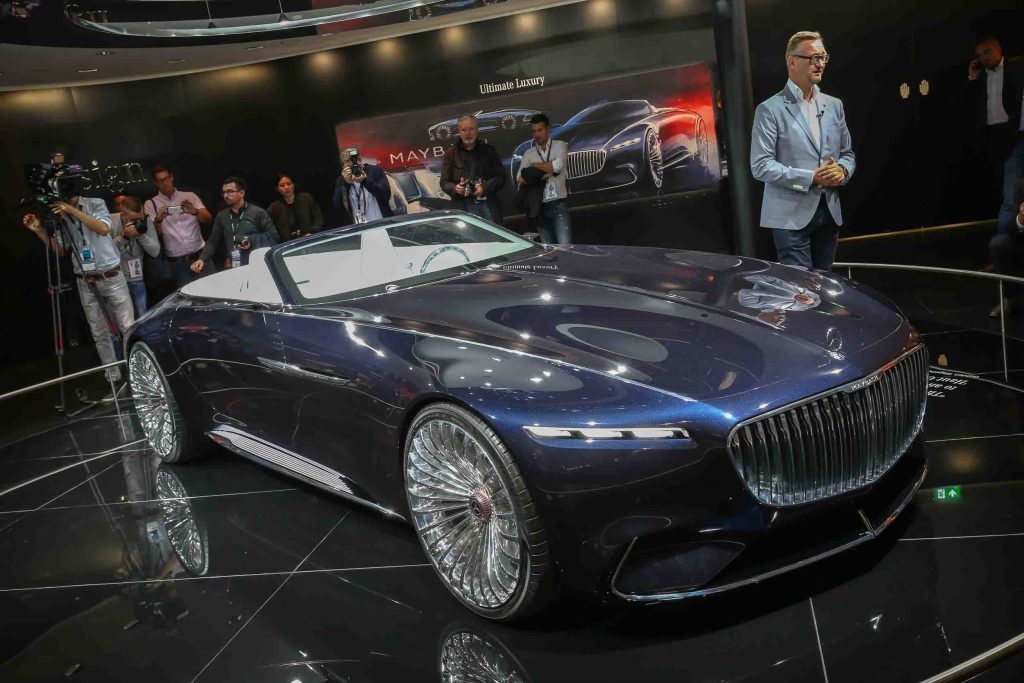 The Maybach name has done something of a disappearing act since the stretched S-Classes of the late 90s and early ‘naughts, but it has not gone away. Mercedes thinks 2018 is the perfect time for a reintroduction. How does a 19-foot long convertible sound for making an entrance?

The Vision Mercedes-Maybach 6 Cabriolet has been compared to yachts. It’s 100% electric, with a motor located at each wheel. Combined output is 750 horsepower, and Mercedes will tell you that it can cover 200 miles on a single change. Inside, it looks, well, like a yacht. It is Mercedes doing their best to remind the yacht crowd high-tech doesn’t have to mean boring. 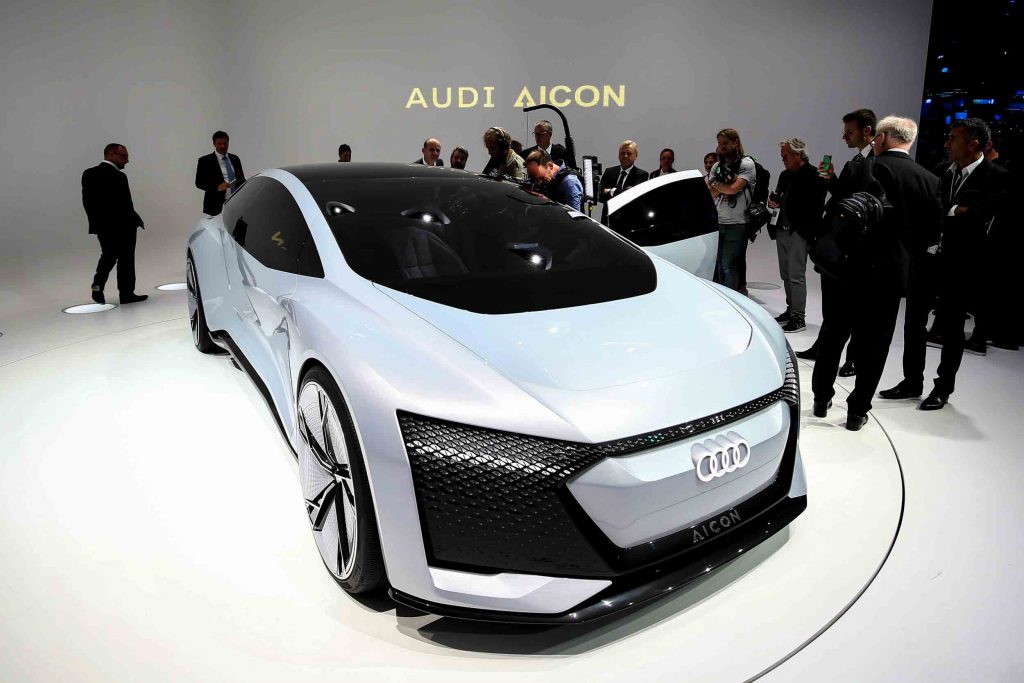 Even car shows with futuristic production cars need cars that are from the future. That is where the Aicon comes in. Notice the first two letters in its name? The Aicon is all about implementing artificial intelligence.

The four-seat sedan offers room for four with forward features for a world where humans no longer take part in the driving experience unless something goes wrong. It even has a drone that deploys to light your way when you exit. Fancy that making production. 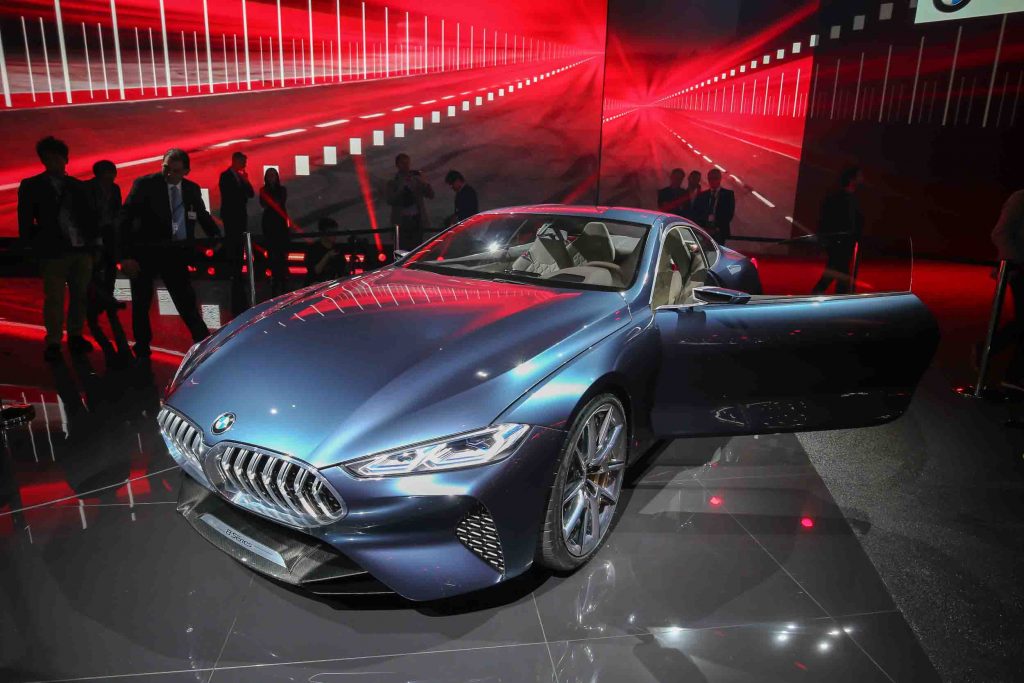 Just as the BMW super coupé of the 90s is returning to coolness after the inevitable period of “not new but not classic” that applies to nearly any car, BMW is poised to launch the second coming of the highest number on the Teutonic totem pole.

Much like the 840 and 850 of yore, the new 8er is a technological tour-de-force based on BMW’s new CLAR flexible architecture. It sports xDrive all-wheel drive, three choices of engine, and a price tag over 100-grand. It also looks the business, particularly from the rear three-quarter view. 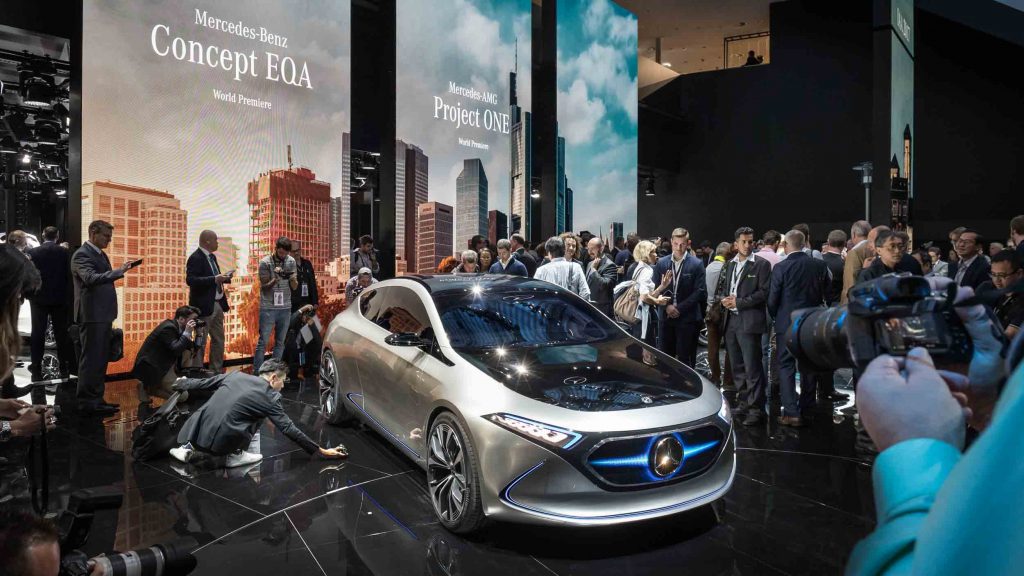 Yes, wagons are making a comeback, and it’s exciting, but hatchbacks are eternal. Even if we’re not hip to them in the USA the way that other countries are, a hatch is possibly the most practical vehicle you can have anywhere but on the open range.

Fully electric thanks to two motors producing a combined 268 hp and 368 lb.-ft. of torque, the EQA is intended to be one of the first entries in Mercedes’ eco-friendly EQ line. It has about a 250-mile range and uses innovative charging technology that lets it fuel up more quickly and use out-of-network charging stations. 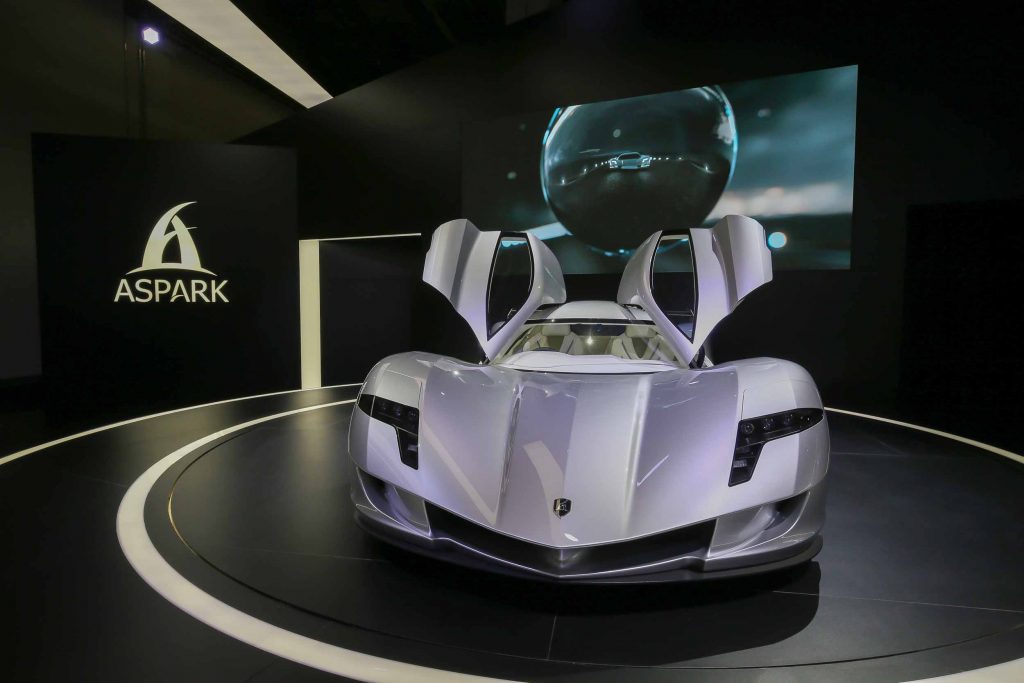 Keeping Honda from dominating the show for Japan, little-known Aspark unveiled a concept that has apparently been in the works since 2014. At under 1900 lbs., the Owl is designed to be the quickest accelerating electric car on the planet.

Its feathery weight means that doesn’t require brain-melting levels of power, though it does produce a healthy 430 hp and 563 lb.-ft. of torque. The bad news? It only offers 93 miles of range. Can you say “track special.” 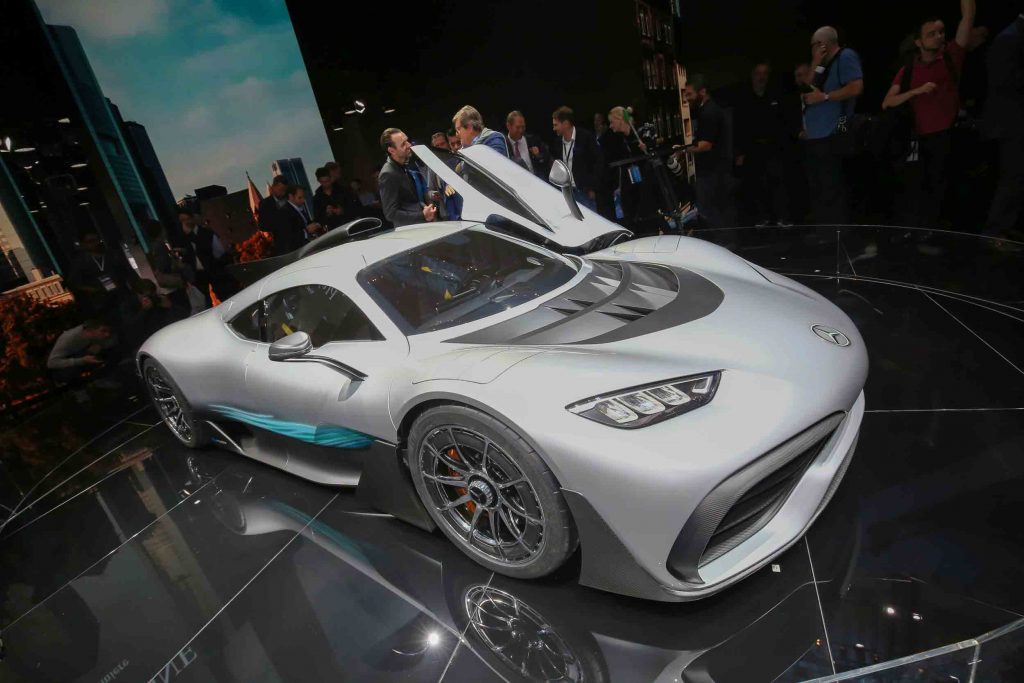 Speaking of special, Mercedes finally took the wraps off of the hypercar they have been promising will compete with the “holy trinity” from McLaren, Porsche, and Ferrari. It is called the Project ONE because it’s German and cool enough that its name is really of little consequence.

Mercedes seem to have stolen a few styling cues from the team at McLaren with the Project ONE, but under the hood, it’s all Mercedes racecar. A turbocharged V-6 hybrid power plant is pilfered straight from the companies F1 program, imbuing this silver arrow with 1000 track-tested horsepower. Of course, it will be exclusive, with production slated for a meager 275 units.

As if making the list three times already wasn’t enough, BMW earns kudos for their latest X-series crossover, which wears the prestigious 7 badge and is designed to do battle with the best from Range Rover. It gets new laser headlights and a cushy interior with “interactive LED choreography” and touchscreens for front and rear occupants.

Also hailing from the Bavarian skunkworks is the new MINI John Cooper Works GP concept, which marks the latest iteration of the most pissed-off Mini in the lineup. As a concept, it gets cool features like 3d-printed textiles, Union-Jack inspired taillights, and an aero kit designed to make all trailing edges resemble your trusty spatula. It’s cheeky, alright.

Bring on the Shows!

With all that is coming to us in early September, the 2017 auto show season is shaping up to be very exciting indeed.

We still haven’t seen what good old Detroit is cooking up for the coming year. Aston Martin has been on a roll with their sudden conviction for building hardcore sports cars. Lamborghini is determined to ride the wave of a top Nurburgring lap time as long as possible, and Ferrari is convinced that one year precisely is the perfect amount of time for a birthday party. Germany may be where the action is now, but the fun is only just beginning.

Scott Huntington is an automotive writer from Harrisburg PA. Check out his blog Off The Throttle, or follow him on Twitter @SMHuntington

Written By
CF Staff
More from CF Staff
If you’ve invested in a car for your business, that’s probably for...
Read More
0 replies on “10 best cars from the 2017 Frankfurt Auto Show”