What’s in a namesake? In the automotive world, apparently everything. Consider Ford. The company named after the original automotive mogul Henry Ford is a household brand from Detroit to New Delphi, known to the masses as the manufacturer of Mustangs, Explorers, Tauruses and, yes, even Focuses. One particular vehicle from the Detroit giant, however, is probably in a class of its own when it comes to the blue-collar crowd. We’re talking the F-150 truck. In production for decades, the 2017 line-up’s undisputed crown jewel is the 2017 Ford F-150 4×4 SuperCrew King Ranch.

What do the words “King Ranch” conjure up in your mind? If you visualize a rural pasture with cattle, horses and various objects to haul, you guessed right. Did you know that King Ranch is also a sprawling ranch in Texas that, oh, happens to be the size of Rhode Island? Everything is indeed bigger and badder in the Lone Star State … even the already formidable F-150.

Let’s just come up with a new market segment for King Ranch: How about ‘country luxury?’ (let’s hope someone hasn’t come up with it already, shall we?). It ain’t just a ride for cowboys with some money, although the truck will probably make you feel like Jerry Jones — even if it’s just in your head. We’ll get into the interior and what’s under the hood later, but suffice it to say: the King Ranch F-150 passes the eye test. Our tester got our jaws ajar on first sight with its beautiful Blue Jeans exterior color.

With chrome touches glistening in the sun, the car features a locking removable tailgate, caribou angular step bars and 20-inch chrome-like PVD wheels branded with the Caribou King Ranch logo. The chrome appearance package ($1,995) is a very desirable even if it is pricy, although adding a wheel well liner ($180) and spray-in bedliner ($495) won’t hurt the bank account as much.

Finally, for those that really want and can have it all: Opt in for the Equipment Group 601A ($3,780), which features power-deployable running boards, tailgate step and King Ranch Series. In a nutshell, Ford has made sure to include many moving parts, the sum of which take this truck to the next level of awesomeness.

Hop on to the saddle — err, inside the cabin of the King Ranch — and that good ol’ ‘country luxury’ feel is going to smack you right in the face. Don’t worry, it’s actually the exact opposite of, let’s say, a whiff of manure on a country road. Say it with me now: Java interior with mesa antique leather. Doesn’t that just sound comfy?

Ford also laced the King Ranch F-150 with an 8-inch CTR stack touchscreen, genuine wood accents and of course, the King Ranch-branded floor mats. Additional options include adaptive cruise control ($1,250), active park assist ($440), max trailer tow package ($1,195), and the Technology Package ($990), which may as well be a necessity for all tech-savvy cowboys and ranchers. The safety and technology definitely contribute to making the King Ranch a powerhouse truck.

The F-150 is a Ford truck. As such, its 3.5-liter V-6 EcoBoost engine isn’t remotely apologetic about its gas-guzzling. It isn’t made to appeal to the environmentally conscious, hybrid-loving crowd awaiting the alternative fuel revolution to save the planet or what have you. A powerful truck needs that good ol’ petroleum cocktail to make moves. Here, with a monster 36-gallon tank, you get 17 mpg in the city, 23 on the highway, average out to 20 mpg, and say ‘thank you, sir.’ 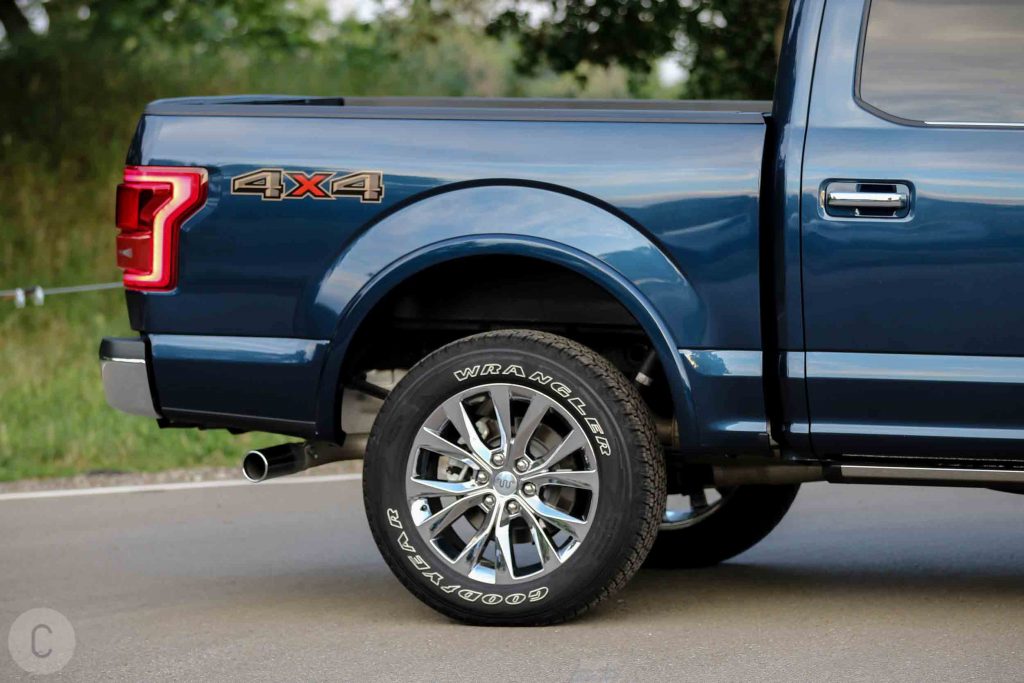 There’s really no terrain that the F-150 isn’t designed to handle. Designed to haul and serve as an all-purpose utility truck, the King Ranch edition takes something great and makes it Texas-sized. There’s little wonder why this particular edition sells so well in the Lone State State.

Our truck was equipped with a new and improved 3.5-liter V-6 EcoBoost engine that generates 470 lb.-ft. of torque and 375 hp. The new 10-speed automatic transmission is as efficient in helping the driver control all that power, whether in the lower gears or upshifting. It’s simply a marvel that the truck can get into 10th gear at 44 mph, a feature that surely boosts its fuel economy, which you’d think should be be relegated to afterthought. Ford jointly designed the transmission with GM and it definitely brought out the best engineering finesse.

There are a few options that discerning truck owners should know about. One, as much an start/stop system is a preferred feature luxury sedans, it’s a bit cumbersome in the King Ranch given the size of its engine. The good news is, it can be shut down with a kill switch.

Being a premium edition, the 2017 Ford F-150 4×4 SuperCrew King Ranch is accordingly costly. We are talking a starting base price of $53,704 that moves up to $64,724 with available packages and options tacked on. Not every feature is necessarily for everyone, of course, but there are some – like the appearance package – that all buyers would rather have than not have.

What we liked: The F-150 King Ranch lives up to its name. We can’t rave enough about the luxury and comfort of the cabin. We also appreciated the deft 10-speed automatic transmission, which a truck this powerful couldn’t do without.

What we didn’t like: Of course, the final price tag can be on the steep side for folks looking to save a buck, and that’s especially exacerbated when considering the fuel efficiency.

Competition: To be sure, there are other great truck offerings available. From Detroit automakers, we’ve got the 2017 GMC Sierra, which is is packed with great safety technology, and the the 2017 Dodge Ram 1500, which has comparable features and looks great.

However, the 2017 Ford F-150 King Ranch edition stands apart thanks to a confluence of factors: the exterior options, the luxurious cabin, the finessed transmission. Combined, these features make the King Ranch the default choice for Texas ranchers and anyone who looks up to them. This is a Ford truck, y’all.

Written By
Angel Mosqueda
More from Angel Mosqueda
The age-old question of whether size matters is relative when it comes...
Read More
0 replies on “2017 Ford F-150 4×4 SuperCrew King Ranch”