When you think Lexus, luxury sedans generally come to mind, right? That’s become the Japanese brand’s reputation, primarily because the company has its core competency down firm. However, the 2017 Lexus RC F has some serious cache to challenge German supremacy in the high-performance category. What the RC F doesn’t have in terms of history — in comparison to the BMW M4, Mercedes-Benz C63 AMG or Audi S5 — it surely gains in its specs, exterior, interior and, of course, performance.

In the crowded segment, which also features the Cadillac ATS-V coupe, the RC F is impressive for a car that debuted only two years ago. For 2017, the RC F sports car was nicely spruced up with standard adaptive dampers and a Scout GPS link, a smartphone app that displays driving directions on the car’s center screen.

Our tester came in the exquisite Caviar color, equally professing luxury and power. Sitting on 19-inch split ten-spoke forged alloy wheels ($850 upgrade) and premium triple beam LED headlamps, the car dripped with uncompromising swagger. Lexus also laced this RC F with a quad exhaust and cooling ducts to ensure that high-performance was on full display at all times.

The Radical Coupe – because that’s what Lexus calls it, seriously – is an amalgamation of several different vehicles from the Japanese automaker’s storied past. There’s a hint of the IS convertible, the SC model, and even the Scion FR-S. Yes, all of these served as an inspiration to this Lexus muscle car. Still, its curves are distinct enough to grace the car with a futuristic-minded contemporary sports car aesthetic.

We’d be remiss not to gush a bit about the RC F Performance Package, which Lexus clearly included to make this ride appeal to discerning performance enthusiasts. It’s an additional $5,500, but includes a carbon fiber roof that gives the car an added menacing edge but reduces weight and lowers the car’s center of gravity for more robust and responsive handling.

The carbon rear wing can be activated when the car gets up to 50 mph or more with a touch of a button. With this component enhancing aerodynamics, the car will respond with even more smooth power on those days you feel like showing off a bit. When you want to be more subtle, the wing quickly hides into the trunk lid. Made in the same workshop as the carbon fiber parts of the LFA supercar, the carbon rear wing is all about highlighting the RC F’s high-performance status.

The RC F also has an impressive Torque Vectoring Rear Differential that tailors to the driver’s preference on any given day. Choose one of the three modes – slalom, track and standard — and this feature distributes power between the left and right wheels while the RC F is turning. 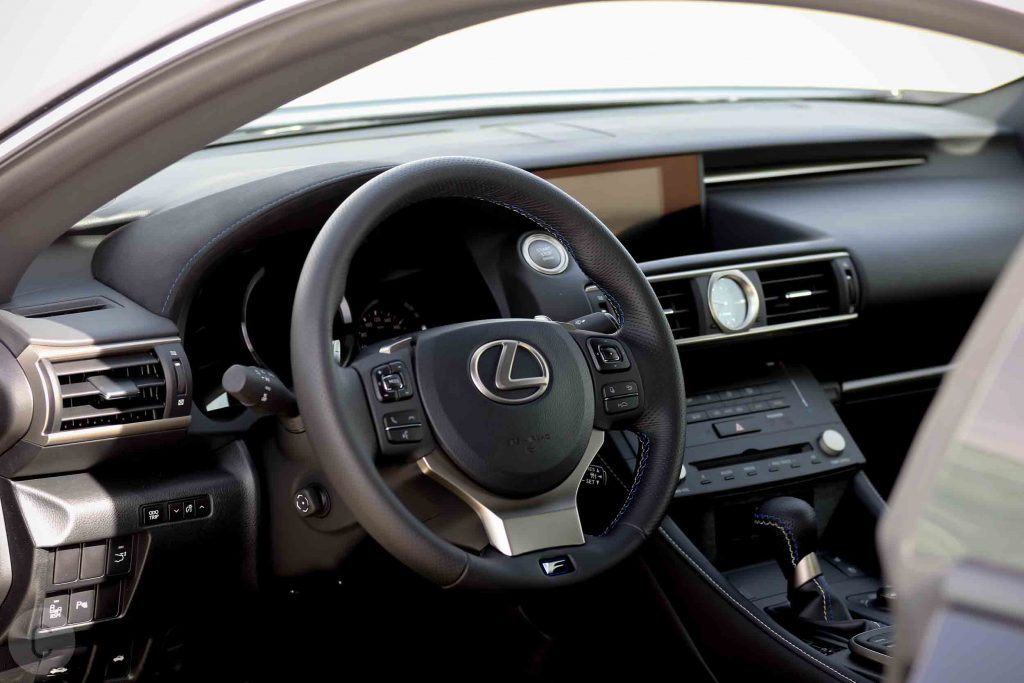 This is a Lexus, people. The company’s name may as well be a synonym for “luxury,” which is something we can’t emphasize enough. The 2017 Lexus RC F has the kind of plush interior that almost lends itself for endless Snapchat posts (vanity be damned!) The front seats fit the driver and passenger so snugly, you’ll feel cajoled making sharp turns. The sturdily padded material that covers the armrests and dashboard, meanwhile, is as easy on the eyes as it is great to protect the car from spills and the sun.

Let’s not forget the “F” emblem on the seats, too. We live in a visual society, with this subtle mark potentially having as much impact as the the exterior. The infotainment system isn’t too shabby in the RC F although we’ve got our qualms with the touchpad for audio and navigation. It’s a little clunky to operate and features the same-color icons, making it difficult to control while driving. 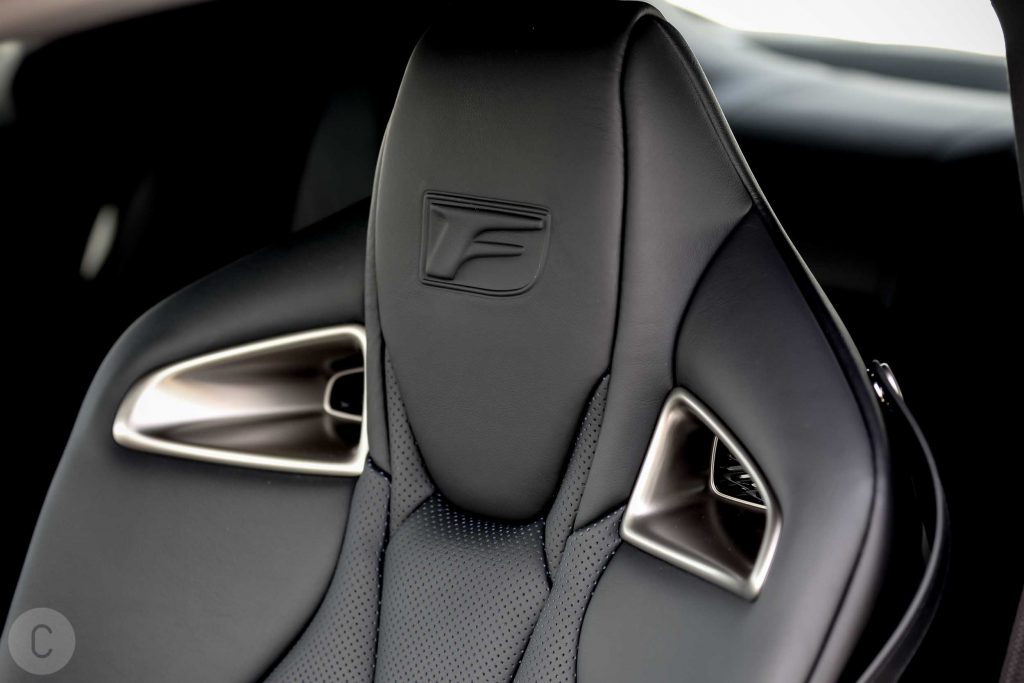 We do appreciate Lexus’ determination to up the ante in the luxury interior, but doing so even incrementally hikes the car’s price tag. The $2,550 navigation upgrade equips the car with a Mark Levinson Audio juggernaut that features a DVD/CD player within an 835-watt, 17-speaker, 7.1 premium sound system, plus a backup camera. Heated/ventilated front seats with driver seat memory, blind spot monitor with and park assist are included with a premium package upgrade, which will set the owner back another 3 grand. 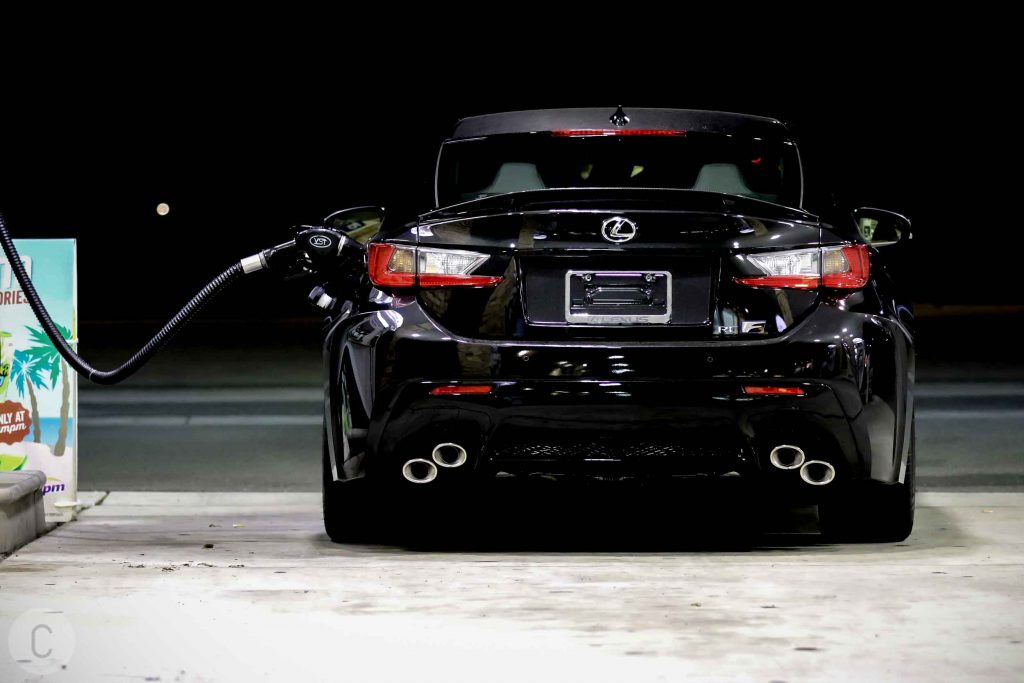 Performance coupes like the RC F aren’t exactly marketed using their fuel efficiency, and so, this car’s EPA numbers suggest that all that power means the car is fuel-greedy. The RC F gets 16 mpg in the city, 25 mph on the highway and averages out to 19 mph. Then again, when you buy this V-8 powered RC F, you are probably not looking at these numbers.

Lexus packed quite the punch into the 2017 RC F. With a powerful naturally aspirated engine, a transmission befitting a sports coupe, and a bevy of technology to bolster the driving experience, the car packs a gallop on and off the track.

There’s undeniable power and pure awesomeness in the naturally aspirated 5.0-liter V-8 that’s under the RC F hood. We aren’t mad at all at the beastly 467 hp and 389 lb.-ft. of torque either. This coupe in fact gallops 0-60 mph like a top NFL prospect does in the 40-yard dash – in 4.4 seconds. It’s an enjoyable drive throughout the rev spectrum, with the 8-speed sport-direct transmission opting into different drive modes for an efficient and robust performance.

In the automatic mode, the RC F’s g-sensor — included on the transmission’s shift control — determines when the car enters a curve and optimizes the response for acceleration. The 8-speed transmission is generally all about giving the driver the most options, as large paddle shifters are placed on the steering wheel.

Between the rear axle of the RC F is the torque vectoring differential, which is one enhancement that can be truly appreciated in track mode. Torque is distributed to fully maximize this car’s performance, which is definitely a good thing when considering the the RC F tips the scales north of 4,000 pounds. 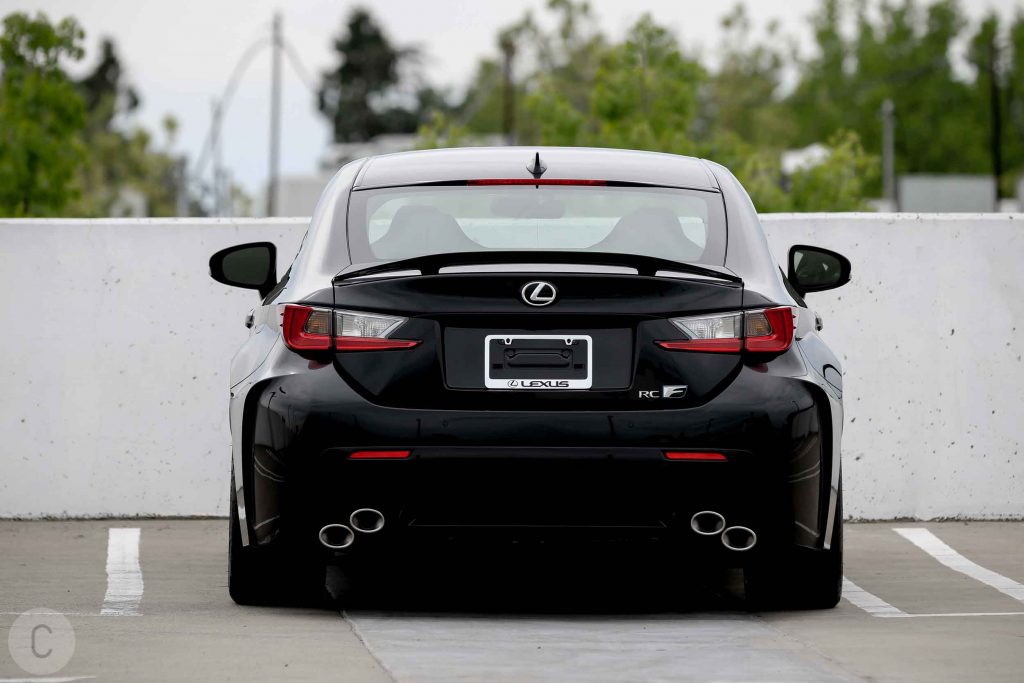 It’s almost indisputable fact that the Lexus RC F is a sexy beast. If you’re looking for a sporty car to get you around the city in style and turn more than a few heads in the process, this one’s right up there. With a base price of $64,165, however, it’s not exactly a bargain. With upgrades and deluxe packages, the price shoots up to $80,314, which may make buyers really mull their options.

What we liked: The chiseled and unique design – the carbon fiber trim on the Lexus sport cars is arguably a work of art in it and of itself – combined with the luxurious interior and a bevy of tech features contribute to the awesomeness that is the RC F. The powerful V-8 and the 0-60 time firmly place the car in the elite category.

What we didn’t like: For all things that makes the RC F a superb car, there’s still a few things that Lexus didn’t quite get right. The touchpad controller of the navigation system can be improved upon. Also, the car’s not quite as nimble as it could be. It’s definitely on the heavier side. The fuel efficiency for a sports car in this market segment is another big question mark, while the lack of a manual transmission option is yet another factor that Lexus missed out on to truly give the competition a scare.

And speaking of competition: the Lexus RC F is a fine car, but whether it can compete head-to-head with the BMW M4 and the Mercedes Benz C63 AMG is a very open-ended question. It’s as if the RC F is carving out an inherent underdog role for itself, which means that some will be champion it while others will marginalize it as an also-ran.

Written By
Angel Mosqueda
More from Angel Mosqueda
The Subaru Legacy is celebrating 25 years of automotive supremacy, and to...
Read More
0 replies on “2017 Lexus RC F”