Audi A3 redefines its class

I’ve had the good fortune to test drive about a half a dozen Audis over the past few years, and each time they’ve left the same impression on me: good, often very good, but never exceptionally memorable. Maybe it’s because I’ve never gotten behind the wheel of an R8, but I’ve been waiting for an Audi to really grab my attention.

Understandably, I had pretty high hopes when I found out I’d be test driving the all-new 2015 A3 1.8 TFSI, a car that – despite its small price tag – is supposed to usher in a new era of Audi success. The new A3 – which is setting the stage for an oncoming family of A3s, including a clean diesel and a convertible iteration – was aimed to defeat the Mercedes-Benz CLA-Class, and I was eager to get behind the wheel and see how it performed in this mission.

As always, the first thing noticeable about my tester was the exterior. The all-new A3 is a pretty typical Audi in this regard: it’s unlikely to turn many heads, but there’s virtually nothing to dislike about it. Even if you’re the nit picking type, you’ll have to get on your hands and knees to find any nits on the A3. The contours on the vehicle are stunningly smooth, yet the redesigned grille and headlights are far more sleek and aggressive than the past generations of Audis. I’ve often felt that Audi is not aggressive enough with its styling, but these new features – combined with the A3’s price and market – result in a pretty flawless design coming together in the A3. 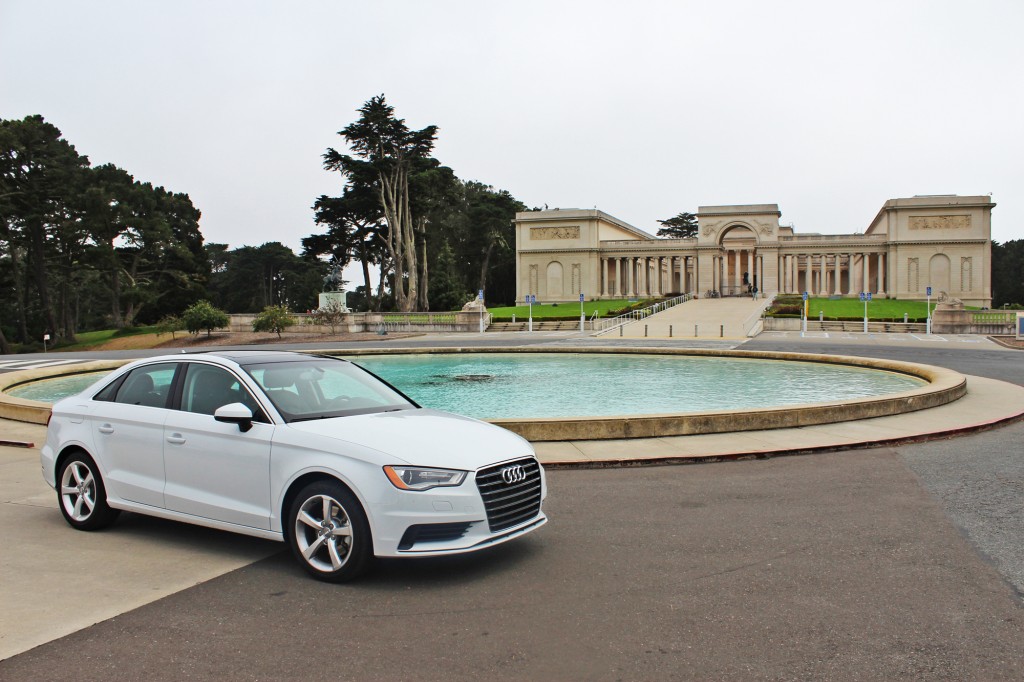 From the profile, it’s pretty easy to see that Audi and VW are siblings; and that’s not a bad thing. At more than six inches shorter than the CLA, my tester was pleasantly small: small enough to feel sporty, but big enough to still look like a sedan, not some awkward hatchback wannabe.

Open the door to the A3 and it’s all Audi, all day.

There are a few pedestrian points on the A3’s styling – the rims and the lips have a little bit of a Grandma and Grandpa feel – but on the whole, I was happy every time I looked out at my tester, and more than once found myself proudly getting in or out of it in public.

Open the door to the A3 and it’s all Audi, all day: ample and pleasant luxury, mixed in with a million and one exciting gadgets and technologies. It was from the inside of my 1.8 TFSI that I was most jealous of the owners of this fun sedan: I feel like you could live in the A3 for a few months and still be surprised at some of the features that you can access from inside the cabin. My tester was equipped with the MMI Navigation Plus system, which came at the relatively fair cost of $1,900.

After getting myself familiar with the system, I was impressed with how gracefully it handled both voice and touch commands.

After getting myself familiar with the system, I was impressed with how gracefully it handled both voice and touch commands; Mercedes-Benz and BMW would be wise to take some pointers from Audi in this department. The Navigation Plus gave my tester a larger info screen than the stock A3, and I would highly recommend it. It seems like it wasn’t that long ago that we were watching TV on screens smaller than this in-dash navigation screen. Add that to the awesome 4G LTE connectivity, and the always impressive 14-speaker Bang & Olufsen audio system, and you have a techie’s dream cabin. 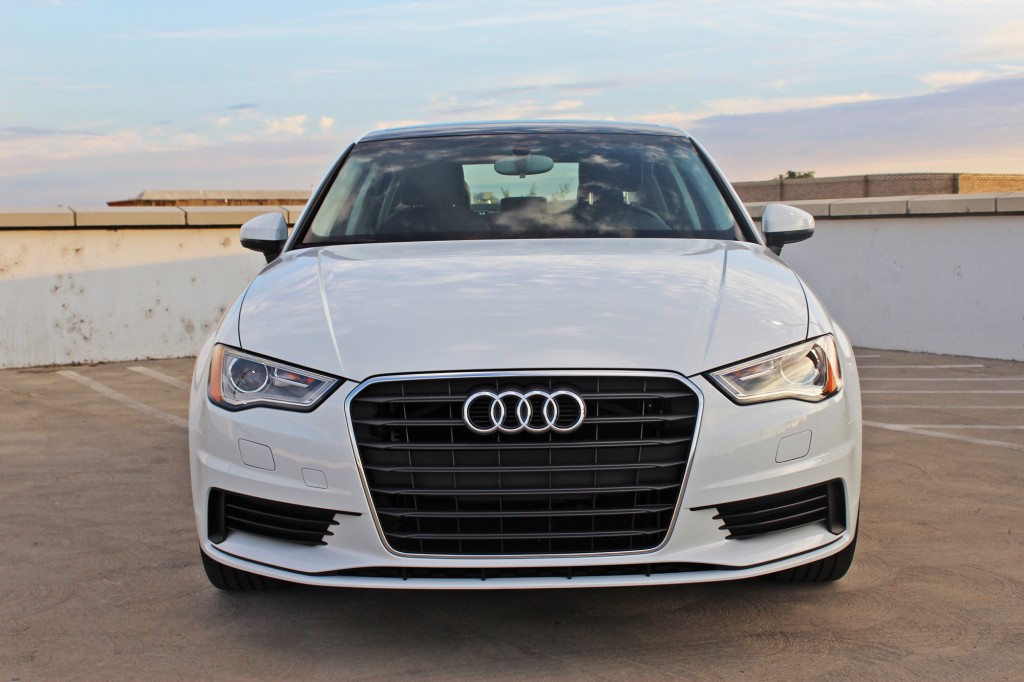 Also impressive is the backseat, which is surprisingly roomy for such a small vehicle. Despite the aforementioned length of the A3 – more than six inches shorter than the CLA – my tester had dramatically better back seat space than the CLA that I recently drove. The trunk space is also impressive for a car of its size, and can be increased with the folding rear bench, though that wasn’t necessary for me: I took a weekend road trip to the Bay Area with the family (two adults, two kids), and had plenty of room for the four of us, with the luggage comfortably in the trunk. Even with the amount of souvenirs that the kids grabbed at our stop at Six Flags in Vallejo, the trunk was never pressed for space.

The A3 comes standard with a moonroof over the front seats, which helps the cabin feel larger than it actually is.

The A3 comes standard with a moonroof over the front seats, which helps the cabin feel larger than it actually is. I’m not always a fan of moonroofs, but the size of Audi’s (it’s quite ample), mixed with the fact that Audi had the good graces to make it a standard feature, made me a convert. Driving through beautiful San Francisco and San Jose on our road trip, the moonroof was used often (needless to say, the kids loved it) It was big enough that we were able to get some awesome pictures of the Golden Gate Bridge from inside the car, to go with the photo shoot we did near the gorgeous bridge.

That said, it wasn’t all peaches and cream in my tester. Though the front seats were comfy for short drives, my body was less than happy with them after a drive of an hour. They are 12-way power adjustable, and advertise lumbar support, but my back remains unimpressed. The ambiance of the interior is mostly nice, though there’s a little more stock plastic and empty spaces than I would expect from a luxury vehicle. 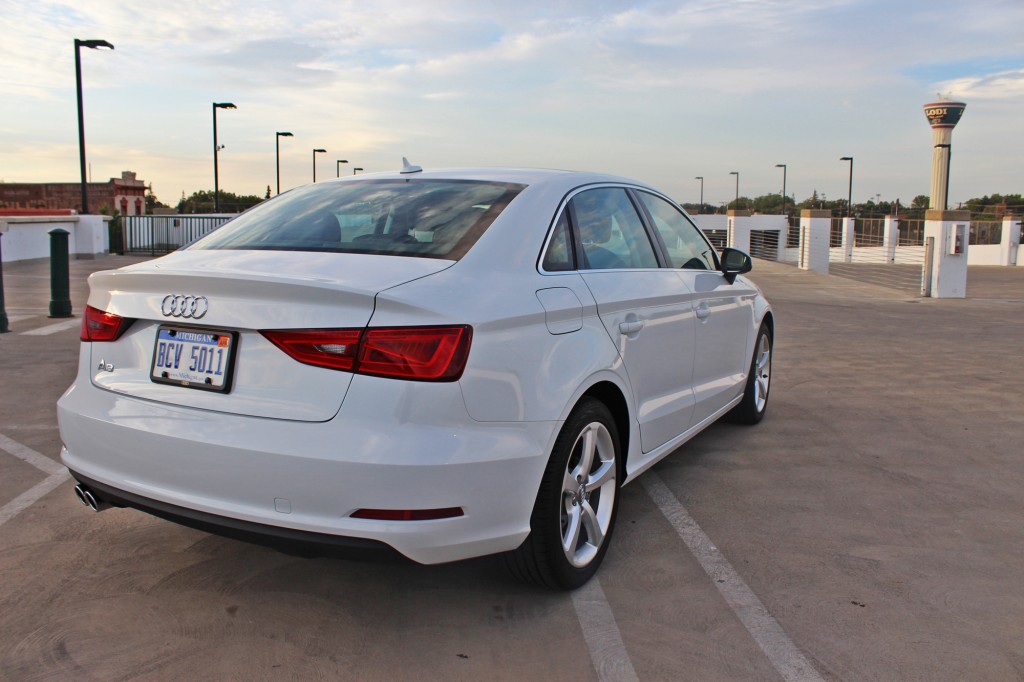 My tester came with the Aluminum Style Package, which adds aluminum interior accents, mistral inlays, and window surrounds; this was a very welcome package, as it completely transformed the interior of my tester (I sat in a standard A3 at the dealership, and the difference was well worth the $450 cost of the package). That said, for as happy as I was that the moonroof was a standard feature, I was equally disappointed that Audi couldn’t make the standard interior a little more interesting. You shouldn’t have to pay extra for a package to make a luxury vehicle feel . . . well . . . luxurious.

Still and all, the A3’s cabin is a net positive, and definitely a step up from the CLA. It’s easy nitpick, but when the time came to give up my tester, and get back in my daily driver, I realized just how much I loved the inside of the A3.

Audi has kept the car small and light enough that you can feel each of those horses – and maybe even a few that aren’t there.

With my eyes quite happy with the A3, and my technical senses quite impressed (even if my butt and legs weren’t the happiest), it was time to try my test vehicle out on my most important parts: my right foot, and my two hands. The A3 1.8 TFSI packs a fair bit of punch: 170 hp, and, more importantly 200 lb.-ft. of torque. Better yet, Audi has kept the car small and light enough that you can feel each of those horses – and maybe even a few that aren’t there. For the most part, I loved the transmission – a 6-speed S tronic dual-clutch automatic. The purist in me was disappointed that there’s no traditional manual option, but the market dictates these decisions, and it probably would not have been a frequently chosen option, as much as I would have enjoyed it. 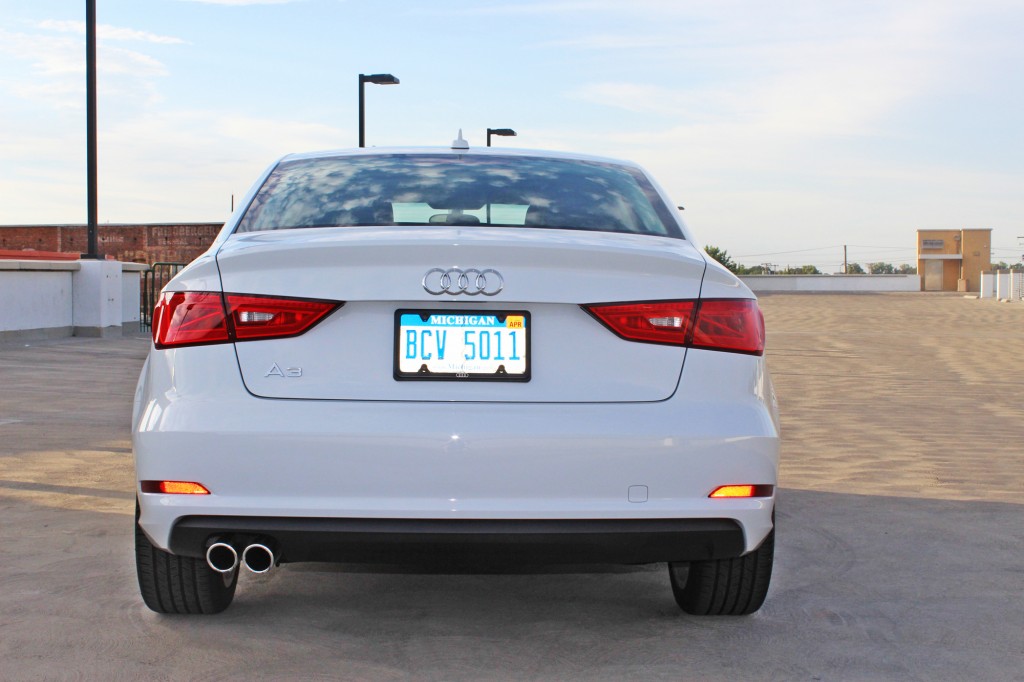 The transmission makes day-to-day driving less than exciting, but thankfully there’s a Sport Mode (complete with paddle shifters), that made my tester an absolute blast. The S tronic handled city driving relativity gracefully, but it made its money when I hit the open road.

Despite being front-wheel drive, it had no problems with me throwing it around turns: in fact, it encouraged it.

Matter of fact, that’s where the car on the whole made its money. Normally turns are the nemesis of an Audi; the past models that I’ve driven have handled okay, but certainly not anything I would describe with the all-important automotive f-word: fun. My A3 tester changed that. With steering far more precise than the Audis of old, I enjoyed pushing the limits of me test vehicle (don’t try this at home, kids). Despite being front-wheel drive, it had no problems with me throwing it around turns: in fact, it encouraged it.  And when I pushed the gas pedal a little harder, and watched the speedometer quickly climb, the only annoyance was the increase in cabin noise.

The four-link rear suspension and the electronic stability control both helped the car absorb the road with aplomb; I wasn’t taking it on the most maintained of roads, yet I never would have known it from the driver’s seat. 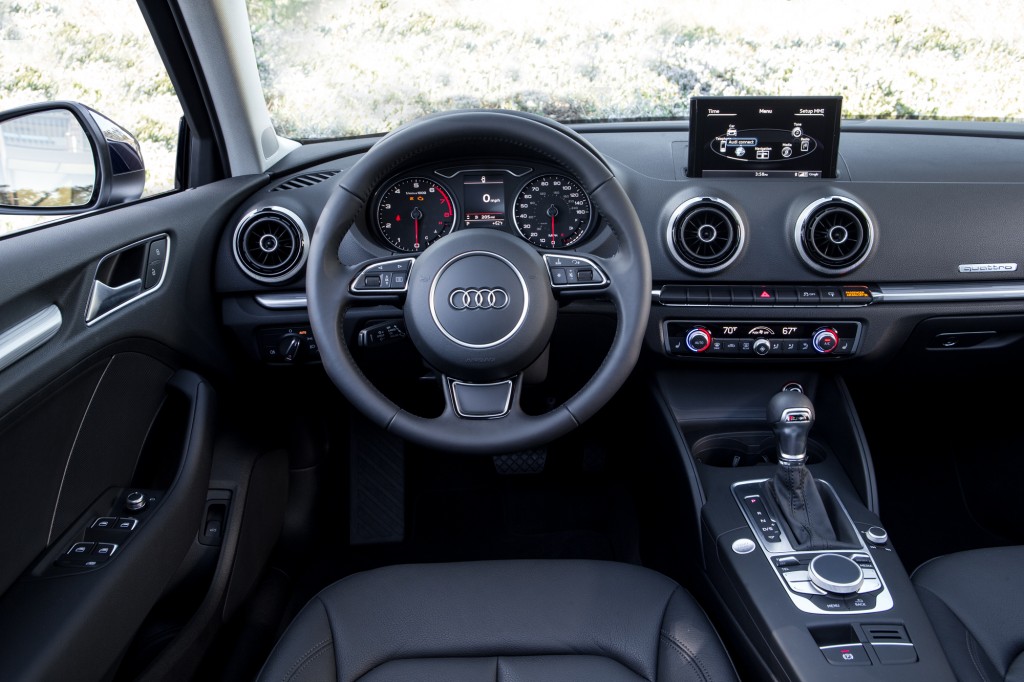 Braking and acceleration were not head-turning, but they were plenty good enough; I have no complaints there. If I had to sum up my overall impression of the driving feel of my test car, it would be this: I’ve never driven a cheaper Audi than the A3 1.8 TFSI . . . and I’ve always never driven one that was as enjoyable, either.

I’ve never driven a cheaper Audi than the A3 1.8 TFSI . . . and I’ve always never driven one that was as enjoyable, either.

Bringing it all together is the gas mileage: EPA-estimated 23 city, 33 highway; on my road trip (which was a fair share of both city and highway), I averaged just over 30 mpg. I was having fun driving the car, but also staying within speed limits, given the kids. Ironically, the 1.8’s older brother (the 2.0 TFSI quattro) gets slightly better mileage. I’ve yet to get my hands (and feet) on one of them yet, but given that it has significantly better power, I’m guessing it’ll be a pretty darned good car.

With an MSRP of $29,900 (my tester was $33,300), the A3 1.8 TFSI is, in my eyes, a solid win when pitted against the Mercedes-Benz CLA-Class. It’s not great in any one category – but then again it’s an entry-level small luxury sedan. It’s not supposed to be great; it’s supposed to be solid. And there’s no better word to describe the all-new A3 than solid.

Written By
Angel Mosqueda
More from Angel Mosqueda
Anniversaries make for a jubilant celebration, and Lexus is certainly not one...
Read More
0 replies on “2015 Audi A3 1.8T”