Something to brag about

Audi, and their parent company Volkswagen are leading the way in reviving the use of diesel fuel in the United States. They’re quite proud of this technology. This pride was quite apparent when my tester for the week was dropped off to me, and the words Clean Diesel TDI were emblazoned on the side of the 2014 Audi Q7. I’d never gotten a test vehicle with such blatant advertising on it.

You think they wanted me to know that this was a turbocharged diesel engine or something?

The 3.0-liter TDI clean diesel engine, which was new for the 2013 model year, makes 240 horsepower. That number by itself seems unimpressive for a seven-passenger SUV. But when you see the torque that is produced (to the tune of 406 lb.-ft.), you realize the Q7 is served well by the turbo diesel. 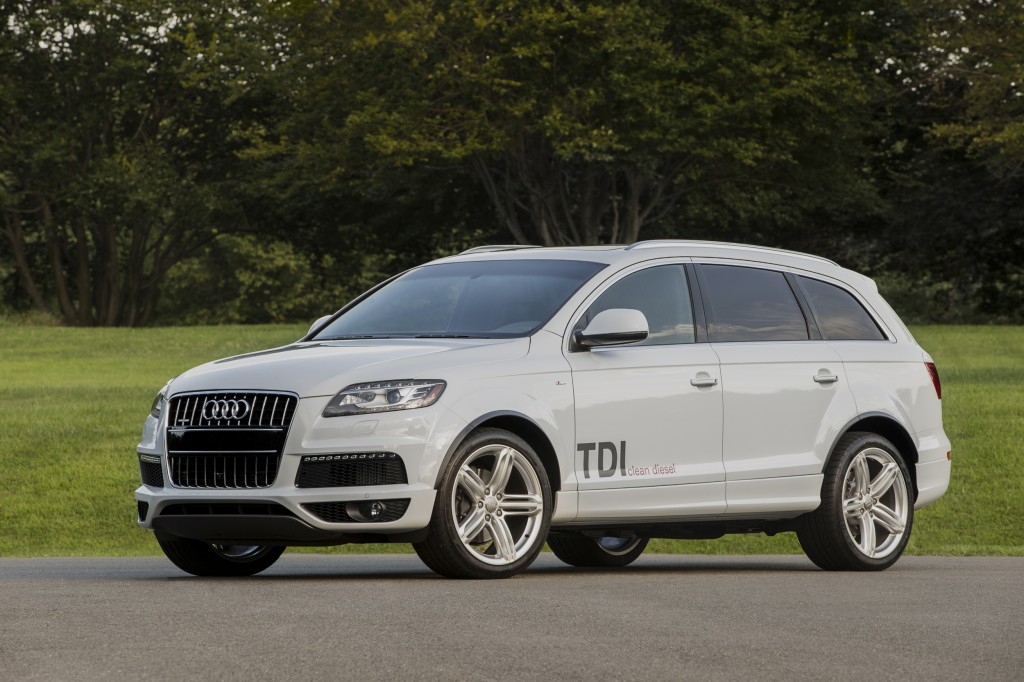 Mated with Audi’s 8-speed tiptronic automatic transmission and the quattro all-wheel drive system, and the Q7 can hold its own against any rival. Anytime you get behind the wheel of an Audi, you expect a sporty, fine handling and luxurious ride.

And the Q7 does not disappoint in this regard. With a double-wishbone suspension and adaptive air-suspension system, ride comfort is unbelievable. Road noise, including the diesel engine, is minimal. This was pleasant, as diesel engines tend to be noisier than gasoline. No one has coined the phrase clean and quiet diesel yet.

The looks of the Q7 remain similar to the previous model year. Little was changed in this model year, but Xenon headlights were added as were LED daytime running lights. Audi already possesses one of the most distinctive lighting styles on the market, and the Q7’s lights are bolder and more distinctive than ever.

Anytime you get behind the wheel of an Audi, you expect a sporty, fine handling and luxurious ride.

21-inch wheels give the Q7 a bold and aggressive posture. This is part of the S-line package, and comes as a premium add on. 19-inch wheels are the standard size. As is the case with most Audi vehicles, the customer can customize the vehicle with various options including special paint finish and chrome accents.

Inside, the Q7 shows off its Audi distinction with ample luxury. In addition to precision tuning of the Audi engine, the interior details are something that Audi takes pride in. The Q7 carries on that tradition. Leather seats are comfortable and come with numerous seating configurations and four-way lumbar adjustment. The seats are soft and comfortable. 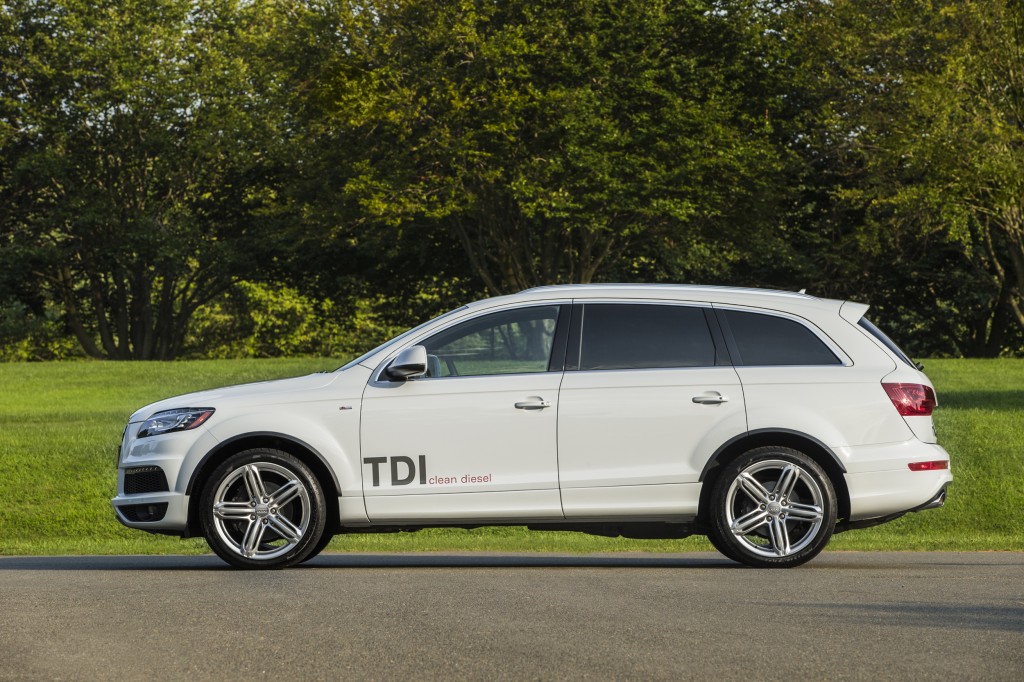 A three-panel panoramic sunroof is gigantic and spans the entire vehicle. This trend is common in many vehicles, but in the Q7 it really stands as a nice feature, flowing light and air into the vehicle. It’s definitely a nice selling point, and less of a gimmick.

With 72.5 cubic feet of storage space (when second and third row seats are folded flat) the Q7 is versatile. With all seats back up in place, headroom and legroom are sufficient, although third-row passengers may feel somewhat cramped. Leave the third row occupancy to the kids and everyone will be happy.

In a week’s worth of driving I sipped along at a rate of 24 mpg and never once had to refuel the vehicle having used less than a half a tank of fuel.

Audi leads the way in interior technology, and features like a Google-Earth based navigation integrates with the Audi Connect system. A well organized, and clean infotainment system is driven by a joystick, which can be cumbersome to use. This feature is in many Audi vehicles and I’m not a fan of it in any of them. It is touchy and takes the driver’s eyes off the road. The Bang & Olufsen Advanced Sound System boosts the entertainment quality significantly. For true sound quality, enjoy numerous speakers (some which rise out of the dashboard, to blast you with fine sound quality. This, of course, does come at a previous upgrade cost.

With the three letters of TDI in such prominence on the side of the Q7 (note: in retail models this is not there, and was only a marketing ploy for journalist fleet vehicles), Audi could’ve put a big number 28 next to it. The 28 is the EPA rating for the highway in the Q7. With a 19 city and 28 highway rating, the Audi Q7 goes to the top of the seven-passenger segment in regards to fuel economy. In a week’s worth of driving I sipped along at a rate of 24 mpg and never once had to refuel the vehicle having used less than a half a tank of fuel. 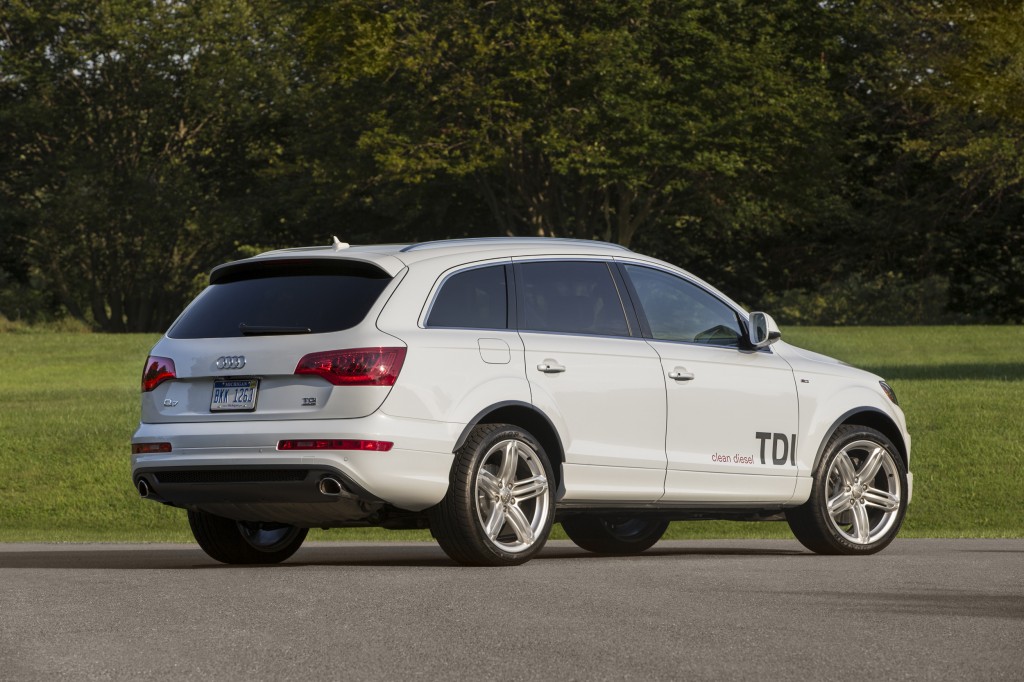 One of the most frustrating things about Audi is the pricing structure. Sure, technically, the Q7 has a starting price around $50,000 and my TDI trim had a starting MSRP of $52,900, but to add the features you really want can start to add up. For example, adding the Prestige model (which comes with lots of bells and whistles) adds another $12,000 to the sticker. Add the great sound system and you’ve plunked down another $6,300. Even more options added to my tester took the final price of the 2014 Audi Q7 to $81,795 (gulp).

Audi has a lot to be proud about with the Q7.

Audi has a lot to be proud about with the Q7. They’ve managed to create a smooth-riding, well-powered, fuel-efficient, luxurious seven-passenger SUV.