Every time Audi introduces something with the letters “RS” in it, I get an unidentifiable sensation in my stomach; it’s a similar feeling to the one I used to get when watching Michael Jordan play basketball. It’s a feeling of excitement, and a little bit of curiosity.

Enter the 2013 Audi RS 5.  Or, I should say, the car designed specifically to best the BMW M3.  They obviously won’t publicly admit it, but let’s be honest: Audi was gunning for the Bavarians with this car.  But did they succeed?

Let’s start with the looks, as that’s the first thing that anyone will notice.  They say you only get one chance to make a good first impression, and Audi took that to heart.  There’s nothing wild or even incredibly noteworthy about the RS 5’s design, but it is generally without flaws.  It doesn’t visually stand out quite the way that the M3 or the Mercedes-Benz C63 AMG does, but it doesn’t offend, either.  While I’m young enough to be a fan of aggressive design, there are older car enthusiasts who surely have been put off by the M3’s street-racer inspiring look.   That’s not a problem with the RS 5, not because it’s boring per se, but rather because it simply doesn’t take too many chances aesthetically.

The most notable aspect is its sizable front grille, which takes some getting used to, at which point it becomes wildly attractive.

But make no mistake, Audi intended for the “RS” to be highlighted in the design; the car is notably more aggressive looking than its less sporty brethren such as the A5.  The most notable aspect is its sizable front grille, which takes some getting used to, at which point it becomes wildly attractive.

Honestly, the thing that struck me the most about the RS 5’s style was that the Sepang Blue looked so sexy on it.   Ever notice how every Mercedes-Benz is black, white, or one of a million variations of silver?  That’s because the cars simply don’t hold up to color well.  The RS 5, on the other hand, couldn’t be different.  I’ve now seen it in this blue and the Misano Red, and the car looks absolutely stunning in each.  Trivial detail?  Sure.  But I certainly appreciate it. 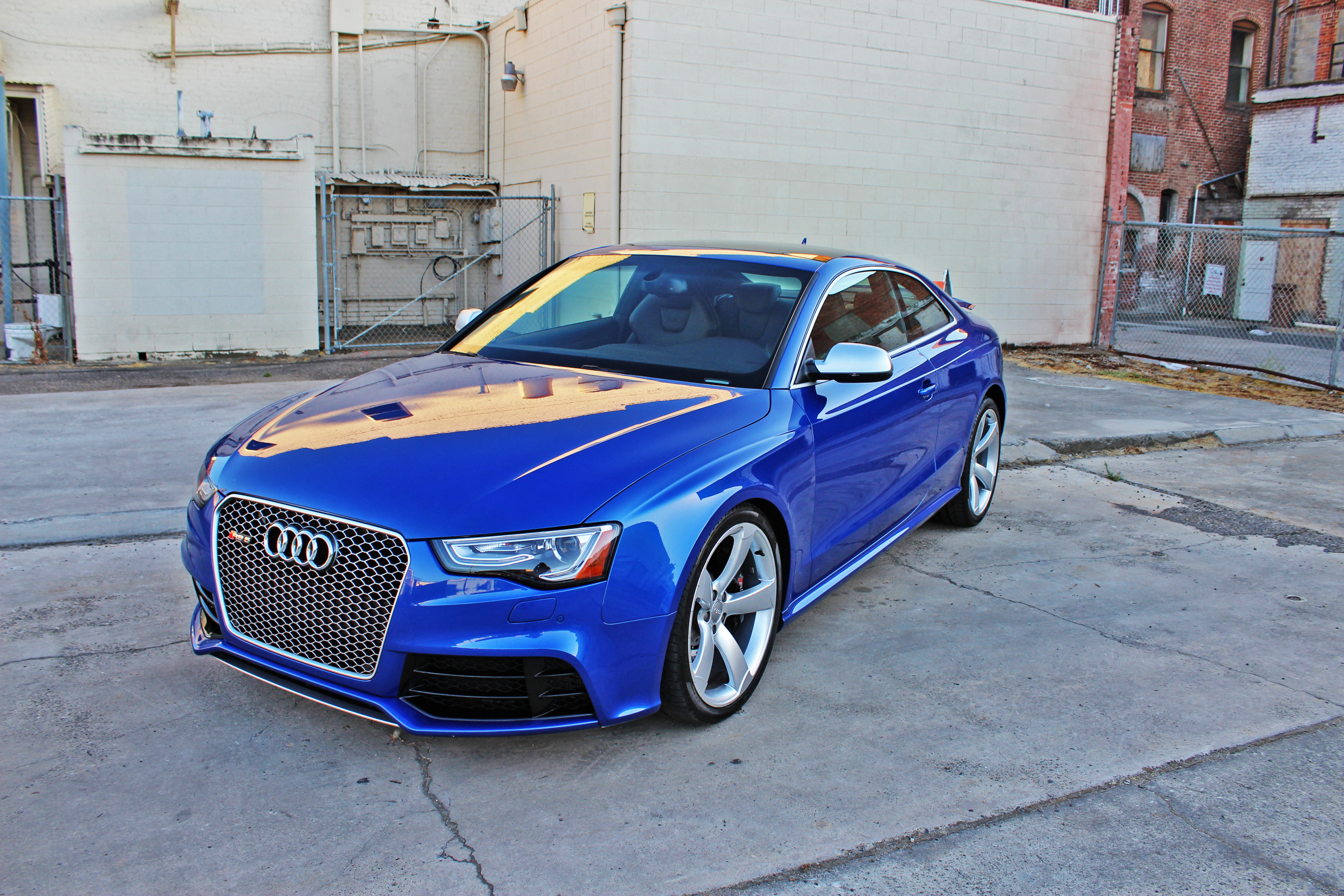 As we’ve come to expect, Audi absolutely nailed the interior of the RS 5.  The black leather interior was pure bliss, reminding you that you are indeed in a luxury vehicle.  But the seat piping and carbon fiber accented dash remind you that you’re also in a sports car.  Audi sought a balance between luxury and performance in the RS 5, and from the inside looking out, they couldn’t have done a much better job.

The black leather interior was pure bliss, reminding you that you are indeed in a luxury vehicle.

The MMI navigation system offered a handy quirk: the first ever Google Earth integration. It takes a while to get used to this feature, but it quickly becomes handy (and also just a lot of fun).  Audi also caught up to the times with the RS 5, as it is the first model from the company to offer Wi-Fi integration,  a very useful addition. 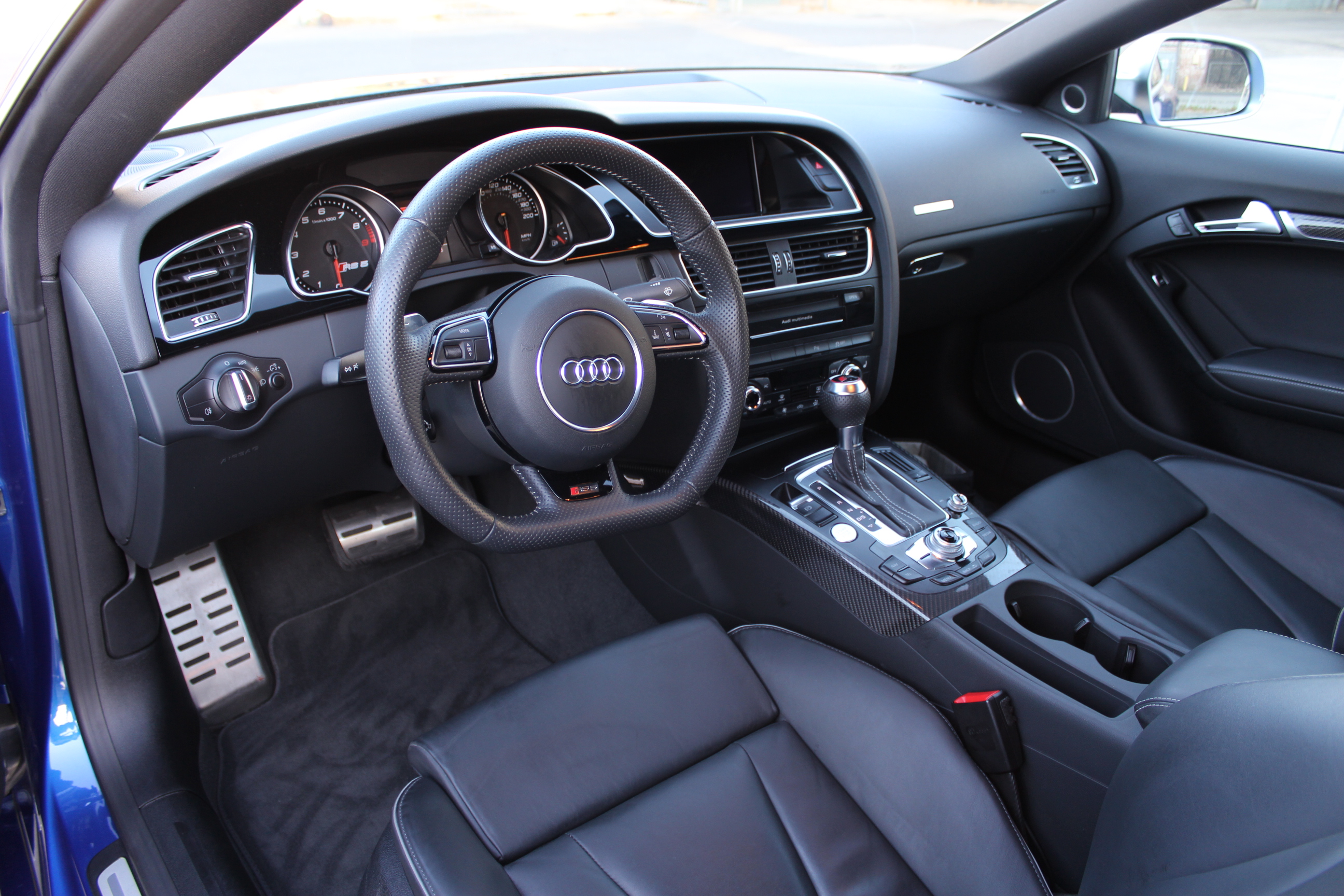 But of course, anyone buying an RS 5 is as concerned with what’s under the hood as what is elsewhere.  Here the Audi is right in line with its competition, offering a 4.2-liter V-8 with 450 horsepower, and 317 lb.-ft. of torque. The naturally-aspirated engine jumps from 0-60 in 4.5 seconds, though the mid-level acceleration is really what makes this car a joy to drive.  The engine is paired with an equally impressive 7-speed S tronic transmission that offers you fully automatic mode, or paddle shifting.   Choose the latter and you will not be disappointed.

The naturally-aspirated engine jumps from 0-60 in 4.5 seconds, though the mid-level acceleration is really what makes this car a joy to drive.

Where Audi has failed to match its BMW counterparts in recent years – at least for their sporty models – has been in handling.   Audi has made adjustments to the handling of the RS5, and it is a completely different animal than previous models.  And equipped with the 20-inch wheels and summer tires, it truly hugs the ground. 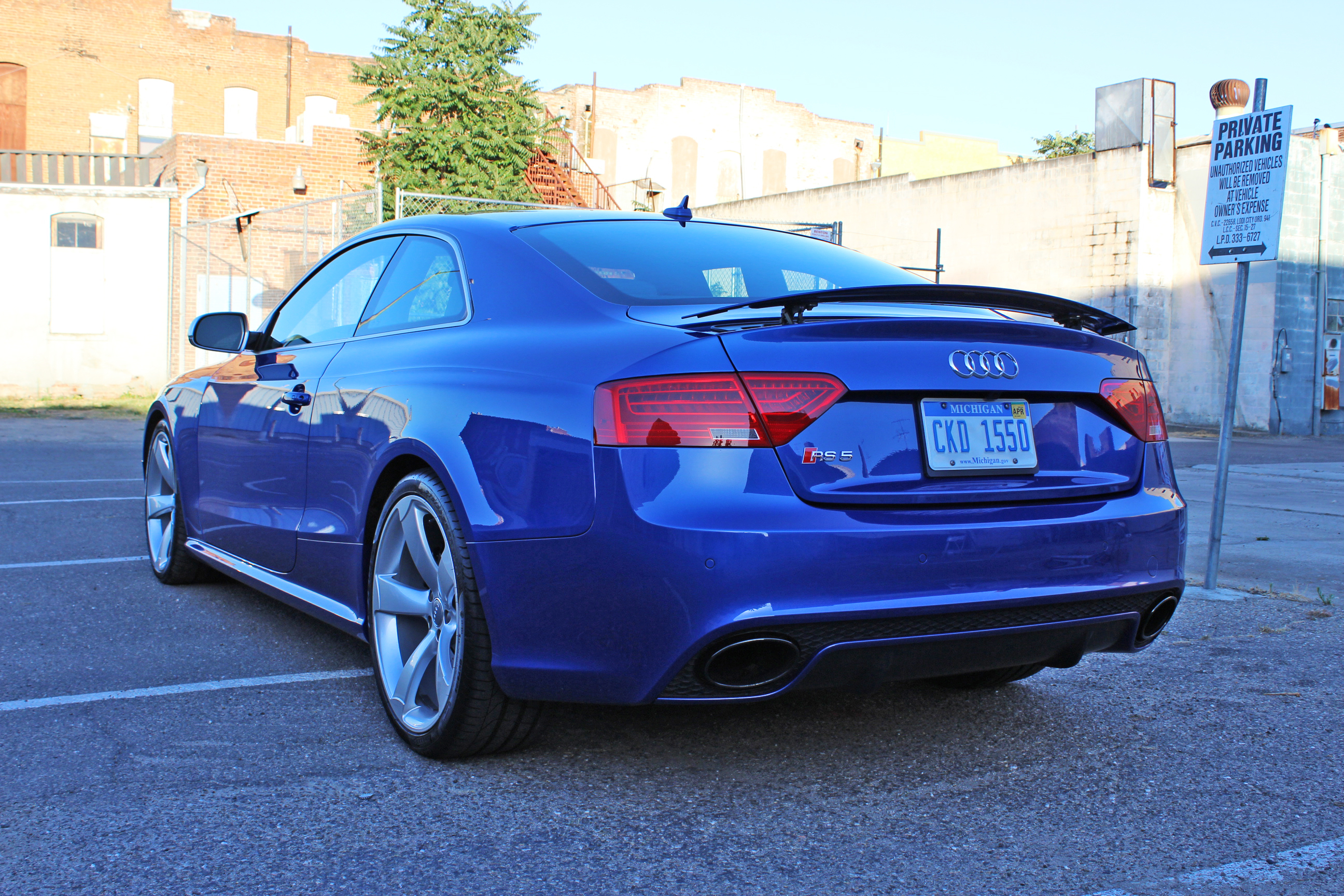 Fuel economy remains a weak point, as the RS 5 is 16 mpg city, 23 highway, and 18 combined.  But if fuel consumption is your main concern, there’s probably another Audi for you. This one is all about getting behind the wheel, letting lose 450 horses, and heading down the highway, listening to the engine purr (with the sports exhaust system it sounds like a sports car when you want it to, but without being noisy when you’re cruising).