This truck is big, bad and full of Japanese finesse

When you think Nissan, a truck is probably not the first thing that comes to mind. That’s because the Japanese company has honed on the compact sedan market and its Sentra has given Honda Civics and Toyota Corollas a run for their customer’s money. With a redesign and improvements that shifted the car closer to the company’s full-size sedan offerings, the company’s market share in America reached 10 percent this year. But what do you do if you’re Nissan and want to show the world you’re not a one-trick pony? The blunt answer is, you go big, you go Titanic — and strip the ‘ic’ and hope you don’t sink, of course.

It’s with these aspirations that in January 2015 Nissan unveiled the second-generation full-size Titan, as big an underdog contender to the segment-leading Ford F-series as any other truck out there. Nissan rolled out the heavy-duty XD to showrooms first and a half-ton crew-cab version powered by a 5.6-liter V-8 engine soon followed. Today, expanded choices includes single- and extended cab models and bed variations of 5.6, 6.6 or 8.2 feet. 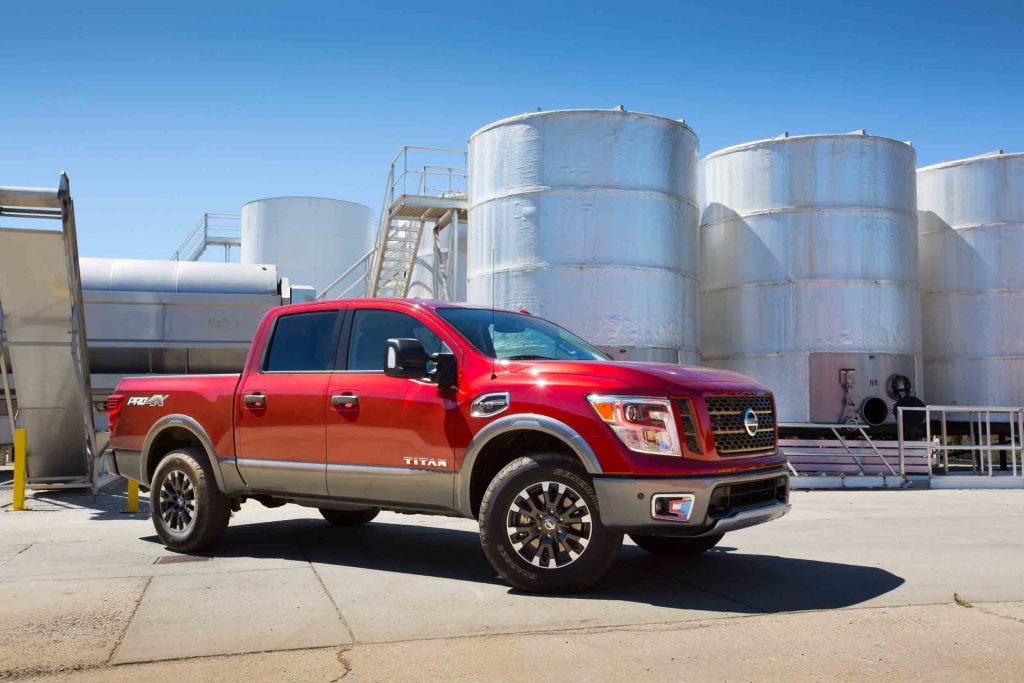 The 2017 Titan is definitely big on the optional ware, featuring three separate packages that combined offer an insane combination of gadgets and luxury touch. The truck sits on 18” by 8” aluminum-alloy two-tone wheels wearing P275/70R18 all-terrain off-road tires (as if we need to remind you: This is AWD that can conquer mountainous terrain). 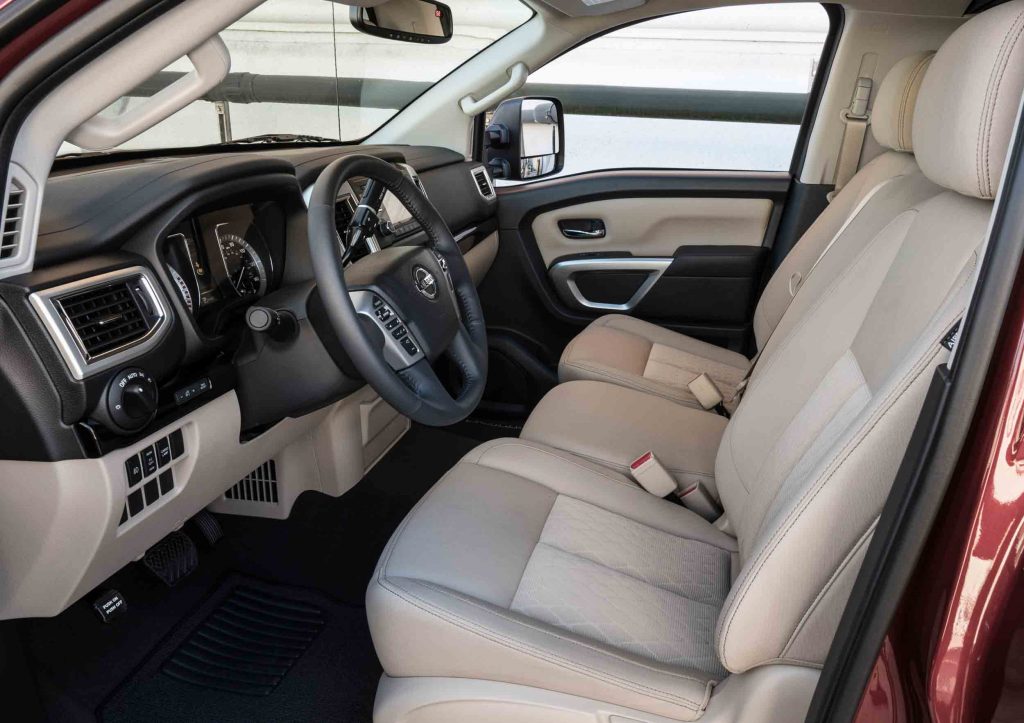 The Pro-4X Convenience Package ($3,520) offers the features that are useful for most truckers — more in the practical than vain sense. For the luxury hounds, there are leather appointed seats with contrasting stitching and Pro-4X embroidery. Other neat features are remote engine start, compass on navigation display, NissanConnect Services powered by SiriusXM and one of our favorites: Auto-dimming rearview and outside mirrors.

Nissan made sure the Titan isn’t just a big truck to haul things around in. Because life happens, safety is important and key safety features we liked that are sure to be appreciated in truck owners are blind spot warning with rear cross traffic alert and the 4-wheel anti-lock braking system.

The Titan is a pretty big truck and to maneuver it around highways, freeways or around narrower streets, these features are nice to have. Don’t be confused: Fancy names like “Nissan Vehicle Immobilizer System” and “Electronic Brake Force Distribution” are engineer-speak for features that make sure you and your passengers don’t shake in your boots during that sudden stop. 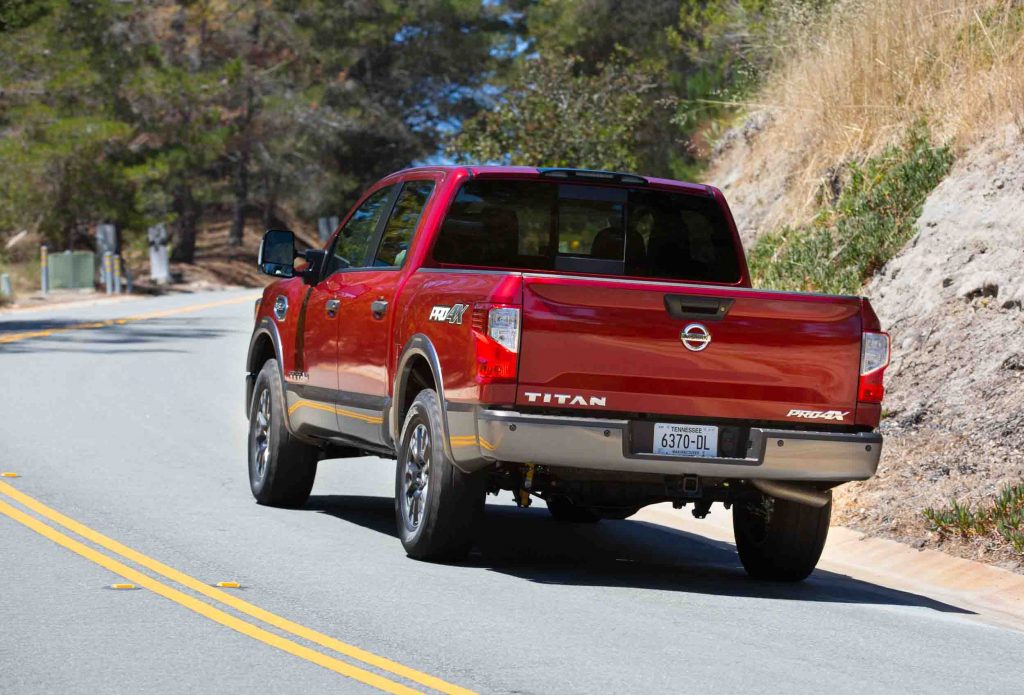 There’s no need to beat around the bush: Titan and most heavy-duty trucks are poster boys for gas guzzlers. The Titan’s 15 mpg city, 20 mpg highway and 17 mpg combined is to be frowned upon, sure. But this isn’t a Prius we are talking about. It’s a truck, and a rather large one at that. It’s almost ridiculous to expect fuel economy in this class of trucks.

The Titan we tested had a powerful 5.6-liter Endurance V-8 engine under its hood and we couldn’t be more excited about taking it out for a spin to see how well it works with the 7-speed automatic transmission and the shift-on-the-fly 4WD system. We’re here to tell you: you’ll feel that 390 hp and 394 lb.-ft. feet of torque every time you’re behind the wheel.

Titan definitely packs a punch thanks to the Nissan DOHC V-8, and the engine is as smooth as it is responsive. Four-valve combustion chambers, variable intake-valve timing and lift plus direct fuel injection add up to the special sauce here. We loved how the engine revs up to 6,000-rpm smoothly at the behest of the Jatco-built 7-speed automatic transmission, which has a rocker switch for manual operation and towing-mode button.

The Titan holds up well on off-road as well on highways with its effortless tuning and power steering, while Bilstein gas-pressure shocks definitely provide for a smoother ride over rough terrain. 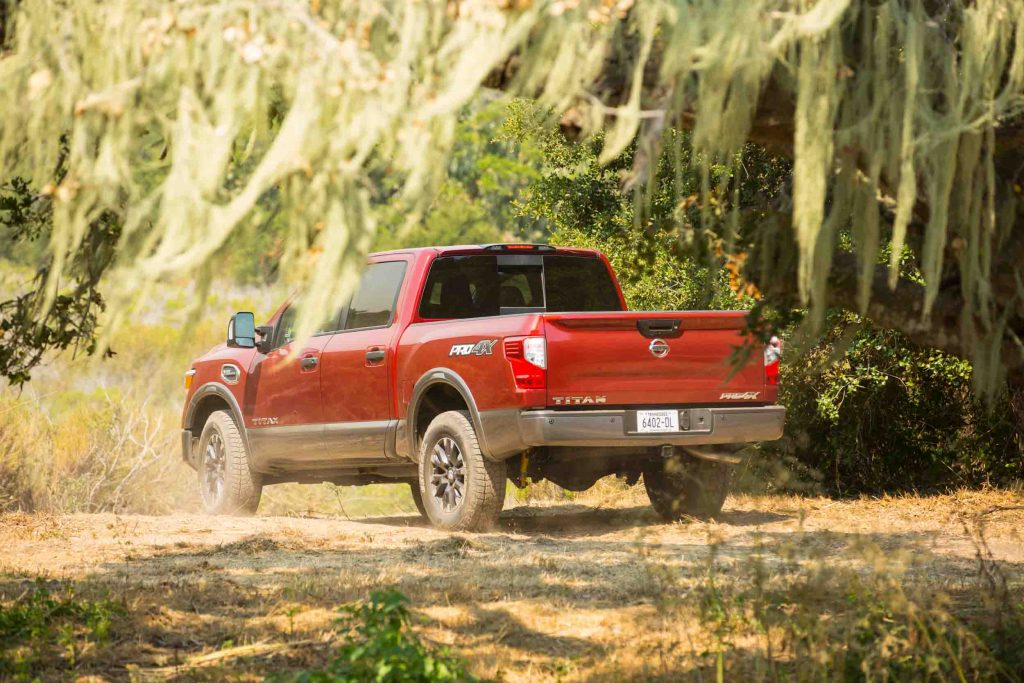 What we liked: the Titan’s powerhouse V-8, well-crafted interior with a bevy of tech and safety features that make it very fun; this being a heavy-duty truck at the core, it’s towing and payload abilities certainly hit the mark.

What we didn’t like: Fuel economy in this truck could improve greatly; the high cargo bed is a bit awkward; some safety features that other trucks in this class are outfitted with are not available here.

Frankly, the Titan’s closest and most formidable rivals are the Chevrolet Silverado and the Ford F-150. Choosing the 2017 Nissan Titan Pro-4X V-8 4×4 Crew Cab over them is not a clear-cut decision by any means, primarily because both of the trucks are made by legacy auto brands and entrenched in the market so well. Still, the heavy-duty truck market is not static and there’s always an opportunity for a newcomer to shake things up. Everything in the Titan suggests that its chances to do just that are there.

Written By
Angel Mosqueda
More from Angel Mosqueda
The full-size luxury SUV from Lincoln has not received much respect in...
Read More
0 replies on “2017 Nissan Titan Pro-4X V-8 4×4 Crew Cab”