Want to hear a funny story? Check this out: When the National Basketball Association’s Cleveland Cavaliers closed in on Goodyear to advertise on players’ jerseys during the upcoming a season – a first for the franchise – the team’s CEO joking mentioned that the partnership made sense because ‘the shoe fits.’

As it turns out, the ‘shoe’ line was actually grounded in reality. The Goodyear Tire and Rubber Company, founded in 1898 and based in LeBron James’ hometown of Akron, Ohio, is more known for its blimps and tires than shoes. However, it quietly manufactures and market those things we wear on our feet, and apparently, not just for vanity reasons.

There are several models of shoes to choose from, but we had the pleasure of trying out the Goodyear Ori. It’s a very simple, straight forward white-and-black casual shoe that’s perfect for any activity, from a morning stroll to a night out on the town or a couple rounds of golf. Shoot, wear it to a Cavaliers game? Perhaps put it on when you’re driving your sports car to any of these activities. 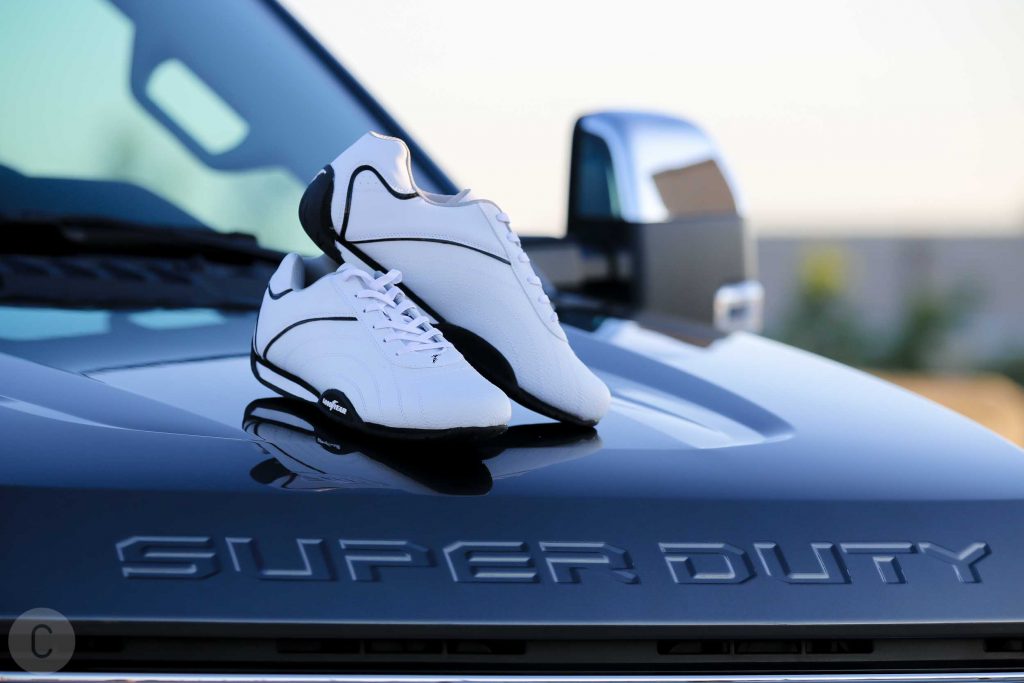 Big Baller Brand this pair of Goodyears is not. The down-to-earth price of $39.99 plus taxes and shipping will get you a whole lot of shoe. We are even convinced that Goodyear has a lot more potential than to be designated the ‘dad shoe’ since it’s not likely to give Adidas, Nike, Puma, Reebok, Under Armour a run for their money.

Dads who love fast cars though wouldn’t be a bad target market for Goodyear to go after with its shoe. While there is no athlete or celebrity endorsement yet – we aren’t holding our breath and we wouldn’t suggest Goodyear does either– Goodyear is not just selling some off-brand, bargain basement kicks here.

The Goodyear Ori has a very appealing aesthetic that’s similar to Coach or Gucci athletic shoes, generally worn by the most discerning and either upscale or upwardly mobile crowd (such as, let’s say, Duane Martin, the actor and star of “Real Husbands of Hollywood,” who loves to banter about how his refined shoe collection creates a separation between him and his sons, who only really care about Jordans).

The Ori is light but durable, featuring light weight synthetic performance upper and a breathable full fabric lining. The EVA/rubber outsole, synthetic and leather upper, Goodyear rubber outsole for grip with drivers rounded heel – these are all features of this shoe. It’s slip and oil resistant, but thankfully, stops just short of being a tire for your feet.

Written By
Angel Mosqueda
More from Angel Mosqueda
I’ve had the good fortune to test drive about a half a...
Read More
0 replies on “The Goodyear Ori shoe is sheer excellence in white and black”