Toyota Tundra seizes but a fragment the full-size truck market, though it does so consistently, owed to a reputation of performing both robust and durable; yet has always stood rank and file to the industry front-runners Silverado, Sierra, Ram and F-150.

Dwarfed in sales and statistics, Tundra has been found wanting in the domains of fuel economy, ride quality, comfort and features when compared to its leading-edge brothers. 2016 Tundra offers little deviation to this precedence.

Since typical pickup buyers find Tundra categorically mediocre, certain additions were introduced back in 2014 to assist in strengthening its upscale niche; most notably the glitzy trim on Platinum and 1704 Edition models. 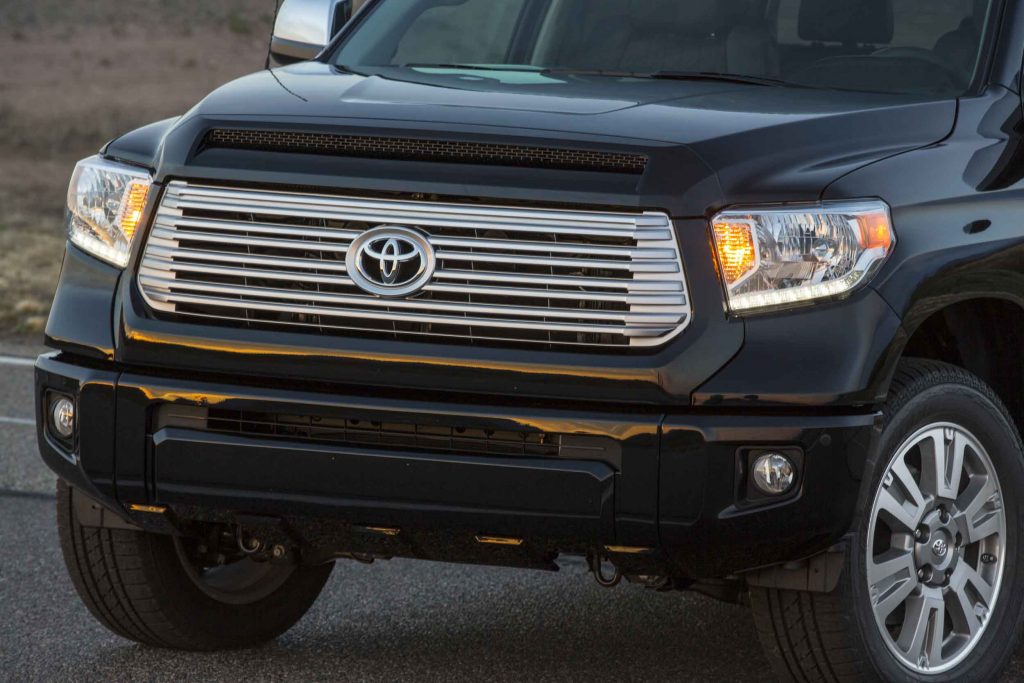 The power tilt/slide moonroof with sliding shade is a nice touch of class, as is having manually controlled LED daylight running lamps. As with other posh trucks doubling as work-horses, the 5.5′ double-walled bed with rail caps offer peace of mind that a few gritty Spartan-esque projects won’t trash the rear half of your stylish beast.

The necessities of a big-boy pickup have been summarily checked off the list, yet Tundra still feels a bit hodge-podge, and not as visually streamlined as the Sierras and F-150’s. Notwithstanding all major truck builders tend to over-toot their own horns, most pickup aficionados will resonate the sentiment that domestic models yet maintain an edge, a distinct personality that Toyota Tundra just hasn’t matured into.

Progress was made two years ago with updates to the grille, hood and front end which cleaned up the rounded ‘bubble’ look. The new tailgate logo was a subtle adjunct, and the interior revamping didn’t go unnoticed. The 20” alloy wheels give Tundra a no-nonsense industrial feel.

These changes, though beneficial individually, collectively evoke a notion Toyota is trying too hard. The efforts aren’t meshing, and although still a beautiful creature, just feels a bit off. 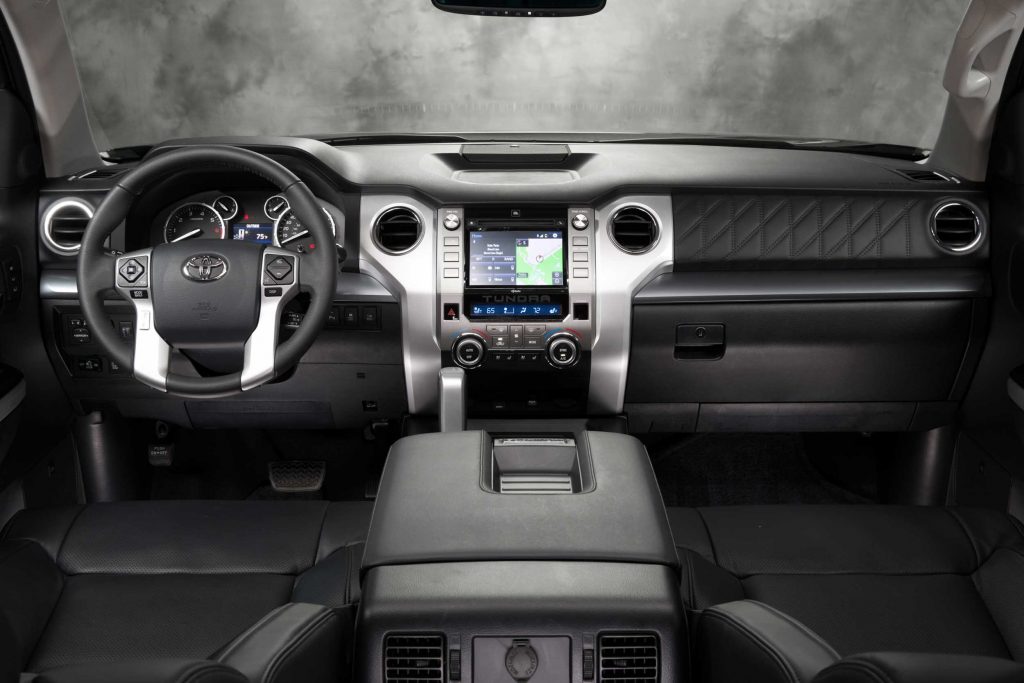 Entune, Tundra’s infotainment system is trouble-free and effortless; connecting Bluetooth is straight-forward and inputs respond with lightning rapidity. The 3.5” dash tech which displays fuel economy, trips and other stats kindles the luxury spirit.

Contrasting the displays, remaining interior tech is inadequate. Two 12-volt auxiliary power plugs and a solo USB port are onerously accessible below the center stack. An additional 12-volt power unit is concealed in the center armrest.

Rear-seat passengers are out of luck: no power plugs and no USB ports. In an age where tech reigns supreme such an omission amounts to a logistical faux pas.

Offering a 38-gallon fuel tank to the 2016 Platinum models only marginally offsets the disappointing EPA fuel economy ratings of 13 mpg city, 17 mpg highway and 15 combined. During a week-long test our truck averaged 14 mpg. Close, but no cigar. Its domestic cousins have given this facet of engineering much more ado. Chevy Silverado’s 6.2-liter V-8 boasts 15/21; Ford F-150’s 5.0-liter V-8 supplies 14/19/16.

Toyota’s decision to veto the V-6 option puts them further down the track. Ford provides the turbo-charged EcoBoost on F-150’s; both Nissan Titan XD and Ram 1500 have economic diesel alternatives.

Our 2016 Toyota Tundra 4×4 Platinum CrewMax asserted its 381 horsepower and 401 pound-feet of torque with a gravelly roar. This 5,858 pound goliath surges zero to 60 in 6.4 seconds and shreds the quarter-mile in 15.1 seconds. We had no problems powering around city traffic, though if you are pining for mud we’d recommend the TRD Pro trim level.

Although we found our Platinum’s vigor perfectly acceptable, it’s notably subordinate to the V-8 Silverado and Sierra, and Hemi-powered Rams. Even Tundra’s 4.6-liter V-8 base engine, with its 310 horses pales to the GM V-6 counterparts, offering similar power figures.

In fact, although Ford’s F-150 twin-turbo V-6 has a degree less horsepower, it is perceptibly bolder at the lower rev spectrum, on account of Tundra’s sweet spot in the power band actualizing halfway up the tach.

Putting engine power to the tires is no chore for Tundra’s 6-speed automatic transmission, eclipsing the Tacoma 6-speed tranny which has delay issues. Our model shifted smoothly and without delay, and held its revs under uphill loads and when accelerating.

Despite fluid shifting, we have to ask: why is Toyota still planting 6-speeds in their trucks? Fuel economy suffers, several miles per gallon in some cases, which is yet another reason competition edges out Tundra. GM and RAM offer an 8-speed box, and Ford has geared up to a 10-speed.

The 2016 Toyota Tundra 4×4 Platinum CrewMax is undoubtedly palatial with endless legroom and reclining seat-backs, but remember it’s a truck, not a Cadillac…and trucks are meant to haul, so that stiff rear suspension will remind you of this fact on all the bumps.

Speaking of work…this animal levels the playing field, hauling up to 2,060 pounds and towing up to 10,500. Sans load, she offers a nonchalant experience…light steering, bit of a bounce but comfortable. We found it quite similar to the F-150 in this regard. 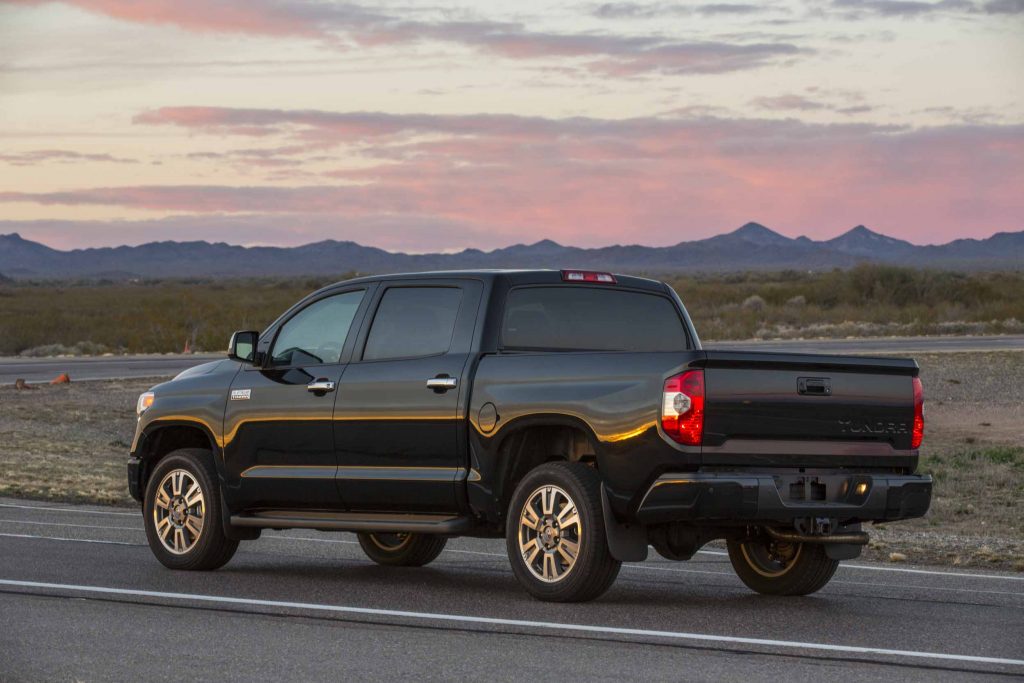 All in all, despite being outshined by competitors the Toyota Tundra offers pickup buyers a stockpile of value. Our 2016 4×4 Platinum CrewMax levied a $50,275 sticker.

What we liked: Sizable passenger room, smooth performing V-8 engine, Platinum trim is legit and on par with Ford and GM’s premium versions.

What we didn’t like: Poor gas mileage, lack of V-6 or diesel options.

And although its powertrain options have been economically out-engineered by domestic competition, a non-comparative grading rubric shows it to perform quite satisfactory for what it is, a solid work truck.

But it’s not enough. Ram 1500 has classic tough nostalgic styling, Silverado shows off its adaptive suspensions, and the F-150 boasts sales statistics to make them all weep. Tundra will need a healthy injection of innovation to secure longevity against these rivals.

Written By
Angel Mosqueda
More from Angel Mosqueda
Nissan has spruced up its pickup for the first time since 2005,...
Read More
0 replies on “2016 Toyota Tundra 4×4 Platinum CrewMax”