Ford radicalized high-performance off-road pickups when it unleashed the F-150 Raptor in 2010. Beastly capability and warrior aesthetics captivated both mud junkies and style-savants alike. Ford’s Special Vehicle Team spawned this animal to appease insatiable enthusiasts…and wound up breeding a monster, a standard-bearer for all pickups looking to trade asphalt for dirt and grit. From the Baja 1000 desert race to every other off-road challenge the Raptor has raged fierce, setting its agenda to dominate; and with the F-150’s new, lighter platform…the bar is raised even higher.

Exterior features abound both in quantity and quality on this new 2017 model. In answer to sweeping complaints about tie-down systems in general, the design team incorporated Boxlink, a versatile, interchangeable system featuring lockable, die-cast zinc tie-down cleats, and more of them, for your convenience in securing gear.

With an 8,000 pound ceiling, the 2017 Ford F-150 Raptor 4×4 SuperCrew is built to tow. Ford’s dynamic hitch assist is a god-send when hooking up trailers solo. Rear camera display with center line projection allow you to perfectly back up to your hitch without a spotter. No more smashing into your trailer or jerking it around to match up that last bit of space.

While towing those jet skis down the highway, Ford’s trailer sway control will alert you when the trailer starts swaying, then automatically self-correct by adjusting brakes and engine power.

Along with standard dual exhaust you will also find front and rear tow hooks (so you can yank wimpy trucks out of the mud) and skid plates to protect engine bits when you’re tearing up the bush.

Cast aluminum running boards make it easy for the kids to climb into this beast, and unless you’re an olympic jumper consider the optional tailgate step as well.

On the style side, the 2017 Ford F-150 Raptor 4×4 SuperCrew has exclusive rights to Ford’s new skin tone: Avalanche White. We also really dig the LED box lighting; framed around the lights, they create the Raptor’s predator eyes. Stylish and functional wheel lip moldings round out its aesthetic, which pair well with the optional 17-inch cast aluminum wheels…of course, while these are nice we would probably opt for the 17-inch forged aluminum bead-lock capable wheels for $1,165…as we suspect any true dirt-head would.

The 2017 F-150 Raptor is the most intimidating and best looking truck on the market. The only thing that could make it even more alluring would be adding the exterior graphics package ($1,075), hood graphics package ($900) and tailgate appliqué ($494) – all these options were not included in our tester, but it’s still a stunner, regardless.

Ford’s MyKey allows customizing certain vehicle settings for up to 3 different drivers – just input the pass code and voila! you’re good to go. And for peace of mind if you’re crazy enough to let your brother-in-law tromp around in your rig, you can control how fast he tears down the road and even how loud he’s able to blast the stereo.

Beauty isn’t only skin deep on the Raptor. The black interior and matching orange accents reek seduction. For a bolder racing look you can opt for the Carbon Fiber Package, featuring unique accents on the shift knob, dash applique, door applique and medium bin door. Radio, climate control and four-wheel drive are all controlled by oversized knobs. Nothing dainty here.

Interior functionality was also given attention, starting with the hefty, ergonomic steering wheel. Not only is the wheel’s midline accent stripe a great steering guide when whipping back and forth through forests and desert ravines, it has that The Dukes of Hazzard nostalgia. The steering wheel-mounted paddle shifters enable you to securely plant both hands while scourging the countryside.

As far as tech goes, 2017 introduces the third generation of SYNC 3, and despite criticisms of its predecessor, we found this edition rather user-friendly. An upgrade from standard SYNC to SYNC 3 is a no-brainer. It delivers next-level connectivity with color touchscreen, capacitive swipe features, integrative navigation functions and support of Siri Eyes Free and Android Play, as well as being WiFi update-able.

The V-6 Raptor yields not only more power and torque, but better fuel economy. EPA rates the new Raptor at 18 mpg highway and 15 mpg city, estimating a combined 16 mpg. Engineering and its 500 pound weight loss makes the 2017 23% (or 3 mpg) more efficient than its V-8 predecessor. Lighter, faster, stronger. 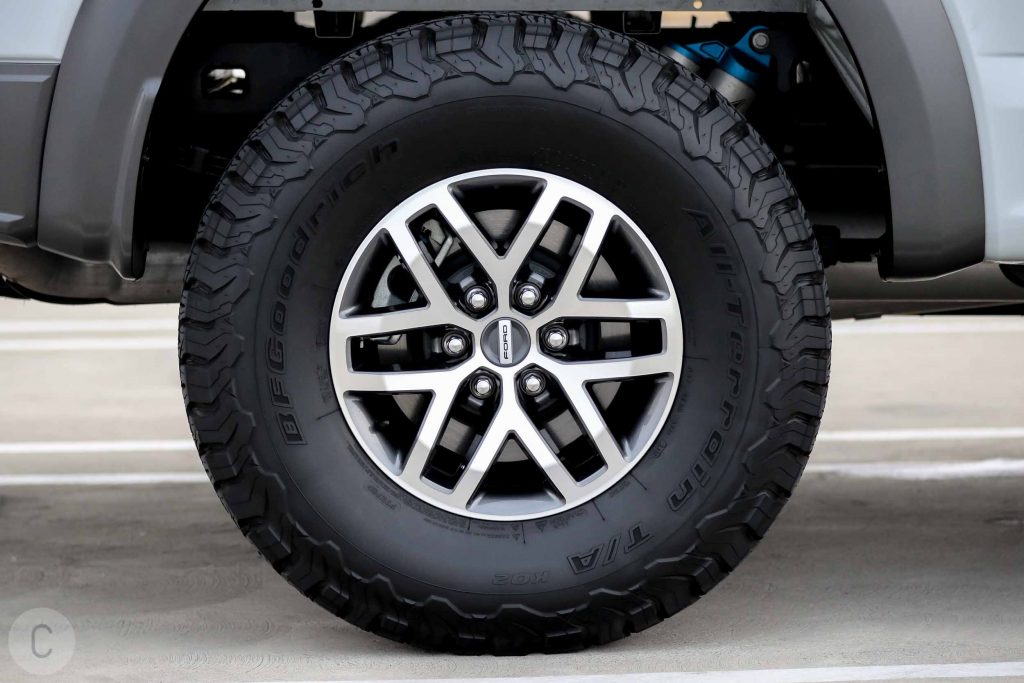 The pickup world, and especially Raptor fans, held their breath when Ford announced in 2017 they were swapping the V-8 for a twin-turbo V-6. Was this design audacity or sheer brilliance? We determined the latter when firing up this brute…that ruthless, grisly roar and banshee-shrieking turbos!

A relentless predator, the Raptor charges with 450 horses at 5000 rpm and 510 lb.-ft. of torque at 3500. It is hands down the quickest pickup to come off the line, racing to 60 mph in 5.1 seconds and shredding the quarter-mile in 13.8 at 100 mph. This 2017 generation boasts a 1.5 second and 8 mph improvement over the old crew cab Raptor with its 411 horsepower, 6.2-liter V-8. We bestow thanks to an aluminum body and that turbocharged demon for delivering the 21% improved torque-to-weight ratio.

The Ford/GM collaboration 10-speed automatic is a masterly engineering feat. Aside from the usual mechanical locking 4-High and 4-Low, it features a clutch-based torque-on-demand system, applying torque automatically where needed.

This all-wheel/4-wheel drive hybrid allows 6 different drive modes to accommodate just about any climate. Normal, sport and snow/weather modes are of course tailored for tarmac. The mud/sand mode (4 High, rear diff locked) ups the grit factor. Move on to rock crawling mode (4 Low, rear diff locked and gear reduction) if you get a wild hair to boulder that yonder quarry. Then there’s everyone’s favorite…Baja mode (4 High, locked transfer case, special transmission programming) for when you’re ready to dig in those claws and ravage the Outback.

As drive mode changes the tranny automatically switches the driven wheels…with safety exceptions of course. If you accidentally hit rock crawling mode on the freeway the box won’t slam you into 4-Low. On the other hand if you spin out in normal mode, it will kick you into 4-wheel drive. We hit pedal to medal on the road, and paddle-shifting was clockwork…tap, tap, tap…keeping in the 4-5k range without missing a beat. By 5th gear we dusted the speed limit…and yet the beast was left wanting.

Masterful as drivetrain engineering may be, an off-road dominator needs a suspension that can keep pace. Fox/Ford Performance didn’t let us down with their 3-inch diameter shocks, nine-stage bypass damping and hydraulic bump stops. This upgrade from the old Raptor facilitates an inch more suspension travel up front and nearly 2 more in back.

Clearance gleaned from front 30-degree approach and rear 22-degree breakover angles will bring peace of mind when tromping over big stuff. Raptor steers like a pickup…so expect a lot of weight on the wheel. Not too surprising that we found a small dead spot in the center, but who expects a blood-thirsty viking to pirouette like a ballerina?

At 5,500 pounds no one expects it to handle like a ‘vette, though everyone marvels at how stable Raptor is, especially for a truck. That hi-tech suspension sports quite a comfortable ride.

A few words regarding Raptor’s brakes. They were never found lacking (a slight spongy-feel perhaps), but didn’t feel as ‘alert’ and fine-tuned as the other systems. The pedal traveled a bit farther than we liked and heavier braking caused an initial nose-dive. Again, viking vs ballerina.

As reigning Beast Master, one might expect inflated prices on this 2017 luminary. You won’t. The smaller SuperCab version starts at an industry comparable $49,520 and the SuperCrew around $52,505. Adding on kits will start to swell the sticker, and depending on how decked out you want your Raptor to be, could end upwards of $60-$70k.

SuperCrew or SuperCab? If the Raptor is your choice for a family-van upgrade…go with the SuperCrew, it’ll pack everyone in. If you’re rollin’ solo or tromp-stompin’ with a buddy, go with the SuperCab. It’ll perform slightly better with a shorter wheelbase, and does have the backwards-opening half-doors.

Like it’s prehistoric namesake, the Raptor is a visually formidable badass. It has extraordinary amounts of power in all the right places, all while accommodating and adapting to virtually any terrain with necessary toughness and grace. Despite being a demi-god among trucks, the achilles heel of the Raptor seems to be it’s brake system…some adjustments to pedal play and easing the ‘spongy’ feel would be ideal.

As standard-bearer, the Raptor stands alone. It is Mike Tyson in a schoolyard; to whom will it be compared? Tacoma TRD? Ram? ZR2 Colorado? All are left wanting in contrast to Raptor’s fervent power and performance. Ram and Nissan came closer with concept cars, but without production there is no competition. Raptor is an undeniably superior predator, standing alone in and deserving a class of its very own.