The Toyota Tacoma TRD Pro was designed for adrenaline junkies….join the fun!

The Toyota Tacoma has been synonymous with off-roading capabilities, and is already a favorite in many states, such as Hawaii. With adventure readiness and some serious brawn, Toyota’s new Tacoma TRD Pro is the only invitation adventurers need to drive off the paved roads and into the wild. The beefy pickup truck comes in two variants, a manual transmission model, and a 6-speed automatic version.

2017 Toyota Tacoma TRD Pro is the highest trim level in the lineup of the Tacomas. It has some ruggedly handsome looks, and the off-road gear available makes up for its tight interior and the poor fuel economy. The car comes with a 3.5-liter V-6 engine that produces 265 lb.-ft. of torque with a 6-speed automatic transmission.

The 2017 Toyota Tacoma TRD Pro speaks power, and speaks so in the language of legacy. The blacked out hood scoop, inimitable badging, and black overfenders give it a look that’s hard to ignore. The iconic Heritage-inspired “TOYOTA” grille sits pretty on the front, and is accentuated with the black bezel enclosed monster headlamp. Driving your TRD Pro is all the more fulfilling, with the heritage branding driving home the point that Toyota is the king of off-road driving.

The earthy cement shade that the Tacoma TRD Pro comes in lends sophistication to its muscle. There’s a quarter-inch front skid plate made of aluminum which protects the suspension and the important engine parts too. The TRD front skid plate is made from ¼-in.-thick aluminum, and acts as an armor of sorts to keep the mechanical components of the truck protected from the wild terrain you take it to. Plus, the TRD exhaust gets the ‘roar’ right, announcing your arrival in style. The Dual walled chrome plated tip with TRD logo adds class and aplomb.

The result of all the improvements made to this truck is that you get one really purposeful looking truck, although one thing we really do miss is the Goodyear Wrangler All-Terrain tires from the off-road version.

One of the biggest demerits of this truck though has got to be the awkward, small tow hooks under the extreme overbite of the front bumper. It makes attaching anything frustratingly difficult but how often do you have to attach something to the front part of a truck? It is a slight flaw though. 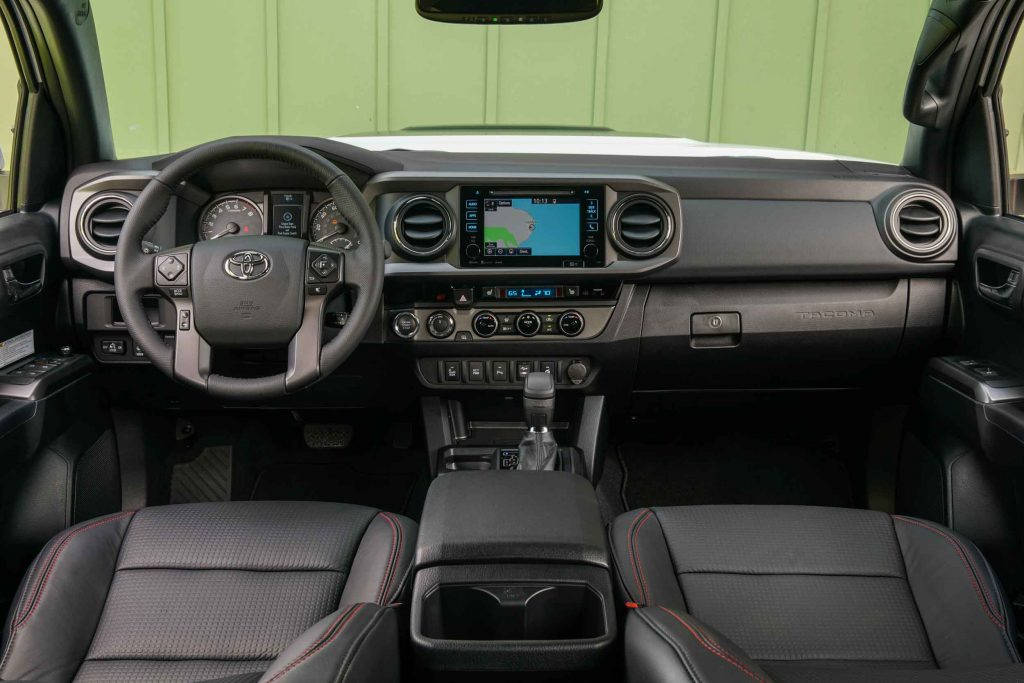 The Tacoma TRD Pro works on a black interior theme that amps up the class of the pickup truck from the inside. Heated seats, leather upholstery, navigation, automatic climate control, blind-spot monitoring, a wireless charging pad by Qi, backup camera, and the proximity key all come on the TRD Pro, basically standard.

The Entune Premium Audio system is your one stop access panel for apps, traffic info, phone functions, and weather updates. Stream your music wirelessly to the JBL amplifier and superb speakers. Integrated navigation has you covered on all those tricky adventures you head on without a map. Forget smartphone charging cables, Tacoma TRD Pro comes with Qi compatible wireless smartphone charging. The truck is high on TRD legacy, with TRO Pro floor mats and shift knob.

TRD Pro’s EPA fuel economy is 18 mpg in city, 23 on highway, and 20 combined. We drove the TRD Pro for a week, and observed 19 mpg combined fuel economy. Note that for the 6-speed automatic variant, running the truck in ECT (Electronically Controlled Transfer Case) Power mode comes with a caveat. 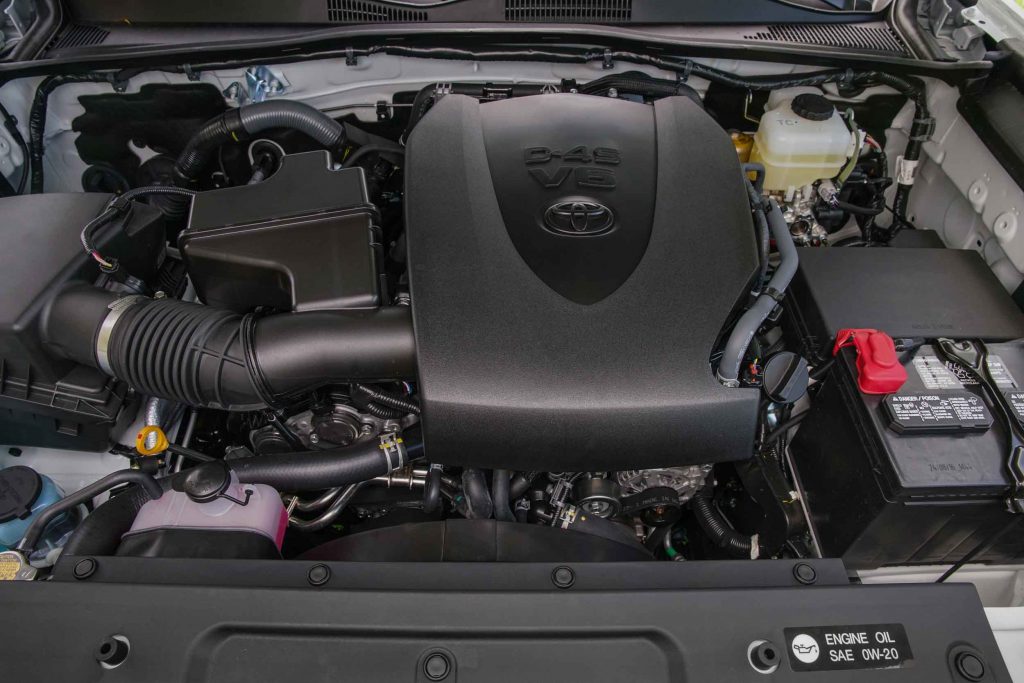 The dashboard has a button called ECT Power which changes the shift programming, and mitigates early upshifts while hastening the downshifts between the high gears. This perks up the responsiveness of the gearbox. The auto transmission also has some dimwitted programming and quite tall 5th and 6th gears. On the highway, the transmission will downshift dramatically from overdrive ratio to 4th gear even when there’s a whiff of uphill grade or any request for acceleration at all.

When equipped properly, the truck can tow anything between 6,400 pounds and 6,800 pounds. TRD Pro’s payload doesn’t change; it can manage transportation of payloads of up to 1,440 pounds.

The performance of this truck is at par with all the other Tacomas in this category with a 0-60 mph run in 7.7 seconds, and a 70 mph stop in just 180 feet. This is pretty decent considering this is a mid-size pickup with some all-terrain tires.

The brake pedal still comes with the stepped resistance from all other Tacomas though. The shocks feel a little firmer as compared to the Bilstein shocks, and are designed for off-road use. They are able to diminish the body movements of the model without hampering the ride quality one bit.

What doesn’t help is the fact that the 3.5-liter engine creates most power in the higher rev ranges, and the sport exhaust doubles as a bugler announcing the frenetic behavior of the transmission on the highway. The noise-level readings on the interior of the car match all other Tacomas but the droning of the exhaust is slightly more annoying.

Overall, the balance delivered by Tacoma TRD Pro is laudable; we didn’t observe much body roll or understeer while making sharp cuts at speed. Despite the additional lean of this pickup truck, on-road drive doesn’t suffer, and front to back capitulation is also well controlled. Thicker stabilizer bars also do their bit to help the pickup truck make corner turns without body roll.

TRD Pro’s suspension can help enhance the rear-axle articulation so as to better absorb larger bumps at both low and high speeds. The shocks have remote reservoirs on the rear axle for more cooling and fluid capacity. It even soaks the landings up from any mild jumps with ease.

What we liked: TRD Pro’s power and masculinity make it a real winner because of the legacy TRD styling. Plus, the mpg is an improvement and the ride comfort gets our thumbs up.

What we didn’t like: This truck can get expensive quick with the options that are on the menu and the seating position seems a little off.

Whether you’re planning to play with the truck in the sand, go across an open desert, go up and down hills or some mountains, the Pro certainly stands out from most of the other off-road-focused trucks at other dealerships. The TRD components do not get in the way of the day-to-day livability of the truck either. You may not see this Tacoma in a Fast and Furious movie but it can be in another type of movie where speed is not the main concern.

Ultimately, 2017 Toyota Tacoma TRD Pro has to justify the pricing in comparison to competitors such as Chevy Colorado ZR2 and Honda Ridgeline 2017. Chevy Colorado ZR2’s (only available in 8-speed automatic) 308-hp 3.6-liter V-6 engine generates more power than TRD Pro, though the latter’s hauling capabilities have fared better in comparisons.

The Honda Ridgeline’s AWD (all-wheel drive) is better suited for driving on ice and snow, and it comes with special settings for driving in sand and mud. The hardest fact to swallow though is that the truck costs $42,760. When you add the extra options, it comes to $45,052. This means that this truck is going to have to touch a nerve with a very specific group of buyers.

Written By
Angel Mosqueda
More from Angel Mosqueda
I’ve had the good fortune to test drive about a half a...
Read More
0 replies on “2017 Toyota Tacoma TRD Pro”