With full-sized pickup trucks adopting luxury trappings a lot more than before, compact trucks like the 2016 Toyota Tacoma TRD Off-Road Double Cab continue to be utilitarian workhorses. This vehicle is as tough as nails, making it superb for off-road adventures.

The 2016 Toyota Tacoma TRD Off-Road Double Cab is quite the looker with its bright Inferno Orange paint. The exterior has a couple of features that you will make you smile, including a 5’ composite bed that comes with a 120-volt power outlet. It also has a deck rail system with 4 adjustable tie-down cleats. You will likely be impressed with the lower, removable, and lockable tailgate that makes it easy to store your equipment.

This compact pickup has some stellar interior features as well. Although it is not the most advanced technology, you will be satisfied with the 7-inch high-resolution touch screen that boasts AM/FM/CD, USB/AUX, Bluetooth, HD radio, as well as SXM with a 3-month free trial. The interior also features a Qi-compatible wireless charger for your smartphone – note that it does not work on iPhones which is not a big deal for those people who do not buy Apple products because of the controversy surrounding this company. 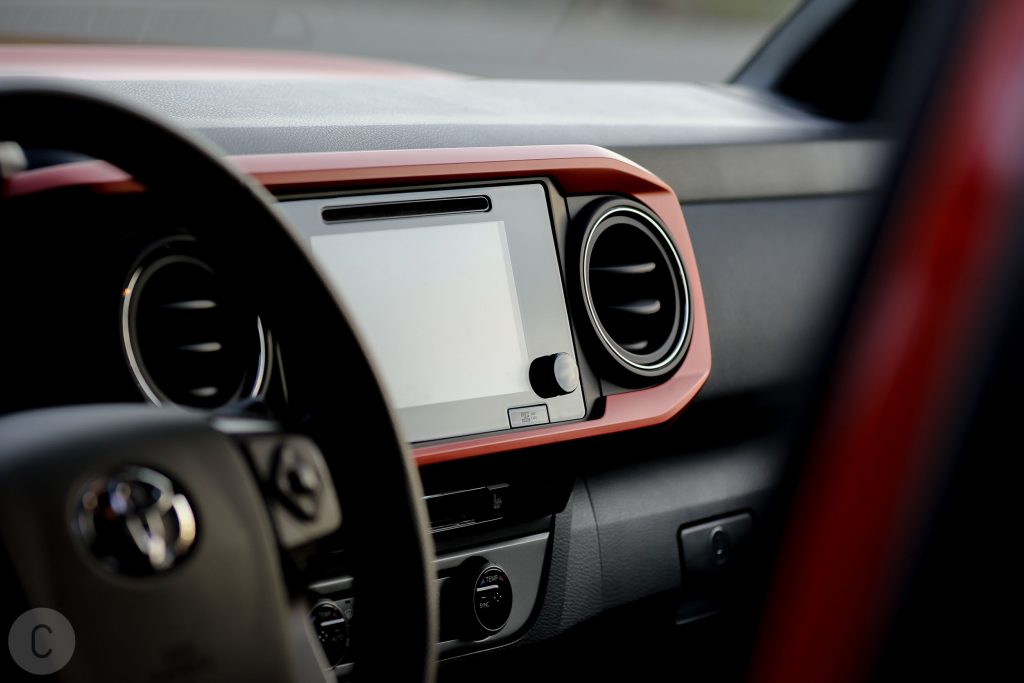 The 2016 Tacoma TRD is a tough looking truck and it performs the way it looks. It may not be in a Bad Boys movie smashing through things and catching bad guys but it possibly could be in a prolific action scene lighting up the silver screen. 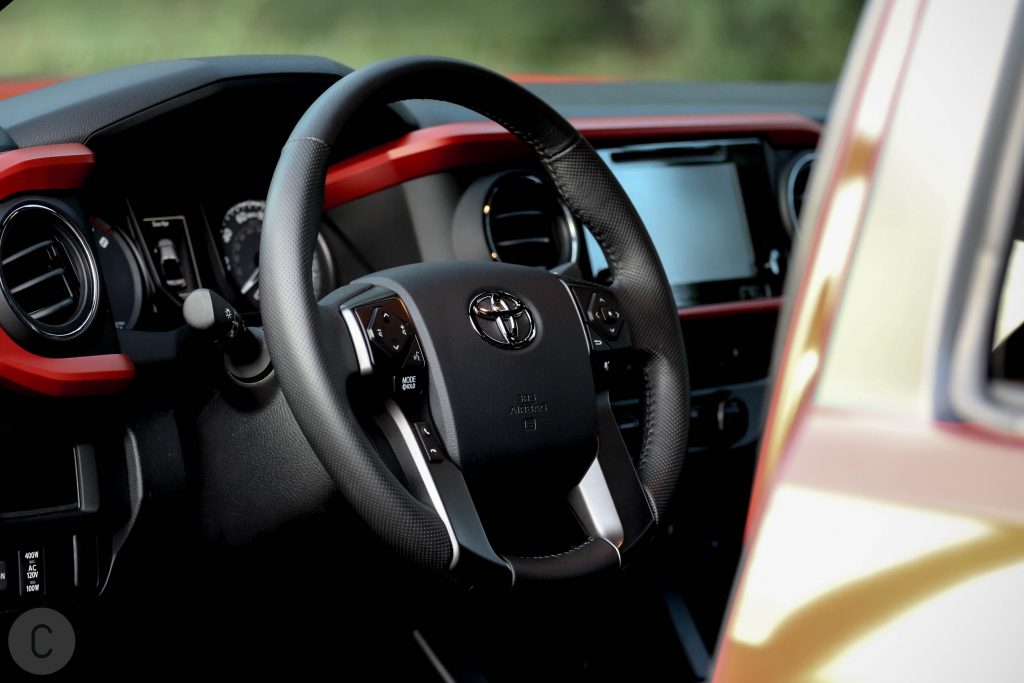 The 2016 Tacoma TRD gets 18 city, 23 highway, and 20 combined. These are pretty impressive numbers. After a week of test driving, including helping a relative move, the average was around the high 17 mpg. This is pretty good for a truck and a much better improvement over its predecessor. 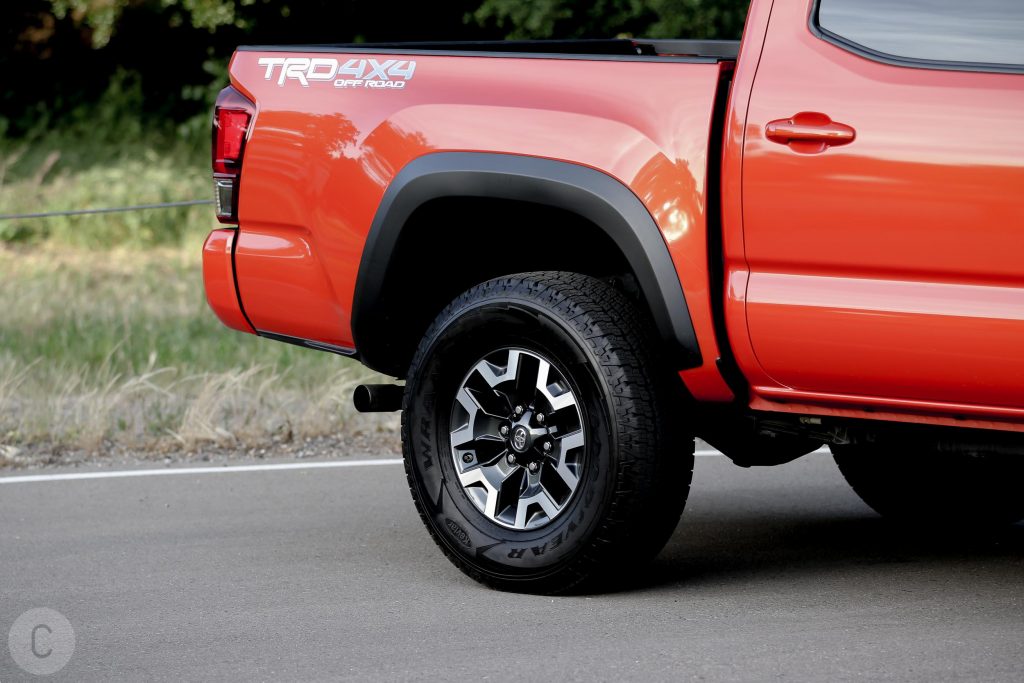 With its 3.5-liter, V-6 Atkinson cycle with Dual VVT-i, 279 hp and 265 lb.-ft. of torque and a 6-speed automatic transmission, the 2016 Toyota Tacoma TRD Off-Road Double Cab gives you quite an impressive performance. It stands out in the handling area compared to other crossovers its size. The TRD Off-Road has springs that are significantly softer than you would expect in a truck. It is one of the best handling trucks on the market today.

The Tacoma TRD Off-Road performs well for its owners and its off road capabilities are respectable on a variety of levels.

With its revamped automatic transmission, which give the truck a gear each and a tuned rear suspension, you will find that the Tacoma has been made more fuel efficient, quicker, and slightly more settled and confident than its predecessors and some of its peers.

When it comes to off-road ability, the Tacoma TRD’s performance has already been mentioned. It handles well in off-road situations so you can enjoy those gorgeous mountain views and drive across the open terrain with acumen. The stability and traction systems are subtle, which is necessary for a variety of traction requirements. All in all, you should be satisfied with this truck’s performance just like America and the world is satisfied with Transformer movies.

You also get the V6 Tow Package that comes at $650. This package includes a Class IV towing receiver hitch, ATF cooler, power steering cooler, engine oil cooler, trailer-sway control and a 130-amp alternator, 4 & 7-pin connector with converter. If you need a tough truck that is going to work hard for you, these are features that will play a vital role for you.

What we liked: Good looks, comes with an appropriate set of off-road tools, and lives up to its reputation for being a decent, tough truck.

What we didn’t like: A little too expensive compared to its competitors and the transmission can be slightly lethargic.

When it comes to mid-sized trucks, the 2016 Toyota Tacoma TRD Off-Road Double Cab is one of the top ones. However, with a few new models coming up, it does have some competition. The Chevrolet Colorado is affordable, but its resale value is much less when compared to the Tacoma. The GMC Canyon is another worthy rival, but it is nowhere as refined as the Tacoma.

The Nissan Frontier is another competitor, but the Tacoma beats it with its advanced cabin amenities such as infotainment and connectivity. Also, the Tacoma’s powertrain and ride are much smoother. The 2017 Honda Ridgeline will be another rival, but it is doubtful that it will beat the 2016 Toyota Tacoma’s serious hauling and off-road ability.

If you are looking for a mid-sized truck that is reliable, superb resale value, and maintains its solid reputation for off-road capability, you should consider the 2016 Toyota Tacoma TRD Off-Road Double Cab.