Are you looking for a big family vehicle? There are a lot of large, three-row crossover vehicles that are ideal for carrying the kids and all of your other stuff, but at the same time, gives a better driving experience than those gigantic truck-based monsters of old. But what if you want that old-school driving experience? Well, you can get it with the 2016 Yukon XL Denali.

This big SUV retains the enviable combination of that robust body-on-frame construction and the power of the V-8. As a result, its towing capability supersedes crossovers while ensuring a heightened degree of stability and solidity.

It also has seating for nine, but still has ample cargo space behind its third row. A magnificent bonus is that Yukon XL Denali’s third row seat is a lot more comfortable for adults and big kids compared to the smaller Yukon. Now anyone in the car can travel in comfort while watching The Wire, Transformers, The Shield, or whatever. 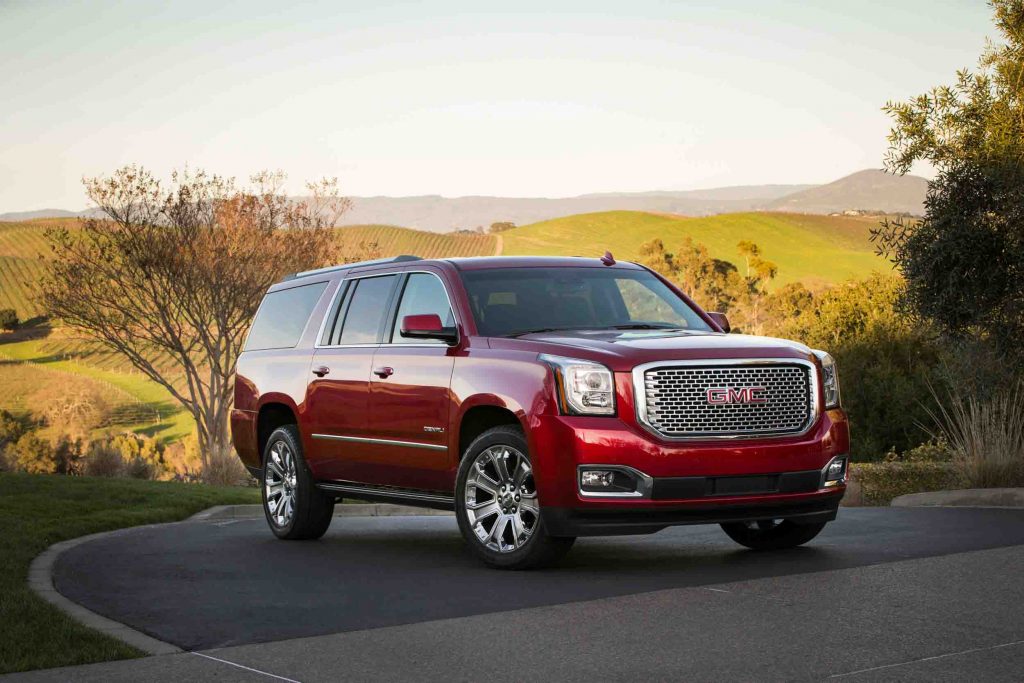 With a beautiful Crimson Red Tincoat paint, the Yukon XL’s exterior is nicely designed. With its distinctive Denali-specific grille with chrome accents, rain-sensing wipers and HD projector headlamps, this SUV grabs attention on the road. It has passive entry system along with remote keyless entry which gives you access to all four doors with key fob sensor and allows you to start the vehicle with just the push of a button.

If you want to add to your car’s presence, get the 22-inch aluminum wheels with chrome inserts, available at $2, 495, instead of going with the standard 20-inch ones. It hurts the pocketbook a little. But is worth it for some people, not everyone, as it accentuates the XL Denali’s aggressive and dominant look.

Another poignant feature is the SUV’s power retractable running boards which come at a price of $1,745. Again, this is a pricey add-on, but a fantastic option if you have kids in your family, and just want to make it easier for people to exit and enter the vehicle.

The Yukon XL’s power programmable hands-free rear liftgate is another superlative feature with which you can adjust the gate height with the touch of a button and kick open with your foot. Whether you are inside or outside the SUV, you can easily access the gate with the key fob. You can also open the rear liftglass separately so you do not have to raise the full liftgate to load cargo.

The interior is beautifully done in a cocoa/shale tone. The features inside include Bose Centerpoint Surround Sound system, HD radio, heated steering wheels, and steering wheel controls. In addition, you will be able to utilize tri-zone automatic HVAC, power tilt and telescopic steering column, cooled and headed front seats with perforated leather, power-adjustable pedals, memory settings for the outside mirrors, driver seat, pedals and steering wheel.

How come your house cannot be this luxurious?! Well, perhaps it is!

The XL also comes with a 110-volt power outlet so you can charge your devices. On top of this, it has a customizable driver display, XM Nav traffic, active noise cancellation and wireless charging to charge non-Apple devices without needing a cable. All these features ensure that you have everything you need when you are behind the wheel.

The XL Denali is also available with a Heads-up Display which is priced at $425. This windshield display projects important data at your eye level while driving. This is better than Star Wars but that is not saying much since the 2015 Star Wars movie was horrendous. OK then, this is as impressive as something out of Star Trek!

Some of the features include 4 different driver views that you can choose from, audio data including media and radio info as well as incoming and outgoing calls, turn-by-turn compass and navigations displays so you stay on course at all times and available vehicle performance data like gear shift indicator, transmission position, tachometer, and speedometer.

The Open Road Package, priced at $2,860, includes rear seat entertainment system that has dual DVD monitors with wireless headphones – one screen in the second and third row.

The MPG numbers that the Yukon XL gives you are 14 city, 20 highway, and 16 combined. While these are not the best numbers, those who are buying this monster of an SUV are not too concerned with such numbers. It is the 4WD capabilities that concern them more. And anyways, with oil shale development that has been a Godsend to America and humanity, gas prices are not as expensive before this incredible innovation became viable. 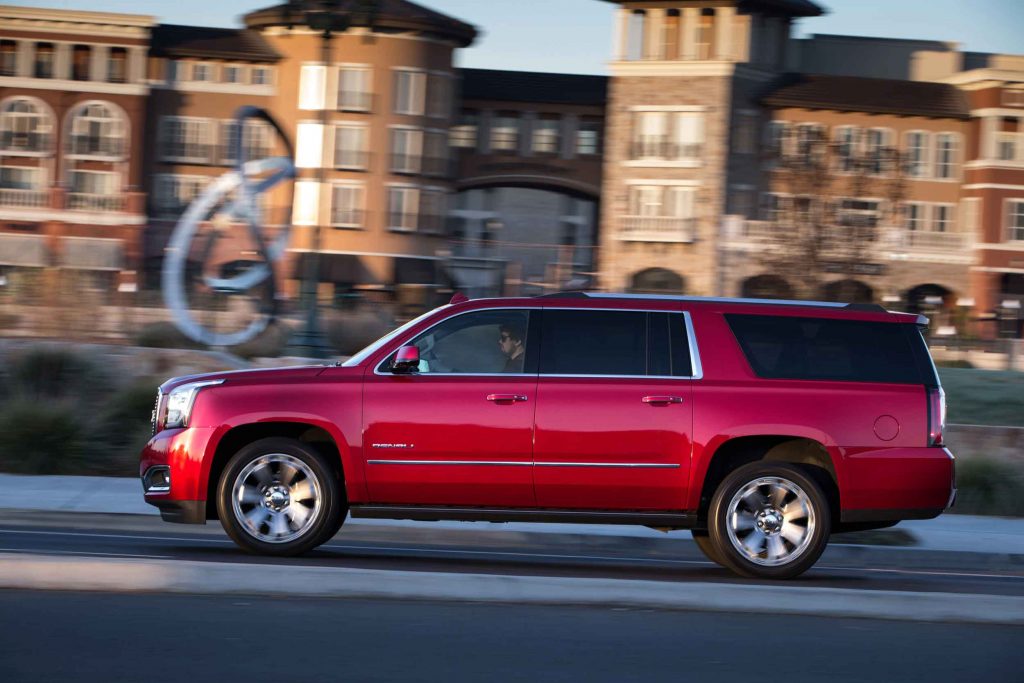 The Yukon XL is a fun drive and performs well, with its 8-speed automatic transmission, 420 hp, and 460 lb.-ft. of torque. These numbers can get you from 0 to 60 in about 5.5 seconds – that is incredibly quick for a car of this girth.

The 2016 GMC Yukon XL Denali provides a steady drive, even if it is not the most luxurious. You can expect nimble performance even though it is a big beast of a vehicle. You will probably choose this SUV as your family ride because of its 2WD or 4WD option on the 8-speed automatic transmission, which includes paddle shifters. These are the things that make this vehicle perform so well despite its bulky body. 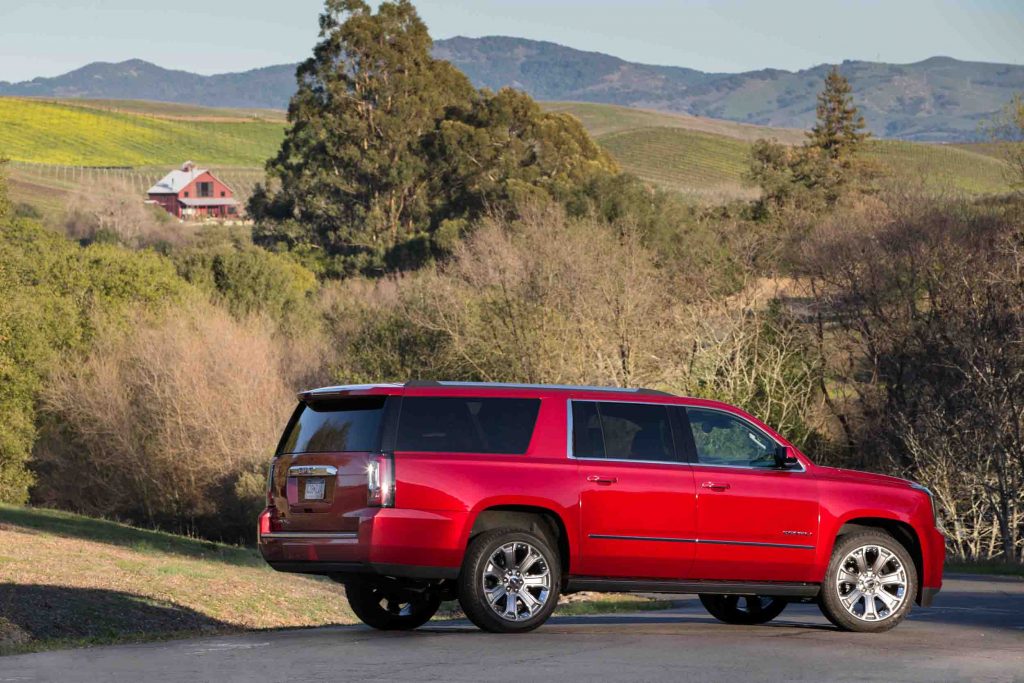 What we liked: Top-quality interior, powerful V-8 engine, Magnetic Ride Control, which you will find in Denali trim.

What we didn’t like: Can be pretty expensive when options are added and the gas pedal responsiveness is disappointing.

Full-size SUVs are still out there and giving their smaller counterparts a run for their money, with models like the 2016 Yukon XL Denali. The Ford Expedition and Lincoln Navigator are both worthy rivals with incredible power from their turbocharged V-6 engine, but the Yukon XL’s V-8 crushes them both.

The Toyota Sequoia is another fierce competitor with its Powertrain smoothness. But the Yukon XL has better features and performance which makes it the better choice for those who are looking for a complete family vehicle.