Let’s clear one thing up – nothing compares to an Audi R8. I was fortunate enough earlier this year to spend a week driving around in this European super car. It was, for lack of a better word, awesome. I bring this up not to brag (okay I’m bragging a little), but to offer an alternative – sort of.

My tester this week is the 2016 Audi TTS Coupe. It shares some of the similarities to the R8 (emphasis on some). It has sporty looks, sports-car handling and amazing German engineering. However, the similarities end there, as the TTS is so much more affordable and really is a much different car than even any other Audi on the road.

The TTS is a roadster, sort of. It’s available as both a convertible and as a coupe. It’s an enthusiast-oriented coupe. Small, squatty and holding to the road, it’s an absolute joy to drive. You won’t feel like Robert Downey Jr. in Iron Man (he drives an R8), but you’ll feel gleeful. For 2016, the TTS is completely redesigned. 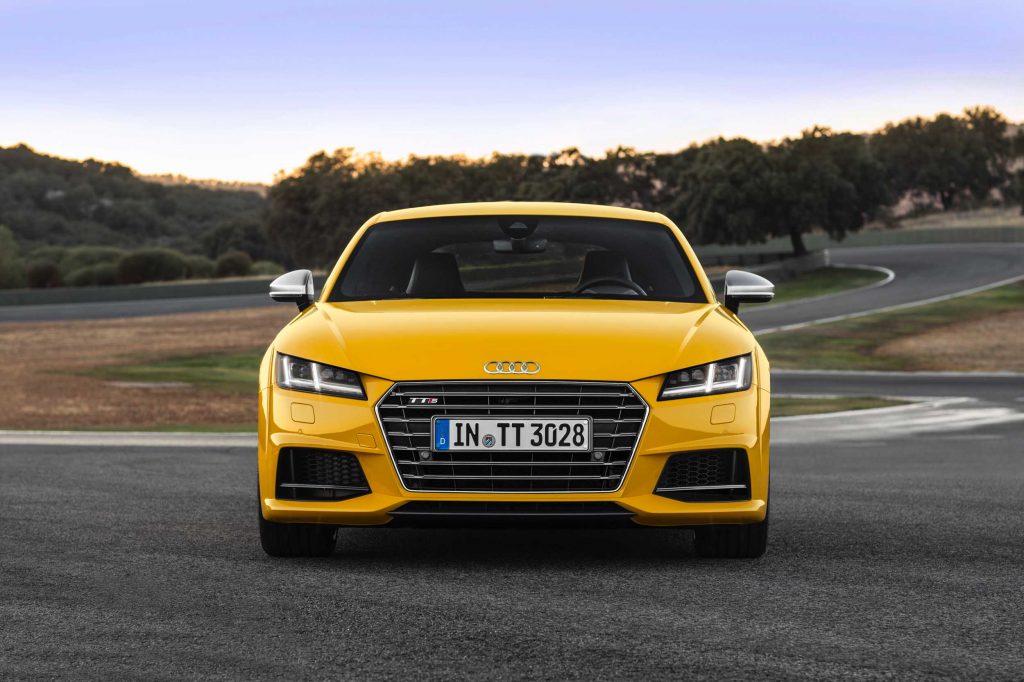 On looks alone, the TTS is an eye grabber. The sculpted exterior is most definitely distinctive. It’s not an R8, but it’s also more special-looking than most cars on the road. The overall appearance is also gender neutral as it’s not too cutesy like other roadsters and is masculine and aggressive with its styling. The grille is sexy with the LED headlights flanking each side. At night, these lights are distinctive and even during the day really add to the appeal of the design. The back is a little more subdued and less aggressive looking. It more resembles the sloping A7 with an angular C-pillar and pointed back end. 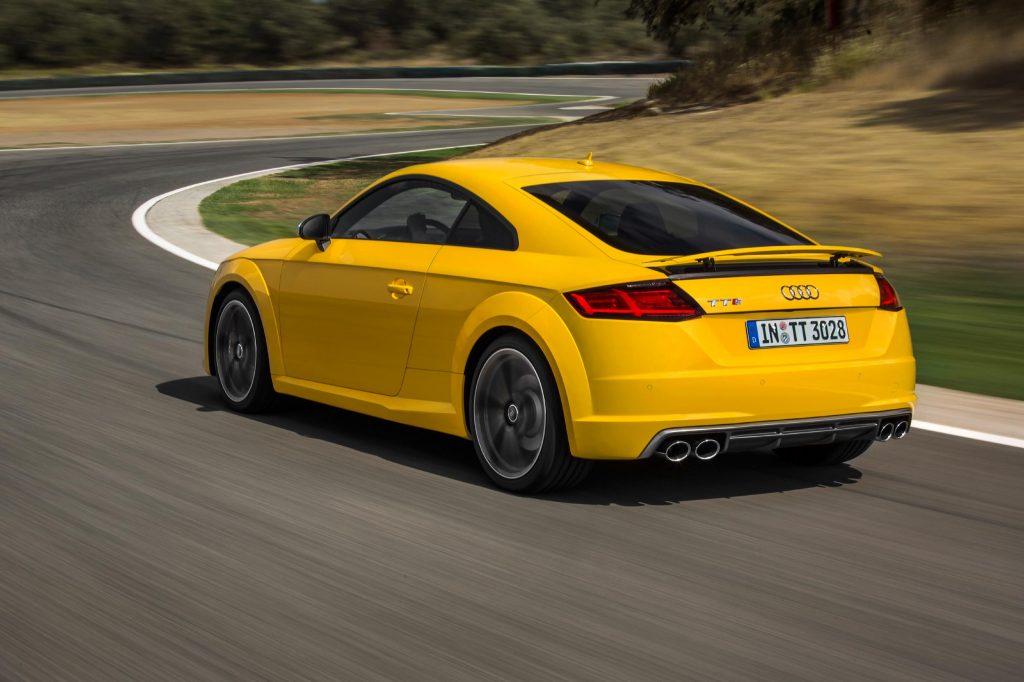 If you’ve read enough of my reviews, you know my love of 4-cylinder turbocharged engines. The TTS has a solid 2.0-liter four banger with 220 turbocharged horses. A 6-speed automatic transmission as is all Audi’s Quattro all-wheel drive. The transmission was a little disappointing in the way it held back shifts or over shifted in certain gears. The TTS isn’t a raw, powerful beast like the R8, but off the line it’s spry and throughout all speeds its agile.

The steering could be more responsive and sportier, as it was a little light through turns. The squatty, low profile helps to feel the road. It drives like a sports car in that you’ll feel every bump in the road. 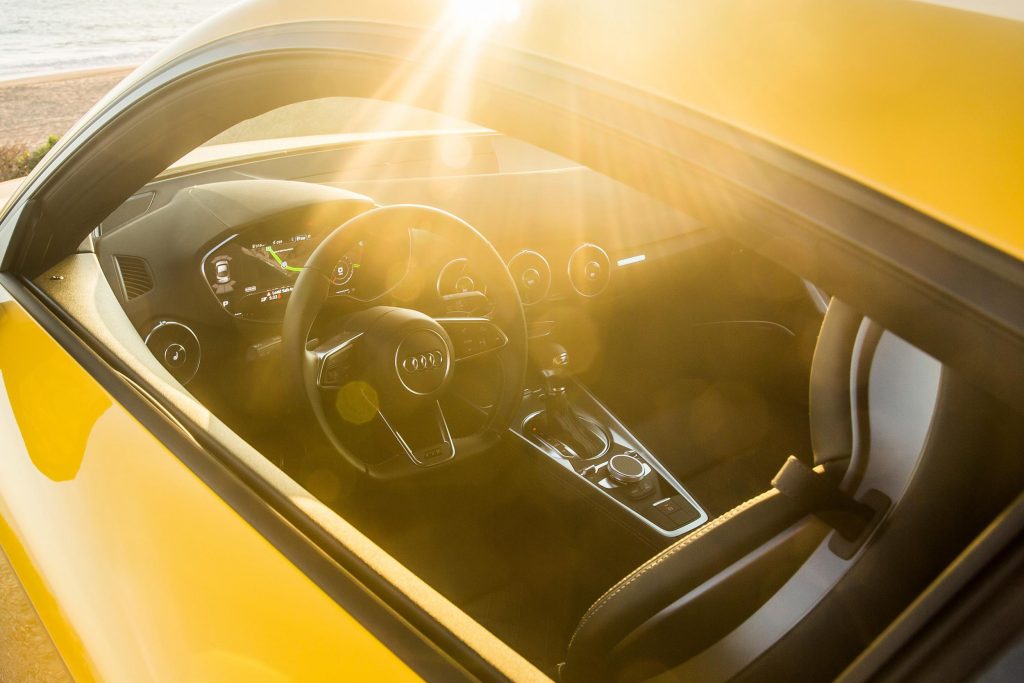 Despite a cramped cabin, the Audi TTS is remarkably comfortable. Racing-style seats are form fitting, but actually enjoyable. Alcantara leather seats have lumbar support and 12-different seat positions. There’s technically a back seat, but it’s more suited for briefcases or purses than passengers. Even the roofline had soft materials on it, which helped minimize road noise, which was a pleasant surprise for such a small car.

All of the touchpoints are high quality and luxury abounds throughout the TTS, including ambient lighting and the circular air vents, which have a modern feel.

Audi is known for cutting-edge technology and the TTS doesn’t disappoint. The cockpit is similar to that of the R8, which uses a “virtual cockpit” design beaming information onto a 12.3-inch display on the cluster above the steering wheel. This helps keep eyes where they need to be and makes accessing needed information easy with the flick of a switch. Plus, it’s super cool and hip.

The overall infotainment system is somewhat over engineered and complicated, but once you get the knack of it, you’re blown away at everything it can do. A Bang & Olufsen sound system thumps the sound and adds to the driving pleasure. 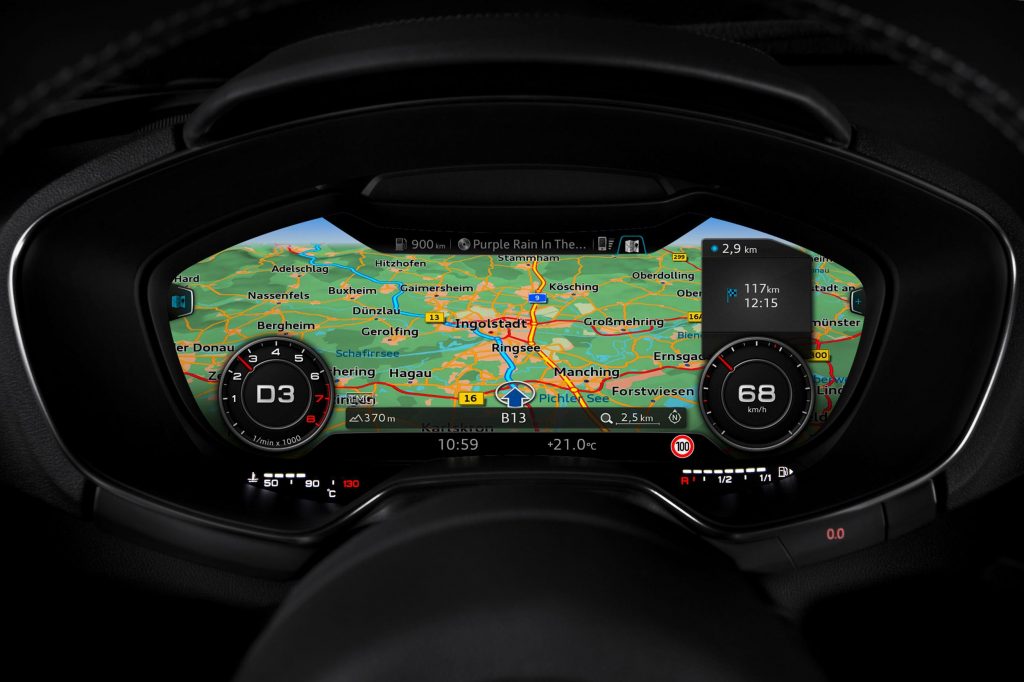 The TTS Coupe has an EPA rating of 23 mpg/city and 27 mpg/highway. In a week’s worth of driving, I averaged 25 mpg.

Audi nails it again with the redesigned TTS. It has the heart and spirit of the R8 and the practicality of the A4. It’s a driver-focused car that’s high on technology.