A smooth looking and driving car with enviable efficiency

The 2016 Volt’s clean sheet design bears testimony to the fact that General Motors gets serious when it comes to retaining its stake in the market’s efficiency corner despite the temporary cheap price of fuel. Created in 2010 as an “extended-range electric vehicle,” the Volt paved the way for what are known as plug-in hybrids.

There are about a dozen plug-ins currently on the market right now, ranging from the Toyota Prius Prime, whose estimated base price is $30,000 to the BMW i8 at $141,695. You better make Peyton Manning-type money to afford a car with a sticker price like that attached to it!

The Volt is akin to the Prius designed as a sleek four-door hatchback that comes with a 1.5-liter 4-cylinder engine and two AC motor/generators for propulsion. The design’s clever part is what is known by GM as a Voltec unit, which is where you will find the two planetary gear sets, the motor/generators, a DC-to-AC power inverter, three clutches and a final-drive differential, all packed in a compact aluminum case. There is an 18.4-kWh battery pack in a T-shaped box running down the Volt’s spine as well as under its backseat.

The Volt this year is presented with two trim levels – the base LT and the high-end premier – which you may have known in the past as LTZ. Now in the second year of its new generation, changes made to the car are limited to one new choice of color and availability of adaptive cruise control. 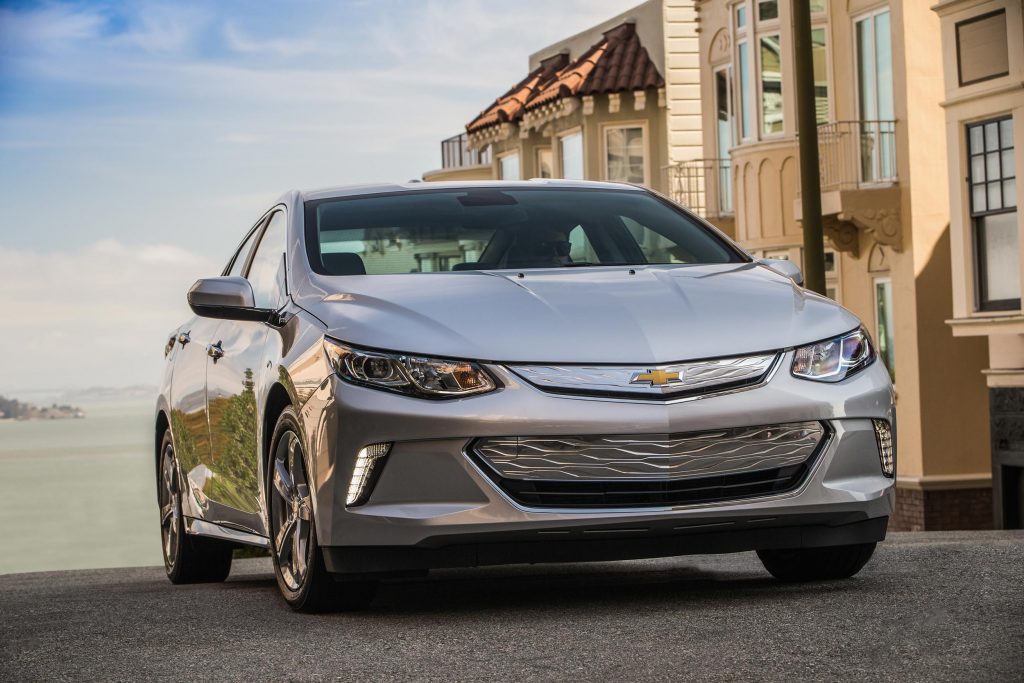 The 2017 Chevrolet Volt Premier’s exterior design is sharp and rakish, with the windshield and rear window steeply-angled and a wedge profile that leans forward and is led by the nose’s pronounced center point. We really like the 2017 Chevrolet Volt’s new exterior design, which we think is a clear improvement over the last generation. When it comes to color, our tester came in the iridescent pearl tricoat which will cost you an extra $995.

When you take a look at the front, you will find the fenders and lights sweeping back from its pointed nose. Now in regards to the wheels, the 17-inch split 5-spoke aluminum wheels give it that elusive sleek look. There is nothing wrong with a little style! 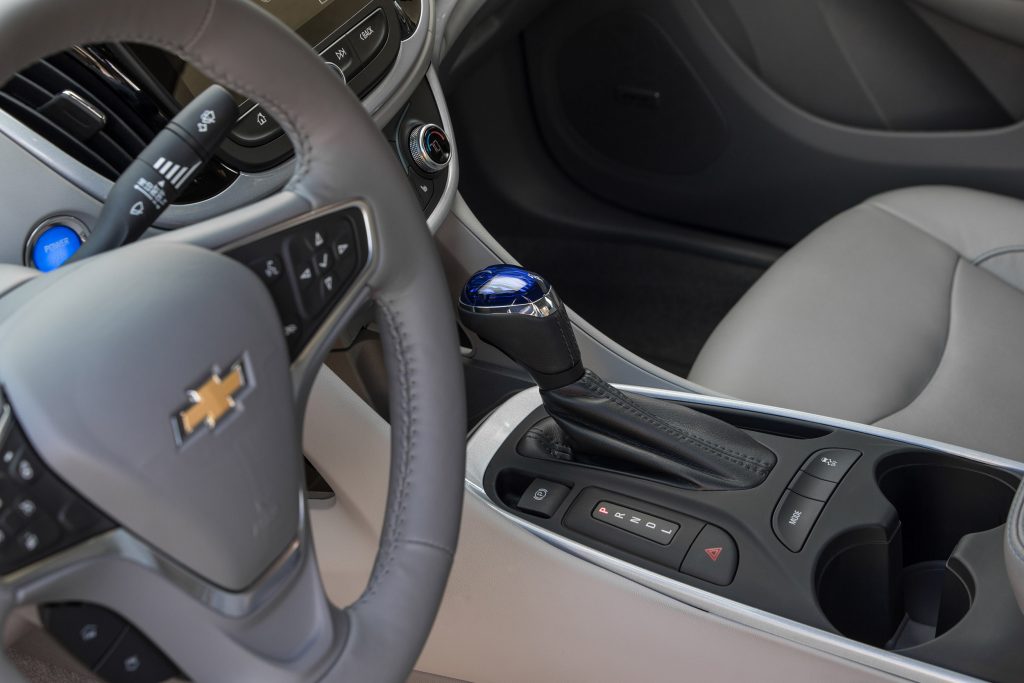 While the new Volt has an aggressive, sporty exterior, its interior is refined and intuitive. We found that it is a little more conventional than the models that came earlier and we think that it adds to the vehicle’s merit. It has an automatic air conditioning that keeps you cool as you cruise on the road.

The 2017 Volt also comes with a beautifully-made, heated, leather-wrapped steering wheel with radio controls to give you the coveted driving comfort. Other features such as the auto dimming inside rearview mirror, steering column with telescoping and tilt, visors with illuminated vanity mirrors and ambient lighting on the doors are all attributes that add to the comfort and luxury of this vehicle.

Now let us talk about the seats – we think they are simply awesome. The 2017 Chevy Volt can easily carry four people with front seats that are well bolstered and we found that they remained comfortable even after a whole day of driving. The front and rear seats come in premium leather and are heated to guarantee comfort, regardless of the outside temperature. Mother Nature may be bitter about this but oh well.

The window lines drop a little towards the front, which allows for more light and does not make you feel like you are sitting on a bucket when you are in the front. Towards the rear, the window lines angle up, which makes the rear seats feel a little tight, even though there is adequate head and leg room. 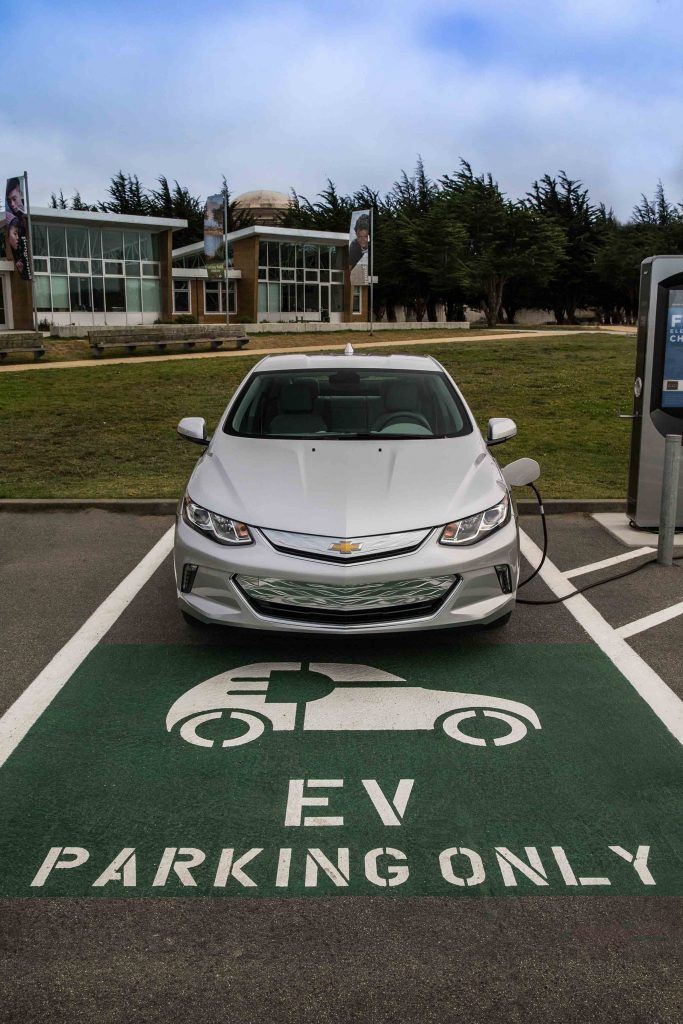 The EPA-rated range of 53 electric miles of the 2017 Chevrolet Volt exceeds every other plug-in hybrid that you will find on the market – the only exception is the range-extended BMW i3 Rex but that price is probably ridiculous nor practical for most people living in this struggling economy.

The Volt and the BMW cannot be compared though, because the Volt comes with a small gasoline tank and gives you only 75 miles more in addition to its 73-mile electric range. The small 2-cylinder sometimes cannot deliver that much power when you need it to. You will not see this car in a Transformers or Fast and Furious movie! No one is buys the Volt to rip down the highway.

When it comes to fuel economy, the 2017 Volt tops our scale like a number of battery hybrids and all-electric vehicles. The vehicle’s 106-mpg efficiency range is quite close to that of some battery-electric vehicles and goes up from the 98 mpg of the previous generation. It is more fuel efficient with its 42-mpg EPA combined rating in range-extended mode.

In our opinion, the 2017 Volt offers the best of both worlds: almost all-electric transportation without the need to worry about the battery getting depleted. When it comes to green driving, we think that the new Chevy Volt is a winner. Unlike the failing Obamacare, this car is on the rise. 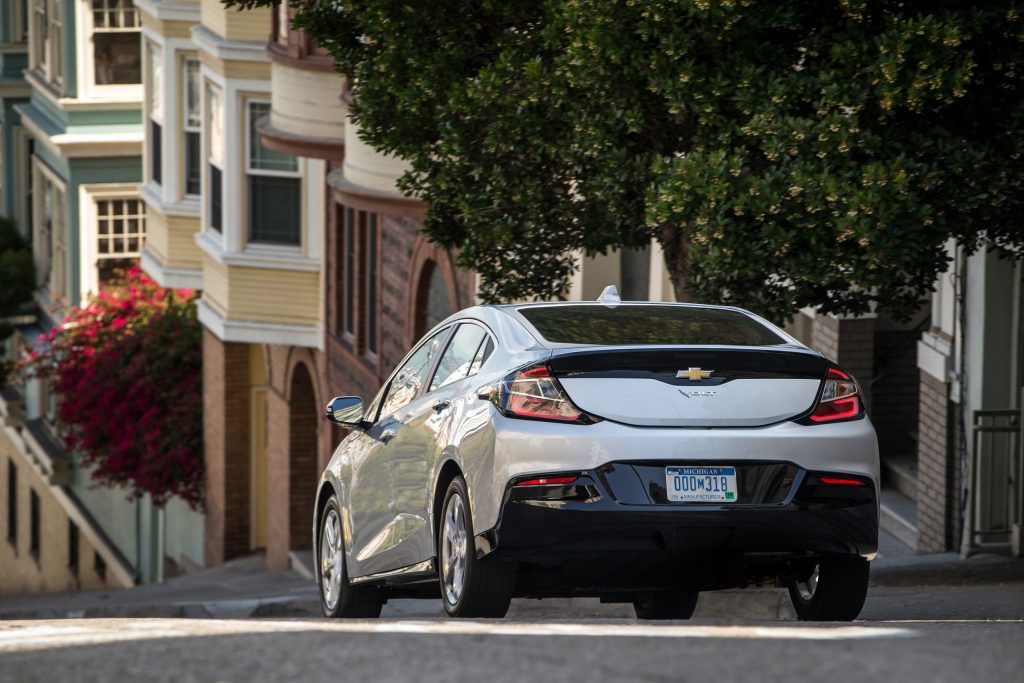 Although the 2017 Volt has an eco-image, we found that it is actually fun to drive, especially since it does not have the range anxiety that you often experience with pure electric vehicles. There is not any reason to start shivering like Jimmy McGill’s brother does in Better Call Saul when his brother is near any electricity!

With its gasoline-hybrid powertrain, you receive an impressive all-electric range as well as better acceleration and greater efficiency. The all-electric range is 53 miles, after which the gas engine starts up so that the battery recharges and you keep on going. When we tested the Volt, we recorded 59 mpge. When it comes to charging it up, it takes about 13 hours on the 120V while on the 240V, it takes about 4.5 hours.

We found the new 2017 Volt performs quietly and smoothly, which is fantastic. Not too many people are not impressed with that. Now only if those noisy neighborhood waking up motorcycles were just as quiet!

The 2017 Chevrolet Volt has some pretty impressive technological features. Let us start with the myChevrolet Mobile App as we think that was pretty cool. The app allows you to turn your compatible device into your vehicle’s command center. You can lock/unlock and start/stop your car with a mere tap of your finger.

You can also do a lot more with this technology – send destinations to your available navigation system, set parking reminders from just about anywhere, and view the diagnostic information. This awesome mobile app is a simpler and smarter way to stay connected with your compatible Chevy car.

The Apple CarPlay compatibility is a smarter and cooler way to use your iPhone to make calls, get directions, and listen to music with the Chevrolet MyLink display. You can also press the button for the Chevrolet MyLink radio with navigation that comes at a price of $495.

The Volt has storage for virtually all your things, including the wireless charger for mobile devices. Chevrolet has carefully thought out its design and has provided a calibrated feature that we are certain you will make good use of. Apart from this, the 2017 Chevrolet Volt comes with a Bose premium 8-speaker audio system to give you the best sound.

You also get the awesome 4G LTE Wi-Fi hotspot with limited data trial that ensures you have the strongest connections even while you are out on the road in the middle of nowhere or perhaps trying to escape the never ending buzz that exists in most cities. You can easily access apps, stream music and even continue your work while you are on the go with the most powerful connection. The reliable signal for your smart devices with the 4G LTE hotspot is another attractive feature.

If your vehicle is on, Wi-Fi is on too – available and ready so you can seamlessly connect up to 7 smart devices. We think that this is a cool tech feature to have as it is easy to use and convenient to have around. Kudos to Chevrolet for this one!

Apart from this, the RemoteLink app makes it easy to keep track of the data plan. You also get OnStar alerts from an Advisor. OnStar is a 5-year basic plan with navigation, automatic crash display, and much more.

Do you have teens at home? Well, then you will definitely love this tech feature. The new Chevy Volt offers Teen Driver Technology, which is a built-in system that helps in encouraging safe driving habits and lets you, as a parent, know exactly how your teen drove the vehicle.

When you input a PIN into your MyLink display, the system enables a host of features such as muting audio when occupants in the front are not wearing their safety belts, setting an upper limit on music volume, providing both visual and audible warnings when predetermined speeds are exceeded and alerting you if safety features such as Forward Collision Alert are triggered.

You receive two safety packages with the new 2017 Chevrolet Volt – Driver Confidence 1 Package, priced at $495. It includes features like side blind zone alert with the fabulous lane change alert and rear cross traffic alert. We think that these are some pretty nifty safety features to have in a vehicle.

Apart from these, the new Chevy Volt has fitted a high-resolution rearview camera as standard equipment. This is another feature which impressed us. It helps in mitigating the dismal over-the-shoulder rear-quarter view. The camera’s resolution is much better and the 8.0-inch center display screen which captures a crisper image as compared to any other compact car we have seen.

Although the 2017 Volt has not been given a rating by the NHTSA or the IIHS, it does offer a superb complete suite of active-safety systems to ensure your safety on the road.

What we liked: Stylish and modern exterior design, 53 miles on electric only, which is a huge jump from the 2015 model’s 38 and its quiet/smooth power.

What we did not like: We did not find the supposed 5th seat very useful. We were not sure why it was even there. We cannot imagine it being used that much.

The new Toyota Prius Prime and 2016 BMW i3 are two of the 2017 Chevrolet Volt’s major competitors. The Prius Prime is a plug-in hybrid that gives stellar electric range (22 miles) and excellent fuel efficiency when it is in gasoline mode but the Volt beats it in both aspects with an electric range of 53 miles and unparalleled fuel economy. The 2016 BMW i3 is a top energy-efficient car with smooth, powerful acceleration and agile low-speed handling, but the new Chevy Volt exceeds it in just about everything, from design to electric range and costs much less.

If you are looking for a plug-in hybrid that offers superb fuel efficiency, stunning-looking interiors and exteriors and refined driving, the 2017 Chevrolet Volt is definitely the one for you. The 2017 Volt is not for a large family or even perhaps for a medium size family. This car will not take you over some rough terrain nor will it pull your trailer but for some people this is a fantastic choice.