Don't sleep on the Golf!

There’s a phrase many of the young people are using that applies to my tester this week. And even though I’m not one to use trendy jargon or phrases, I’m going to say it anyway. The 2016 Volkswagen Golf R hit me right in the feels during my week with it.

Yeah, I realize how stupid I sounded saying that. Move on. When you are in a different vehicle every week, it’s hard to really get attached to one because the moment you do it will be swapped out with another one. When the fleet company took the VW Golf R back from me, after my amazing week with it, I was sad to see it go.

I was surprised how into this car I was.

The Golf R suffers a bit of an identity crisis. It’s close in most regards to the VW GTI and also the Audi S3. It’s stuck in the middle, price-wise, of those two vehicles, but as is the case with many middle children, it tries really hard to get noticed. 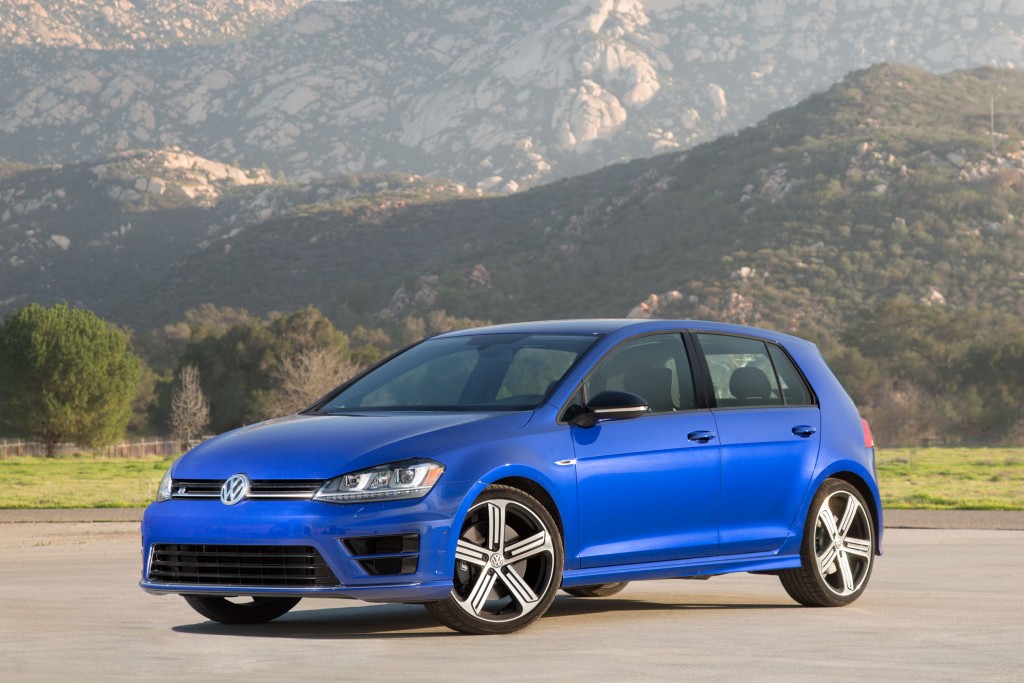 On looks alone it was hard not to take notice. The Tornado Red exterior fit perfectly with its small hatchback stature. The Golf R looked bold despite its small size.

With 19-inch performance tires, a rear spoiler, and quad tailpipes, there was an aggressive undertone to the Golf R. Xenon headlight and LED running lights jazzed up the front end. The overall styling of the Golf flowed with the rest of the Volkswagen family. It was simple, clean and not overly stylized. The exterior was appropriate for the type of car the Golf R is – which is a major sleeper car. 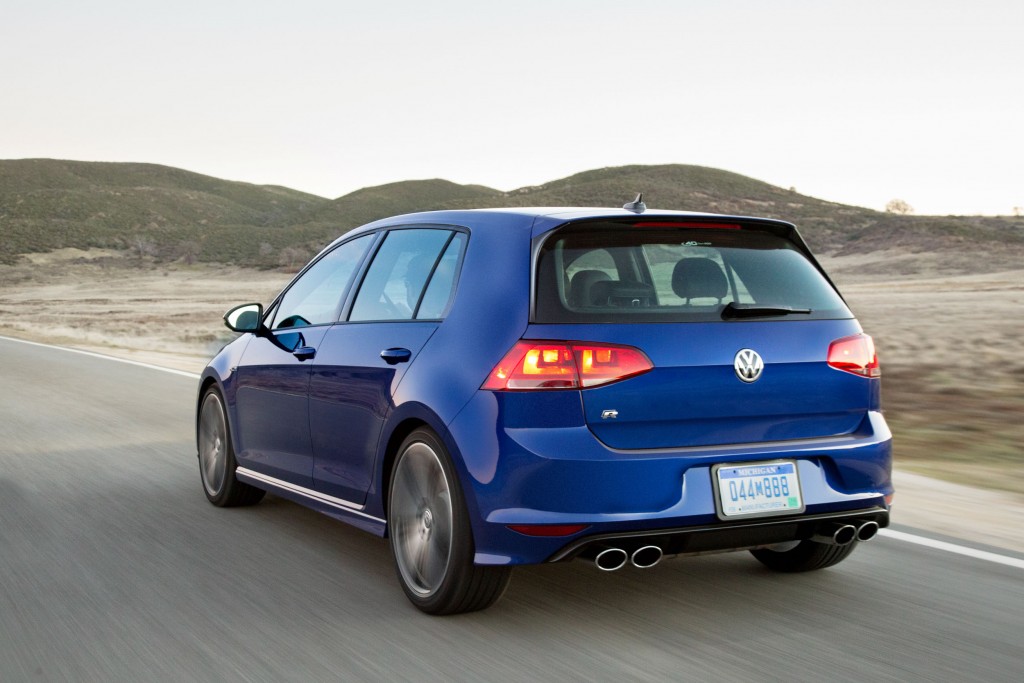 What lies under the hood is what makes it such a sleeper. Underneath the simple, conservative styling (and the few hints of aggression) lies one of the fastest four-cylinders I’ve experienced.

The 2.0-liter turbocharged engine produces 292 horsepower. It drives even more powerful than those numbers indicate. Mated with all-wheel drive, it gripped the road as the AWD system seemed to flow perfectly with the squatty performance of the car. My tester had the optional DSG automatic transmission which actually throws even more power into the mix. A six-speed manual transmission is standard.

But for such a small engine, it hummed like a muscle car. Those in the tuner car market would appreciate the beautiful sound that blasted out of the back of the quad tailpipe. And the sound wasn’t for show, as the Golf is immediately fast. One car site tagged the Golf R at 4.5 seconds in a 0-60 mph time.

The Golf R, with its AWD and superb handling would be a dream vehicle as a rally car. Each trip in it was a joy. I never got tired of hearing that whirring sound that it generated. Again, it gave me the feels (okay, I’ll stop saying that from now, I promise). 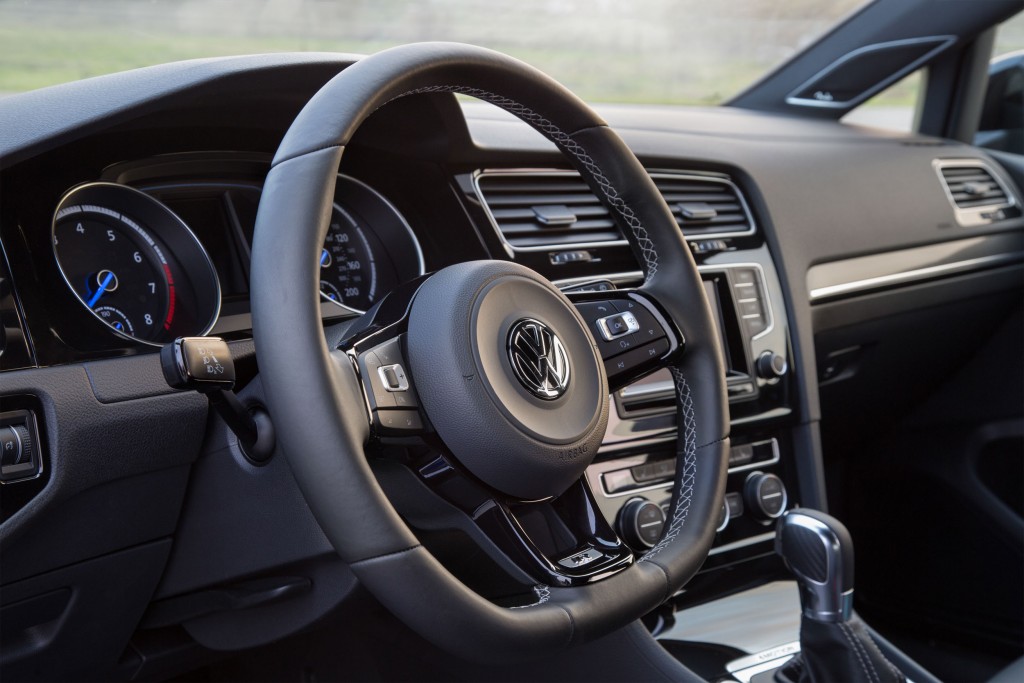 Inside, the Golf R’s design is similar to its exterior. It’s generally conservative with nothing too garish. There are subtle touches as part of the R package that reveal the car’s true aggressive nature. The R logo appears on the seats and the floor panels and carbon fiber accents are found throughout, especially spanning the dashboard. These subtle, aggressive touches are just enough to give the Golf R its personality. Besides, that engine does all the talking so well for it.

There’s a new infotainment system this model year, which is like a breath of fresh air. I found previous VW infotainment systems to be frustrating and dated. The one inside the Golf R runs on a 6.5-inch touchscreen that is quick to respond. The overall system is intuitive and attractive. The system integrates well with smart phones and runs Apple CarPlay. There is also an independent USB, which seems hardly worth mentioning except that in the past VW seemed opposed to providing the consumer with such a connection.

Fuel economy for the gasoline-powered hatchback is adequate. However, considering the size of the engine, you’d expect a little more than the 23 mpg/city and 30 mpg/highway it gets. But then again with the happiness that comes out of the tailpipes, you start to not care. The manual transmission Golf gets slightly better EPA numbers.

Pricing is the real issue with the Golf R. It is expensive for a small hatchback. My tester had an MSRP of $39,815. It was fully loaded with navigation, rear parking camera, keyless entry and heated front seats with leather. But still, it will take a specific consumer who is willing to pay for a car like this to fork over that kind of cash.

But again, that engine, and the sound of happiness and overall performance of the Golf helps justify it. Plus, hey, it’s cheaper than the Audi S3, and drives just as nice. (Never mind that the slightly less powerful GTI is $10,000 cheaper). It’s always the middle child you gotta watch out for.

Written By
Jimmy Dinsmore
More from Jimmy Dinsmore
When I get my test drive vehicles, I generally baby them. They...
Read More
0 replies on “2016 Volkswagen Golf R”