The Chrysler mid-size sedan is back!

In 2014 we were let lose behind the wheel of a Chrysler 200C. While the more docile model was impressive, the performance version of the 200 has been high on our list of test-drive dreams. And we were expecting big things, particularly in light of the 200C’s less than stellar sales figures. Indeed, the segment leader, the Toyota Camry, outsold the 200C by three to one, while Ford sported similar figures (2.5 to one) with the feisty Fusion model.

Our first hint that Chrysler has upped the ante is the fact that the 200S looks miles apart from the 200C. Its overall shape is recognizable to those familiar with the Dodge Dart, but with a cleaner and sleeker execution. The 200S also borrows inspiration from the Maserati Gran Turismo’s LED headlamps, and our tester came with the Premium Lighting Group package ($795), which included LED fog lamps and HID headlamps with LED daytime running headlamps. One of my personal favorite aspects of the design was the all-American Airstream trailers.

The car’s front end offers a glimpse at where all Chrysler is headed in the future. The headlights and grille are integrated seamlessly, and the car boasts Chrysler’s brand new emblem that sees the iconic wingspan extended.

Cocooning the new, wider emblem was a Ceramic Blue Clear Coat exterior paint job that was like no other paint coat I’ve ever seen. It was so striking I was even stopped by more than a few fellow drivers who wanted to know what the color was called.

Inside the 200S, American influences dominate. Indeed, the interior color options are named after three major US destinations: Fifth Avenue in NY, Sausalito in California, and Detroit. Our cabin was endowed with the exclusive Detroit trim ($995), with black cloth & Ambassador Blue leather seats. Detroit also offered a leather-trimmed heated & ventilated sport driver seat and leather (vented) seat cushion, plus ventilated front seats. Blue leather accents are also found in other spots around the car and were complimented by black chrome accents.

We were totally impressed with the ergonomic design principals implemented throughout the car’s interior. One of the most obvious of these ingenious additions is the pass-through storage that connects the center console with the center stack – located below the electric parking brake, HVAC buttons, and rotary shift knob. Plus, the cup holders (located in the center console) can be slid in and out to increase elbowroom room, which comes in handy when transporting the arm wrestling world champion (you do that, too, right?)

A few standard features also proved their worth, particularly the ambient LED lighting that transformed the interior into a romantic, cozy cabin. 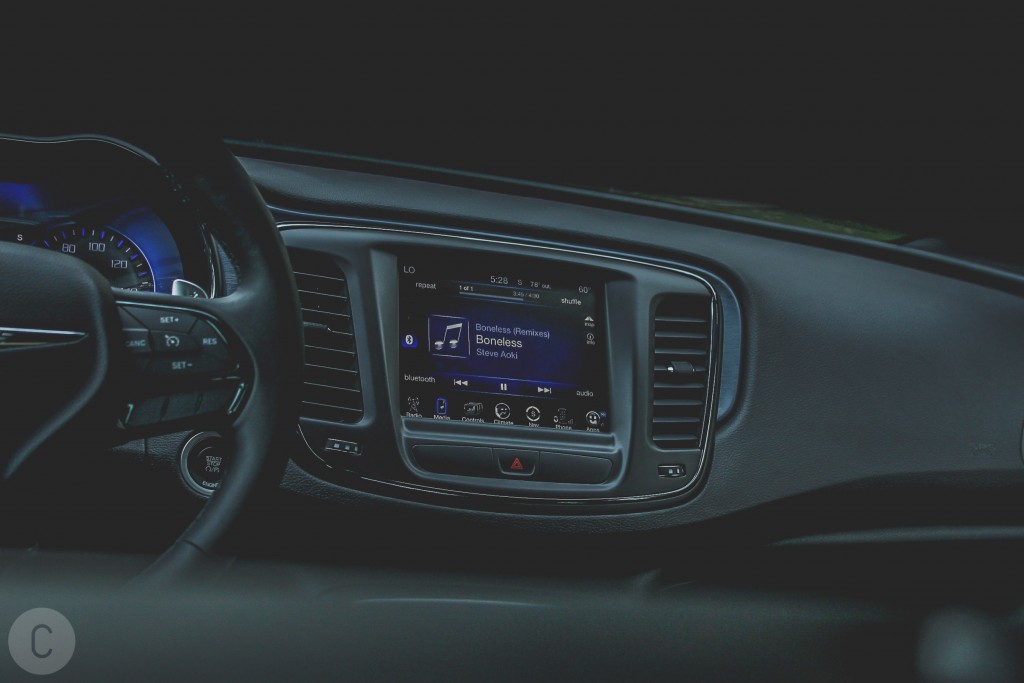 On the entertainment and navigation side things, the $1,495 navigation and sound system more than kept up with the high quality cabin. The package saw a Harman radio and 9 Alpine 506-watt amplifier combine with a premium 7-inch driver information display cluster. GPS navigation (with antenna input) and Uconnect (the best Infotainment system available today) stats are displayed on the 8.4-inch touchscreen display. An auto-dimming rearview mirror with microphone closes out the package, but the tech highlights don’t stop there. For an extra $995, Chrysler throws in blind spot and cross path detection. We hope Chrysler weren’t watching, because the cross path detection saved my bacon on one memorable occasion on the highway.

The important big wigs at the EPA have taken the 200S out for a spin and rated the car as being capable of achieving 18 mpg in the city and 29 mpg on the highway for a combined 22 mpg. Our numbers were better than expected at 21.2 mpg after a week on the road.

The 2015 Chrysler 200S AWD is equipped with a 3.6-liter V-6 engine backed by a 9-speed automatic transmission, which is good for 295 horsepower and 262 lb.-ft. of torque. The ride quality is comfortable, even with the low-profile 19-inch wheels.

Because of its hefty curb-weight, handling can be temperamental, and the AWD system disconnected the rear axle on occasion. The AWD model option adds a further $2250 to the final cost of the sedan and a significant amount of weight to the curb.

Overall, though, the performance was impressive, and we can confidently say this is a QUICK car. It corners gracefully while remaining level. The throaty engine is satisfying, mostly due to the fact the 9-speed transmission works overtime ALL the time, though it’s unlikely you’ll ever push the car to 9th gear. In fact, the 9-speed transmission is arguably unnecessary, and hampered our enjoyment while cruising the city streets. A 9-speed sounds nice, sure, but the practicality of using all available gears just isn’t feasible or desirable in heavy traffic conditions and I estimate we spent a total of nine minutes in the ninth gear. For this reason, we remained in Sport and manual shift modes during our test week.

Like it: With a competitive price tag (even with premium extras), powerful engine and smooth drive, plus a sleek and sophisticated makeover, the 200S is a top choice for anyone looking to buy a luxury mid-size sedan vehicle. Oh, and that AWD system is sensational!

Leave it: The 9-speed transmission was frustrating and unreliable, while the rear seating is tight, making long trips uncomfortable for backseat passengers.

There are a few main players vying for the top spot in the mid-size sedan segment, the most obvious of which is the Ford Fusion. Completely redesigned just a couple of years ago, the Focus remains one of the sleekest models available.

Volkswagen’s Passat, available with diesel power, is arguable the most comfortable of all the competitors, while the Honda Accord proffers increased cabin room.

Next up is the Kia Optima, and despite being one of the older designed competitors, it still stacks up well despite unfavourable fuel economy stats.

Much like the Chrysler, the Accord offers a V-6 engine and is easy on the eye while performing at the top end of the competition. Finally, there’s the no-frills Chevrolet Malibu, which is reminiscent of where the mid size market was half a decade ago.

Despite the fact we believe the Fusion is still king, the 200S comes a close second.