The Ford F-150 has enjoyed a long run as the top-selling truck in the U.S, and in response to new regulations set to be rolled out, they’ve released a significantly lighter model for 2015 with a lightweight aluminum body and aerodynamic design. In fact, some commentators suggest the pickup will revolutionize the industry, and with the title of 2015 North American Truck of the Year, things are looking pretty good. The accolades don’t stop there, the NHTSA gave the F-150 SuperCrew a five-star overall rating, helped by the inclusion of forward-collision warning systems.

The 2015 Ford F-150 body is compressed with the assistance of aluminum panels that are glued and riveted, and the ladder frame uses buffered high-strength steel. Overall, Ford estimates the reconfiguration shaves as much as 700-pounds off the truck’s curb weight, making way for downsized engine units and increased fuel economy and performance.

Quieter, with high towing capacity and better fuel economy, the 2015 Ford F-150 is a brilliant example of where the pickup market is headed.

In the spirit of aerodynamics, the F-150 is angular and no-nonsense, and to the naked eye you’d never guess the 2015 Ford F-150 XLT 4×4 SuperCab was a whole new beast. The exterior of our tester wasn’t as groundbreaking as we assumed considering the new body architecture, but it did standout nonetheless.

With a Ruby Red Metallic tinted clear coat ($395) over the fully boxed steel frame and 18-inch chrome-like PVD wheels, the pickup welcomes a locking removable tailgate and rear privacy glass. Chrome is king with the XLT Chrome appearance package ($1,695), and the accents – like chrome step bars – add a prestigious air to the pickup.

First engineered by Ford in 2009, the ever-popular easy fuel capless filler makes an appearance. For those who haven’t had the joy of using a capless filler, it assists drivers in avoiding splash-back at the pump, while keeping out water and thieves.

The truck’s fog lamps are framed by a tall grille, and the halogen headlamps are reminiscent of F-Series trucks from yesteryear thanks to rectangular inserts. LED side-mirror spotlights ($175) are thrown in for good measure and better lighting.

Our tester was also equipped with the XLT Series, rear window defroster ($2,150 extra) and a host of other additions.

The all-important backend sees the tailgate double as a spoiler. We were glad to receive the tailgate steps with handrail ($375) that slide out for ease of use and made accessing and loading the bed a cinch. Indeed, the steps had no issue supporting the weight of myself and a friend, and it is possible of holding up to 500-pounds.

The Boxlink system was also great, and surprisingly simple to use. The system works by installing fitted cleats and brackets to the truck’s bed to encourage secure, anchored dividing of loads.

Any slippages that may creep through the Boxlink system are kept in place by the $475 spray-in box liner that I’d feel comfortable enough to ride on myself, particularly since I could enjoy the LED box lighting ($125) with the wind on my face! In fact, just roll me on via the loading ramps, which lock to the bedsides, and I’ll be happy as Larry.

The well-rounded rear is made complete with a Class IV trailer hitch and an integrated trailer brake controller ($275).

For all the changes the Ford F-150 has undergone, you wouldn’t know it to sit in the truck. Our medium grey cloth interior featured color-coordinated carpet and floor mats with a tilt/telescope steering column and 4.2-inch center stack multi-function display. You heard right, that’s a minuscule 4.2-inches; far too small in our opinion, particularly considering the size most competitors install. To put that into perspective, my iPhone 6 Plus screen is larger. Luckily, the rest of the non-nonsense but well deigned cabin is large and comfortable – and quiet!

According to the EPA, the truck can be pushed to 18 mpg in the city and 23 mpg on the highway, for a combined average of 20 mpg. How close did we get to achieving these numbers? Pretty close! After a week with the SuperCab we observed 17.1 mpg.

Four engine options are available to would-be drivers, and our tester came with the mid-range 2.7L V-6 EcoBoost engine ($795), supported by an electric 6-speed automatic transmission and Tow Mode. With this tight little setup – and the 4×4 configuration – you’ll be able to push the car to 325 horsepower and 375 lb.-ft. of torque. In other words: this truck is fast! We’re talking 5.7 seconds on the 0-60 mph sprint and the lighter curb weight is partly to praise for these blistering speeds.

Of course, a quick and light truck with a sizable loaded-to-unloaded ratio sounds like it’ll have issues maintaining payload capacity, but in this instance it’s simply not the case. Uneven terrain and potholes are tackled with ease while reducing head loss, no matter the load. During our week with the SuperCab the bed held almost the entire contents of my garage without complaint, though we didn’t test it to max capacity (8,500 pounds).

The power rack and pinion steering was the best we’ve had in a truck, and reinforces the car-like drive experience. One drawback, however, is the truck’s voice; it lacks the grunt and feel of a regular truck. However, we’ll happily forgo noise for ability, and the SuperCab is more than able. For example, the 4-wheel disc brakes with ABS, onboard mounted rear shocks and trailer sway control work in harmony to create a stable and sure-footed drive. 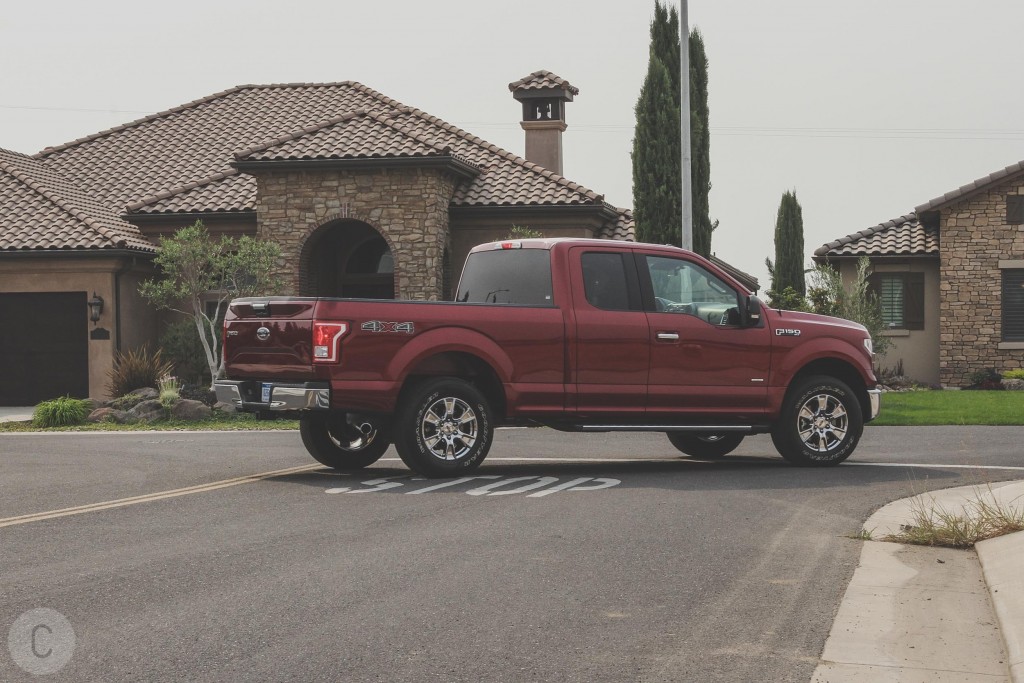 The electric 4×4 shift-on-fly feature (with selector switch on the dash) allowed us to switch between 2WD and 4WD as conditions changed, and shifting between the two was seamless.

Our load on the bed was fairly heavy, but the power tailgate lock kept it all safely stowed away, so it didn’t end up all over the road when tackling tricky hills. Indeed, hills aren’t an issue at all, and we implemented the hill start assist function regularly. Likewise, the fail-safe cooling system ensured the truck never over-exerted itself, even when hill starting every few minutes!

For all its awesome features, the F-150’s tech inclusions were relatively stark. Don’t get us wrong, all the essentials are here, including remote start, MyKey, cruise control, rearview camera and Sirius XM satellite radio, but the center-stack’s 4.2-inch screen was smaller than should be acceptable. We would have preferred a larger screen, so the detailed towing data, rear-view camera vision and driving stats could be viewed without squinting. The basic Sync system is prehistoric, and getting used to all the buttons and switches can be confusing (or maybe I’m just getting old).

It’s not all bad, though, and the voice activation function works well. The safety features are also worthy of our time. The Sync system comes in handy (for once!) when airbags are deployed, in which case the truck will send a 911 Assist call.

Airbags include front seat mounted side impact and safety canopy side curtain varieties. In the event you are involved in an accident, it’s reassuring to know the SuperCab comes with AdvanceTrac and Roll Stability Control, so you don’t need to worry about losing your load, or your leg, in and accident.

Do stupid drivers leave you seething? Us too, and the center high-mounted stop lamps give idiot drivers plenty of visual cues that SHOULD guard against any rear-ending.

Our highest praise goes to the SuperCab’s lighter aluminum frame, and the speedy numbers it posts as a result. Another highlight is the quiet and comfortable cabin, and to cap it off, the car is easier to maneuver and more capable than ever before.

Lack of rear doors is a drawback, and the small multi-function screen really isn’t up to modern standards. Concerns regarding the costs associated with the repair of lightweight aluminum crossed out minds, and we’re sure it will dissuade some potential buyers.

It’s hard to argue against a car that has out-sold any other in the American market for over 30 years, but there are a few competitors willing to throw their hat in the ring. First there’s the 2015 Dodge Ram, which has the option of coming with a turbocharged diesel engine for highly efficient results. It also offers a comfortable and hushed drive with second-to-none in-dash infotainment set-up.

Another eager competitor revving its fuel-efficient gas engines in a bid for attention is the 2015 Chevrolet Silverado. The Silverado boasts some of the best handling and ride quality in the full-size segment.

Despite their best efforts, though, it’s almost certain that this incarnation of the F-150 will continue to help Ford’s reign.