2007 was a great year: the first iPhone was released; Argentina elected its first female president; and we spent our free time watching the first Transformers film and reading the last Harry Potter book. But the most exciting event of 2007 – in our opinion, anyway! – was the roll out of the Buick Enclave. Modelled on Lambda architecture found on the less refined GMC Acadia and boring Chevy Traverse, Buick’s Enclave raised the stakes, and improved luxury and design, when the triple-row high-end crossover was released. One criticism some commentators initially had was that the car failed to differentiate itself in terms of powertrain and safety from the Chevy and Acadia.

The original 2007 model replaced the outdated Terraza and Rendezvous, and came with a 3.6L V-6 engine that produced 275 horsepower and utilized a 6-speed automatic transmission. By 2009, direct injection technology had been adopted and the V-6 engine was good for 288 horsepower. A minor update occurred in 2013, but the big guns were saved until now. The 2016 model receives the same reliable engine and glowing safety reports. Capable of transporting up to eight passengers comfortably, the Enclave welcomes a rear-view camera as standard and an all-wheel-drive option.

They say dark-colored clothes are slimming, and Buick have taken note. Our Dark Sapphire Blue Metallic painted exterior made the mid-size SUV appear more compact than you’d assume for a vehicle with three rows of seating.

Keeping us on the straight and narrow are 19-inch chrome clad aluminum wheels and HID xenon projector headlamps with LED signature accents.

Convenience is the Enclave’s middle name, and to prove it there’s a power rear liftgate accessible via the key fob or center console, plus roof racks and side rails. In fact, you can carry almost as much ON the car as you can INSIDE it.

The Enclave has always enjoyed meticulously sculpted lines and black-chrome waterfall grille, and our tester was no exception. There are a few noticeable upgrades, though, and one of the best is the signature wing-shape LED lighting and chrome accents. With direction adaptive capabilities, the headlamps swivel in response to driving conditions, meaning even the swiftest cornering is illuminated precisely. Stylish as well as functional, the headlamps are surrounded by translucent blue detailing.

If you were under any misconceptions that this was anything but a luxury vehicle, you just need to observe a few of the Luxury Package features. What do these include? We’re glad you asked, because they’re numerous and awesome. First there’s the dual heated outside mirrors that can be folded and adjusted electronically. The exhaust outlets are outlined by a distinctive rear fascia and punctuated with LED-accented taillamps for a back end that is elegant and sleek, much like the rest of the car.

Matching the Enclave’s striking exterior is a refined Titanium-trim cabin that seems vast and expansive, especially because of the ‘low and away’ instrument cluster that keeps everything at close reach without being intrusive.

The materials feel as they should: premium! From the leather appointed steering wheel with audio controls to the brushed chrome trim and splashes of warm wooden colors, the whole package is contemporary and stylish.

The first-class seating is also pretty plush and both the first and second rows are covered in leather. The all-important driver’s seat is 8-way power-adjustable with lumbar (and mirror) memory for not one, but two, drivers. Very smart! The front passenger receives a similar setup, with the same 8-way power-adjustable seat with lumbar support and power-recline capability that takes advantage of cabin space.

Another perk of our Premium Package was heated and cooled front seats with temperature controls that encouraged you to heat or cool only selected sections of the surface for optimal results.

In the second row you’ll find a smart slide captain’s chair, which allows you to slide the second row forward with a single hand for quick and easy access to the final row. This is indispensible for anyone carrying babies or heavy bags. Passengers riding in the third row are given 60/40 split bench seats.

But back to the driver. He or she – or me in this case – are given use of an auto-dimming rearview mirror, power windows with express up/down function and power tilt and telescoping steering column (memory settings for two drivers).

Cargo space is generous, and peaks at 23.3 cubic feet behind the third row, or a massive 115.2 cubic feet when the second row is also dropped. 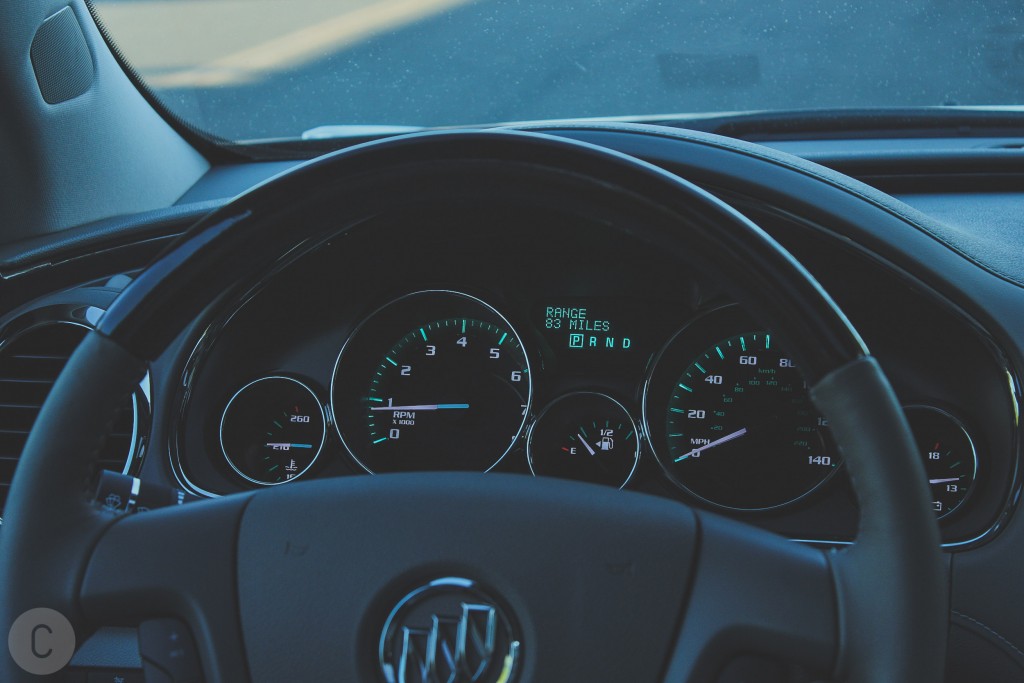 Our friends at the EPA estimate the Buick Enclave is capable of 16 mpg in the city, 22 mpg on the highway and 18 mpg combined. Our average after a week of driving was 17.4 mpg. This number seems kind of low, especially considering some new competitors, like the 2016 Acura MDX and Toyota Highlander rate more favourably.

A mid-size SUV should have a mid-size amount of safety and security features. But this wasn’t enough for Buick, so they’ve crammed in a jumbo-size amount of features to ensure safe passage wherever you journey.

Remote keyless entry is one of the longest-range we’ve used, and can start the car’s engine from as far as 200 feet away.

Unless you’re a reckless driver, or you’re the victim of another driver’s stupidity, the airbags will never need to punch you in the face. A combination of safety features sees to this. What features? Well, let me regale you with the cavalcade of safety elements starting with the anti-lock brake system and Stabilitrak stability/traction control.

The rear vision camera (now standard) works with active guidelines displayed on the IntelliLink screen (more on this in the tech section). Any areas you have trouble seeing are covered by the Side Blind Zone Alert with Rear Cross-Traffic Alert that use radar senses (we told you this thing was smart).

I tend to be impatient in traffic, so I always appreciate the addition of Forward Collision Alert, and the Enclave’s system relays audio and visual warnings to guard against potential danger. The Lane Departure Warning also uses audio and visual prompts, so the SUV is covered on all fronts – and sides.

Nobody ever wants their car stolen, and the new Enclave has a number of intelligent upgrades to ensure this is never a possibility. An engine immobilizer theft deterrent system is a good start. 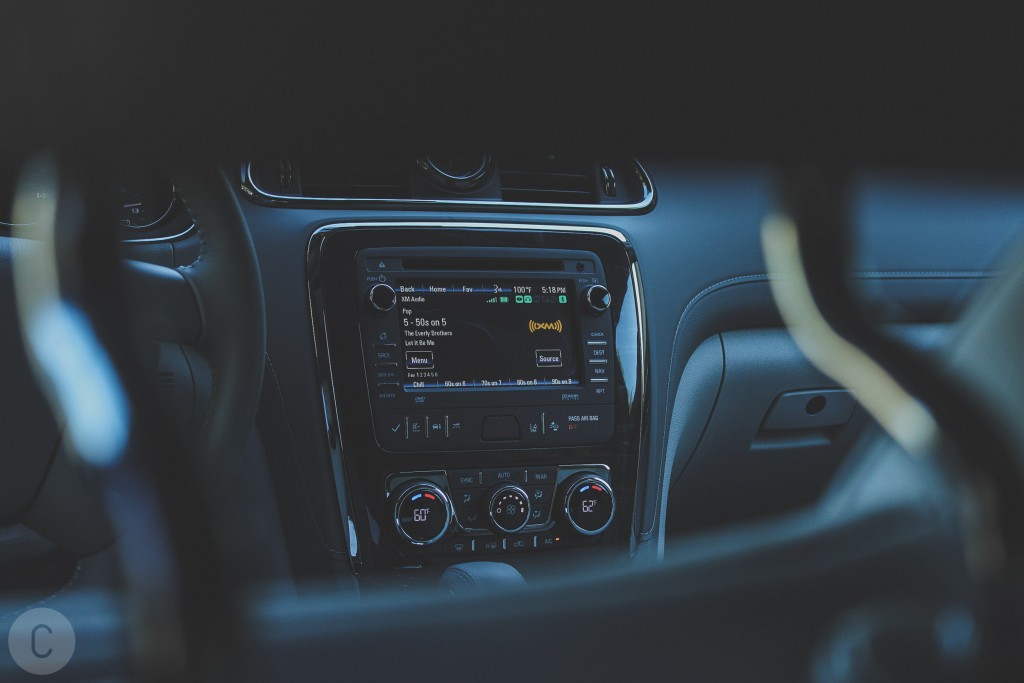 We’ve taken a look at some of the technologically advanced safety features, but the surface has barely been scratched. Connectivity is ensured thanks to OnStar 4G LTE with Wi-Fi hotspot that automatically enables whenever the car is in use. In case you weren’t aware, 4G LTE is the quickest and newest mobile data network available, and it performed as I hoped. Some ten times faster than the previous generation, our internet signal was always strong and reached into every corner of the Enclave (big bonus for anyone with tech-obsessed kids).

Another highlight was the intuitive IntelliLink color touch radio that was easy to customize and simple to master (even little fingers found it a breeze to manipulate). Among other things, IntelliLink offers XM NavTraffic, hands-free voice and touch-screen controls that were accessible through Bluetooth enabled smart phones.

Our car came with the Premium Audio Package, and I loved it! The package saw a Bose 10-speaker sound system with premium surround sound and surround amplifier fill the whole cabin with clear, smooth tunes. 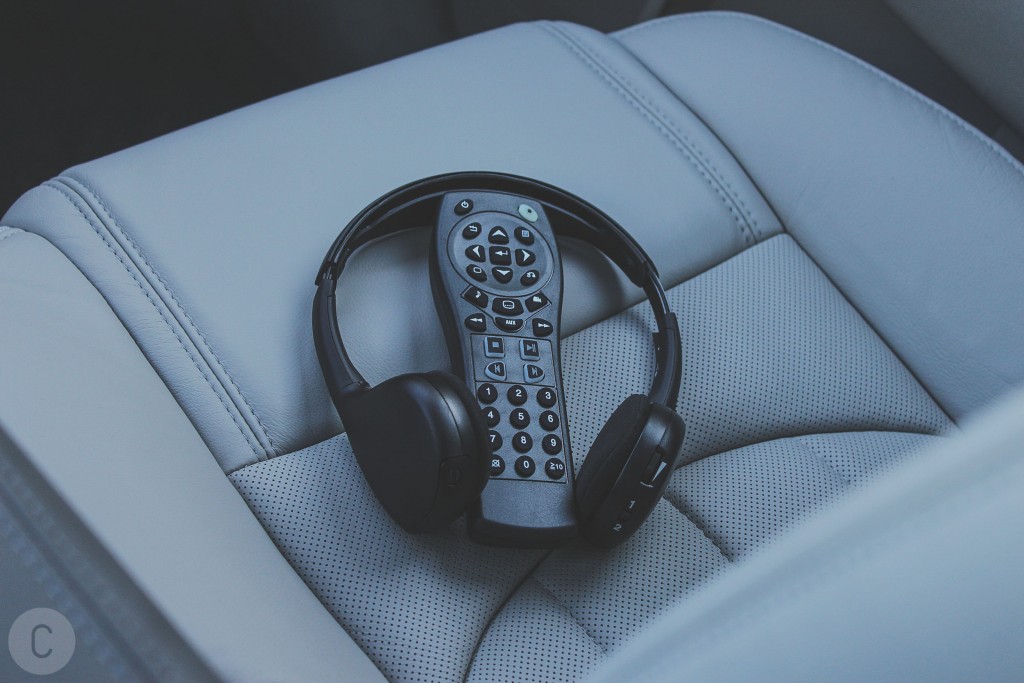 The Enclave is a popular beast, and my family and friends barely left the comfortable cabin while it was in my possession. The Rear Seat Entertainment package ($1,395) probably had something to do with it, and I’m beginning to think Buick did too good of a job at entertaining backseat passengers (I rarely enjoyed a solo drive).

While drivers and front passengers are given audio and video input jacks and a three-prong 120V power outlet, they’ve bestowed the back with a rear power outlet, remote controlled DVD player, 8-inch-diagonal LCD flat screen and two pairs of wireless infrared headphones. To be honest, I forgot there were two kids in the back seat during one trip to the beach, and quiet children can only be conducive to safe driving, so Buick get extra brownie points here.

Blisteringly fast: two words I like to see combined when discussing vehicle performance. Equipped with a 3.6L SIDI V-6 engine and 6-speed automatic transmission, the Enclave can reach 288 horsepower. I was surprised that even when every seat was filled, acceleration remained swift and smooth.

Our AWD system worked seamlessly and I would certainly opt for this over the front-wheel-drive variety. We’ve heard it’s particularly useful for those living in chillier climates who enjoy extended road trips. Speaking of extended road trips, the Enclave is a mighty traveller that tows 4,500 pounds with ease.

The 19-inch wheels performed exceptionally, no matter what terrain I forced it to cover. They enabled a soft ride that handled as nimbly as a much smaller car. For a three-row SUV, the Enclave always felt sure-footed and dexterous.

Turning our attention to steering, the response was admirable for such a hefty car and considering it’s height, body roll is barely worth mentioning. Don’t get me wrong, you know you’re operating a heavy vehicle, especially when starting and stopping, but Buick have engineered it in such a way that weight never feels cumbersome, though it can nosedive is you slam on the brakes, so treat the firm pedal accordingly.

I’m still dreaming of the luxurious and spacious cabin, and I’m sure my family is wishing they could spend more time in the roomy 3rd row (you can’t say that of many back rows, let alone a third row). The safety features were so comprehensive it is only right they receive praise, and I’m happy to pay up. Likewise the 4G LTE connection was flawless and the ride was smooth.

Not much to complain about here. Sure, fuel economy isn’t great, and it can get pricey with extra inclusions, but as an overall package it’s hard to beat.

Taking on the 2016 Buick Enclave Premium AWD in the luxury mid size SUV market is the rough and ready Dodge Durango with its HEMI V-8 and the Acura MDX that ranks as the Enclave’s closest competitor. The Buick ultimately comes out on top because the Acura looks uninspired, though it manages better fuel stats via a V-6 engine.

Next up on the starting grid is the Audi Q7 that doesn’t offer a cabin as spacious as the Enclave, followed by the impressive Ford Flex and Lincoln MKT. The two latter models feature more comprehensive tech components and produce lively and engaging drive experiences.