With all the talk of autonomous vehicles, it seems that enthusiasm for the act of driving is waning. Gone are the days of hitting the open road with no destination, and just out for a stroll, be it in a roadster, a muscle car or a sports car. I’m waxing a bit romantic here, but my tester this week made me feel this way.

The 2016 Mazda MX-5 Miata is a dying breed. The Miata is a roadster that really makes the art of driving something enjoyable. From Sunday drives to daily commutes, you’ll sit back, with the top down and enjoy your time behind the wheel. The Miata is that good.

Now 200 pounds lighter, and completely redesigned for this model year, the Miata hasn’t lost a beat from its previous generation, in fact, it’s better in most regards. 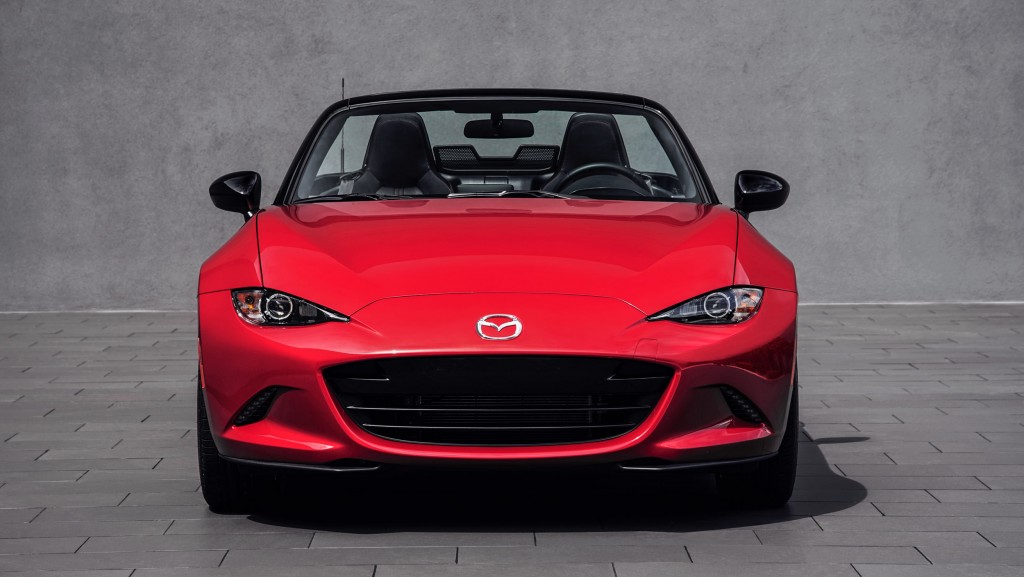 On looks alone, the Miata holds true to its heritage, but adds some modern styling. This drop top looks like its meant to be on the open road. With a short stature and low profile, the Miata is sporty looking. It has such a classic car look with a curvaceous profile. The overall appearance has a perfect blend of cutesy and aggressive styling.

17-inch alloy wheels look sharp on the Miata which has a squatty appearance with a low profile. The Miata seems to sit on the ground and hug the road (which is great because that’s how it drives too).

The cloth convertible top is easy to retract. Though it’s not electronically retractable, releasing of one lever and you can easily slide the top back and push into its rear compartment. Some have been critical of the manual method for opening and closing the top, but it’s much quicker than waiting for other convertibles which did it mechanically. As someone with a bad back, I did have to twist awkwardly in the tiny seats in order to release it out of the rear compartment to put the top back up. 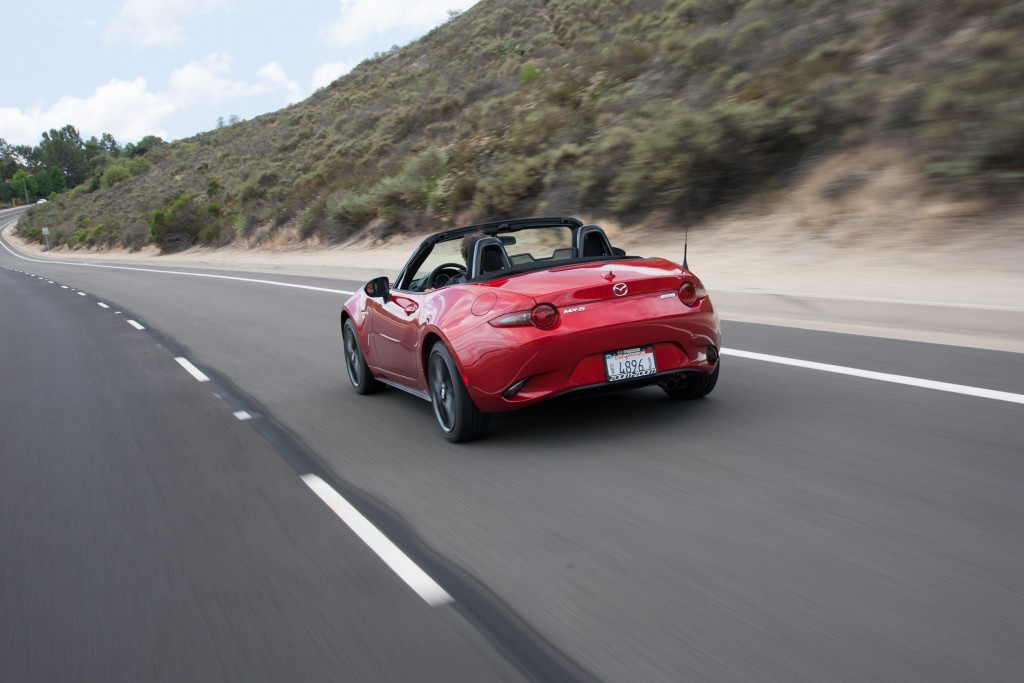 Remember how Mazda used to have that slogan Zoom Zoom? Well it had to be centered around the Miata because it’s a real driving machine and is ready for zooming. The Miata is one of those vehicles where you can’t judge it by looking at the window sticker and output numbers. A 2.0-liter engine powers the 2016 Mazda MX-5 Miata and produces 155 horsepower and 148 lb.-ft. of torque. Those numbers don’t look very impressive. This new generation Miata actually has slightly less power than the last model.

But since it weighs significantly less, the 2016 Miata feels quick. A manual transmission is standard, to appeal to the true enthusiast out there, but my tester came with an optional six-speed automatic transmission that had driver select mode. In sport mode, the Miata is unbelievable. Snug to the road, it hugs the road and corners in an exhilarating manner. Despite the output numbers, the Miata is tuned in such a way that it feels like it could handle itself on a track and is more than up for around the town driving.

Switch it to sport mode, enjoy crisp, responsive steering and find a winding country road to get maximum driving pleasure out of this roadster. 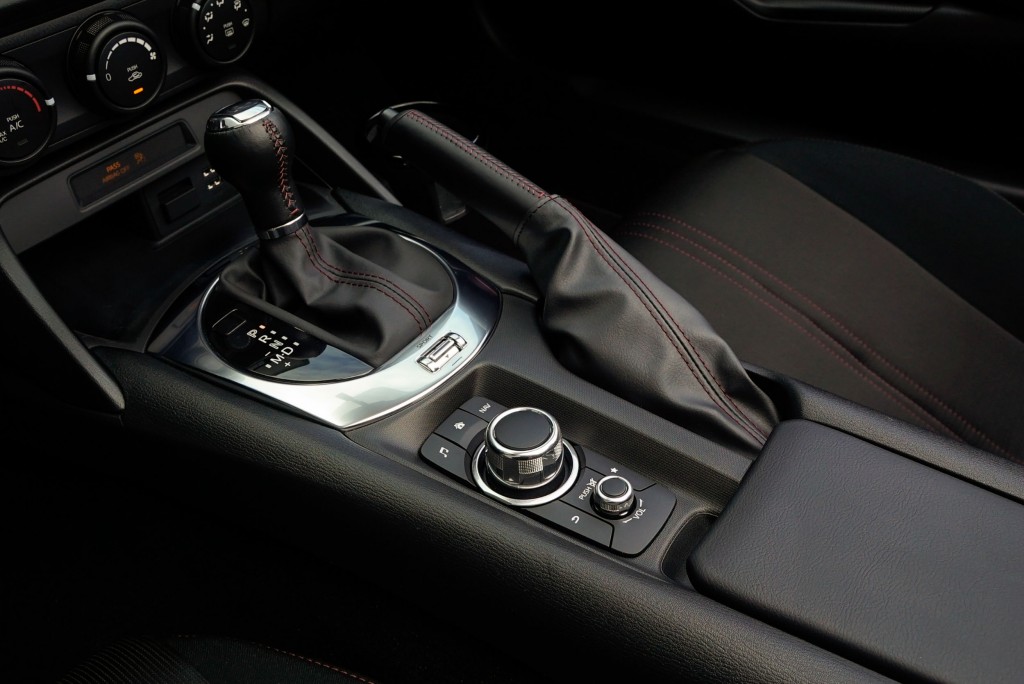 Inside, space is limited in this two-seater. With the top up, head room is quite snug. Those over six-feet will be extra cramped. The seats are comfortable for being so small. And me, with my bad knees and bad back, had little trouble getting out of the car, despite how close to the ground it is. My tester was the Grand Touring which comes with a well-designed and upgraded interior. Soft materials are used which help shield a little of the road noise. Although with the top up, the Miata has a loud cabin. But it’s to be expected and has been that way for many other versions of the Miata.

Technology is adequate for the Miata but the infotainment system is cumbersome and lacks an intuitive interface. While the touchscreen itself is nice and bright, there’s a clunky auxiliary control knob that is poorly placed and adds aggravation to the entertainment system. Setting preset channels requires unnecessary extra steps. There is a USB port for phone connectivity and Bluetooth is now standard for this model year.

There are three trims for the Miata: Sport, Club and Grand Touring. Pricing on the sport mode starts under $26,000 making this one of the most affordable convertibles on the market. My tester, the top-of-the-line Grand Touring had a base price of $32,090.

Fuel economy for the Miata is 27 mpg/city and 36 mpg/highway. So for a quick, fun-to-drive car, it is also a fuel sipper, which means more open road driving and less stops to refuel.

As convertible season fades away, the memory of the Miata will linger for me. It was one heck of a fun car to drive. Slide the top open, aim toward the windiest road you can find and enjoy the zoom!