Meet the 2015 Audi A3 TDI FWD S tronic: it might be a mouthful, but it’s a tasty little morsel we can’t get enough of. After testing the petrol models – the A3 1.8T and the A3 1.8T Cabriolet – the new diesel offering didn’t disappoint.

North American drivers can choose from a number of A3 models in 2015. Two A3 sedans (the 1.8L or 2L TSFI) offer their services, with varying trim levels determining their ultimate price tag. The Cabriolet also enjoys the A3 badge and is again offered with either 1.8T FWD or 2.0T quattro powertrain. Finally, the A3 TDI clean diesel sedan has just arrived in the country and lives up to – and builds upon – the premium A3 standards.

First introduced in the US in 2009 – and leading the clean diesel movement ever since – the TDI’s clean diesel technology offers low-end torque from the SL TDI FWD engine for reduced fuel consumption (they have been proven to be 30 per cent more efficient than gas varieties) and zippy acceleration and cruising. Essentially, it gives drivers an eco option that doesn’t skimp on power.

Let’s take a fine toothcomb to the entry-level premium car and take a spin in the 2015 Audi A3 TDI FWD S tronic, with innovative new tech, gorgeous craftsmanship and pristine performance.

A striking Scuba Blue Metallic paint color ($550) adorned our TDI, and it was a shade that left us looking for our snorkels and heading to the beach. Overall, this is a good looking Audi and we were also lucky enough to drive a car fitted with the $2,550 A3 Premium Plus package that bestowed the car with 18-inch 10-spoke-design wheels and Continental Sport Contact all-season tires (opposed to the less inspiring standard 17-inch 10-spoke-dynamic-design wheels). We also enjoyed heated exterior mirrors, Xenon Plus headlights with LED DLRs and taillights, and aluminum window accents that gave the sedan a slightly sporty demeanour. Power mirrors and rain sensing wipers round out the equation on this finely constructed exterior and we couldn’t wait to get inside.

A simple black and aluminum interior package welcomed us as we entered the A3. But don’t let the word ‘simple’ fool you; plenty of high-quality and luxurious elements have been included, like heated power front seats with 4-way lumber support and 12-way power settings for the driver. Despite this, we couldn’t help but feel the carmaker was trying just a little too hard, and a number of the luxury elements – like the leather – felt less sleek than top-quality leather should. Nevertheless, it was soft to touch, and the 3-spoke leather-wrapped multifunction steering wheel was a highlight.

Also part of our A3 Premium Plus package, the panoramic sunroof with retractable sunshade was popular among back seat (60/40 split-folding) passengers and the dual-zone automatic climate control was generously distributed throughout the cabin. Unlike some car’s we’ve tested, that barely manage to offer a whisper of air to those in the back, this system gets into all the cars corners.

Foregoing the slightly convoluted instrument panel found in A3s of the past, our new A3 featured a more streamlined, user-friendly cockpit-like panel that was oriented horizontally. Chrome rings surround sexy circular vents, while tiny climate-control knobs look great with the hooded gauge cluster. Indeed, the dash is spacious with oodles of free space.

The cockpit, like the rest of the car, is build for long-haul touring and is spacious enough that I could have spent more than a week in it! The trunk offers 13 cubic feet of space for tents, bags, the kitchen sink or whatever else you need to cart along with you on your next road trip. 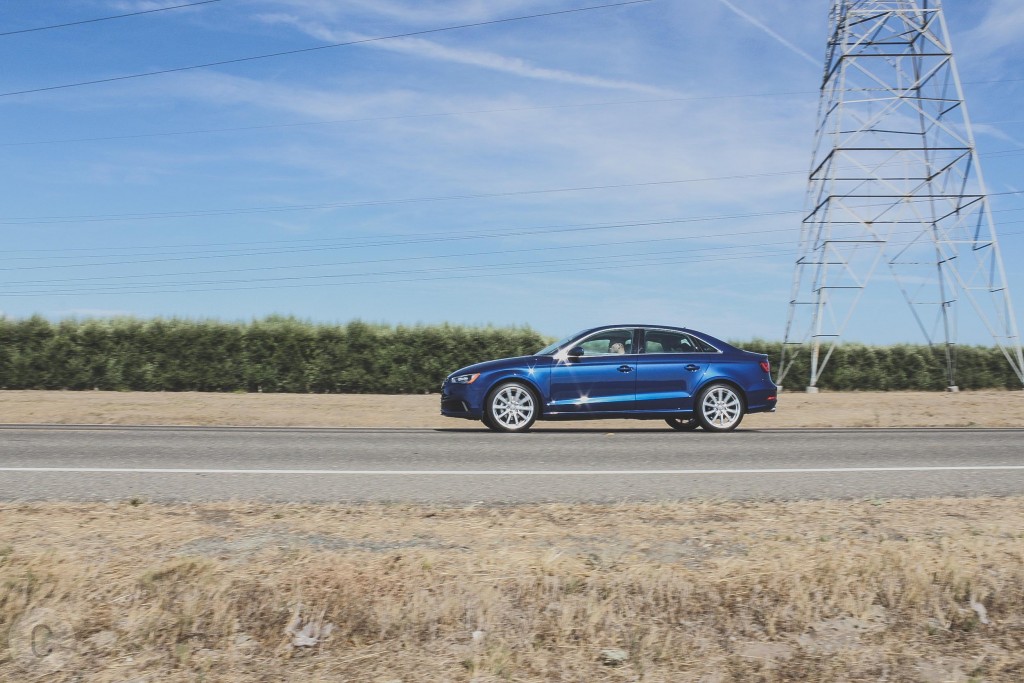 Diesel is synonymous with favorable millage and the 2015 diesel A3 is no exception. The EPA estimates the sedan can achieve 31 mpg in the city and 43 mpg on the highway, for a combined average of 36 mpg. We spent some quality time with the sedan on a trip to the bay, where we observed 54.7 mpg. After the full week our average stood at 42.2 mpg, an impressive number only the BMW 328d could beat. 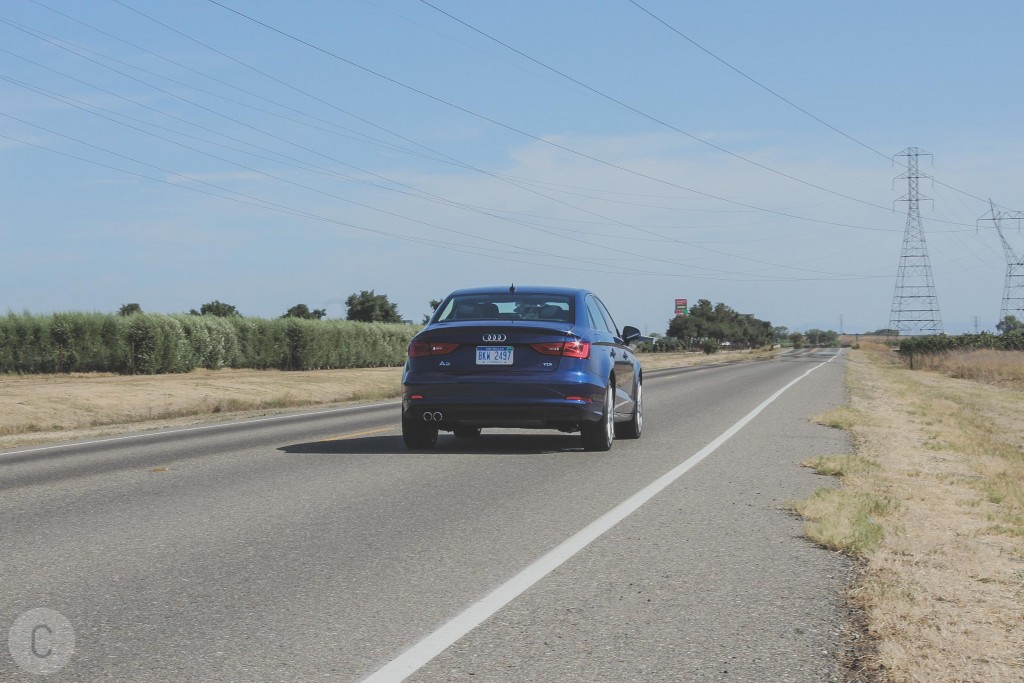 Our car was equipped with the 2.0L TDI clean diesel engine that pumped out 150 horsepower and 236 lb.-ft. of torque, supported by a 6-speed S tronic transmission. The sporty dual-clutch automatic transmission is smooth and reliable, though it tended to automatically lower gears in Manual mode, which could be annoying and guzzled more gas then we’d have liked. Also concerning was the lack of steering wheel paddles to control the gearbox when in Manual.

Nevertheless, it took sharp inclines and hilly roads like a champ. And it’s pretty quick for a diesel vehicle! The car moves from 0-60 mph in around 8.1 seconds, and handles tight corners with the grace of a butterfly and strength of a mountain lion, and grip is generous thanks to those hard-working Continental tires.

We tested the brakes during one particularly fun day and found the Electronic Stability Control with secondary brake assist worked so hard we never worried about collisions or spinning out of control. The Anti-Lock Brake system and disc brakes (ventilated front and solid rear) no doubt played their part in the A3s impressive stopping stats. Likewise, the electromechanic speed-sensitive steering wheel was intuitive and left me feeling comfortably in control of the sedan, even despite its lack of paddles. 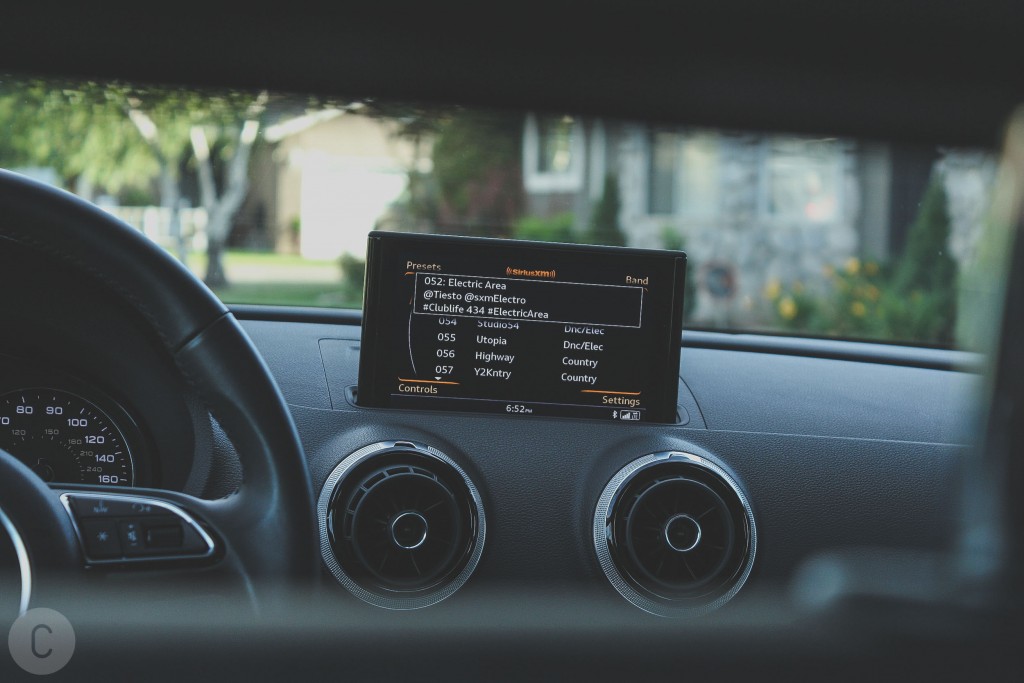 Whatever disappointment we felt at the car’s lack of paddles was more than made up for when we noticed the outstanding tech components, with Audi’s new MMI controller and pop-up 8.1-inch HD touchscreen receiving praise from all corners of the car community. More intelligent than any system we’ve used to date, the MMI Navigation plus package with voice control ($2,600) even saves photos from each location you’ve visited. Broadcasting crystal clear overhead views is just the beginning; this thing gives you 360-degree street views and magnification settings so you can see a piece of trash, or a car’s license plate number. Getting started is simple: just type in your destination, or scrawl it onto the screen – the system even recognized my dodgy handwriting – and you’re off!

Looking past its navigation prowess, a number of infotainment features also vie for attention, the most notable of which is the hands-free Bluetooth function. The Controller itself eliminates driver distraction by using a big rotary dial and four buttons, along with two toggle switches. In other words, it isn’t confusing; even your dinosaur – or your dad – could figure it out.

To compliment the Navigation and Driver Information systems, Audi gives drivers a bunch of options when it comes to music. There’s AM, FM and SIRIUS satellite radio with three-month complimentary subscription, as well as CD and aux inputs and an SD card reader. Bluetooth worked seamlessly, but USB users will be disappointed by the omission of USB port. However, a DVD player is included along with a 6-month subscription to Audi Connect with online services.

Audi has a strong safety record and our tester was packed-full of protective elements. In terms of airbags, the A3 Sedan TDI FWD S tronic is stacked! How do driver and front passenger advanced airbag supplemental restraint systems sound? Not enough? There’s also driver and front passenger knee airbags and seat-mounted thorax side airbags plus sideguard inflatable curtain airbags. In the seatbelt department, everybody on board is looked after with 3-point safety belts with Automatic Locking Retractor (ALR), automatic pre-tensioning and force limiters keeping them in place (the rear center seat receives a 3-point safety belt with ALR). LATCH restraints and child safety locks can be found in the rear, and if you are carrying precious cargo in the back (human or otherwise) you can rest assured the anti-theft vehicle alarm system will keep would-be thieves at bay.

The new A3 TDI retails for $32,600, but with the inclusion of all those extras, our tester was invoiced for $39,195. For that price, and considering its fuel efficiency, only a small group of competitors can be found on American shores, though none are diesel-powered. The Lexus hybrid, the CT 200h, is obviously Audi’s closest rival, with a practical nature and smaller price tag. But it ultimately comes in second due to slower speeds and less lively acceleration. The BMW i3 electric vehicle enters the race with a gorgeous body but again fails to keep up with the A3s performance and handling.

We loved the speed of the TDI FWD S tronic, and it’s significantly quicker then most of the competition. The engine is efficient and the interior was luxurious without being ostentatious.

We didn’t love the limited rear legroom, and road noise was an issue, but our biggest complaint would be that the car isn’t actually as ‘clean’ as advertised. Sure, it’s 2015 and we’ve been around the block enough times to know that what’s advertised and what you actually get are often light-years apart, but from a prestigious carmaker like Audi, we expected a little more.

Written By
Victor Mosqueda
More from Victor Mosqueda
The guys over at Bad Bowtie Productions decided to pit the 2014...
Read More
0 replies on “2015 Audi A3 TDI FWD S tronic”