There’s a new crossover on the scene!

Dear old Abraham Lincoln would be pleased as punch to have his moniker adorning the new 2015 Lincoln MKC 2.3-liter EcoBoost AWD. Well, we can only assume he would, and since he’s not alive to argue otherwise, we’ll take it as fact that the 2015 model is a car he would have driven had he been given the chance.

The MKC is Lincoln’s version of a compact premium crossover vehicle. First launched back in 2013, it didn’t go on sale until June of the following year as the 2015 model. Despite it’s infancy, the relatively new player in the crossover market has made quite a name for itself in a short period of time. Taking cues from Ford’s Global C Platform, the MKC enjoys refined versions of some internal components first seen in the second-generation MKZ. So, without further ado, let’s get behind the wheel and see what the MKC AWD has to offer. 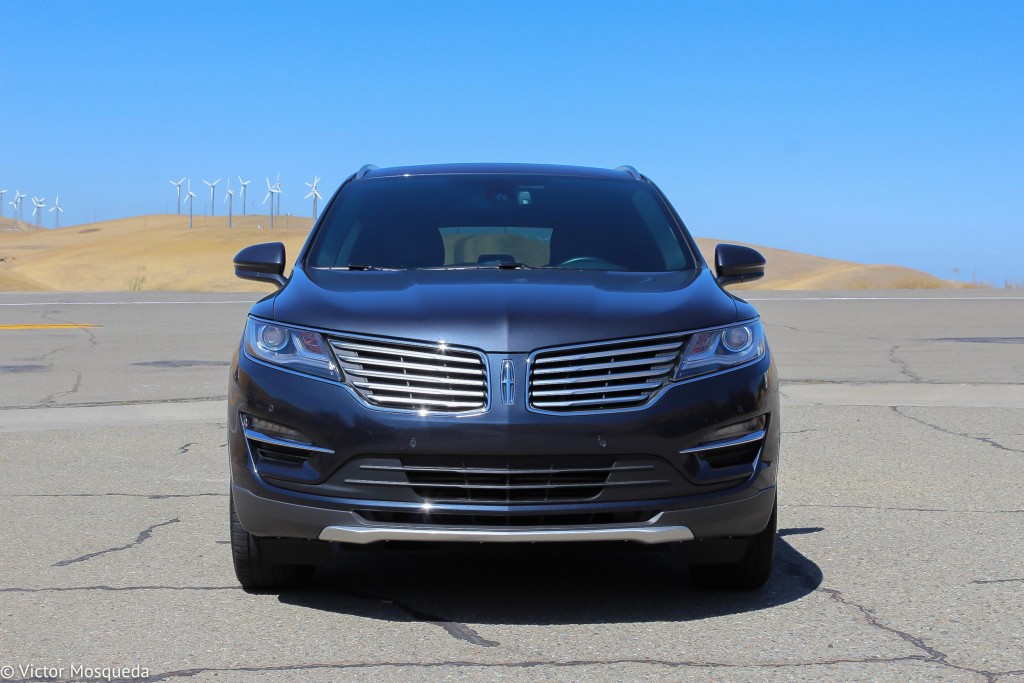 ‘Graceful athleticism’ was the design theme for the car’s exterior, and standing on 19-inch 5-spoke premium Luster Nickel-painted aluminum wheels ($395), it’s not hard to understand why. Like a smokey-eyed femme fatale, our tester came in sexy Smoked Quartz Metallic Tinted Clearcoat ($495).

Despite taking inspiration from the Ford Escape, you’d never guess from looking at the sleek beast. In fact, the sheetmetal and roofline on the MKC are different, and it sits an inch lower and features a more prominent downward taper and higher, more bodacious beltline. Additionally, the Lincoln split-wing grille and unique clamshell-style tailgate aid the vehicle in standing out from the pack (and it’s a big pack!)

With this never-ending summer we’ve experienced on the West coast (and most parts of the country) this year, it’s hard to imagine having to use the heated power mirrors (with memory and security approach lamps), though it is a handy feature nonetheless.

Useful no matter the temperature are HID headlamps, LED taillamps, easy fuel capless filler and configurable daytime running lamps. The hands free liftgate was a nice finishing touch, and got a workout during our week with the MKC. 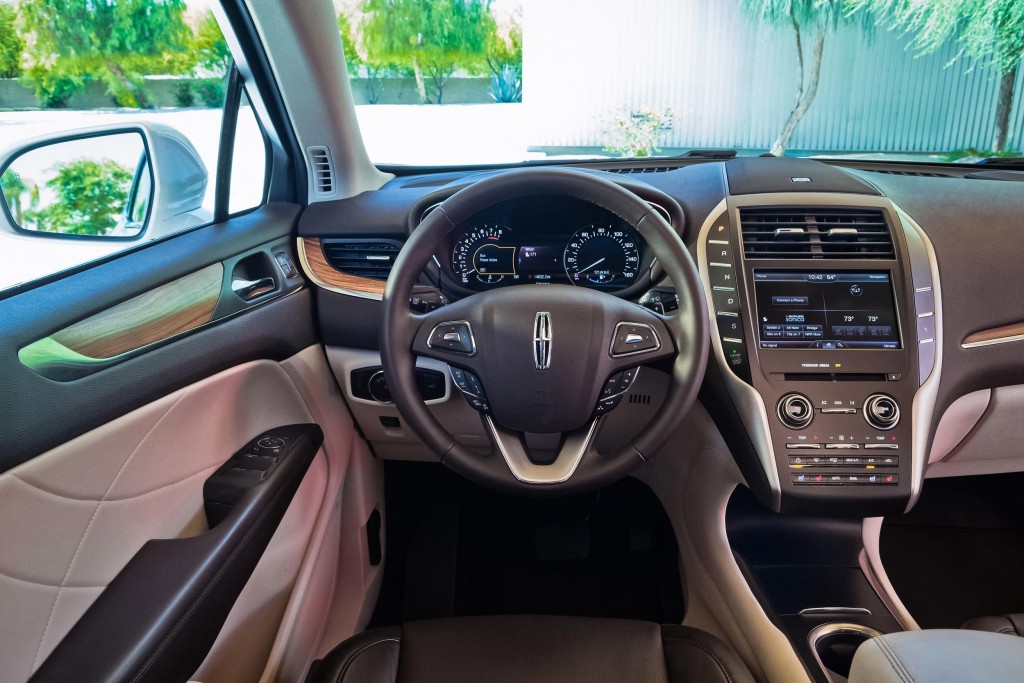 Complimenting the alluring exterior, the fancily named ‘Elegant Artistry’ interior was dressed to impress in an Ebony premium leather trim fitout. It’s obvious the designers pondered long and hard over the luxurious elements that contrast beautifully.

Buttons and controls are ergonomic and borrow the design principles prevalent throughout Scandinavia. Indeed, the whole cabin projects a serene atmosphere; equal parts minimalist and multi-faceted, it was a pleasure to cruise around in.

The breezy, uncluttered nature of the curvy cabin is accentuated by an enormous panoramic vista roof that sheds light on almost every nook and cranny. The result is a comfortable, airy experience we wouldn’t mind holding on to. The heated and leather-wrapped steering wheel for example, which is part of the $580 Climate Package, enjoys cruise control accessibility and audio controls. In fact, it almost felt like the steering wheel was moulded specifically for me and my slightly knobbly knuckles. The front seats also receive heating, while the driver can make use of the seat’s 10-way memory setting with lumbar support.

The dignified downward-sloping dash was one of our favourite aesthetic features, and gave way to a center stack so intelligent it’s edges can be manoeuvred forward or outward as desired.

Comfort and serenity continues in the back with 60/40 fold flat split bench seats, complete with reclining capabilities. Speaking from experience, the back seats’ ability to recline was incredibly beneficial when hauling kids around on long-ish trips.

As if the power mirrors and a gigantic vista roof weren’t enough, the good people at Lincoln have also endowed the 2015 MKC AWD with dual-zone electronic auto climate control. 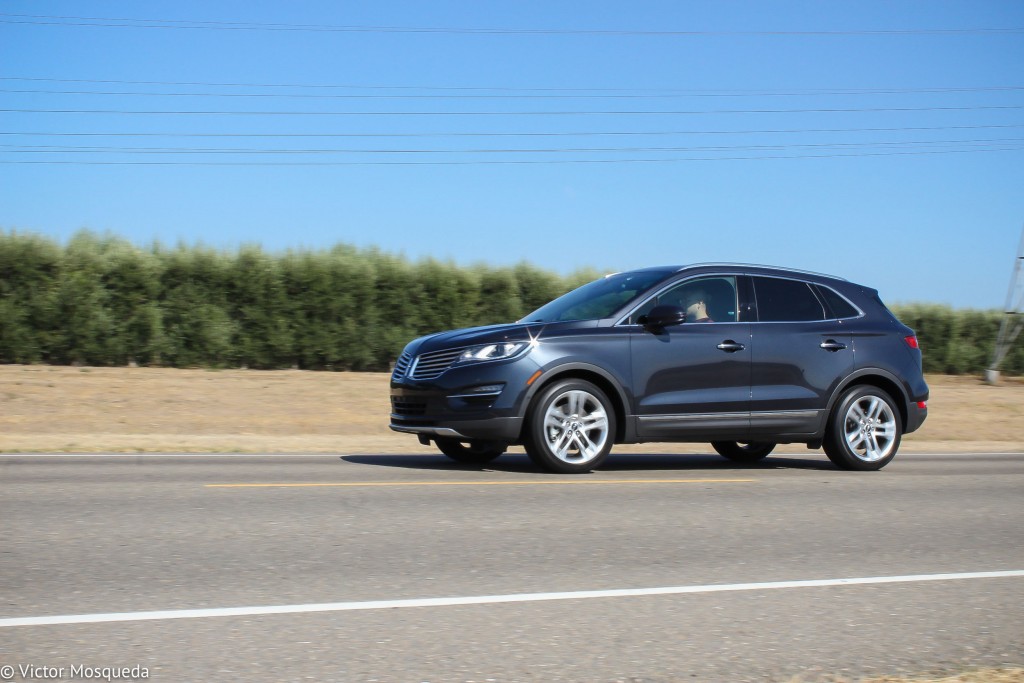 The 2015 Lincoln MKC AWD won’t exactly have environmental crusaders offering applause, but it won’t see them picketing at Lincoln’s gates either. The EPA has reviewed the numbers to come up with an average of 18 mpg in the city and 26 mpg on the highway for a combined 21-mpg. After our week with the Lincoln we observed an average of 18.7 mpg. 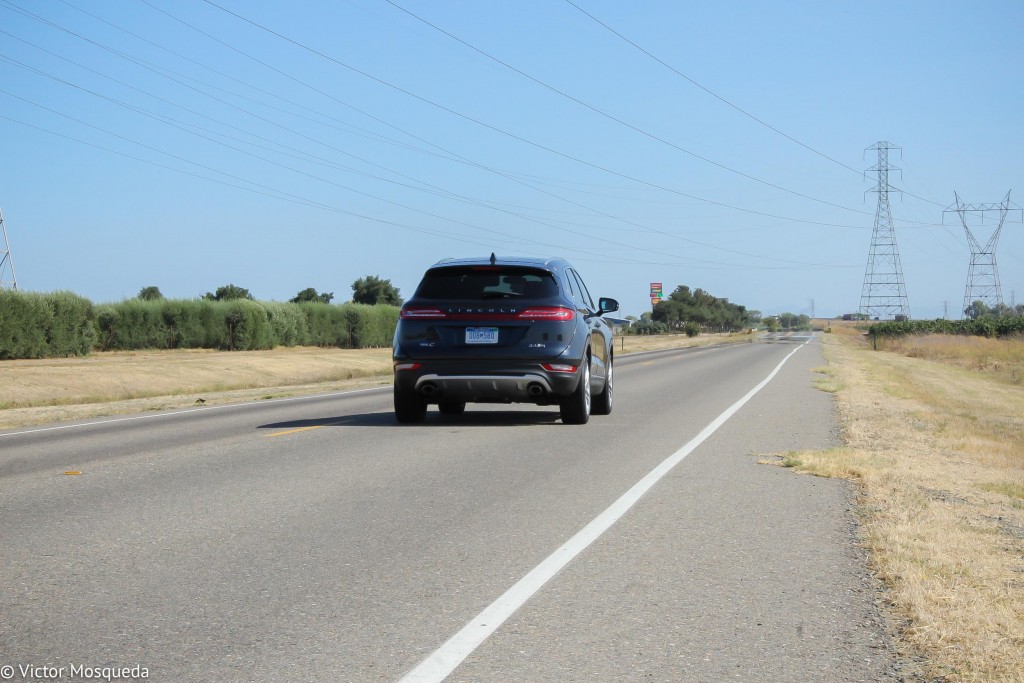 Our AWD model Lincoln MKC was equipped with a 2.3L EcoBoost engine ($1,140) with 6-speed select shift auto transmission good for 285 horsepower and 305 lb.-ft. of torque. Adopted from the new Mustang engine, the MKCs version doesn’t quite match the Mustang’s grunt (310 horsepower and 320 lb.-ft. of torque), likely due to the 6-speed automatic transmission. Nevertheless, the car still moves from 0-60-mph in a respectable 6.6 seconds, a number likely helped along by the crossover’s modest waistline. Weighing just 3,989-pounds, the MKC is lighter than much of the competition.

High on the list of over-achieving functions were the electric power assist steering, reverse sensing system and transmission-select shift. On the topic of transmission-select, I was blown away by how simple it was to access the shift buttons. Located on the left-hand side of the center stack and spanning its length, access is convenient and the large buttons make wrong selections a non-issue.

The 6-speed transmission was fitted with active dampers, a feature I found particular interesting, especially considering many competing vehicle lack the inclusion of active dampers. As a result, the suspension is sharp and doesn’t waste time delivering results. Together with springs, the handling we experienced was outstanding, and even a camping trip over less than ideal terrain failed to ruffle the Lincoln’s feathers, let alone shake its cabin.

Traction control and hill start assist functions also came in handy when attempting to reach the campsite, which was located at the top of a steep and rocky incline. Coupled with an anti-lock braking system and AdvanceTrac with roll stability control (AdvanceTrac assists by applying the brakes when a slip is detected) I felt secure in the fact that myself and my precious cargo – not to mention the car itself – would reach our endpoint safely.

Back on city streets, I drove with the suspension in comfort mode and experienced some of the smoothest driving I’ve had in a crossover. Sport mode was understandably the most exhilarating, but still velvety smooth thanks to those springs and dampers.

The engine unit posts the same dimensions as the base 2L engine and the cradle it sits in remains unchanged from the Escape. Surprisingly though, the 2L engine-equipped version can tow 1,000 pounds more weight than our 2.3L. 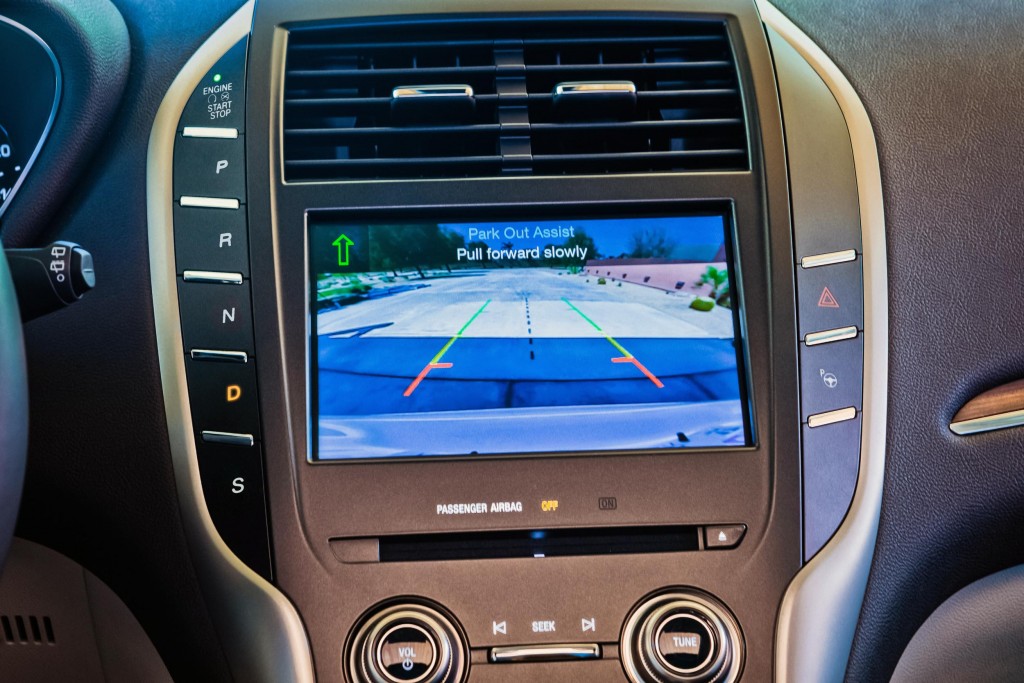 Overall, we were generally pleased with the tech components found in this car. The navigation with voice recognition worked well, as did push button shift and remote start features, and active noise control added to the cabin’s sense of calm.

Some critics have slammed the MyLincoln Touch for its tendency to crash, but we didn’t experience any of that. Rather, our encounter revealed the merits of the system and I’d go as far as suggesting it’s one of the best and least complicated systems available today. Not to mention the generously-sized touch screen. Complimenting MyLincoln was the $995 Enhanced THX audio sound system that worked in harmony with Sirius Satellite radio and the single CD input and HD radio.

Our car was equipped with the $2,235 technology package that included safety favorites like adaptive park assist, adaptive cruise control with collision warning (came in handy on our long drive to the camp site) and forward sensing system, among others.

The airbag headcount is impressive: there’s the side impact curtain airbags, driver’s knee and dual stage front airbags. If that didn’t leave us feeling secure enough, the passive antitheft and perimeter antitheft systems certainly did. Likewise, the SOS post crash system thankfully wasn’t implemented but knowing it was there is always a comfort.

The SecuriLock was a personal favorite. All I had to do was input the passcode and access was granted – sans keys! I don’t know about you, but I misplace my keys at least once a day, so this would no doubt be useful for many scatterbrains or forgetful souls.

The car’s handsome stance was the first thing we noticed about the MKC AWD, and this is a crossover you would be happy to be seen rolling around in. The steering and handling is exquisite, and the high-end, Scandinavian-inspired cabin was both quiet and comfy (even on the highway). Oh, and who can forget that gorgeous vista roof?

Despite the comfort and smooth handling, the overall drive experience was somewhat uninspiring. We were hoping for sport luxury on all fronts, not just on a material level. Sure, the cabin is visually stunning, but the elements themselves fail to match competitors from Lexus and Audi. Cargo capacity is another drawback, and could be described as modest at best.

We had a great time during our week with the MKC, although we were aware that it had entered a well-established crossover market with heavyweights hard to beat. From an economic standpoint, the MKC outperforms the (larger) Cadillac SRX when comparing fuel economy. Competitor-in-waiting, the new and unreleased BMW X1 is sure to be a serious AWD crossover competitor.

We’d also suggest the Infiniti QX50 as a suitable alternative to the MKC. With RWD layout and a sportier demeanour, the QX50 is almost as desirable as the safe and comfortable Volvo XC60.

The Audi Q5 is another option to consider, and boasts a more lucrative reputation and user-friendly MMI setup.

Written By
Angel Mosqueda
More from Angel Mosqueda
There’s something to be said about Acura being in its bag. It’s...
Read More
0 replies on “2015 Lincoln MKC 2.3-liter EcoBoost AWD”