Without the ‘Eco’ or the ‘Boost’

At first glance, the term EcoBoost is an obvious oxymoron. For whatever reason, Ford have tried in earnest to turn their turbocharged, small-displacement engines into a serious alternative to bulky, naturally-aspirated mainstream models. The promise of super-efficient fuel consumption and uninterrupted power has once again fallen short with the 2015 Ford Mustang Convertible 2.3-liter EcoBoost.

First imagined by Ford designers in 2009 in an attempt to bring the car into the future and celebrate Mustang’s 50th anniversary, the EcoBoost was welcomed with skepticism by many who wondered why Ford would tamper with an icon. All the quintessential Mustang elements were included in the original design, like the long hood, short deck and shark-front nose.

By 2015 the design was complete, and featured a long-sculpted hood and forward-leaning nose. With the widened rear track, unified side glass (rather than the front and rear bumper shelves) and a hidden B-pillar, the modern sixth generation Ford Mustang was born. The convertible was soon conceived and enjoys new bodywork while maintaining the ‘Mustang’ vibe. A recontoured trunk lid and higher, straighter lines at the rear are just the start.

On your marks, get set, go Competition Orange! The rich shade of our tester was a thing of beauty and made the car look a lot faster and more powerful than it was. Perched atop 18-inch machined aluminum wheels, the Mustang Convertible with black cloth roof reveals the designers’ focus on forward thinking and innovation, not to mention their love of LED. Up front there’s HID projector headlamps, auto headlamps and LED fog lamps.

If you look a little closer, three gills can be spotted inside the HID headlamps; these pay homage to the original Mustang and its headlamp bucket mounted gills. The LED love-fest continues out back with LED tail lamps and sequential turn signal. Our favorite lighting feature was the indirect LED lights that highlight the blade style tri-bar taillamps. What’s more, the rear-end was treated to a beefy dual exhaust system, bright exhaust tips, and rear spoiler and diffuser. The manual folding dual power and heated mirrors with turn signals are nothing to sneeze at either, with integrated spotters and sleek lines.

Our Ebony leather grain interior was perfectly offset by the bright exterior paint and the designers’ must be commended for their sense of continuity and harmony of materials and components. Inspired by an aeroplane wing, the team devised a long aluminum wing spanning the width of the vehicle from door to door. The resulting shallow dash is much improved from the outgoing Mustang, whose big and burdensome instrument panel lacked functional elegance.

Instead, the sixth generation sees gauges, toggle switches and registers sit inside the double brow carved out of the wing, leaving drivers feeling more like pilots. Pilots control the symmetrical, driver-oriented helm from their leather-trimmed 6-way heated and cooled power driver’s seat, and navigate the roads using a slimmed down shifter and tilt/telescopic steering column with cruise control.

To assist the streamlined look a knee airbag was cleverly installed in the glove-box door enabling the dash to be slimmed down by almost four inches, leading to a more palatial cabin, and the most luxurious Mustang has sported to date. The whole airbag system has been overhauled, and the new design improves impact protection while reducing the space and weight of the airbags. In fact, the 2015 Mustang Convertible houses double the airbags as the fastback incarnation.

Our Ebony interior came with the $395 Premier Trim, which included color accents and intuitive ambient lighting. Ford designers have considered passenger comfort too, installing a plush center console with armrest and premium sound system that combines AM/FM radio, CD/MP3 input, satellite cable and audio input jack. Oh, plus they can stretch out in comfort thanks to that hidden knee airbag. 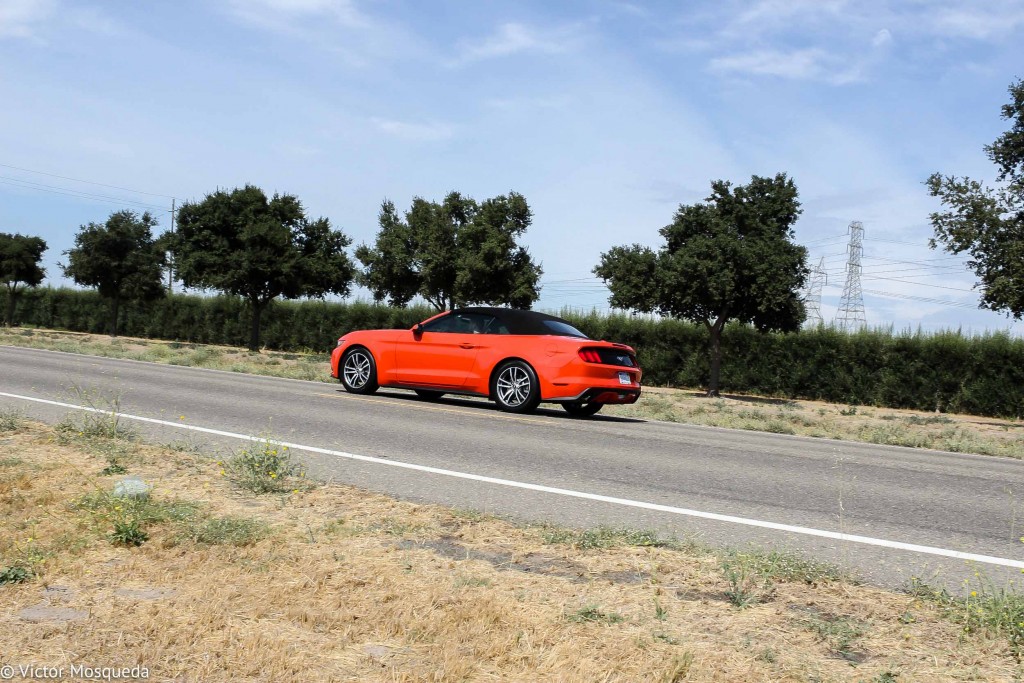 The EPA have crunched the numbers and found the 2015 Ford Mustang Convertible capable of 20 mpg in the city, 30 mpg on the highway, and 24 mpg combined. I spent a week with the Competition Orange convertible and recorded an average closer to 23.1 mpg. I wasn’t overly impressed with this figure, especially considering the car’s ‘Eco’ moniker. 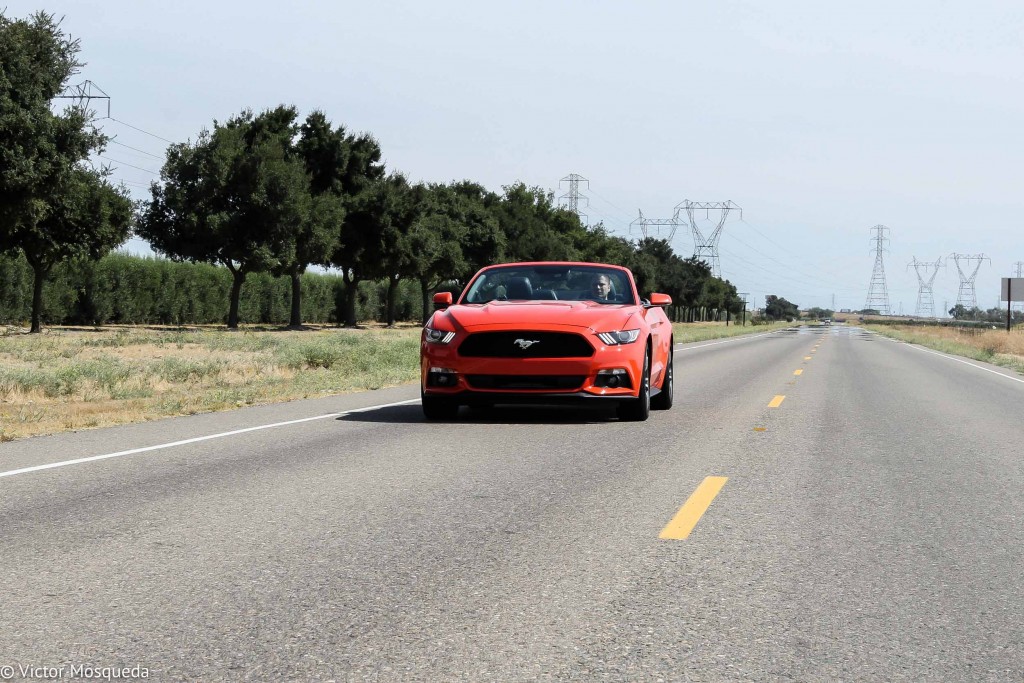 Ford’s EcoBoost fleet has a tendency to provide either more efficient fuel economy or greater power. One or the other, but never both – and luckily, never neither. Unfortunately, the latter has become a reality with the new Mustang’s 2.3-liter I4 engine. As we’ve just seen, the EPA stats and achieved averages aren’t convincing, and the twin independent variable camshaft that produces 310 horsepower at 5,500 rpm and 320 lb.-ft. of torque are almost as disappointing.

Our car was equipped with the 6-speed select shift automatic transmission ($1,195), but still only managed a 0-60 mph time of just over 6 seconds, and the horsepower never feels as powerful as its projected numbers. To put this in perspective, the Volkswagen GTI we tested last week covered the 0-60 sprint in 5.9 seconds. Our advice is to keep the gear in the S position to attain sharper shifting.

The throttle feels lazy, as if sighing every time you put the pedal to the floor, and the turbo note is a little obnoxious. I mean, it really has no right to make such a racket if it doesn’t back it up with some power and grunt. And it doesn’t! 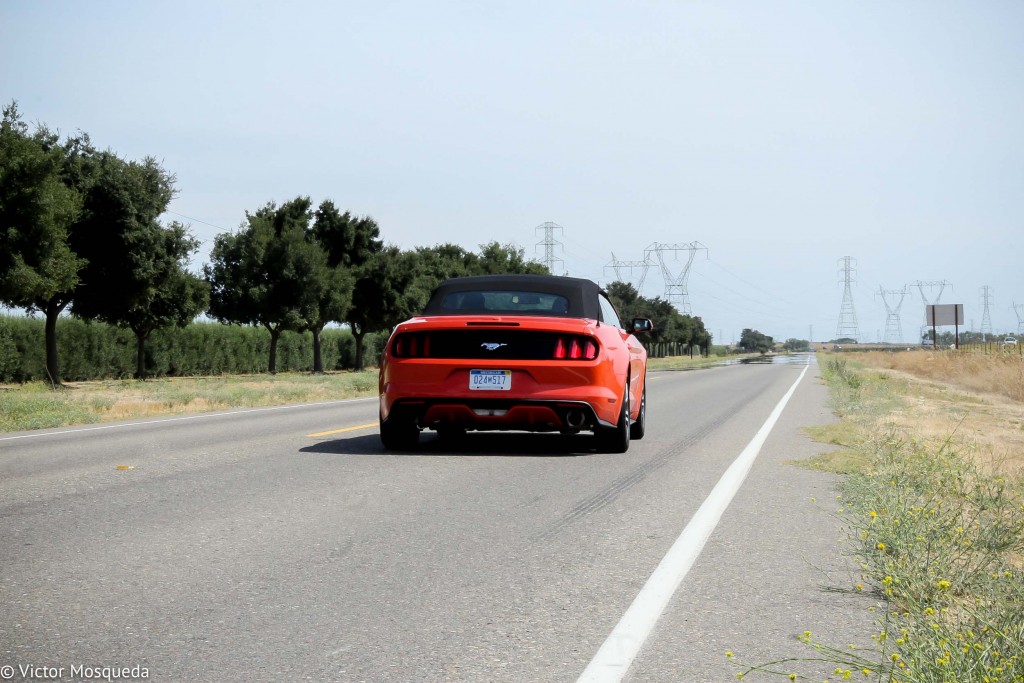 Anyone reading this and thinking, ‘I’ll just ditch the EcoBoost engine in favor of the reliable V-6,’ should keep in mind that the V-6 versions are cheaper and lack mod cons like heated seats and navigation. At the other end of the engine spectrum, the V-8 models are more expensive (no surprise there), and often more powerful than the everyday driver will be looking for.

Dry your eyes and take a deep breath because it isn’t all bad. The electrically assisted steering wheel lends the car some of the finest and most accurate turning I’ve experienced. Meanwhile, the brakes are adept at bringing the wheels to a stop from 70 mph in 152 feet.  Additionally, the three selectable driver setting are user-friendly and dynamic, but we still cant help tapping our feet in anticipation of the tweaked version to be rolled out in the coming months (if you just bought the Mustang Convertible, don’t worry, the software overhauls are covered under warranty). 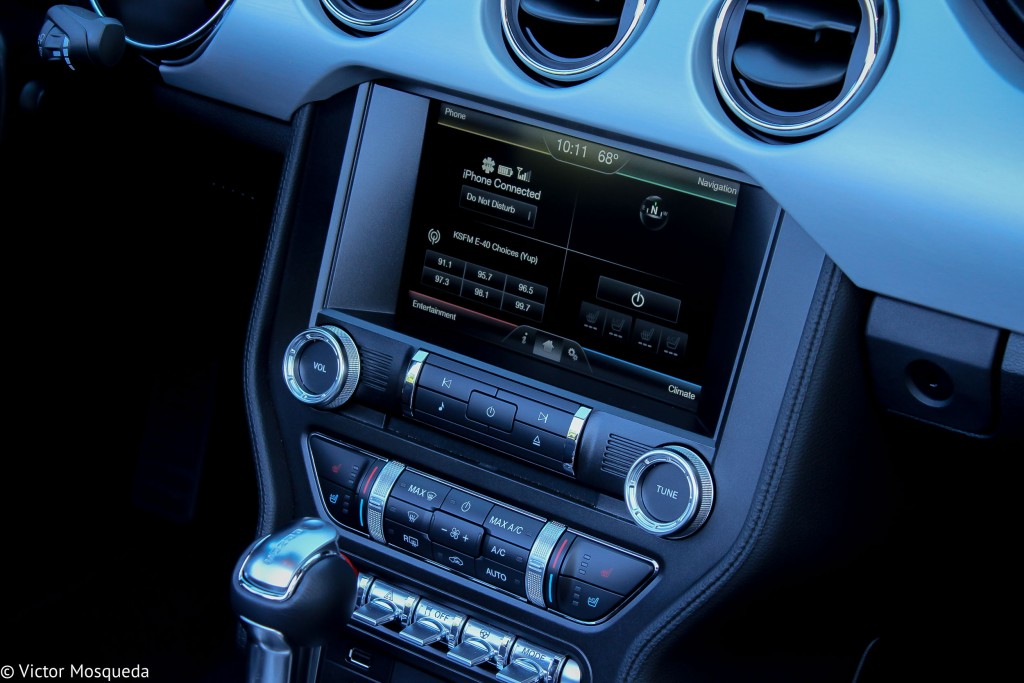 The performance features may have left us underwhelmed, the tech outfit is the type of thing that would make Inspector Gadget excited. Clever little details, like the SOS Post Crash Alert System and Perimeter Alarm, can be found in almost every corner of the cabin. You’ve got the LATCH child safety system to keep the kiddies carefully cushioned and dual-zone electronic auto climate control to keep everybody comfortable.

The aforementioned $1,195 Adaptive Cruise Control (with forward collision warning and brake support) is worth the expense, and you’ll understand why when driving through heavy traffic. The system identifies sluggish conditions and slows the car down based on pre-set distance.

We were also blessed with the Voice-Activated Navigation system (with superb voice recognition), that will set you back an extra $795, but includes a 5-year subscription to SiriusXM Traffic and Traffic link (none of this one-year subscription business!).

A road trip down the coast midweek saw the system get a workout. The combination of GPS and 3D-mapping meant directions were always precise, and upcoming traffic alerts and gas station pins are a handy touch. Siri seamless integration was just that: seamless.

Despite not being equipped with Wi-Fi, the Tracks Apps feature was a great inclusion, though it doesn’t come with the GTs Electronic Line-Lock (which keeps front brakes locked while in gear) and Launch control (which enables smooth starts via the brakes, traction control and powertrain) to immediately reveal performance stats on the 4.2-inch touch (and swipe) screen. The screen itself can be accessed from the steering wheel-mounted five-way button. I loved checking the Accelerometer, which shows g-forces, acceleration times and automatic/countdown starts. If only the engine performed better, it would be fantastic to check top times and lap results as well as brake performance and saved stats.

Taking things even further, Ford included AdvanceTrac with ESC, which roars into action during adverse weather conditions and slippery roads. Reverse park assist added an extra $295 to the car’s value, though I think this should be included in all modern cars as a standard feature.

Some standard features you’d expect are power windows, locks and mirrors, and remote keyless entry and push button start. Not so standard is the MyKey technology. A close friend who has a son learning to drive observed that MyKey’s ability to encourage good driving through the prerequisite use of seat belts and restricting top speeds, audio outputs and driving modes, was a brilliant tool of learner-drivers.

Starting at $34,800, our ostentatious orange Mustang was valued at $41,295. How does this compare to the competition, we hear you ask? First up there’s the Chevrolet Camaro, with more aggressive styling and zest off the mark. However, the Mustang takes the lead when analyzing execution and overall driving performance.

Next we have the Dodge Challenger; a car we had the privilege of driving last month. Superior in almost every aspect – from space to practicality and everything in between –the muscle car even boasts plusher interiors for a more comfortable, and animated, ride. However, its hefty curb weight and size have a tendency to slow the beast down, and the Mustang outperforms the Dodge on the open road.

If you simply cant wait for the improved engine later this year and need a high-performing topless Mustang now, you’ll have to and fork out a minimum of $42,700 to get into a V-8–powered GT droptop.

Love it:
Despite our moaning about the EcoBoost’s lack of spirit, I couldn’t help admiring the car’s handling and ride dynamics, no matter the Drive Mode selected.

Redesigned to perfection, the stunning convertible’s exterior blew me away with its Competition Orange paint job and refined interior (the wing dash is particularly memorable).

Leave it:
Unfortunately, EcoBoost fails to deliver either fuel economy or enhanced power. Acceleration is lethargic rather than urgent, and the cramped seating became uncomfortable for rear passengers over long distances.