Sometimes, the best kept secrets demand public attention and the Golf GTI is a perfect example. Developed in the early ‘70s under strict hush-hush conditions by some of Volkswagen’s most innovative engineers, the GTI was let loose in 1976. Immediately gaining icon status, the model was test engineer Alfons Lowenberg’s vision of a beefed up but lightweight hatchback.

Borrowing design elements from Scirocco chassis, the inaugural Mk1 GTI sold 5,000 units in less than 12 months. Fitted with a 1.6L naturally aspirated 4-cylinder engine and fuel injection unit, the original GTI was the quickest VW produced at the time.

The second generation was rolled out in 1984, and came with a 1.8L engine. By 1991, the third generation GTI engine capacity was elevated to 2-liters and the curb weight was significantly heftier.

Since then, a diesel model was released, turbocharged engines were enlisted and tech upgrades became market leading and the latest incarnation of the Seventh Generation is a testament to the reputation of the legendary GTI.

The 2015 Volkswagen Golf GTI SE that arrived at our doorstep was splashed with classic Tornado Red paint. The superficial alterations made to the Seventh Generation aren’t obvious, but they’re effective in raising the hatchback’s sporty profile. Over 2-inches longer, half an inch wider, and 1.1-inches closer to the pavement, the engineering team haven’t tried too hard, but what they have done is subtly enhance aerodynamics (coefficient of drag sits at 0.31). The lower center of gravity draws the eye to understated side skirts and 18-inch alloy wheels with Bridgestone Summer Performance tires. Less understated were the fake air vents, roof spoiler and power panoramic sunroof, which give the car a sporty profile.

The C-pillar and roofline remain quintessentially GTI, but the front end receives a facelift in the form of new headlight clusters (including LED fog lights and automatic headlights) and a slender mesh-patterned grille, which welcomes character lines stretching the length of the car and ending at the taillights. A number of these lines can be spotted on the car’s exterior (the horizontal strip above the grille is one example) and they lend the car a seamless and sophisticated look. 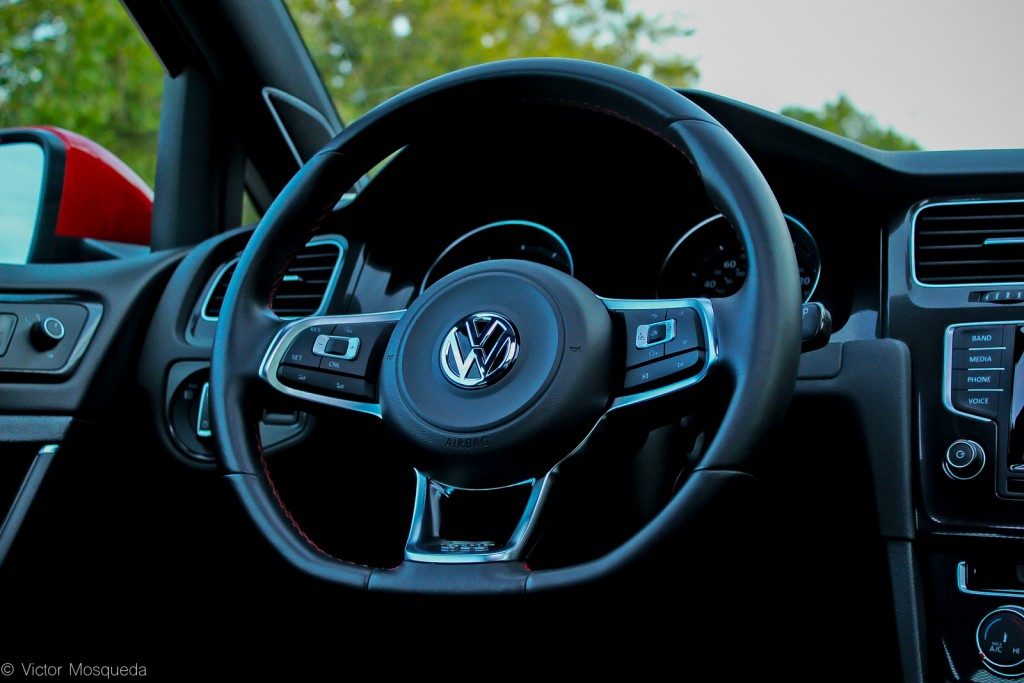 The new GTIs roomier cabin is lush! The design team have outdone themselves with a plethora of quality materials to create a tactile haven. Our tester’s 93.5 cubic foot interior was fitted with Titan Black leather accents and lashings of red stitching. The crimson needlework is in good company; with awesome red ambient lighting and illuminated doorsill scuff plates setting the mood for a red-hot ride.

Additionally, some of the buttons and knobs are illuminated in white. And as if that weren’t enough, I was surprised when my brother turned on the LED reading lights, not only because I’m in awe of anybody who can read at high speed, but because this is a feature I haven’t seen in many other cars.

The trunk is also bigger (15% larger than the outgoing model), and features a clever moving floor that can be raised to create more space. I was helping a friend move last week, and the rear 60/40 seats that fold down flat were indispensable when hauling furniture.

The cockpit is user-friendly to the extreme, with engineers altering the position of numerous controls and optimizing pedal placement. Even the center stack tilts towards the driver and the adjustable side mirrors with side turn indicators were sensitive without being too delicate. The GTI instrument cluster adds to the sporty undertones and compliments the 5.8-inch Infotainment touch screen perfectly.

Leather adorns much of the cockpit: from the flat-bottomed multifunction sport steering wheel with GTI logo and cruise control switches, to the shift knob and brake lever. But the loveliest leather components are the heated sport front seats with manual lumbar support.

Volkswagen doesn’t skimp on safety features. Side curtain protection head impact airbags in the front and back are joined by side impact protection door beams for complete protection during all driving scenarios.

There’s a lot to like about this car, but when you see the EPA numbers you’ll be frothing at the mouth. I was certainly impressed when I recorded an average of 26 mpg after a week of driving. That number is just 2 below the EPAs 28 mpg combined average (25 mpg in the city and 34 mpg on the highway are expected).

Powering the sporty new GTI is a 2.0L TSI turbocharged in-line 4-cylinder engine with direct injection. The engine is good for 210 horsepower at 4,500 rpm (if fitted with the Performance Package the car gets to 220 horsepower), which is 10 hp more than the Sixth Generation. Torque has massively increased, too, and the car is now capable of 258 lb.-ft. of torque (51 lb.-ft. more than the Mk6). The 6-speed manual transmission generally performed well, but gearshifts tended to lag.

Driving Mode Selection welcomes Normal, Sport, Individual and Comfort modes. My brother loved the Comfort mode, and its adaptive damping system works admirably. My favorites, on the other hand, were the Sport and Individual modes. The ability to alter the steering and throttle while activating Individual settings makes it the ultimate winner.

Limited Slip Differential is right on the money and even the trickiest corners didn’t pose an obstacle. The car’s lower stance and electro-mechanical power steering meant we always felt safely planted on the ground despite hitting the pedal hard. Acceleration was consistent and zippy, and the car tackles high speeds with more confidence than the outgoing model. What hasn’t changed is the precise and smooth ride of the GTI and its pristine presence on the highway where wind noise and interference are almost non-existent. Indeed, the exhaust could be described as restrained – even in Sport mode.

Driving through the city at rush hour didn’t leave me wanting to throttle fellow drivers, so that’s a bonus. Instead, the GTI changed lanes without a hitch and cruised uninterrupted over bumpy sections of road. It’s solid presence and calm cabin made it a pleasure to drive. 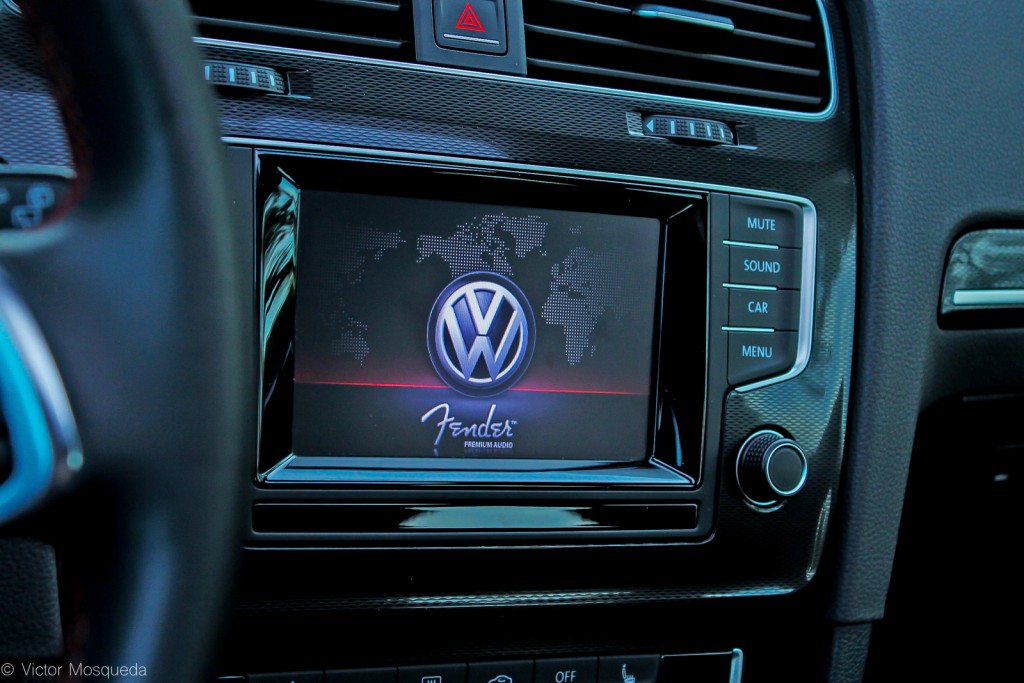 Overall, the tech inclusions are great, but the 5.8-inch Media Device Interface (MDI) connection – which ditches the USB port (why, Volkswagen, why?!) – was often irritating. We expected to be swiping like Tinder pros and pinch-zooming in on Maps like a microscope, but unfortunately the mechanics don’t live up to the hype. The proximity sensor is a little snap-happy and was activated accidently countless times by myself and whoever was riding shotgun.

iPod and iPhone connectivity are still here, but to play a CD or access files on an SD card, you have to insert them into slots in the glovebox. Not only is this kind of dangerous to attempt while in motion, it’ll also be annoying for anyone with short arms and no front passenger. In that case, stick to listening to the radio (AM/FM and SiriusXM Satellite radio) or mobile Apps. Looking past this slight inconvenience, the Fender 400-watt Premium Audio System does a fine job at sending airwaves through the cabin with eight speakers and a subwoofer.

The car’s safety features are more impressive than its entertainment settings. First there’s the Climatic single-zone manual climate control. With fires blazing up north last week, the fancy-sounding system kept us cool during our test drive.

Our tester didn’t come with the all the added extras available , but it did have the important essentials such as driver and front passenger airbags (front and side) and 3-point safety belts for all. The seatbelts were more comfortable than most and the LATCH system was so easy to use I got the nieces and nephews in and out without a problem, while side impact protection door beams gave the cabin extra padding against collisions.

Together with the Electronic Brake Force Distribution and Differential Lock, I wouldn’t have been able to hit an ant let alone a car. Other noteworthy inclusions are the Anti-Lock Braking System (ABS), antilock disc brakes and automatic hill-hold, which would be a lifesaver for San Franciscans or anyone in a geographically steep locale. Meanwhile, the stability and traction control is useful no matter the terrain. The Electronic Stability Control was smooth and a XDS Cross Differential System made handling pretty damn sharp.

On a purely aesthetic level, the awesome wheels, fake air vents, black sunroof and sleek lines are irresistible. Fused with the plush interior – from its unique steering wheel with GTI logo and premium leather seats, to the red stitching found throughout the cabin – the car is definitely value for money. In terms of performance, the handling through corners is unreal and the Sport mode produced more grunt than expected.

The problematic MDI connection can be annoying, as can the slight turbo lag, and sure, the GTI might cost more than the competition, but when you look at some of the opponents it’s clear the GTI trumps the lot as a cost-effective premium package.

In not hard to see why those in the know tout the Ford Focus ST as the GTIs closest rival. Slightly cheaper, and slightly more powerful, the Volkswagen is still our pick of the pair thanks to its luxurious interiors and stylish interior. The trims are relatively cheap compared to other manufacturers, so even if you decide to get all the bells and whistles the GTI still isn’t too hard on the budget. Plus, the Focus doesn’t come close to matching the performance and handing of the Volkswagen.

Ford aren’t giving up without a fight though, and the Fiesta ST is around $3,000 cheaper but again fails to deliver the refined performance of the GTI.

Likewise, the ostentatious Subaru WRX is a good alternative but lacks the maturity and prestige of the GTI.

For the price and power, the Volkswagen is a smart and exhilarating choice.

Written By
Victor Mosqueda
More from Victor Mosqueda
A 1962/63 Ferrari 250 GT0 Berlinetta has been sold for a record-breaking...
Read More
0 replies on “2015 Volkswagen Golf GTI SE”