A MINI fit for a Maverick

Something little (pun intended) arrived in our garage last week; the 2015 4-door MINI Cooper S with hardtop. But listen up MINI-haters: this thing is specious, and represents where MINI is headed with its larger fleet of cars.

First peeking its boxy head around bends in 1959, the British mini-car delighted drivers with a transverse-mounted engine, unrivalled fuel-efficiency and distinguishable styling. A touch of tight handling and the ability to park in a space as small as a shoebox, led to the MINIs popularity in the US throughout the swinging ‘60s.

When the MINI remerged in 2002 after a short hiatus, it was under the guidance of luxury carmaker BMW, who revived the legacy of the legend by improving the car’s comfort and performance stats.

Three generations later and the MINI is equipped with two extra doors. So, wipe those MINI misconceptions from your mind, dispel any derogatory Mr Bean memes and wrap your head around the 2015 MINI Cooper S Hardtop 4 door.

Adopting the ‘work smart, not hard’ maxim, MINI took their 2-door hatchback and lengthened it to accommodate two extra entry points and significantly more rear space. One aspect that has remained unchanged, however, is the classic MINI styling that made me feel like a funk lord who misplaced his bellbottoms. The extra doors do nothing to detract from the iconic appearance, and convenient parking in tight spots is still possible. The only difference is that the 4-door package is a lot more functional.

Our tester was swathed in an Electric Blue metallic paint job with black bonnet stripes on the signature MINI hardtop and matching mirror caps. Bestowed with the Sport Package, we enjoyed 18-inch MINI Yours Vanity Spoke wheels ($750) as opposed to the standard 16-inch, LED fog lights, LED headlights ($250) and white turn-signal lights.

As the first wholly redesigned MINI since 2007, the generous dimensions are so cleverly engineered that most observers will struggle to perceive a difference.

But take a closer look, and you’ll find of a few features that are set to become standard on 10 upcoming MINIs. Most noticeable is a longer nose and larger taillights, but overall the exterior is unequivocally MINI, with funky front fender oval headlights and curved rectangular grille outlined in chrome.

MINI are quick to point out the interior of the new model is not pretentious. Rather, it looks and feels like a premium vehicle without trying too hard, as evidenced in our Leatherette Carbon Black interior. Endowed with the Premium Package, it was like nothing we’ve sat in before, and reminded us of a fighter jet with its illuminated toggle ignition and dashboard switches, which were bookended by a couple of eyeball vents. The sizeable tachometer keeps a smaller speedometer company, while the automatic dual zone climate control rotary knobs are as intuitive as they are attractive, and the vast circular gap at the center of the dash now houses the infotainment and navigation screen.

The ambient lighting receives a facelift, too, with the LED dashlight switching colors as it acknowledges changes in engine output, speaker volume and other factors like climate control. Easily customizable, this feature would be indispensible to any budding Lothario with a hot date in the super-comfortable passenger seat. The car’s sport seating for five combines lateral and thigh support, lending even more comfort to the already serene cabin.

We left the huge panoramic moonroof open for the majority of our time with the MINI, keeping family and friends happy and cool. They also appreciated the extra legroom out back. In fact, the trunk space measures 6.7 cubic feet larger than the two-door, almost doubling to 13.1 cubic feet.

Turning to materials, our MINI Yours Int Style Fiber All inclusion was refined and practical, and some of our passengers remarked that it felt as luxurious as a high-end sedan. The center armrest and leadliner in lustrous anthracite complemented the JCW leather steering wheel, which had fantastic grip and looked incredible. The hidden dash storage came in handy for my iPhone 5S and wallet, though we’re sure some unscrupulous drivers could think of more sneaky uses for the compartment. 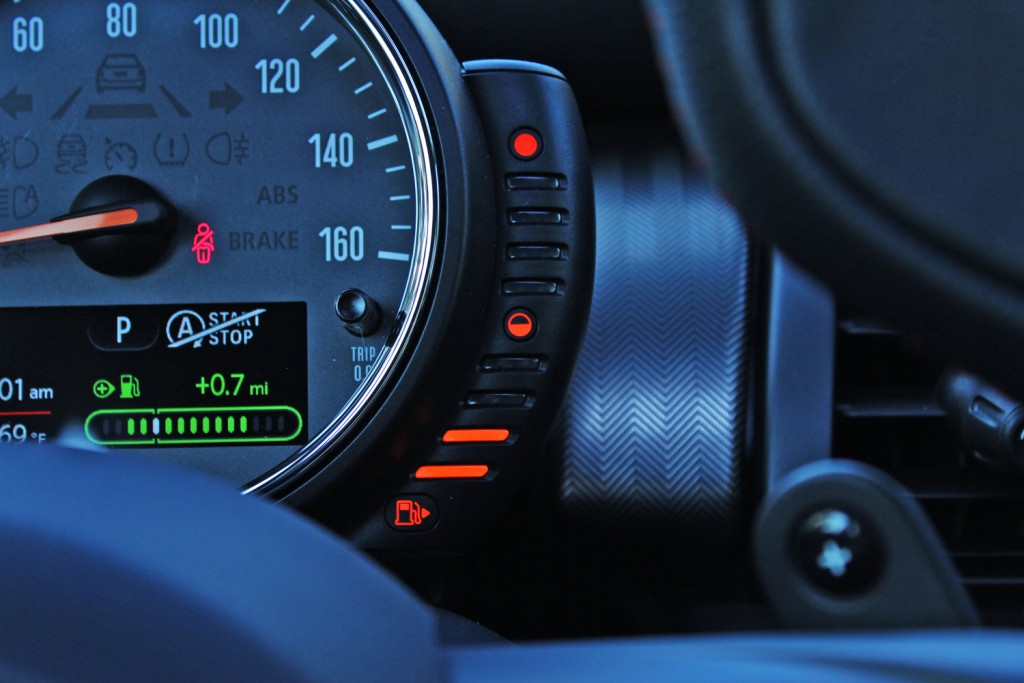 The MINI packs some BIG punches in the fuel economy stakes. Considering MINIs propensity for exerting a comparatively tiny footprint, the projected figures of 26-mpg in the city and 33-mpg on the highway are admirable. During a 100-mile trip we observed 29.8 mph, which was above the 29 forecasted average. For the rest of the week around the city, we achieved 25 mpg. Even with the increased curb weight (110 pounds more the the 2-door) and passenger capacity, the 4-door MINI is a great choice for anyone worried about the environment or their wallets.

Our electric blue tester was armed with a 2.0-liter MINI TwinPower Turbo 4-cylinder engine that was made by BMW and cranks out 189 horsepower and 207 lb.-ft. of torque. The beefier engine makes the car’s extra weight unnoticeable. A Sport automatic transmission offers Sport, Mid and Eco driving modes, represented by red, yellow, or green illumination on the interactive LED ring. The Sport mode impressed with its “Let’s Motor Hard!” display and idling prowess. Meanwhile, the adjustable dampers and rigid, responsive power steering was some of the finest we’ve seen this year, and a mere 6.5 seconds was all we needed to reach 60 mph.

The MacPherson strut front/multi-link rear suspension, and front and rear disc brakes made flat cornering possible, and we never felt in danger of mounting two wheels.

Dynamic Stability Control and Dynamic Cruise Control mean the car feels a lot faster than it is, and provides nimble, go-kart handling that was great fun to trial. Bumps and potholes were no obstacle, though they can be felt when seriously testing the throttle.

As the fastest MINI to date, the Cooper S retains the classic agile characteristics the car is famous for, while also boasting a distinctly quieter cabin. After seven days, I was reluctant to return the zippy little beast. 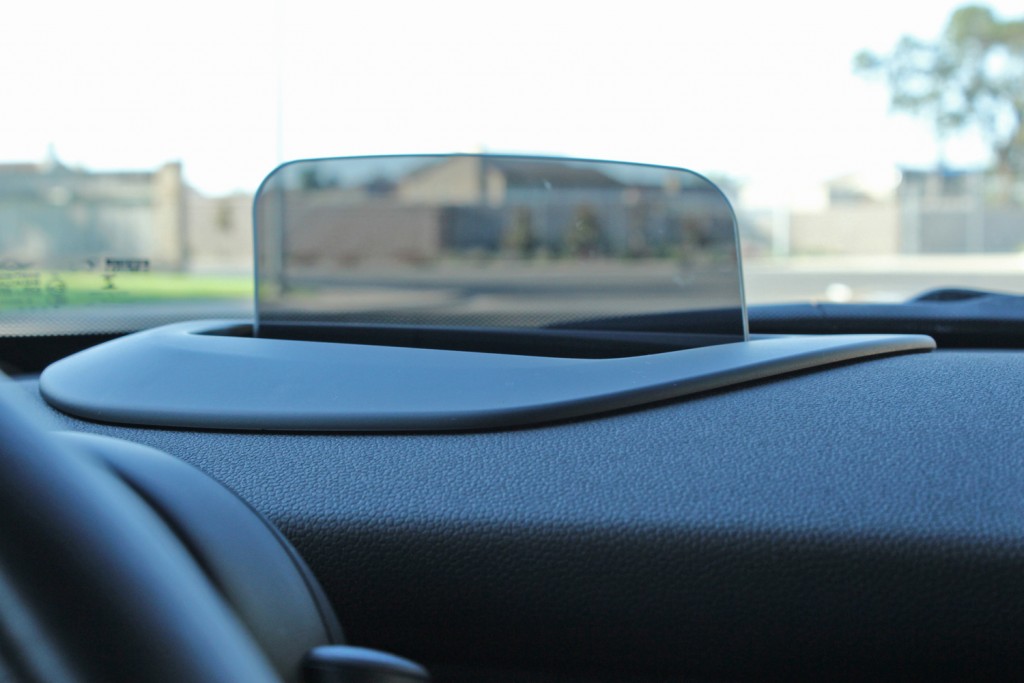 Move over Herbie, this MINI is fully loaded – literally. Our Fully Loaded package ($4,500 inclusion) and Navigation System with enhanced BT and USB connection was a treat.

A huge LCD screen, or intuitive window as MINI refers to it, sits in the middle of the dash. Despite being new to the world of MINI infotainment, it took no more than a couple of minutes before I was controlling the system like a pro. MINI Connect XL is particularly useful. It recognized my iPhone (and a passenger’s Android) without a hitch and I updated my Twitter status without taking my eyes off the road.

Aside from Twitter, my Spotify account also got a workout and played clearly through the Harmon/Kardon premium sound system with six speakers. The speakers are good for more than music, and real-time traffic info is the most useful feature you can blare out of the high quality speakers. AM/FM radio and iPod connectivity were also put through their paces.

Keeping with the jet fighter theme, the innovative Head-Up Display (HUD), on-board computer and toggle controllers had me reaching for a pair of aviators and demanding my friends call me Maverick. The device made checking performance and entertainment stats so easy I had little trouble simultaneously using the touch controller that responds to simple inputs. Make no mistake, this is a smart MINI!

Engineered to evade mishaps on the road, a cavalcade of safety features is packed into the 4-door. A robust steel front and side panels, flex-free frame, and eight dual-stage Smart airbags (2 front, 2 side-impact, 2 knee, and 2 ceiling mounted) are just the beginning. Indeed, the airbags are so intelligent they keep a constant vigil on driver and passenger positions and seatbelt use to ensure optimal inflation rate should an accident occur. Corner Braking Control made manoeuvring even tighter than we expected of a MINI, as did the electronic brake force distribution and anti-lock braking system.

After a week of driving – including a single 100-mile trip – we put the tire-pressure monitor system through its paces and found virtually no deflation. The system takes measurements quickly, so drivers covering a healthy number of miles each week would garner a great deal of use from this feature.

Rounding out the safety attributes on our Cooper S were automatic headlights, driveway lights and rain sensor.

Without all the bells and safety whistles, the MINI Cooper S 4-door retails for $25,100. Endowed with all the premium upgrades, our tester was valued at $35,900.

This may seem a little pricey for a MINI, but believe us; you get some real bang for your buck. The classic styling, impressive fuel efficiency, premium interior materials, rapid acceleration and sharp handling are just some of the highlights we can’t get out of our minds. Despite backseat moaning about the restricted legroom, and poor rearward visibility, the MINI S 4-door hardtop is the ultimate choice for motorists searching for a functional, luxurious and oh-so-stylish ride.

Written By
Victor Mosqueda
More from Victor Mosqueda
The McLaren 650S is one of the fastest production supercars money can...
Read More
0 replies on “2015 MINI Cooper S Hardtop 4 door”