A conceptual beauty brought to life

Nissan proudly presented the first Murano SUV in 2003, complete with a beastly V-6 engine. Originally modelled on the performance-driven front-wheel-drive Nissan FF-L platform, the Murano reigned as Nissan’s only SUV crossover in the North American market until 2007 when the Nissan Rogue was released.

The Murano mid-size crossover has received a number of cosmetic and technical upgrades over the years. E.g. a new exterior trim was rolled out in 2006, while in 2010 Nissan included a remote start/entry feature and 2013 saw the introduction of a collision warning and mitigation system. On a more substantial level, major alterations occurred in 2009 with a full overhaul and redesign.

Borrowing its name from the iconic glassblowing region of Murano in Venice, Nissan designed the SUV to resemble the timeless and sculpted styling the province is renowned for.

This week we drove the 2015 Nissan Murano Platinum AWD, inspired by the aerospace industry, to see if it lives up to its namesakes’ high standards to become worthy of the title of Nissan’s new flagship crossover. 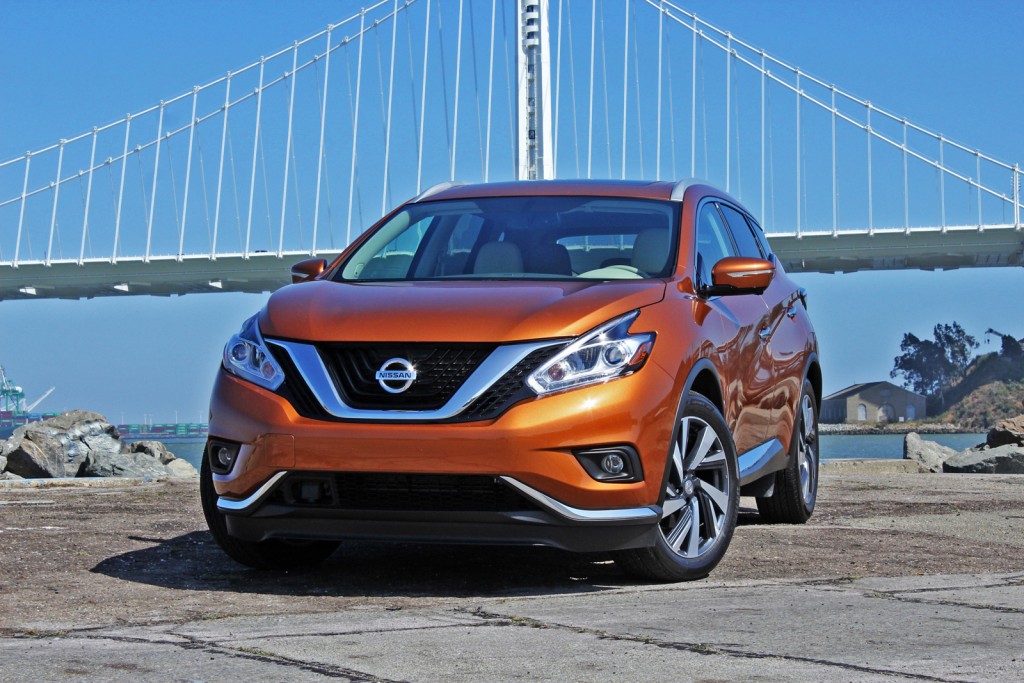 In a market awash with interchangeable and indistinguishable SUV options, seeing the Murano (in a peachy Pacific Sunset hue and Platinum trim) roll up was like a breath of fresh air at a garlic convention. Showing off the brand’s daring new design direction, my attention was first drawn to the wide, low stance and V-Motion front end (also found on the new Maxima) that squeezed in an aggressive grille and boomerang headlights for a masculine first impression. Also sparking my interest were the shiny 20-inch machine-finished aluminum-alloy wheels with 235/55R20 tires.

In keeping with the innovative concept version revealed in 2013, the new Murano sees concept styling on the open road. Symmetrical, fluid and sleek lines take center stage thanks to the new ‘Resonance’ styling, and the body receives a couple of rugged lower rocker panels and rear tire air deflectors for enhanced aerodynamic performance and a look of being naturally formed by wind.

Aside from the moonroof, and in keeping with its Italian glassblowing muse, glass is given special treatment at the rear with tinted privacy glass installed.

Sticking to shiny surfaces, the heated outside mirrors with integrated turn signals add to the SUVs aerodynamics and offer extra safety during frosty months. In fact, the car’s smart design – including an exclusive rear bumper surfacing to promote air-flow – has seen the coefficient of drag improved by 16% on the outgoing model. Now sitting at 0.31, it enjoys similar drag found in high-end sports car.

Particularly useful were the large rear doors that allowed easy access to less mobile – or oversized – occupants. Another favorite feature that would be indispensible to active families was the power rear liftgate, which came in handy when we loaded two sets of golf clubs into the 40 cubic foot trunk. No awkward manoeuvring here; the broad opening replaced any hiccups and there was room to spare.

Rounding out the exterior highlights were swanky silver roof rails (another plus for sports buffs or weekend warriors looking for a bit of al fresco action) and dual chrome exhaust finish.

INTERIOR: LUXURY BEYOND THE PRICE TAG

Boring beige gets a facelift inside the Murano’s cabin, where a gorgeous leather-appointed Cashmere fit out dominates (Mocha and Graphite interior alternatives are also available). In our opinion, the Cashmere is certainly the most desirable interior color option, though problematic to keep clean. If you cart around kids or animals, opt for a darker shade.

Complimenting the futuristic exterior, Resonance concepts are evident inside as well as out. In a bid to enhance angles and transparency, the Murano encourages interactivity within its ‘social lounge’. An example of this is evident when analyzing the center console, which sits low and wide to stimulate conversation between front and rear passengers. Cabin noise isn’t a problem either, as Nissan have stuffed extensive insulation around the vehicle to keep the ride smooth and silent – no more straining from the back seat to catch snippets of discussions!

NASA-inspired fatigue-reducing zero gravity front and rear outboard leather seats are pretty special too. Our model came with 8-way power drivers seat (with power lumbar support) that was so comfortable I could have slept in it if the need arose. Both the driver and front passenger receive heated and cooled cushioning, while the 60/40 split fold-down back seats only inherit the heat setting.

The tilt/telescoping steering wheel was leather-wrapped and heated (not a function we needed to test during a Californian summer). Above the steering wheel, a 7-inch customizable advanced Drive-Assist screen accompanies the neighboring 8-inch color infotainment display with multi-touch control. A 50% reduction in audio/nav buttons and knobs is something other manufacturers should consider. Today’s obsession with connectivity and technology has resulted in modern vehicles becoming more focused on tech than performance, cramming in more buttons than most drivers would ever use. The Murano’s minimalist controls are highly intuitive and reduce tech rage and distractions behind the wheel. Devices are also kept out of the way, but accessible, in the smartphone storage area with USB ports and IT system integration to service the front and back seats.

We were very impressed with our mileage stats after a week of driving. The EPA rates the Murano at 21 mpg city, 28 mpg highway and 24 mpg combined. After pushing the car for seven days and running the A/C regularly, we observed a penny-pinching 27-mpg. We haven’t experienced numbers like this in any other crossover, especially considering its V-6 engine. Aerodynamic upgrades have obviously paid off. 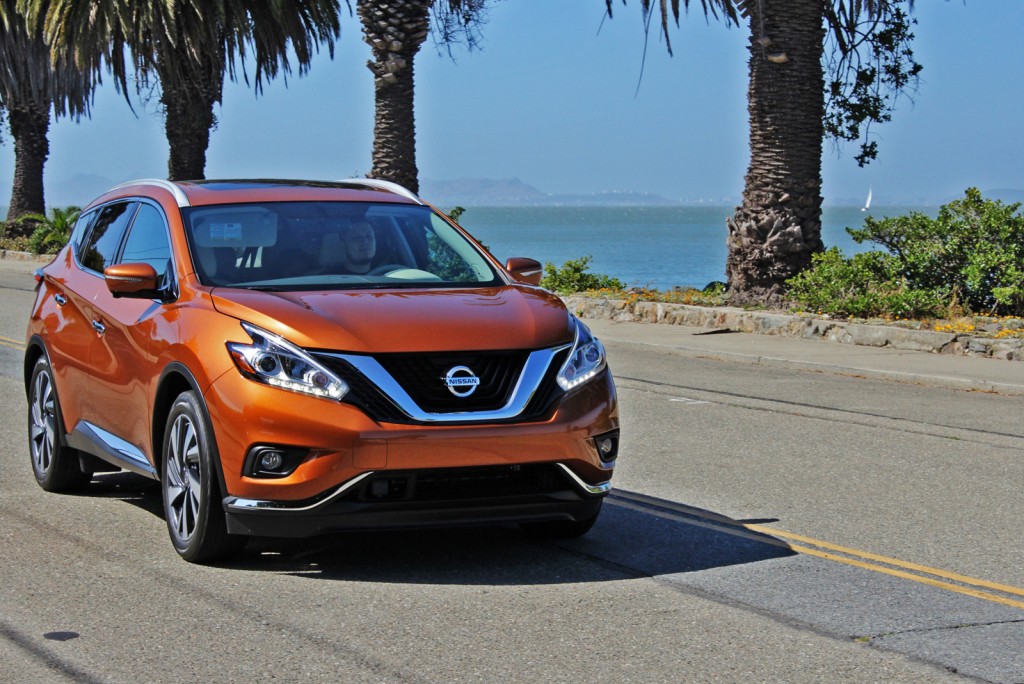 The Murano is equipped with a 3.5-liter V-6 engine that produces 260 hp and 240 lb.-ft. of torque, figures that have remained unchanged from the previous version. Indeed, the V6 engine has remained a staple under the hood of many crossovers and Nissan SUVs for years. A Nissan-branded “Xtronic” CVT is the Lyrebird of transmissions, imitating gear changes relatively seamlessly and eliminating lethargy when driving at low speed. Our Platinum AWD performed respectably, though it tended to feel overly composed, and lacking the spirited drive associated with a performance-based vehicle. But the Murano isn’t marketed for its performance credentials, so this criticism is purely motivated by my own need for speed. Nevertheless, acceleration could be better, especially while out on the highway. The addition of AWD is a welcome one, and it performed well over difficult terrain without causing much more than a blip inside the cabin.

It might not be the most dynamic car we’ve tested, but the power steering (electrohydraulic rack-and-pinion) was instinctively responsive, well-weighted and delivered second-to-none handing. 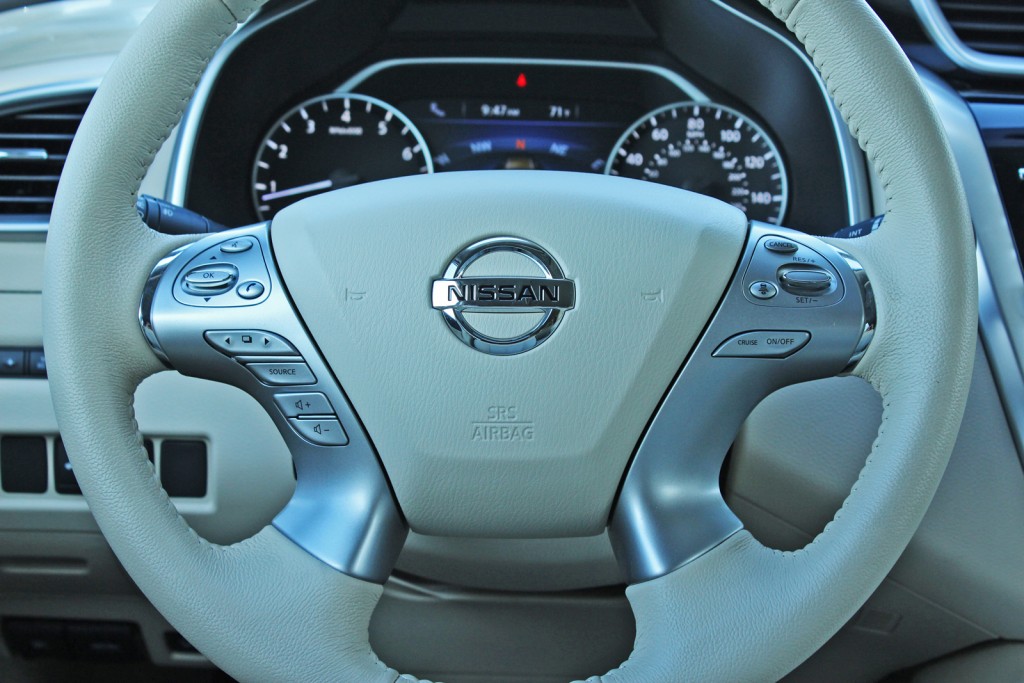 Tech upgrades in the 2015 Murano are brilliant, and so user-friendly I had them mastered almost immediately.

The new Driver Attention Alert system guards against noisy distractions from the backseat or driver fatigue by monitoring steering operation and flashing a coffee cup-shaped warning signal on the instrument panel display, accompanied by an audio alarm. Cruise control was a dream when we ventured out onto the highway, where we tested the 7-inch high-res Advanced Drive Assist Display. Navigation (via NissanConnect with navigation and mobile apps), pressure readings, safety warnings and fuel numbers are all shown conveniently between the gauge cluster.

Intelligent Cruise Control, Predictive Forward Collision Warning and Forward Emergency Braking were a real treat, and constituted part of our $2260 Technology Package that also boasted the largest power panoramic moonroof I’ve ever seen. City driving at night is transformed into a new and exciting adventure and we spent much time gazing skywards to admire the city lights (well, not me – I was busy looking out the windshield). 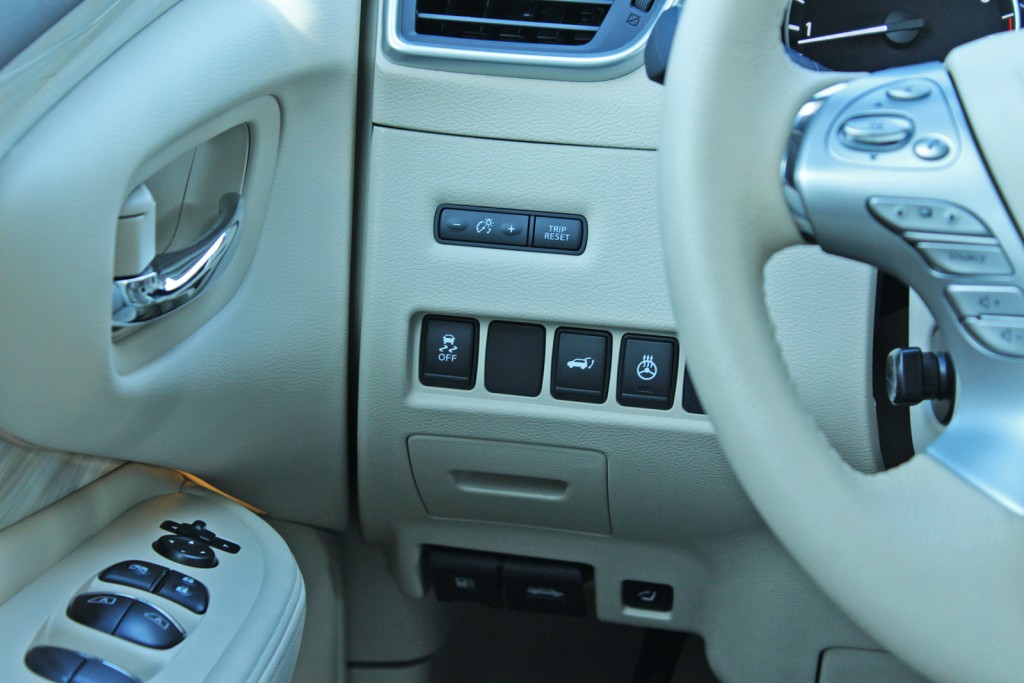 Zooming in and out of lanes, I found the Around View Monitor, which one-ups the rear-view apparatus by using four cameras strategically positioned to give a 360-degree view of your surroundings, outstanding. I spotted a number of motorbikes far earlier than I would have without the split-screen close-ups. A definite plus. Another bonus? The new intelligent key with push button ignition.

As well as being comfortable and roomy, the living-room-style cabin has all the creature comforts, making long sojourns with the kids less tedious. An unobtrusive 8-inch multi-touch color centre display is the hub of the action.

It goes without saying that AM/FM/CD/MP3/WMA outputs are present, as are front and rear USB ports, to save any squabbles over charging privileges. Bluetooth streaming and hands-free phone connectivity come standard, while voice recognition works when accessing either navigation or NissanConnect for smart phones. 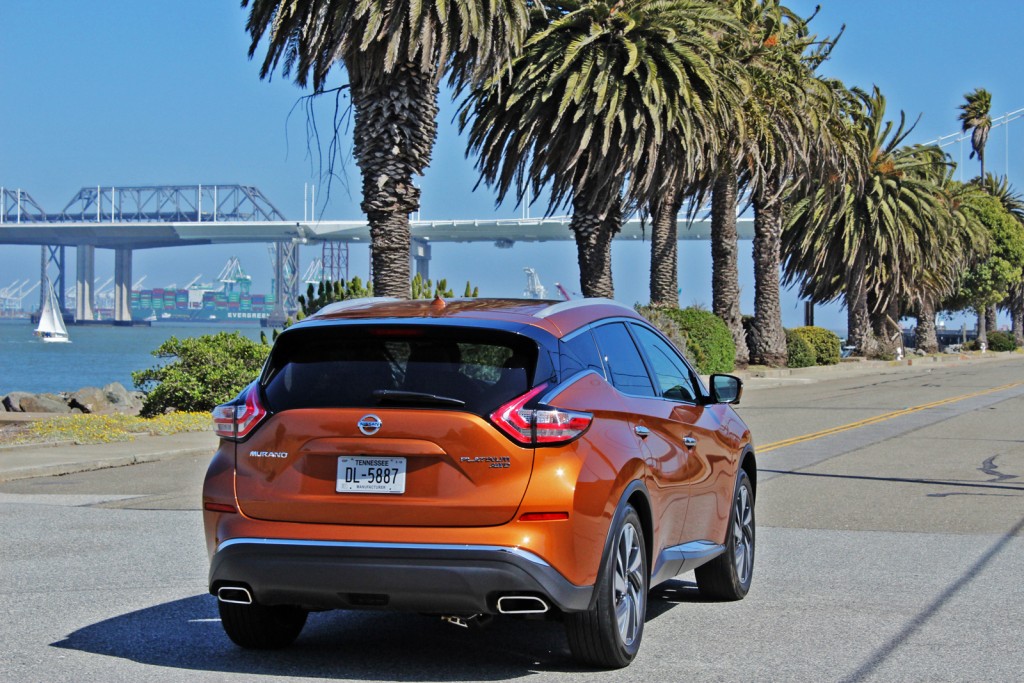 For that price, you drive away in a futuristic new design that turns heads. The quiet and generously sized cabin with plush fittings, Cashmere trim and Technology Package result in a car that looks and feels more expensive than it is. Aside from cosmetics, the ride quality was smooth and enjoyable and the fuel efficiency was very appealing.
On the negative side of things, we struggled to come up with anything notable that would discourage potential buyers. If we had to criticise something it would be that the ride can be harsh at times when equipped with 20-inch wheels. Other than that, we loved it.

The SUV crossover segment is a very competitive one, especially since the introduction of the Murano’s closest rival, the new Ford Edge with turbo V-6 engine. Much like the Murano, the Edge sports a redesigned exterior and cabin.

The Hyundai Santa Fe Sport, on the other hand, forgoes innovative styling and features for a turbocharged four-cylinder engine.

Another close rival is the more expensive Lexus RX 350, while the ever-popular Jeep Grand Cherokee puts up a good fight. As a more rugged choice, the Cherokee holds the title of bestseller in the mid-size crossover market.
The comfy Toyota Venza is another noble competitor, but until the RX 350 is released, the redesigned Murano remains our pick of the bunch, and is an intelligent alternative to more expensive luxury crossovers.