What’s a motorist to do when he wouldn’t be caught dead in a Chevy Suburban or Tahoe, but can’t afford the likes of a Cadillac Escalade? Buy a 2015 GMC Yukon Denali 4WD, that’s what! There’s a reason Denali models account for more than 60% of all GMC Yukon sales and this week I got to see why, as I road tested the refined and innovative Onyx Black Yukon Denali. Compared to its 2014 counterpart, this year’s incarnation sports a new interior, updated exterior styling and a refined driving experience.

Size alone makes this SUV unmissable, but add a splash of dramatic Onyx Black paint and a savage chrome mesh grille (which trumps the regular 3-element grille found on the non-Denali Yukon models), and you’ll be snapping more necks than a chiropractor.

Our tester was tricked out with the Denali Premium package (fantastic!), and boasted epic 22-inch aluminum wheels with painted inserts, and aluminized stainless-steel muffler and tailpipe.

Lighting comes courtesy of HID projector headlamps and front fog lamps, while rain sensing front wipers and power heated outside mirrors keep you seeing things clearly (no more scratches caused by hurriedly scraping away layers of snow with chilblained fingers in a bitter rush to get to work on time, and avoid hypothermia).

The GMC Yukon Denali gets one up on the Sierra 2500HD we trailed a few weeks ago thanks to the addition of power-retractable running boards, a huge bonus for those traveling with little ones and a feature that should be included on all full-size SUVs.

Rounding out the Yukon’s exterior traits is a power hands-free liftgate with programmable height eliminating any stressful key-fumbling and back strain.

For the driver and front passenger, heated and cooled seats await, while heated second row seats create a comfy core. On the topic of temperature, the tri-zone heating and cooling control (move over, dual-zone climate control, you’re so 2008) is pinpoint accurate, so you’ll never sweat under pressure or freeze in a tight spot.

Drivers are treated to all the mod cons including a heated steering wheel attached to a power tilt and telescoping steering column, a center console capable of holding hanging folders or laptops and iPads (or a small animal), illuminated storage and charging dock behind an articulating eight-inch-diagonal color touch screen, and power-adjustable pedals. And despite its size, GMC has done a stellar job keeping cabin noise whisper quiet; the inlaid and triple-sealed doors, acoustic-laminated windshield/front-door windows, valved exhaust system and redesigned mirrors reduce noise and refine aerodynamics.

Our Denali Premium package came with a rear seat Blu-Ray entertainment system with nine-inch-diagonal LCD screen, a godsend during our road trip to San Francisco with the kids. A dose of Monster High activated and controlled using the universal home remote was the perfect remedy to restless and unruly minors. The two wireless headsets meant the kids could watch their movie without disrupting the tunes playing via the 10-speaker Bose Centerpoint Surround Sound Audio System.

I also took full advantage of the second row power fold and tumble bucket seats and third row 60/40 split-bench power fold seats, reclining both rows to fit my dad’s luggage when taking him to the airport over the weekend. In addition to the cargo management system behind third-row seats, storage space was never an issue. 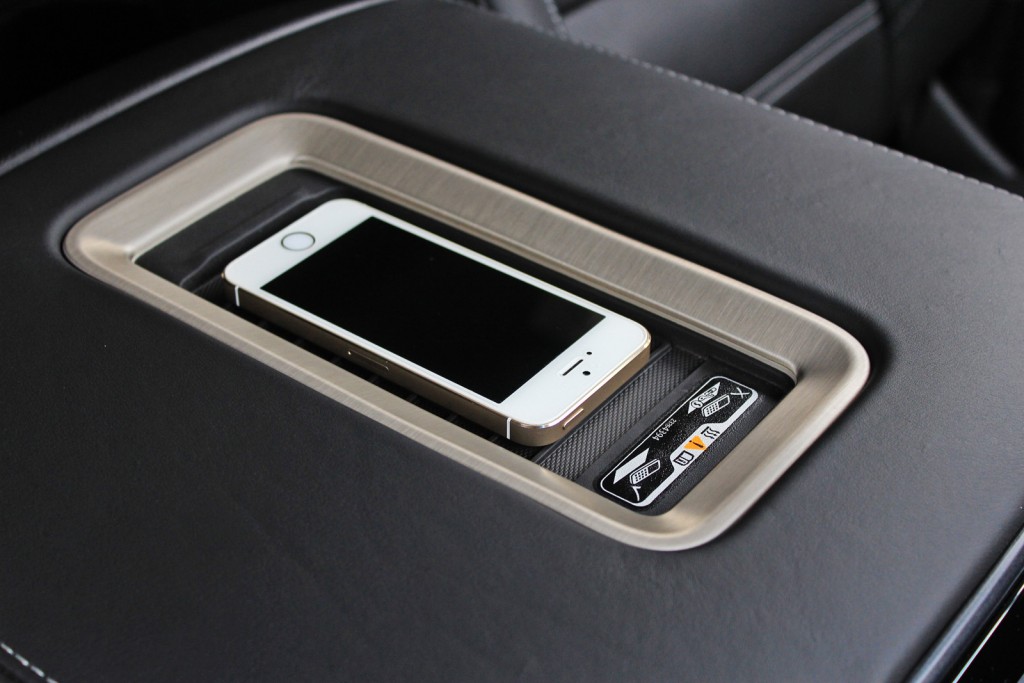 Tech nerds and IT-enthusiasts alike will enjoy the innovative inclusions in the Yukon Denali, ensuring drivers stay connected and in control. Keyless start is always a convenient function, as is customizable driver display, and wireless phone charging (but apologies to iPhone users, as it doesn’t charge Apple devices). Unlike the NX, where the center console needed to be manually opened to reach the charging dock, this SUV is equipped with a charger on top of the console for easy access and last minute charging.

Unfortunately, we forgot to request access to the 3GB/3-month data trial from our fleet manager and were unable to test the 4G LT Wi-Fi hotspot.

The Bose Centerpoint Surround Sound System was great, and we enjoyed playing around with the Time Shift function that enables you to pause and rewind live radio. Outputs are viewed through an intuitive new interface that utilizes next-generation GMC IntelliLink infotainment and Color Touch Navigation systems.

Along with the standard output modes, including Bluetooth, we activated the text message alerts, hands-free calling and Siri Eyes Free voice pass through. I even attempted a few Spanish phrases, and the natural-language voice recognition had no trouble picking up my second-rate Spanish. Another useful function is MyMedia, which allows passengers to connect to media libraries from their digital devices. 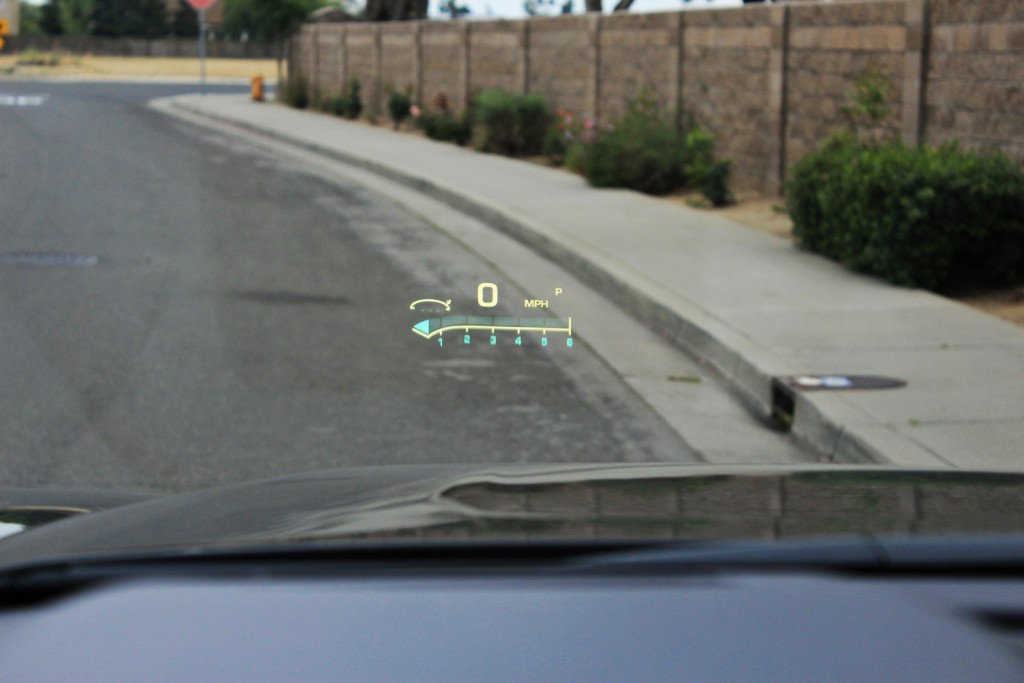 Possibly my favourite tech component was the multicolor head-up windshield display. All the important driving data is collected and projected onto the windshield at eye-level in one of four viewing modes.

Just a few of the stats you can pull up include audio data, navigation and compass displays, safety indicators, and performance indicators such as transmission position and speed.

EPA figures reflect segment averages and stand at 15 mpg in the city and 21 mpg on the highway, with a combined 17-mpg. After a week of driving, we observed an average closer to the lower end of the spectrum at 15.3 mpg, but nevertheless an acceptable figure for a gas-guzzling SUV. Indeed, the new 8-speed transmission ensures superior mileage. 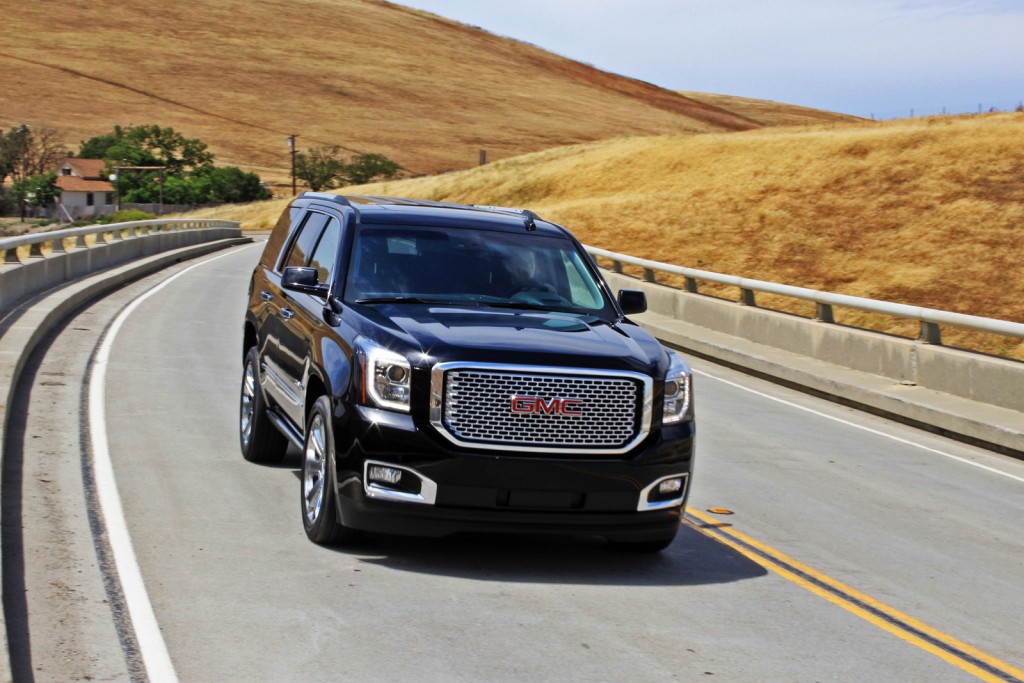 A Corvette-sourced 6.2-liter EcoTec3 V8 engine with Active Fuel Management can achieve up to 420 horsepower and 460 lb.-ft. of torque, while an 8-speed automatic transmission with 4WD mode supersedes the 6-speed automatic previously used. This transmission upgrade is worth your time, producing lively take-off and balanced power distribution to each wheel when in 4WD mode. Lateral handling proved less inspiring than we’d hoped, but overall, performance was up to scratch, even when pushed hard, due in large part to the Suspension Package’s magnetic ride control, front coil-over-shock with stabilizer bar and rear multi-link with coil springs. The 7,300-lbs. body eased its way around corners like a car half its size and can reach 60 mph in an admirable 6.8 seconds.

Though we didn’t have any heavy cargo to haul, the SUV is up to the task of towing 8,100 lbs. Assisted by automatic rear load levelling and trailer brake control, it includes a neutral position for dinghy towing.

The standard vehicle cost will set drivers back a pretty penny at $66,770, but our model came with a full-range of options pushing the price up to $74, 680. While we can’t help but wish it was slightly more affordable, the Yukon Denali 4WD is still a more attractive choice than it’s nemeses, the Infiniti QX80, Lincoln Navigator, and Toyota Sequoia Platinum.