Bottoms up, and tops off to Audi!

Last year I was privileged enough to test drive the brand new 2015 Audi A3 1.8T, so when the convertible version of the A3 rolled up, I had no doubts I was in for a good time. Audi has essentially taken the features and tech built into their full-size luxury cars and transferred them to create an affordable and compact luxury vehicle.

First appearing on European roads in the mid 1990s, the entry-level A3 made its debut in the US in 2006, and the compact, cost-effective car took off. Consumers were sold on the concept of a smaller, lighter version of the A4, with all the luxury and comfort you’d expect from the German carmaker. Offering a sleeker option than mainstream hatchbacks, but cheaper alternative to an expensive wagon or sedan, the latest incarnation of the A3 is worthy of it’s place on the A3 family tree. 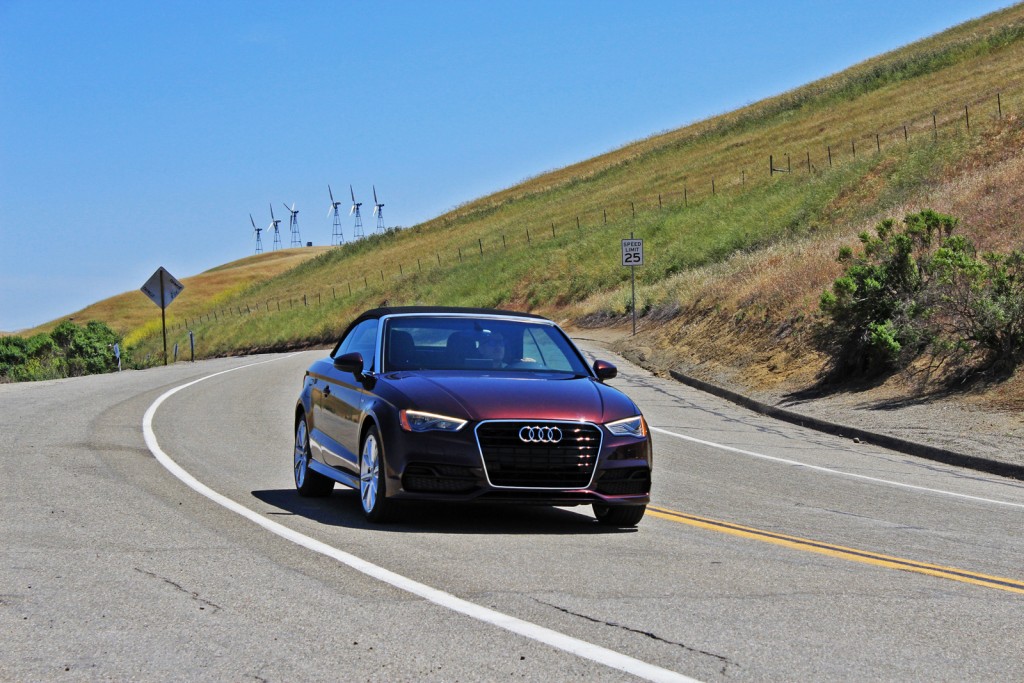 California is living up to its reputation as the Golden State this month, with gorgeous conditions for driving with the acoustic convertible top down. I took full advantage of Mother Nature’s goodwill and had a blast cruising around town. Whether my lustrous hair flapping in the wind (not likely) or the stylish S line exterior, heads were turned during my five-day Audi affair. And with 18 inch 10-spoke-design wheels, all season tires, power folding and heated exterior mirrors, LED headlights with LED DRLs, front filler panel and single frame grille with alluring angled upper corners, there’s plenty to appreciate in this captivating convertible. To boost your cool, come hither factor, enable the electro-hydraulics with the touch of a button and watch the roof recline in under 20 seconds, even while driving up to 31 mph.

As a car enthusiast who values simplicity, the new A3 ticked all my minimalist boxes in an artfully functional way. A Chestnut Brown prestige package interior complimented my tester’s red exterior perfectly.

The first thing I noticed was the ultra-thin retractable MMI screen and creative circular air vents worthy of a design award.

With more buttons than you could poke a stick (or 10 fingers) at, the internal layout is sleek and modern. Toggle switches control MMI functions and the 3-spoke leather-wrapped multifunction steering wheel was one of my favourite new inclusions. My test model was fitted with the optional touch feature, which was incredibly simple to use and quick to master. The LED interior lighting package and auto-dimming interior mirror with compass was also highly functional without being difficult to command.

Worried about safety in a convertible? Fear not, because the A3 comprises driver and front passenger advanced airbag supplemental restraint system with knee and seat mounted head thorax airbags.

Split folding rear seating accommodates two with limited leg-room (31.9 inches), not surprising for a car sporting a wheelbase of 102.2 inches (2595 mm) and a length of 175.4 inches (4456 mm). Little ones would be most comfortable riding in the back, and Audi have included lower anchors and tethers for children (LATCH).

Innovation is obvious when admiring the new 3D Optic design. Decorative trim strips create a 3D glass effect on the instrument panel and door.  Using an intricate and unique process, the appearance of glass is duplicated without the hefty weight. Multiple layers of polycarbonate film are placed either side of the trim, building up to create the 3D effect. A process known as vacuum deep drawing is then employed to guard against distortions before being back-sprayed and fit to the vehicle. The final stage sees the trim over-sprayed with a 5-mm thick, highly transparent plastic layer followed by a UV-curing clear coat to avoid scratches and the effects of corrosive cleaning chemicals.

In general, the tech components fitted to the new A3 are fantastic, though it was a shame my test model lacked the voice command function. Nevertheless, a truckload of features is crammed into this compact vehicle.

The Audi advanced key feature is just one example, representing the latest in keyless entry technology allowing drivers to unlock and start the ignition quickly and conveniently.

Also impressive is Audi connect with online services (6-month subscription). Though I wasn’t able to connect to the Wi-Fi hotspot, the system is capable of connecting up to eight devices! Everything from traffic and weather to directions and social media integration can be utilized.

The Audi MMI touch is a high tech, but user friendly, interface that uses Audi MMI Navigation (without voice control). The navigation system uses Google Earth to output information, ensuring precise and reliable results every time. In addition to directions, data relating to changes in street names, traffic flow and construction zones can be accessed.

Concerning safety, this convertible has the lot, including the parking system plus with rear-view camera, Audi side assist and anti-theft alarm system.

The all-important EPA numbers stand at 24 mpg in the city and 35 mpg on the highway for a combined 28-mpg. After putting the A3 trough its paces for a week, I was pleasantly surprised to record an average of 26.9 mpg. It’s not often you record numbers below the EPA stats, and considering the drag expected in a convertible, and the fact this model weighs 200 lbs. more than the sedan option, the A3 certainly wont break the bank in terms of fuel consumption. For even greater fuel efficiency, drivers are encouraged to wait for the A3 2.0 TDI to be released. 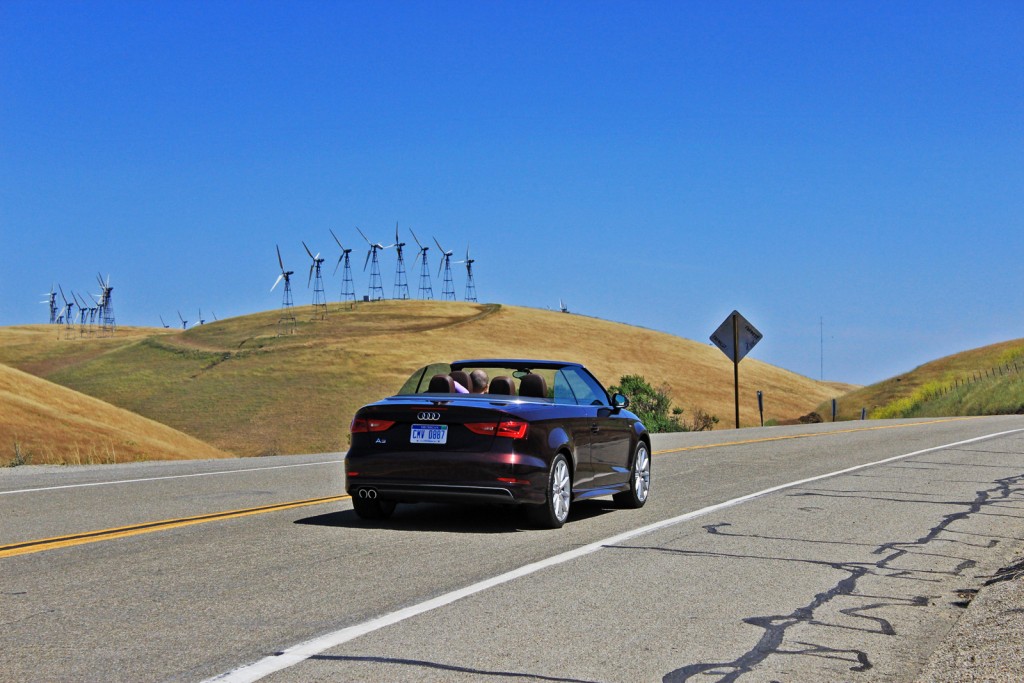 The rev-head in me would have loved to have trialled the more exhilarating A3 2.0T. But First World problems aside, the base model 1.8T (weighing 3,373-lbs) was a joy to drive.

Power is derived from a 1.8L TFSI engine for 170 hp and 200 lb.-ft. of torque with a 6-speed S tronic transmission to ensure seamless gear shifting.

The front wheels are powered by a 6-speed dual-clutch transmission with fully automatic and sequential shift modes. Handling and acceleration are decent and the overall drive experience was enjoyable, particularly when using Sport mode. Perfect for a Sunday cruise – not a drag race with mates – 0-60 mph was reached in just under 7.5 seconds.

As expected of an A3, steering is superb, and adds to the relaxed atmosphere created, despite less-than-ideal understeer and body roll.

The A3 isn’t without competitors; the Mercedes-Benz CLA250 is a worthy opponent and retails in the same price range; the more exorbitant BMW 320i matches the Mercedes and Audi, if not surpasses them, when considering performance and styling; and the Acura ILX is cheaper than the bunch, probably due to the upgraded engine’s lack of an automatic transmission. Additionally, the soon-to-be-released BMW 228i coupe is sure to give the A3 a run for its money.

Apart from the occasional sluggish tack-off, and confined trunk space and rear seating, there isn’t much to complain about. In fact, I may be so bold as to suggest the 2015 Audi A3 Cabriolet 1.8T is streaks ahead of the contenders. Sporty options, artistic styling, relaxed cruising, and luxury beyond its price tag make this luxury compact near unbeatable. Take it for a spin and judge for yourself.