My review this week requires a bit of a backstory. Because of my disability, I have limited use of my left foot and leg. This means I have no way to clutch, thus I never get manual transmission vehicles. I’ve come to grips with it. I do miss out on driving some vehicles however. One such vehicle that I always missed out on was the Fiat 500 Abarth, a vehicle that was offered only with a manual transmission – until this model year.

I was able to slip behind the wheel of the 2015 Fiat 500 Abarth, with a new automatic transmission (not a standard option). Previously I drove the far more boring Fiat 500, so getting to drive the turbocharged Abarth infused some excitement into the too-cute-for-its-own-good 500.

My test drive for the Fiat 500 Abarth was extensive. I actually drove it from Cincinnati to Chicago, which gave me a vast range of how it performed in the suburbs, on the highway and in the urban jungle of the Windy City. While the Abarth is not without flaws, it was certainly a fun drive to Chicago. 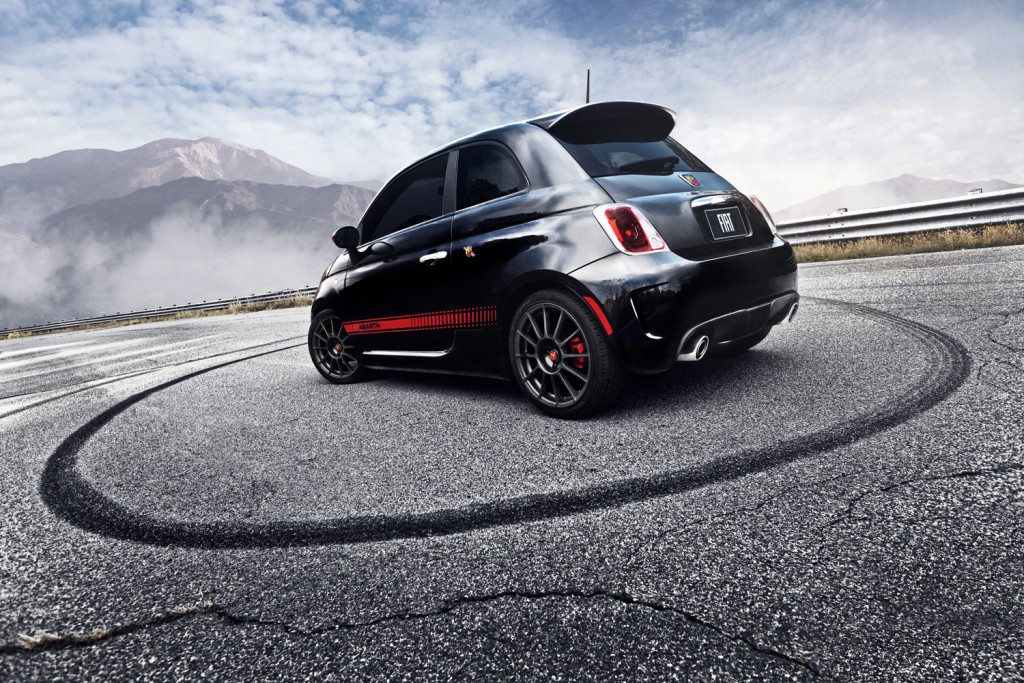 On looks alone, the Abarth shows its aggressive side which is good since the regular 500 is one of the most innocuous, silly-looking vehicles on the road. The 500 needs that touch of nastiness to have any street cred to go with its turbocharged engine.

It gets that aggressive look thanks to its black paint coat with complimentary red striping down the side and on the mirrors. The scorpion Abarth logo is subtle but noticeable and also provides some sex appeal to the 500.

16-inch wheels are further enhanced with red brake calipers. Together with the red striping, it all works congruently and gives the Abarth a nice side profile.

Under the hood lies a surprising amount of power, for such a small engine. The Fiat 500 Abarth has a 1.4-liter turbocharged engine that creates significantly more power than the tame non-turbo version. The Abarth, with the standard manual transmission, makes 160 horsepower while my tester (with the new automatic transmission) loses three horsepower for a total output of 157 horsepower and 183 lb.-ft. of torque.

These output numbers may look unimpressive, but the Abarth outperforms those numbers with a fast, smooth drive performance. In fact, the Abarth was great off the line (excluding a little bit of turbo lag) and even better on the highway at higher speeds.

Maneuverability was exceptional for this little car. Finding parking in Chicago was a breeze, and zipping in and out of the stop and go traffic was also easy thanks to the Abarth’s diminutive stature. Of course that smaller size also meant for a more cramped interior. 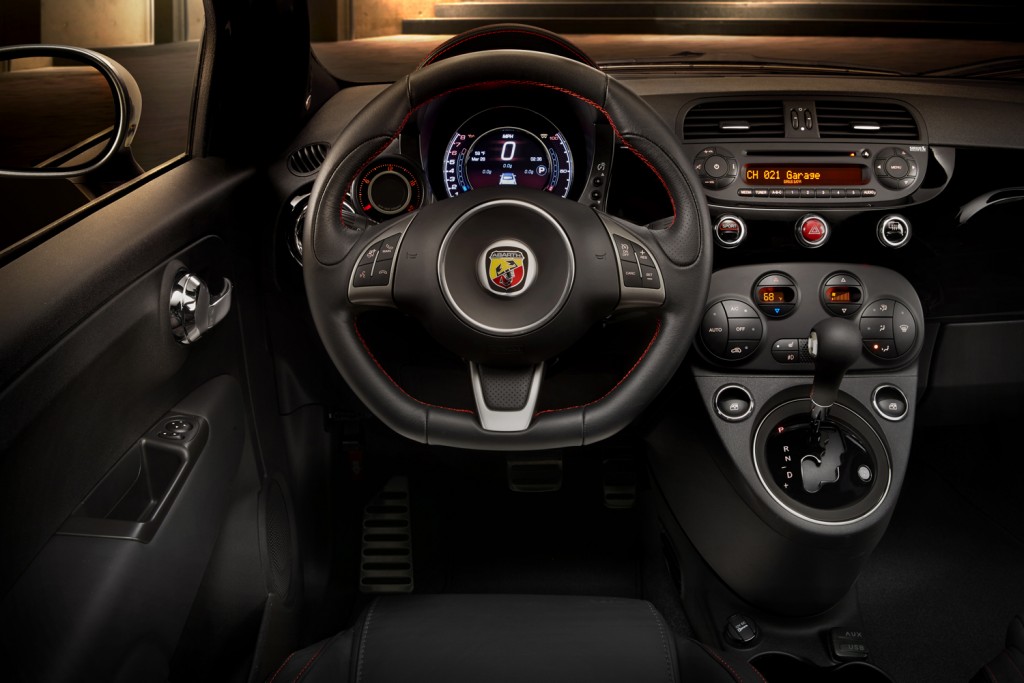 Headroom is adequate for front passengers, but legroom for anyone over six feet is lacking. The back seat is more of a token than a legitimate seating option, even for my teenage daughter. We threw our suitcases back there which served it well, but it would be nothing short of torture to make someone ride in the back seat for any amount of time.

The Abarth has a sexy, stylized interior, as compared to the other versions of the 500. The racing-style seats are more upright but aren’t as confining as other racing-style seats I’ve sat in. However, there are few options for adjusting the seat and only limited space to recline or move forward or back.

My tester came with the upgrade of the advanced audio package, which includes a collaboration with Beats Audio. The sound system was amazing, which helped stifle some of the obvious road and engine noise that permeated the cabin. 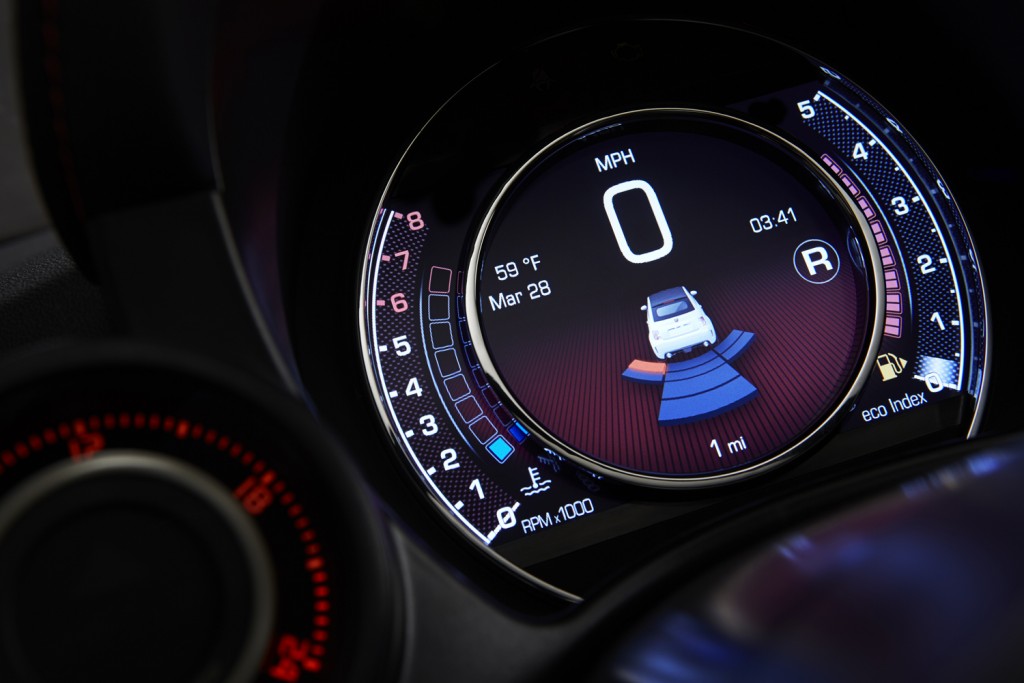 Fuel economy for the Abarth is good, considering the turbo engine. The Fiat 500 Abarth, with automatic transmission has an EPA rating of 24 city and 32 highway (the manual transmission has a rating of 28 city/34 hwy). In a week’s worth of varied, and extensive heavy-footed driving, I averaged 27 mpg. A full tank refill cost me under $20.

The Fiat 500 is marketed to go against rivals like the VW Beetle and Mini Cooper. And like those competitors, the Fiat 500 offers a sporty, fun-to-drive option for those who want to drive fast, while still being scene in a quirky, niche car. Adding that scorpion Abarth badge to the Fiat 500 makes all the difference!