The 2015 Subaru BRZ Series.Blue boasts traditional, yet distinctive, rear-wheel sports car styling on a budget. For rev-heads coveting a coupe, it doesn’t get much better than this. Striking a similar resemblance to its snazzy sibling, the Scion FR-S, the BRZ Series.Blue trumps the competition with superior aerodynamics and handling, despite maintaining a 200-horsepower, 2.0-liter-Boxer engine. Nevertheless, this limited edition two-door packs a punch thanks to alluring aesthetic upgrades and transmission so smooth you’ll believe the car is gliding rather than driving. So, get your engines running as we take a test drive and see what all the fuss is about.

As the nature of exclusivity implies, a mere 1,000 Series.Blue vehicles were manufactured, rolling out 500 each in WR Blue Pearl and Crystal White Pearl.

A bevy of functional aerodynamic amplifications are offered as part of the car’s Option Package: 02. Suited up in an STI-branded body kit, the special edition BRZ impresses with its front, side, and rear/underside spoilers, which not only improves the vehicle’s appearance, but also effectively increases frontal downforce and reduces the coefficient of drag from 0.28 to 0.27, all making for aerodynamic supremacy.

High intensity discharge headlights illuminate the way for two sets of 17-inch black finish alloy wheels and 215/45 R17 summer-performance tires: a reliable combination. Red brake calipers peek through the wheel’s spokes for a burst of color and flashy facade. Not just a pretty face, the BRZ houses ventilated disc brakes to make for a nimble drive. 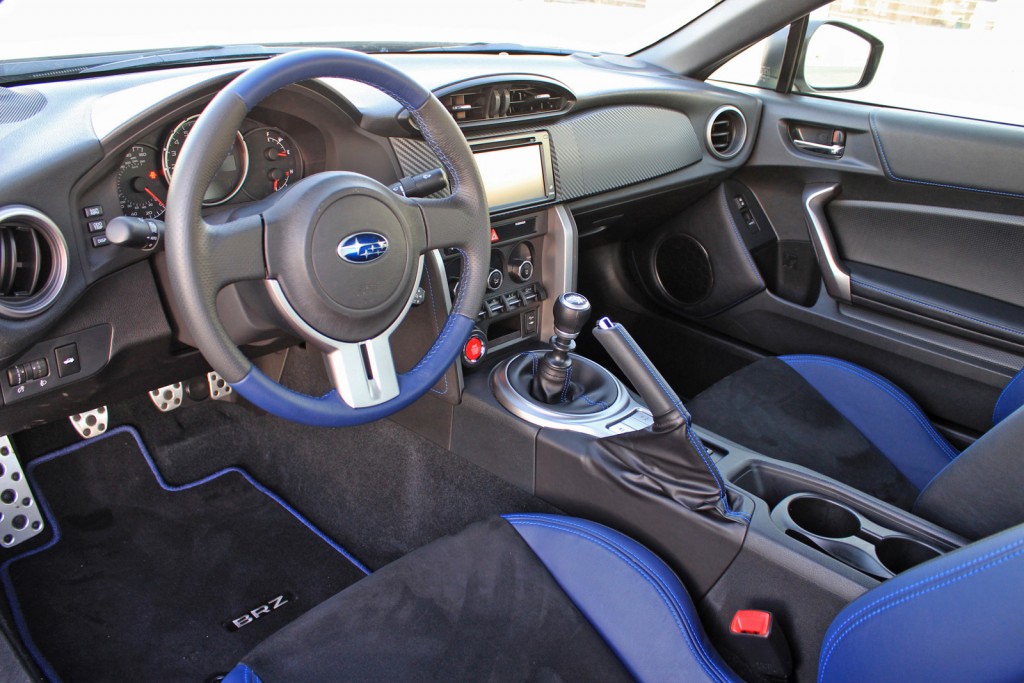 While its price tag affirms the BRZ is not a luxury sports car, the deal-tone (black and blue) leather and alcantra-trimmed interior with splashes of blue stitching and embroidery beg to differ. Subtle stitches adorn the steering wheel, manual shift boot, hand brake and cushy kneepads.

The two-door car should also be dubbed a two-seater, and unless your family is incredibly small in stature, or non-existent, the backseats are to be admired but not travelled in comfortably.

Up front, however, comfort is assured (as is a warm derrière) with heated leather seats. Peer down and you’ll notice the carpeted floor mats bear the BRZ logo in classic blue, and silver logos decorate the front seatbacks.

The car’s frameless day/night rear-view mirror is a fabulous new feature, but beware the dashboard’s unsightly simulated carbon-fiber trim. Constructed in two pieces, the joining gap is so noticeable it borders on annoying. All is forgiven, though, as the STI-inspired bright red push-start button adds a touch of “Fast and Furious” to proceedings. 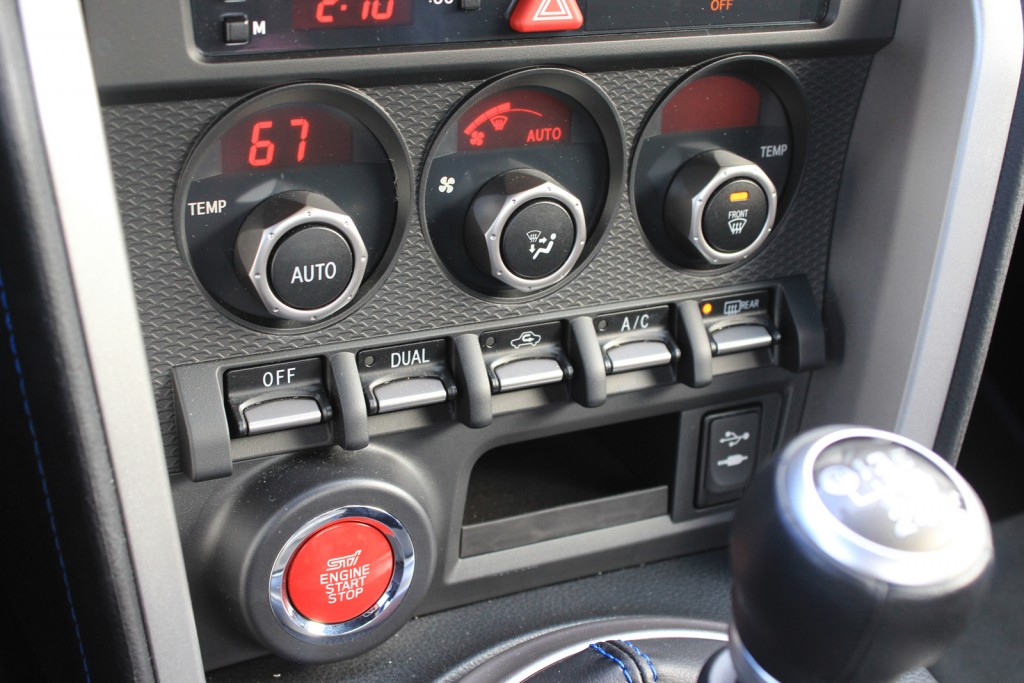 The STI push-start button is useful, but deceiving, as the car lacks an STI-enhanced engine. Other functional add-ons include keyless access passive-touch locking system, automatic climate control, heated front seats and exterior mirrors to avoid frosting over in the colder months.

New owners are encouraged to take advantage of hands-free Bluetooth connectivity and eliminate wrong turns with a portable navigation unit. 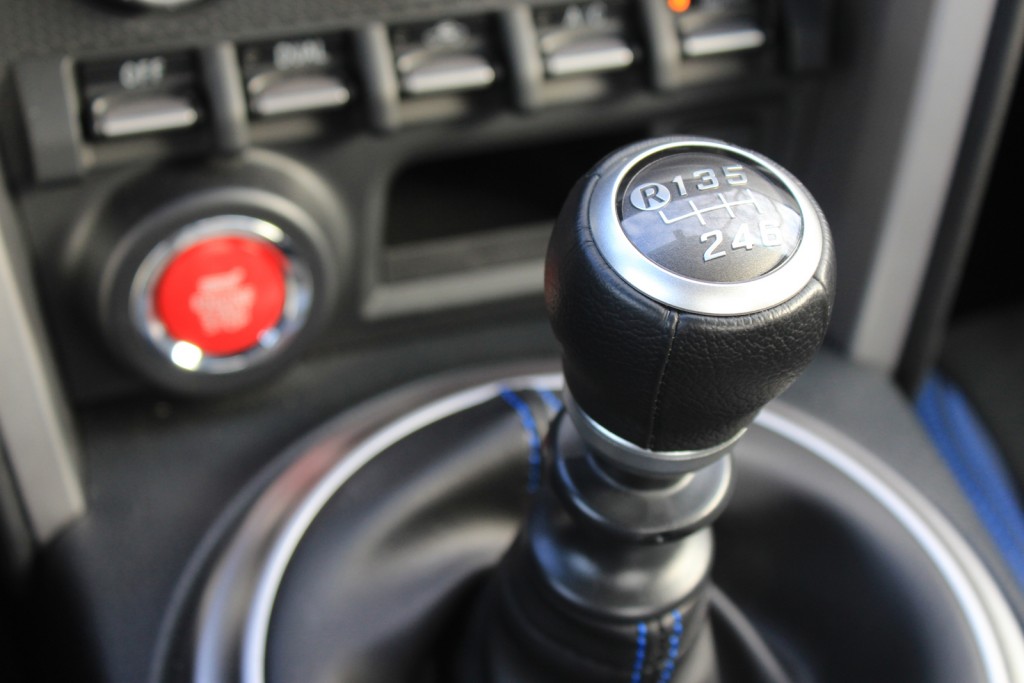 Performance, at the sake of fuel-economy, is an accepted state of affairs in the sports car market, but the agile BRZ Series.Blue is surprisingly fuel-efficient. Thanks to the vehicle’s superb center of gravity and lightweight-status, you’ll be zipping from 0-60 in 6.4 seconds.

The EPA rating suggests drivers can enjoy 22 mpg in the city, so a quick trip around town won’t drain the tank. The same is true for a cruise along the highway, where motorists can expect an impressive 30 mpg.

These figures are consistent and after little more than a week behind the wheel, you’ll be managing your EPA estimated miles in your sleep.

Turning to mechanics, it’s obvious Subaru believe they’re on to a good thing, as the set-up remains relatively untouched from previous incarnations of the vehicle. Pop the hood and you’ll find the naturally aspirated 2.0-liter Boxer 4-cylinder direct-injection engine that has become synonyms with BRZ models.

Many motorists argue the engine needs tweaking and lacks the power of its contemporary coupe counterparts. Simply take it for a spin and you’ll quickly realise the grunt is more than adequate for tackling any road conditions. Producing 200-horsepower and a respectable 151 lb.-ft. torque, the 6-speed manual transmission comprises the standard MacPherson front suspension and double wishbone rear suspension (plus Torsen limited-slip rear differential).

Contrary to appearances, the FRS and BRZ are quite different beasts, and the suspension setup of the latter – borrowed from the WRX STI – provides a slight edge. Coil springs and low mounted struts make up the front suspension, containing a standard front strut brace that adds a dependable rigidity to the components.

To the rear we encounter the double wishbone suspension and Torsen limited-slip rear differential that improve tire grip on all surfaces – rough or slippery – by cushioning against potential bumps or damage.

Additionally, the use of high-tensile steel on the body’s upper section coupled with the engine’s position lower down and further back in the chassis, give the BRZ an incredible centre of gravity. This, accompanied by the car’s lightweight status, makes for an agile and responsive driving experience.

So, despite its restrained horsepower, the 2822 lb BRZ gives the impression of speed and force far exceeding what the specifications imply.

Valued at $30,285, how does the new BRZ stack up against other low-cost sports cars? Many models have heftier engine capacity than the BRZ, but are ruined by lose gearboxes, resulting in precision that should be taken with a pinch of salt.

The Hyundai Genesis Coupe, for example, sports a 2.0-liter turbo-ready engine, as opposed to the Subaru’s 2.0-liter Boxer. Though decidedly more powerful, the Hyundai is a bigger car – much heavier and clunkier than the BRZ – and it handles accordingly. Don’t expect hairpin handling in this weighty coupe. In terms of transmission, there’s really no contest; the BRZ is cruising through the final lap, while the Hyundai is stuck in pit lane.

The two-seat Mazda MX-5 is another vehicle often compared to the BRZ. Unfairly labelled a ‘chick’s sports car’, the zippy little ride is inevitably lighter than the Subaru due to its lack of rear seating. Both are great choices, but the roomier interior (albeit slightly) and unbeatable handling – not to mention pitting the Subaru’s loftier 200 horsepower engine against Mazda’s 165 – means the BRZ finishes in poll position.

Both agile and affordable, the 2015 Subaru BRZ Series.Blue is streaks ahead of the competition.