A midsized sedan considerably improved from its previous model, the 2015 Chrysler 200C boasts a sleek, silhouette exterior, the latest tech specs, and a space-saving interior. While some features of this vehicle are more unique and favorable, the pros definitely outweigh the cons. Read on for all things Chrysler 200C, including looks, drivability, technology, and more.

Compare this model side-by-side with its incumbent and you’ll question whether the two are related.  Unlike the 2014 model’s boxy exterior that resembles an economy rental car, the 2015 sedan has an eye-catching, curvaceous shape. Though the look is practical, partly due to a need for aerodynamic improvements, the change is also aesthetically modern, making the car an attractive option for the younger generation. The drive feels a bit more luxurious than your typical sedan.

Other features include a honeycomb grill and headlights that wrap seamlessly from the front to the side.

Regarding the headlights: there are three different settings to ensure visibility at all times. You have LED daytime running lamps, High-Intensity Discharge (HID) headlamps, and LED fog lamps, all of which ensure optimum safety in every situation, whether it be inclement weather and dark streets.  The fog lamps proved to serve their purpose during my misty work commute, which made me feel safe on the hectic freeway. 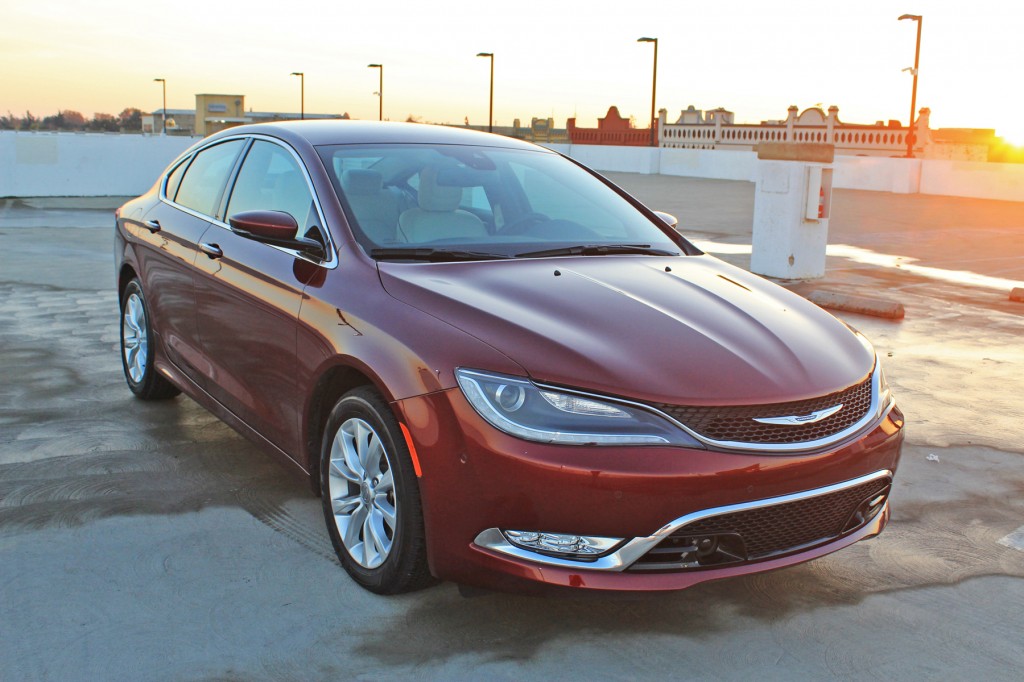 Each rearview mirror has a turn signal as a bonus safety precaution. The mirrors also have heaters; this feature is not unique to the car, but is an important asset for commuters who are in a rush. Once I turned the heat on, I waited less than a minute for my mirrors to be clear as day.

There are nine colors to choose from, including velvet red pearl (the color of the car I test drove), pitch black, and blue streak pearl. The wheels are 17-inch silver aluminum; other models such as the AWD have 18-or-19-inch wheels with polished aluminum cast.

The Chrysler 200C includes all the interior features that a car in its class should, and is quite comfortable sit in. Interior highlights include leather upholstery and a six-way power front passenger seat.

Perhaps most notable about this car’s interior is its space-saving attributes. Like other cars in its class, the shifter is in the form of a rotary dial and located on the dash under the climate controls. Rookie 200C drivers will have to get used to this, as I did, but it is easy to catch on. Plus, the dial makes for a more attractive look and improved efficiency. Within the dashboard space where you see the shift in more traditional cars, designers built an area for USB ports.  I was able to charge both my phone and iPad during my morning commute without the devices crowding me, and had cup holder room for coffee.

The dashboard is neatly organized with a personalized Driver Information Display (DID). This 7-inch dashboard features state-of-the-art graphics that can be customized to your liking, including personalized audio, temperature, engine performance notifications, trip information, maintenance needs, and more. Sirius XM Satellite is included with the model, which, although a standard feature of 2015 cars is an added bonus.

After a week of mainly city driving, I had a good sense of what this car is made of. The Chrysler 200C is a 9-speed automatic with improved aerodynamics and front-wheel drive, which makes for a smooth, enjoyable ride. Electronic steering keeps the vehicle steady so it does not veer right or left, which was great during rainy days.

The car gets 28 mpg combined; 23 city, and 36 highway. Engine-wise, the car includes improved horsepower and torque. The engine in the car I drove is the 2.4-liter I4 MultiAir engine with 184 horsepower.

All of these features, combined with the 9-speed, give this car enough oomph to power down the highway, but it is also smooth enough for sailing down the street. 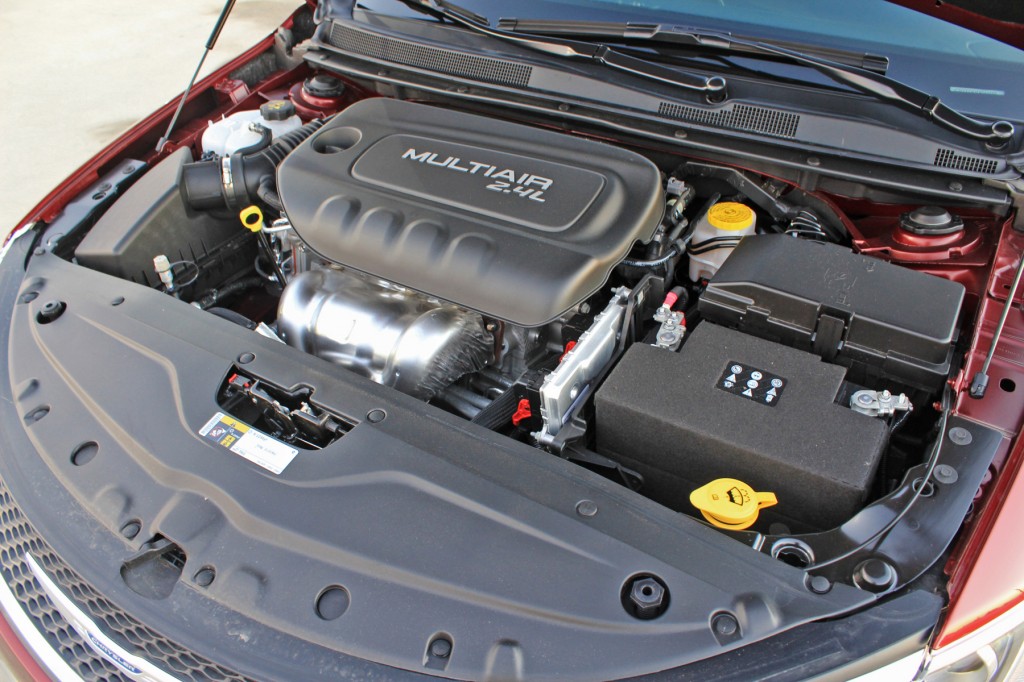 At 4,612 lbs, however, the car veers towards the heavy side, which slows it up a bit.

Also important are safety features, which have been majorly upgraded since the 2014 model. There is special, ready-alert braking and a safety rain brake for extra precautions. In addition, there are optional features for monitoring blind spots, and a cross-path rear alert system.  There is also a SafeHold electronic parking brake. This ensures that the vehicle is secured if someone removes their seatbelt and attempts to exit the vehicle while it is in motion.

The most innovative feature of the Chrysler 200C is Uconnect 5, a personalized dashboard that has Bluetooth, all kinds of apps, traffic updates, access to music, and other unique media. This feature was easy to use, as everything is touchscreen with icons lined up the bottom of the screen. Once I learned what the menu options meant, the rest came easily – I had my Bluetooth connected and my favorite Pandora station on in well under a minute.

Navigation is powered by Garmin and is built-in. There is 911 Call/Assist and voice-activated testing. The car does not have a CD player, but I did not miss it. The voice activation feature worked seamlessly. 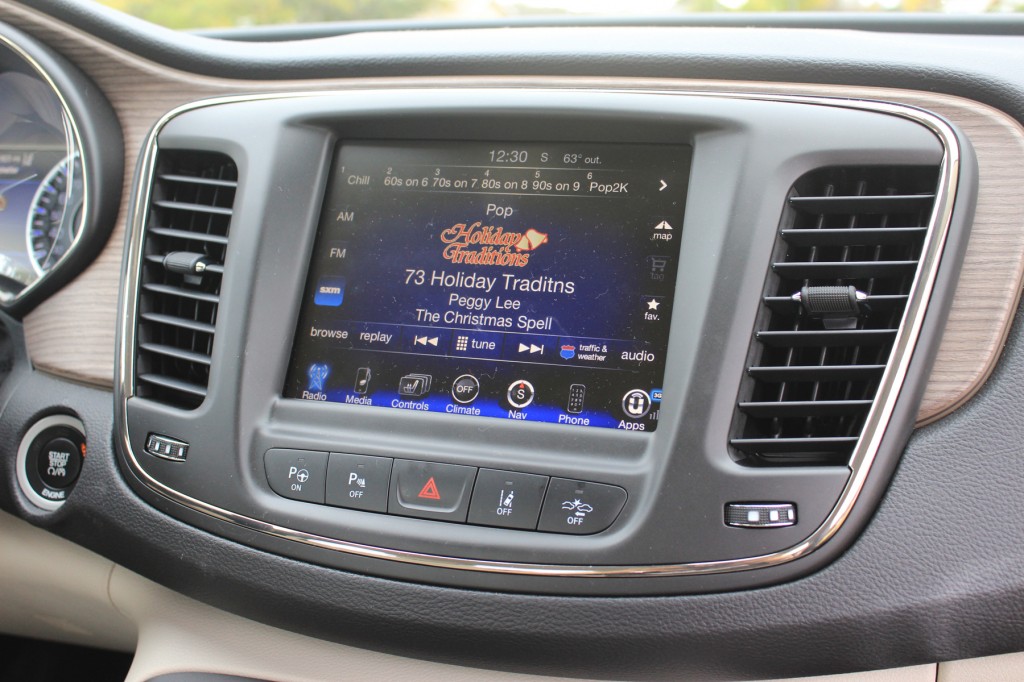 Also pioneering on the tech side is the automatic parallel and perpendicular parking, which is especially useful someone like me, who’d rather park blocks away from my destination than parallel my car. This Park Assist feature is part of a SafetyTec package, which includes more than 40 safety features.

Additional attributes include wipes that automatically sense rain, cruise control that adapts (Adaptive Cruise Control (ACC) will automatically stop the car if traffic slows down ahead), and warning before a potential collision. The cross-traffic alert system is equipped with a camera.

Included with the car is a six-speaker sound system. If you like to turn up the music, there is an option for and 10 speaker sound system with a 506-watt amplifier. This feature is made for drivers who like to feel the base while they cruise. It is a bit loud for my sensitive ears, but my passengers were all about it. 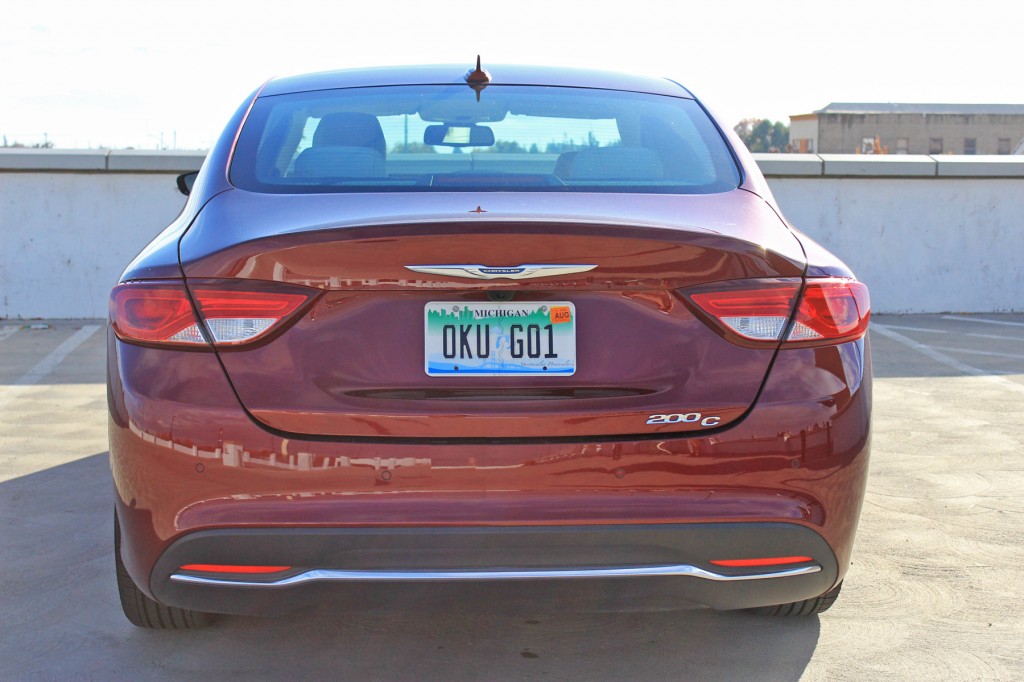 While some of the features are ordinary, the Chrysler 200C is quite impressive as a whole. The exterior is reminiscent of a high-end car, and a major upgrade from the 2014 model. The interior is attractive, space saving, and comfortable. Because the car allows for speed and safe driving, it is optimal for both families and solo drivers.

The car allows for a speedy or a smooth ride, even down city streets with potholes. At $31,700 the Chrysler 200C is both practical and affordable. The Uconnect takes this car from 3 ½ to 4 stars because the technology is that good – and fitting for a more luxury vehicle.

Written By
Victor Mosqueda
More from Victor Mosqueda
Despite its lightweight status, the 2016 Jaguar XF is feature-heavy; a new...
Read More
0 replies on “2015 Chrysler 200C”