Big first impression but not much after that

Some things change. Some never do. At the time I got the all-new Cadillac Escalade, Johan de Nysschen changed Cadillac’s entire naming structure. Just as we all became familiar with names like the CTS, ATS, SRX, XTS, and STS, when the outgoing old school names like Deville and Seville were replaced to the chagrin of many Cadillac faithful, de Nysschen turned Caddy’s world upside down. Whether you like it or not, if you ask me I’m no fan, Cadillac cars will don names such as CT6, CT4, CT (insert random number here). That is, all the cars will change their names except for the Escalade. A traditional body-on-frame SUV that made its debut in 1999 was everything American at the time; in your face, large, and superfluous in every regard. Now, 16 years later, the Escalade is still in your face, large, and superfluous in every regard.

Cadillac has always had a penchant for flair with the Escalade probably being the leader of the brand. While some past Escalades looked as though Flavor Flav threw up all over them, Cadillac reined in the bling this time around. Instead of chrome everywhere, you now have bright finished aluminum everywhere. It is a minor change that has a big impact on the car. Gone is the gaudiness of old and in with modern touches that give the Escalade an elegant yet mature look. Cadillac has their Art & Science design language down to perfection. The simplistic yet gorgeous LED light treatments on all their vehicles as well as their sensually squared off physiques are pure sex appeal. Our Black Raven Escalade with the aluminum trim was simply majestic. 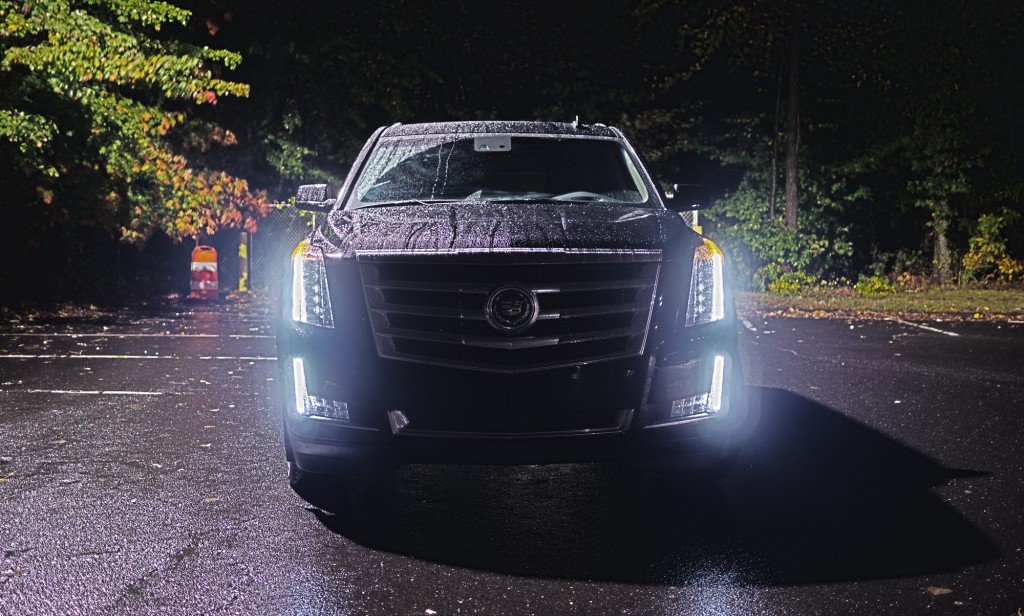 It is a tough looking ‘ute with huge proportions. Sitting on a 116.0” wheelbase with an overall length of 203.9” and a height of 74.4”, a width of 50.4”, the Caddy is a formidable presence on the road. The Escalade shows just how sexy a rectangle on wheels can be, however the only down side is that there is only so much you can do to the body of such a large people mover. It is essentially slab-sided with a subtle beltline trim. The large wheel wells house the, optioned on our tester, 22” dual 7-spoke Ultra-Bright Finish Aluminum wheels.

The rear is probably the coolest part of the behemoth with “light-blade” LED tail lights that are just too cool to view at night. Walk back to the Escalade and hit the unlock button on the key fob and you are treated to a spectacle of light with the LED blades on the headlights, tail lights, and on the door handles which make finding the doors very easy in the dark. The integrated power retractable running boards help keep the clean, albeit plain, look of the sides and deploy when you open the doors.

Having been in a few CTS and ATS cars, I have now become familiar with Cadillac’s interiors. They have standardized their interiors in all their cars which makes it easy for one to hop into any Cadillac and become used to their instrument panels. The slight difference with the Escalade is that you still have a column shifter. Keep in mind, this ‘ute is on the same platform as the GMC Yukon and Chevrolet Tahoe and shares some likeness to both. The seats are supportive and are great for long trips. The side bolsters do little to hold you in but allow for plenty of movement so you can get comfortable. The pedals are adjustable, the heated steering wheel has the tilt and telescoping feature, and the 12-way adjustable heated and cooled front seats allow you to maximize your driving position and comfort.

The second row captain’s chairs in our tester allow for 39” of legroom and 38.7” of head room, down from the copious 42.8” in the front. The second row seats are heated and can be folded via power controls in the rear cargo area. The third row is almost pointless despite the Escalade’s massive size. With their close proximity to the second row seat backs, legroom only being 24”, even children won’t be too happy sitting there. It is tighter than I had expected and the rake of the floor up to the seats takes away from your head room. If the row is entirely taken up by passengers, your rearview mirror will be of no help to you. Maximum cargo space is at a cavernous 94.2 cu. ft. however, with the third row up, space is very limited to just a couple grocery bags. Access to the rear is aided by a power lift gate that has the option of opening just the glass if need be.

The quality and finish of the Kona Brown interior was impeccable. However, the fit of the unfinished wood trim was not. The small piece of wood trim between the steering wheel and the infotainment system was loose and there wasn’t enough pushing I could do to keep it in. On either side of the dash next to the doors, the wood trim stuck out a little bit and was rather noticeable. I welcome the unfinished wood trim because it looks fantastic, especially when it was in the CTS Vsport I tested, but the poor fitment cheapened the interior. For $87,985, I expect better from a luxury marquee.

The Escalade has a standard tri-zone climate control system with their own adjustments, a rear seat entertainment system that contains a flip down LCD screen, wireless headphones and auxiliary jacks, USB ports in the large front armrest compartment as well as below the infotainment system hidden behind a sliding door compartment.

The Escalade comes standard with Cadillac’s CUE infotainment system and still has the same voice lagging issues of every other CUE system I’ve had experience with. The touch sensing system has gotten a lot better with each passing Cadillac I’ve had which makes things easier. The massive 8” display is great for visibility and clarity. I love the layout of the panel and its cleanliness but a faster voice recognition system would be great as well as a button that can turn the A/C on or off, instead of going through the menus to do it especially when driving. 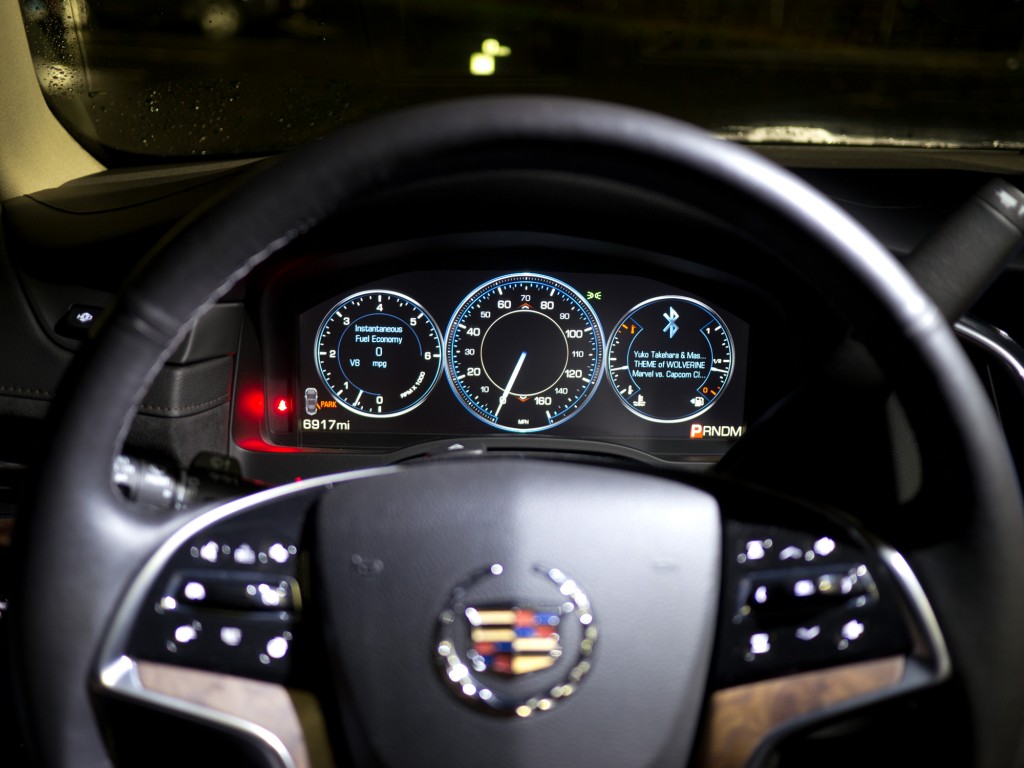 The 12” gauge cluster is all digital, just like every Cadillac, and is configurable to your liking. The digits are easily readable and visible even in the most glaring sunlit situations. The rear backup camera displays guidelines and turn with the direction of the vehicle so you know exactly where you’re backing up. The blind spot monitoring system, lane keeping system, and the driver assist package that includes the adaptive cruise control, automatic collision preparation, front and rear automatic braking and safety belt tightening, all work perfectly to help the Escalade drive like a smaller vehicle. The Escalade also has the Magnetic Ride Control that other Cadillac vehicles have now.

The 6.2L V-8 with its 420 hp at 5,600 rpm and 460 lb.-ft. of torque at 4,100 rpm is coupled with variable valve timing, direct injection and Active Fuel Management which will shut off four cylinders to save on gas in low load situations.

The aforementioned safety systems do make this large vehicle drive smaller that the size would dictate. The only difficulty I had was placing it on tight country roads and tight parking spots in a parking garage. The blind spots are minimized due to the blind spot monitoring system despite the fact that the mirrors seem a little small for a vehicle of this size. Rearward visibility is only hampered when you have passengers in the back, otherwise it provides for a great view of things that are behind you. The great part about vehicles of this size is the forward visibility due to their height. You feel secure and can see further, especially at night due to the LED headlights.

The 6.2L V-8 has torque at any rpm and will pull this giant along with ease. Despite the torque peak at 4,100 rpm it feels like a steady plateau everywhere. The Escalade has a max towing capacity of 8,100 lbs. which makes it a great vehicle to tow your nice little boat to the Marina. The EPA rates the V8 at 14 mpg city/21 mpg highway but with my location in the hilly part of Connecticut, I could only muster just over 16 mpg. On flatter ground, 17 was easily attainable with light throttle input to try to use only four cylinders instead of all eight. 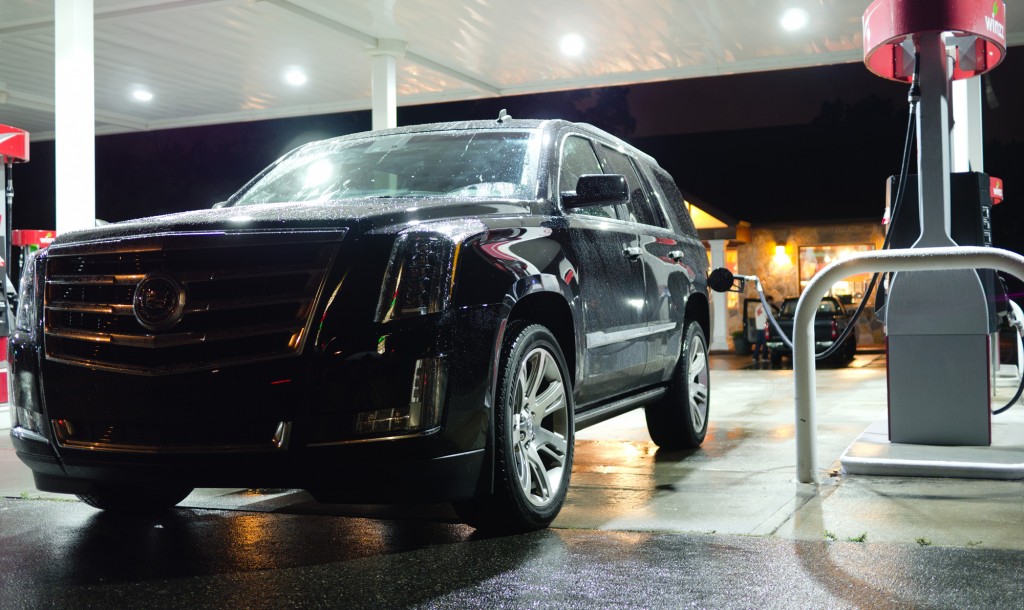 I did not have the chance to play with the 4WD capability of the Escalade and left in 2WD throughout my time with it, so unfortunately I do not have much to report in that regard. You are constantly reminded about the V-8 as you hear some engine noise enter the otherwise quiet cabin. The active noise cancelation that is standard equipment does a good job keeping outside noise from entering in but the engine drone is noticeable.

The Magnetic Ride Control, while magical in cars like the CTS Vsport and others, isn’t quite as awe inspiring in the Escalade. Body roll is minimal for a vehicle of this size and but the ride is firmer than expected, due in part to the solid rear axle while the competition uses independent front and back. While most minor road imperfections are isolated, uneven pavement or small potholes do get transmitted through into the cabin. I have tested cheaper utilities that had a more isolated ride than this which is unfortunate for the Escalade. However, the MRC shocks do well to keep the Escalade firmly planted in turns so you never truly run out of grip. The brakes grab almost immediately at the top of the pedal travel and do well to rein in the power from the V-8.

The 2015 Escalade 4WD Premium has a standard vehicle price of $82,795. Add in the Kona Brown with Jet Black Accents for $2,000, Power retractable running boards for $1,695, the 22” wheels for $500 plus the $995 destination charge brings the total vehicle price to $87,985. That is quite the ticket price however you do get a lot for the money. With how different the Escalade looks and how well it stands apart from its platform siblings, it still shares a lot under the skin. The slight interior fitment issues, the firm ride, engine noise, and tight third row make it hard to really like this large luxury people mover. If you don’t need the Cadillac badge to one-up your neighbors, GM has less expensive options for you.