The RX 350 is the sales stalwart for the Lexus brand. According to Good Car Bad Car, they sold 9,658 of them in the month of July alone. They’re currently outselling their next closest competitor, the Acura MDX by 3,375 units in just the same month! In the sales race it is like pitting Usain Bolt against a middle school kid in the 100-meter dash. Why does it sell the way it does? Since its inception in the United States in 1989, the Lexus brand has distinguished itself with reliable luxury. Now in its third generation, Lexus didn’t exactly change much in the RX 350 in order to keep its sales crown.

My tester happens to be an F SPORT version. If you are new to this name, I don’t blame you. Having driven and really enjoyed driving the IS 350 F SPORT about a couple months ago, I had a lot of high hopes for the RX 350’s version of it. Unfortunately, my hopes and dreams were shattered regarding the “F SPORT” part. Then again, based on their target demographics, “sport” is the last thing on their minds. So, let’s forget the “sport”. You don’t need it, nor should you want it. The number one selling luxury SUV in its segment doesn’t need it to get sales. It is a superfluous option box that doesn’t give much in return for what it promises. However, everything else about this crossover is spot on for its target market. Here’s the breakdown… 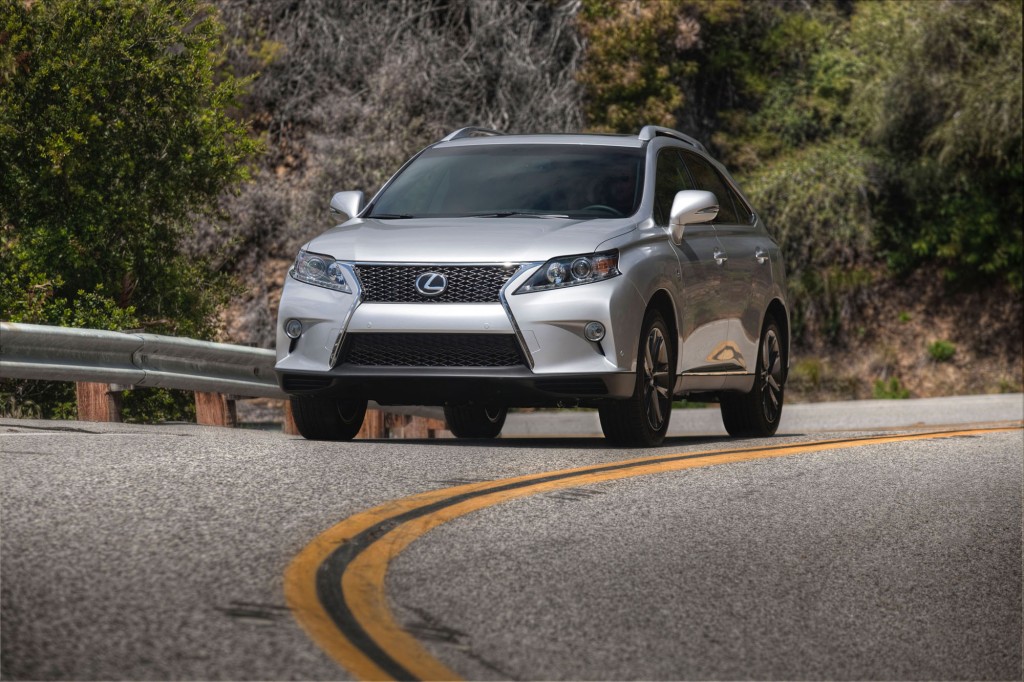 I always try to point out that looks are subjective and I can only offer my opinion on them so, in my opinion, the RX 350 F SPORT looks a little busy in the front with the spindle grille that graces every current Lexus. It tries to go for the aggressive look but it looks a little messy. The side profile shows the size of the cabin with the larger doors and the tapering of the D-Pillar which gives off the impression of cutting into useable cargo space.

The nice 19-inch Dark Graphite Finish aluminum alloy wheels do a good job of setting it off as an aggressive vehicle but just enough so that it doesn’t take away from the goal of the Lexus as a family vehicle. The rear is more “boring” than the front and keeps to a simple design. Overall, the exterior is not as clean as the generation it replaces but it is not as simple either. The Deep Sea Blue Mica (a dark blue) is a very elegant looking color but the dark wheels make it look darker than it is which may be a turn off to some. The blue is a very mature color and works well on the RX. 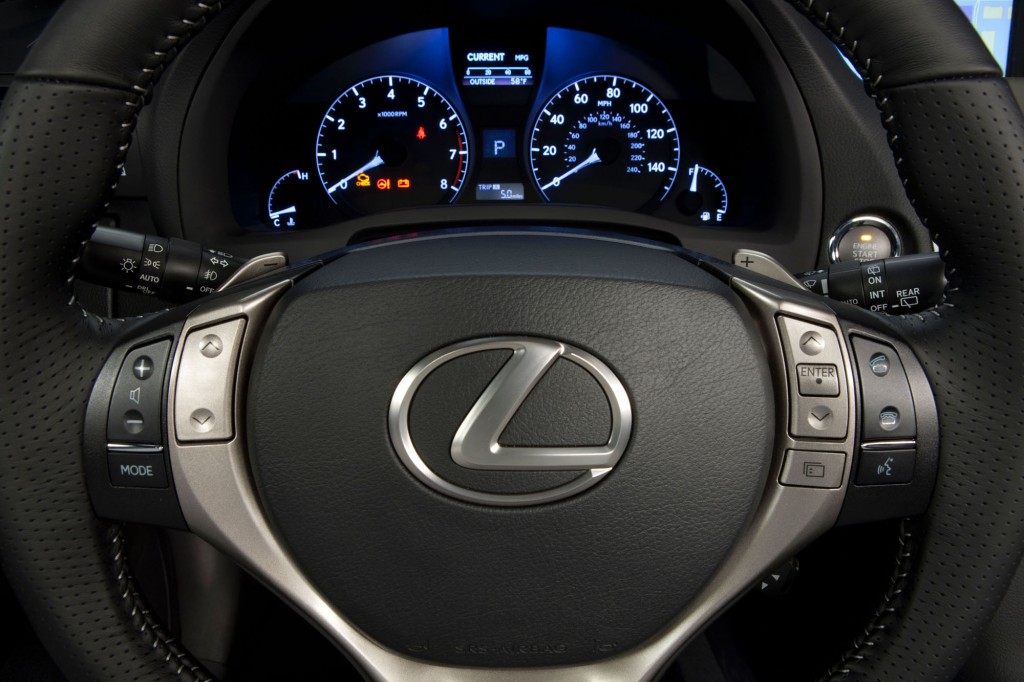 Lexus interiors have always been warm and inviting, especially in the ES and RX. This is no different. The seat bottoms are fairly flat which allow easy ingress and egress. You don’t climb into the seat, nor do you fall in it. Once you set it to your comfort level, you just slide in. Everything is within a short arms reach away which is ergonomically fantastic. Everything your hands touch is soft or padded with minimal plastics relegated to lower parts of the car that people don’t normally notice. The gauge cluster ahead of you is well lit and the numbers are easy to read.

The center stack is a love-it or hate-it design with its curvaceous instrument panel. The buttons are small and take a little getting used to, but once branded into your brain, it is fairly second nature. The Lexus Infotainment system does take some learning and can be frustrating to use on the fly. The LCD screen is not touch capable so the only way to surf through the various menus is to utilize the “mouse” and buttons located on the center console. Thankfully, navigation inputs can be dictated via voice commands using the voice button mounted on the steering wheel which makes things significantly easier.

The HVAC controls are simple but if you wish to turn off the AC you need to peruse through the infotainment system and get into the climate control menu in order to turn it off. It can be a nuisance for many if you don’t like the AC on all the time. The adjustable driver’s seat and tilt and telescoping steering wheel allow for supreme comfort based on your driving position. The front passenger seat is also powered and the driver’s seat is heated and cooled as well. The second row is spacious and with my driver’s seat adjusted to my liking, I found a copious amount of space and ample legroom. 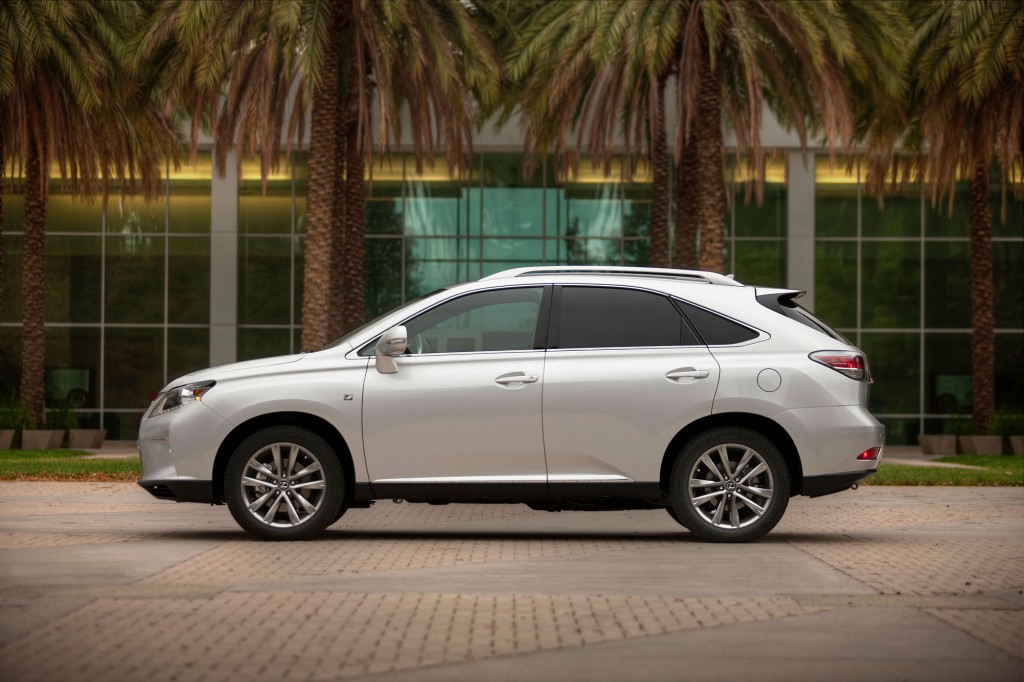 The rear bench is just that, a bench. It isn’t two recessed bucket seats joined together by a taller middle row seat. It is fairly flat which makes it easy to get into and slide into whatever position you wish to be in. In addition to that, the seat back will recline slightly aiding in relaxation as you or your passengers are driven to your destination. The leather on the seating is well padded. The cabin is whisper quiet and incredibly isolated from any outside noise. Only very slight wind noise can be heard at high speeds but I can’t imagine this car seeing those speeds very often.

The cargo space is respectable but multiple boxes may have an issue fitting in if you have to stack them due to the tapering rear glass. To relieve that issue, the second row folds flat to allow for maximum cargo volume of 80.3 cubic feet. The rear hatch is powered so you can open or close it with just a touch of a button.

A couple nitpick items are the analog clock in the center stack and the computer display in the gauge cluster being a couple generations too old. I feel that in a luxury vehicle such as this, these two out dated pieces of tech have no place in a luxury car and should only be relegated to compacts and sub compacts where they are seen more often. 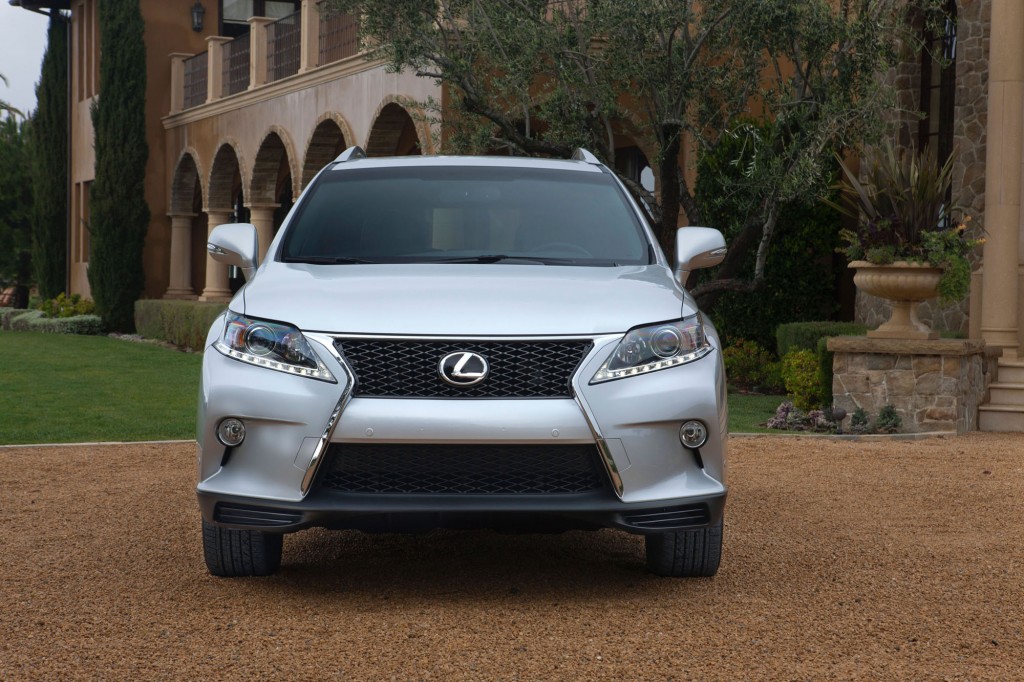 The direct injected V-6 is a carryover from the previous generation with a few updates. The power is at a respectable 270 horsepower at 6200 rmp and torque is at 248 lb.-ft. at 4700 rpm. The F SPORT’s numbers are identical every other non-hybrid version of the RX crossover. It is mated to an 8-speed automatic which delivers smooth and imperceptible shifts. The eight ratios provide plenty of play for the transmission to get you to the highest gear possible given your load in order to obtain the best fuel economy possible. Having said that, first gear is incredibly short and a slightly aggressive tap on the throttle from a stand still will jolt the RX forward. Some slight foot work is necessary to adjust for it but it transitions to a smooth cruiser soon after.

The F SPORT is said to have a unique F SPORT tuned suspension, whatever that is, to give it a sporty feel. I will go on record and say that it fails to deliver on its promise. The ride, while well controlled, is soft and there is more body roll than expected with an “F SPORT tuned” suspension. It is not a corner carver by any means but it isn’t exactly an interesting ride either. It is very isolated which is not a bad thing given what this car’s mission is. The steering further aids in the isolation with zero feel and feedback. It is very light and easy to turn in low speeds, especially parking lot maneuvers, and will stiffen up at speed. The tight turning radius of 38.8 feet is a boon to have especially in tight parking garages and makes the RX feel smaller than it is. The 4-wheel disc brakes are soft but linear in stopping force and do a good job of slowing and stopping 4,510 lb crossover.

The AWD system in the F SPORT makes the RX feel sure footed. It even has a locking feature that will keep it in locked in AWD for those harsh snow storms or when crawling over shopping carts at your local Macy’s. While it is not a fast vehicle by any means, it has a respectable 0-60 of 7.7 seconds and a “top track speed” of 112mph, it gets you where you want to go in the most comfortable way possible.

Driving the car is a rather easy task as blind spots are minimal and aided via the standard blind spot monitoring system. The backup camera is standard fare as well as the parking sensors which make sure you are not close to trading paint with cars parked next to you. It is an easy vehicle to place and comfortable to drive which helps explain why it is the great seller that it is. 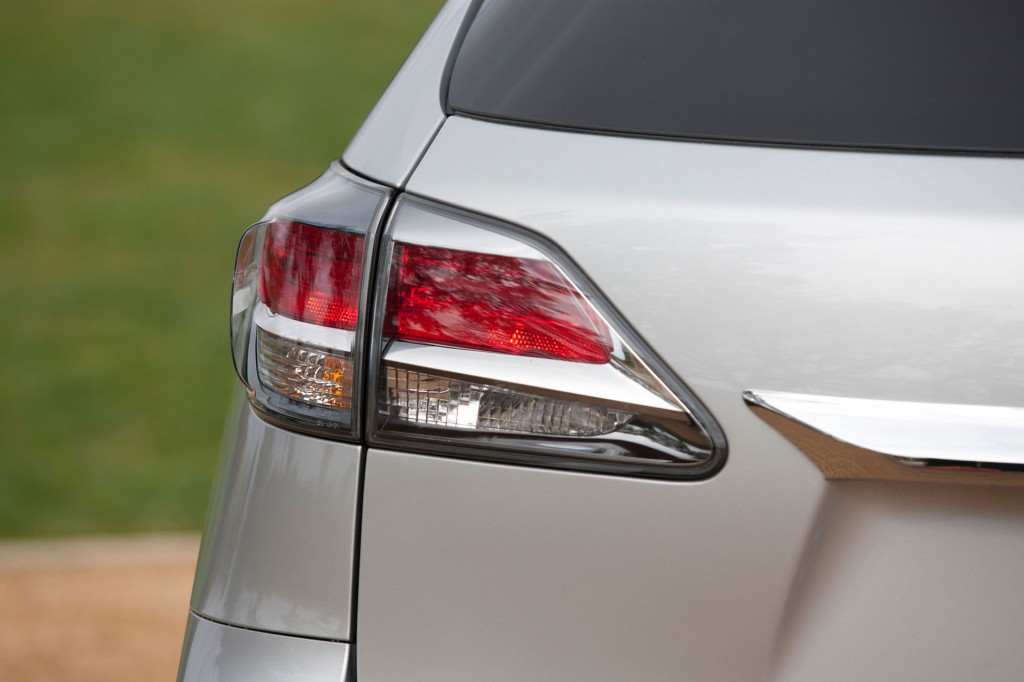 My Deep Sea Mica tester came in at an as tested price of $52,614.00. The standard features include everything you’ve come to expect of a vehicle in this category with all the requisite safety features and tech such as LED Daytime Running Lights, 10 Airbags, Power moon roof, a Lexus 12 speaker Premium Display Audio System, etc. The options include a Blind Spot Monitoring System for $500, Lexus Navigation System and all its unique features for $1,915, Intuitive Parking Assist for $500, and Cargo Mat, Cargo Net, Wheel Lock & Key Glove for $254. Add it all up to the base price of $48,535 along with the $910 Delivery Fee and you get to our grand total. My recommendation is that if you don’t need the F SPORT package in order to feel “special” or “distinct” save your money and opt for the non F SPORT versions. You get 9/10s of what you see here for less money.

Sport is not in its genes, nor has it ever been since the RX debuted all those years ago, because it simply doesn’t need it. There are other vehicles in this category that deliver sport in such a better package that you should look elsewhere for a sporty crossover. However, there is a reason why the RX sells in the numbers it does because it does everything else so well. Lexus kept it simple and didn’t change a whole lot as the main ingredients are still there. Want proof? Look at sales numbers or your local mall parking lots. The wrapper is different but much has remained the same which helps this ‘ute sell as well as it does. So far, in my book, Lexus is one for one in the F SPORT category.