K900 climbs to the pinnacle of luxury

The Kia brand has come a long way. From the Korean car company’s beginning as a bare-boned budget brand to where they are now offering a refined, luxury sedan. That’s right, I said luxury and Kia in the same sentence. My tester this week shows why those two words go together now.

The 2015 Kia K900 is a brand new vehicle that will challenge Lexus, Acura and Infiniti and also keep up with their Korean brethren over at Hyundai (who also offer the similar Hyundai Equus).

If you were comparing the sedans in a car version of the Pepsi challenge, you’d rank the K900 right there with all those other brands. The only hold up would be the lack of appeal and luster in the Kia badge. Nobody proclaims, “I finally got my dream car and I’ve made it. I bought a Kia.” But the K900 could change that, or it will at least put another feather in Kia’s hat. 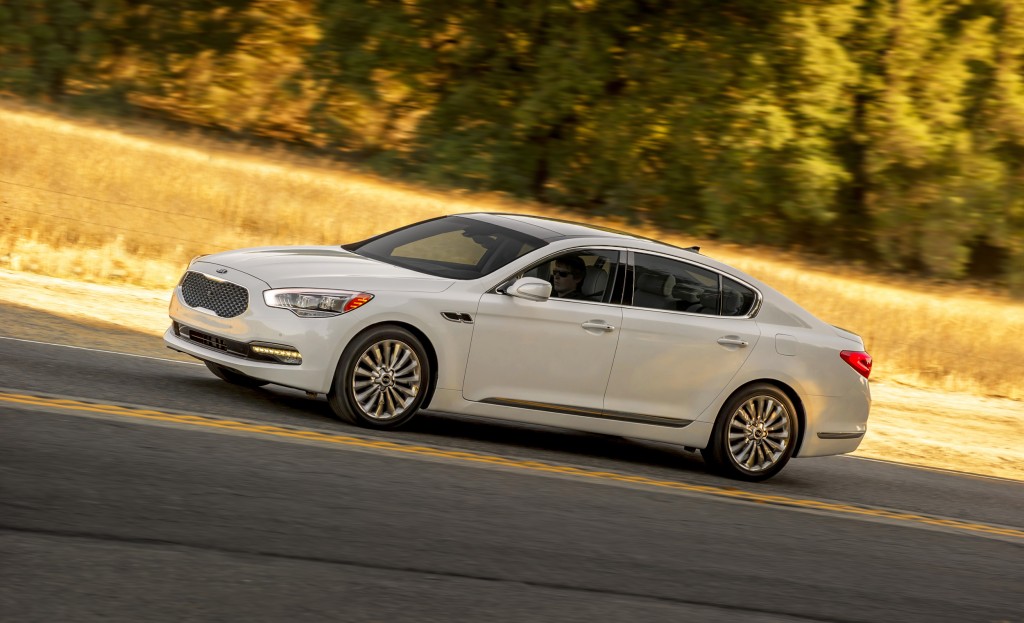 On looks alone the K900 has a European appearance. Upon first glance of this luxury sedan and it looks like a BMW. Between the two Korean carmakers, I’ve always liked Kia’s design styling slightly better than Hyundai, and when comparing the K900 to the Equus (of which I’ve also driven), I find the K900 to look distinctive and luxurious. The sexy grille is not overly aggressive and it lacks too much frilly design. Instead it relies on sleek, sexy lines to sculpt out its frame and overall appeal.

A 5.0-liter gas direct injected V-8 engine powers the K900. The impressive power is assisted by an 8-speed automatic transmission, which offers well-timed and flawless shifts. The Kia K900 has 420 horsepower.

It’s not a muscle car, it’s a luxury sedan, and it conducts itself as such.

There’s just enough of an engine tune to make an aggressive whirl when you drive the K900. It’s not a muscle car, it’s a luxury sedan, and it conducts itself as such. 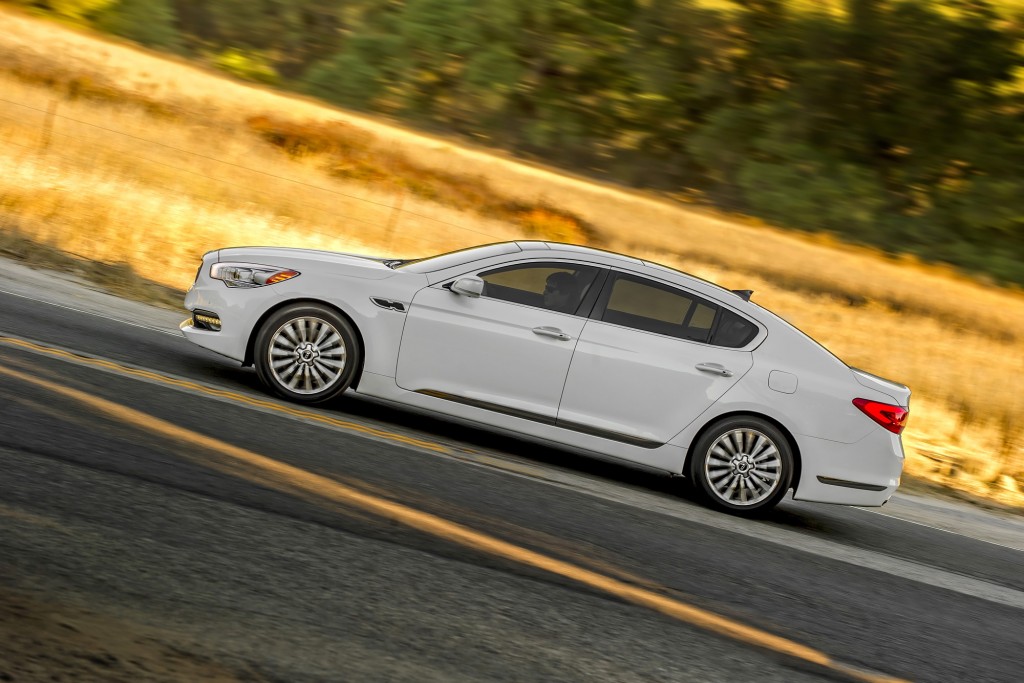 The rear-wheel drive sedan has a smooth, quiet ride. The steering is not very responsive, which is about the only flaw with the overall drive performance. For those who like European luxury cars, they may not be impressed, but otherwise, the K900 has one heck of a smooth driving, powerful car.

Inside, the refinement and luxury continues.

Kia says a V-6 engine will be offered in the near future, but why cut down on one of the K900’s biggest assets, which is the power and performance.

Inside, the refinement and luxury continues. It certainly has more luxury and better touch points than any other Kia out there (although I’ve always liked the quality interior of the Kia line). If someone didn’t know they were inside a Kia, they’d think they were inside a fine European car. The K900’s interior is even more luxurious than most Lexus and Acura vehicles. 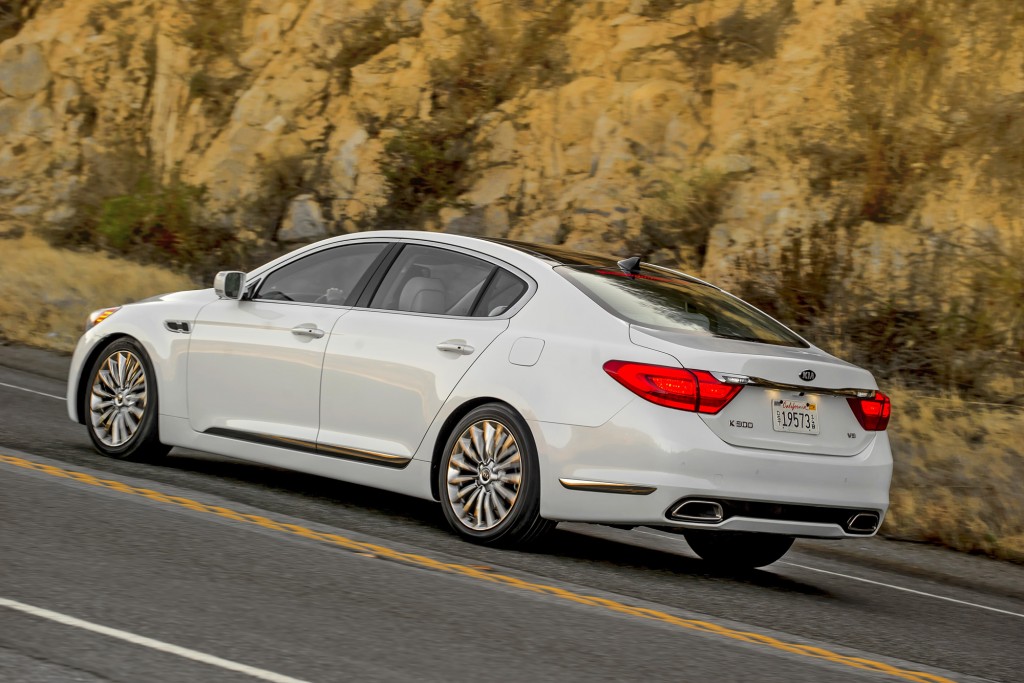 This kind of technology is impressive and what you expect from a high-ticket, luxury vehicle.

The K900 is rich in technology too (which I love). A 9.2-inch navigation screen is standard, however my tester came with an upgrade to a 12.3-inch full LCD instrument cluster. When in reverse you get a full birds-eye view of your surroundings. It’s much more than just a rear camera. You can literally see what’s all around, which helps with parking. This kind of technology is impressive and what you expect from a high-ticket, luxury vehicle.

The cabin is spacious for all passengers. Rear passengers will not want for shoulder or legroom. The K900 would make an excellent executive vehicle as such. That is probably the desired demographic for the K900, and they succeed in offering Town-car like comfort in the back seat. 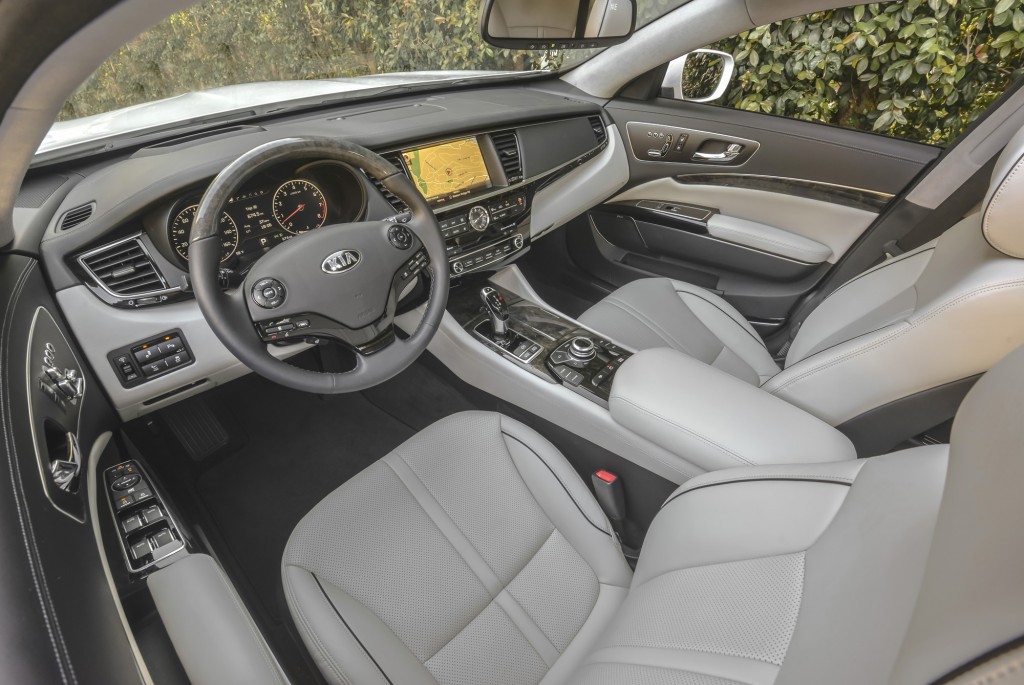 Fuel economy is what you expect from a big V-8 engine. The Kia K900 has an EPA rating of 15 citiy and 23 highway. You’ll be hard pressed to get that 23 barring any drafting or hypermiling tricks. In a week’s worth of mixed driving I averaged 18.1 mpgs.

Starting price for the K900 is $60,000. There is only one trim offering, but several different packages you can add on. My tester had the VIP package, which included the 12.3-inch screen, power reclining rear seats and adaptive cruise control. My tester had a final price of $66,400.

With the already superior Optima, the K900 takes the success to a higher level.

With the K900, Kia continues its winning ways. With the already superior Optima, the K900 takes the success to a higher level. A level they’ve not been before. The air might be rare (and rich) where the K900 is, but it most certainly fits in.