We’re not even halfway through 2014, so it seems premature to talk about 2015, but let’s do it anyway. My tester this week is my first vehicle from next season’s model year.

The 2015 GMC Yukon XL is a full-size SUV that might as well fall in the luxury category, although it’s not technically.

I was fortunate to be given the Yukon to drive during a week where I had to travel to Chicago and back, racking up hundreds of miles on the trip. And boy was this vehicle well suited for such a road trip. Quiet, comfortable, powerful and reasonably fuel efficient (for its size), the Yukon made an excellent road companion.

For 2015, the Yukon is completely redesigned including all-new looks and a new, more fuel-efficient engine.

For 2015, the Yukon is completely redesigned including all-new looks and a new, more fuel-efficient engine. Sharing the platform with its GM brother the Chevy Suburban, the Yukon still manages to bring something else to the table that the behemoth Suburban can’t. Different in looks and interior quality, the Yukon is its own vehicle. 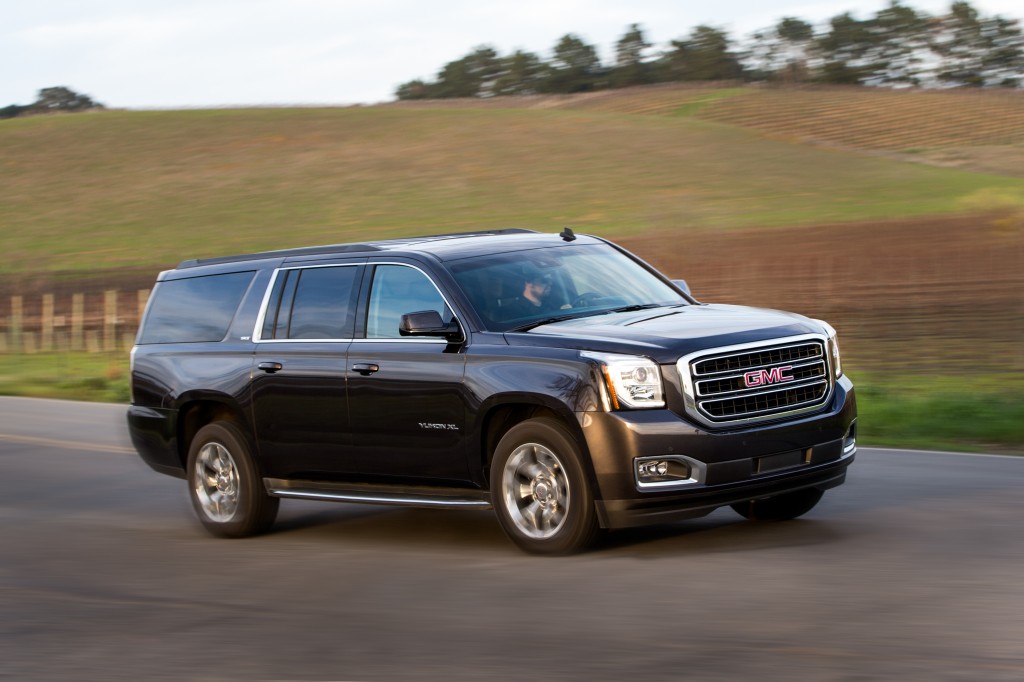 The only thing that could make this vehicle better is if GM had brought back the vehicle under its previous name badge (the GMC Jimmy). That’s such an awesome name, but I digress.

Sharp and handsome are two words that best describe the new appearance of Jimmy, err I mean the Yukon. The Yukon’s stout appearance has a downplayed elegance to it. Inlaid doors are both attractive and contribute to the Yukon’s quiet ride. Often, full-size luxury SUVs have garish styling to show off and make its luxurious appearance obvious, but the Yukon is more subtle in its styling, and in this case, less is more.

Sharp and handsome are two words that best describe the new appearance of Jimmy, err I mean the Yukon.

But you can’t judge the Yukon’s engine by looking at numbers on a paper. This vehicle is a perfect example of where a quick test drive will tell you everything you need to know. 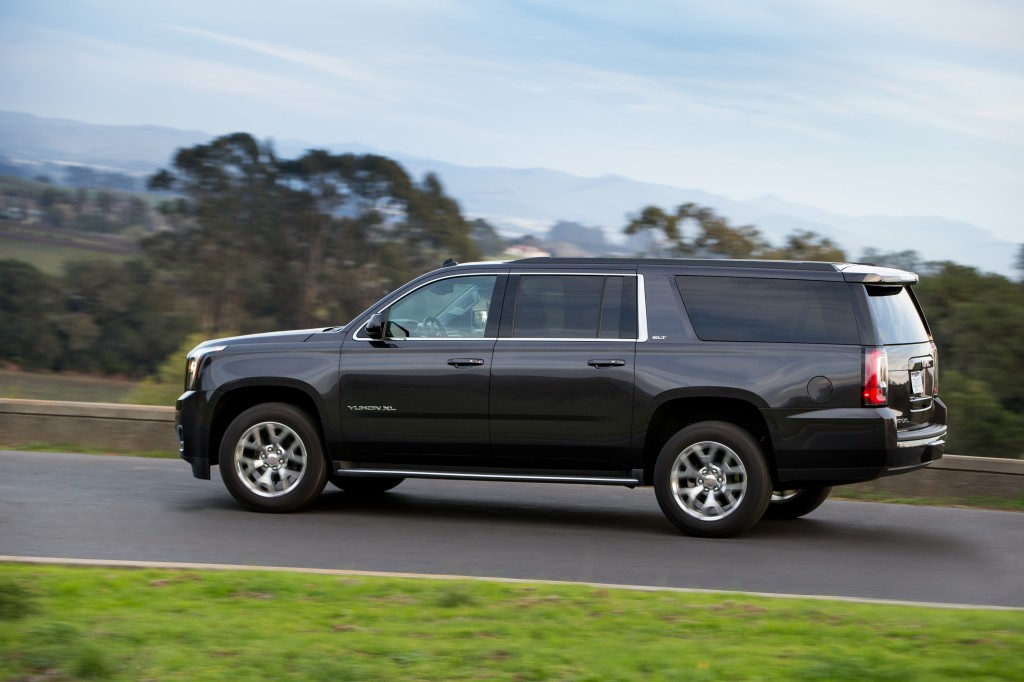 Indeed, the 2015 GMC Yukon offers one of the most comfortable, luxurious, relaxing driving experiences I’ve had in a large vehicle. It’s the ultimate road trip vehicle for this reason. The power output is exactly what is needed, nothing more and nothing less. And the Yukon can still hold its own for towing with a maximum capacity of 8,000 pounds.

With this kind of versatility, the Yukon makes an excellent weekend warrior too!

Inside, an updated interior reflects modern touches, a reorganization of the center gauges and new fold-flat seats in both the second and third row. Soft materials are found throughout my tester, the Yukon XL. Draped in quiet comfort and surrounded by modern technology including an 8-inch touchscreen system that drives the infotainment (including the dual DVD systems), the driver has an easy-to-use system that allows for intuitive placement of all gauges as well as voice commands.

Kudos to GM for integrating Siri Eyes Free system for iPhone users. I was able to do a lot with this system, including text, without having to take my eyes off the road. 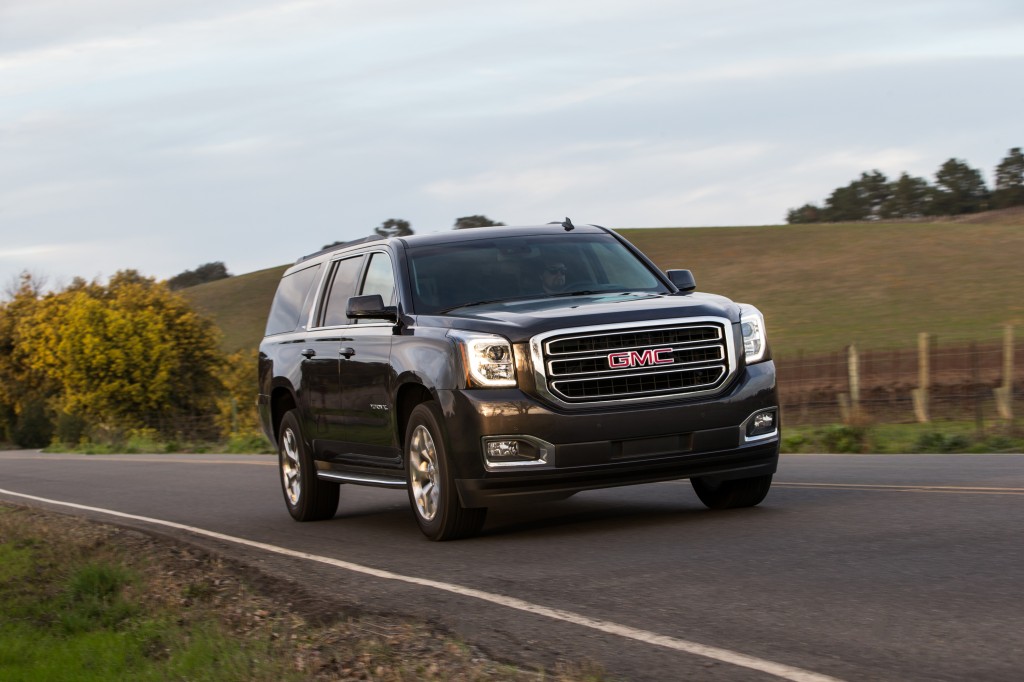 The Yukon has seating options that could fit up to eight passengers. Second row space is ample and just as comfortable as the front row. Legroom abounds so legs can be stretched during those road trips. The third row is probably best suited for smaller passengers, as due to the new fold-flat latch system, headroom is sacrificed.

The Yukon is offered in three trims including the SLE, SLT and Denali. My tester was a longer and more detailed special Yukon called the XL. It has a wheelbase of 130 inches and is 224.3 inches long. And there is nothing dainty at all about the all-wheel drive Yukon XL. The Yukon XL also comes with a top-of-the-line Denali trim (which also brings it with an ultra powerful 6.2-liter engine).

The 10 percent fuel economy improvement seemed obvious as I only had to refuel this vehicle once during my 600+ mile round trip.

The 10 percent fuel economy improvement seemed obvious as I only had to refuel this vehicle once during my 600+ mile round trip at a cost of around $75. I averaged almost 20 mpg during this trip, which was almost all highway. The Yukon XL has an EPA rating of 16 city and 22 highway. 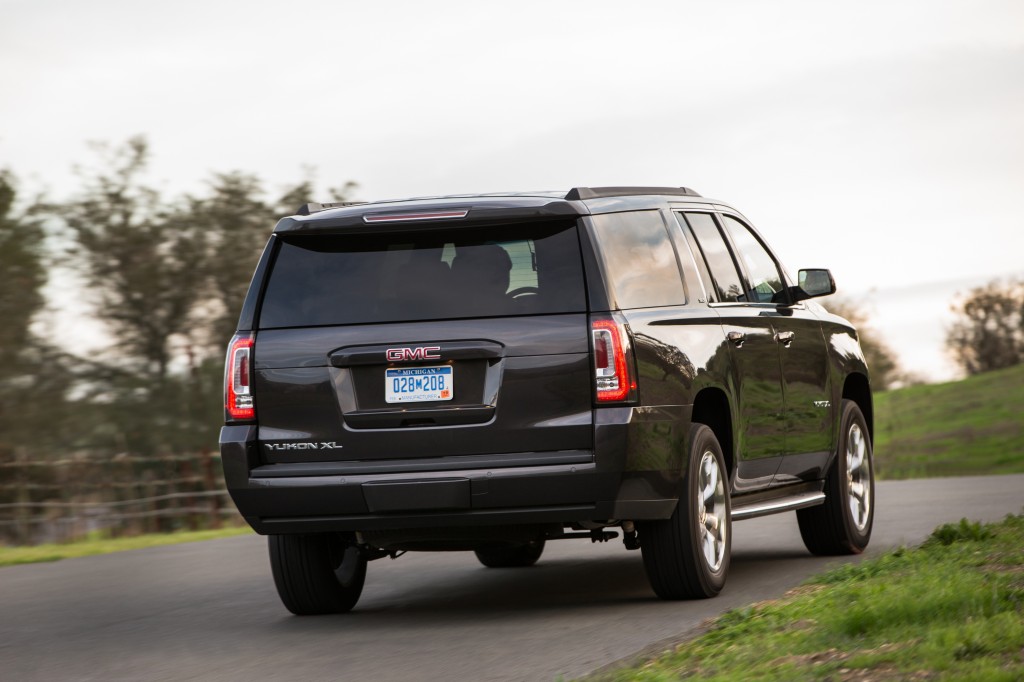 If you have to travel, you might as well travel in luxury and style.

If you have to travel, you might as well travel in luxury and style. And the 2015 GMC Yukon XL certainly has that.