You don’t want a heavy-duty pickup truck to be wimpy. And within this segment there’s plenty of workhorse trucks that are up for the task of hauling, towing and weekend warrioring. My tester for the week is not so much a workhorse as a work Ram.

The 2014 Ram 2500 Big Horn is near the top of the heavy-duty truck world – and for good reason. My tester was the stout and rugged Big Horn Crew Cab. And it might’ve been better named Gigantic Horn Crew Cab because it was a mammoth truck. And calling it a Crew Cab doesn’t do it justice either, unless you’re talking about the Crew to Game of Thrones.

Calling it a Crew Cab doesn’t do it justice either, unless you’re talking about the Crew to Game of Thrones.

Indeed the Ram 2500 is a massive truck with massive interior space. Even the engine is (what’s the word I’m looking for here) . . . massive.

In fact, my tester had the 6.4-liter V-8 Mid-Duty Hemi engine, which is one of the new additions to the Ram truck line this year. When most think heavy-duty trucks, they think diesel. And there is a diesel option in the Ram 2500 in the form of a Cummins turbo-diesel engine. 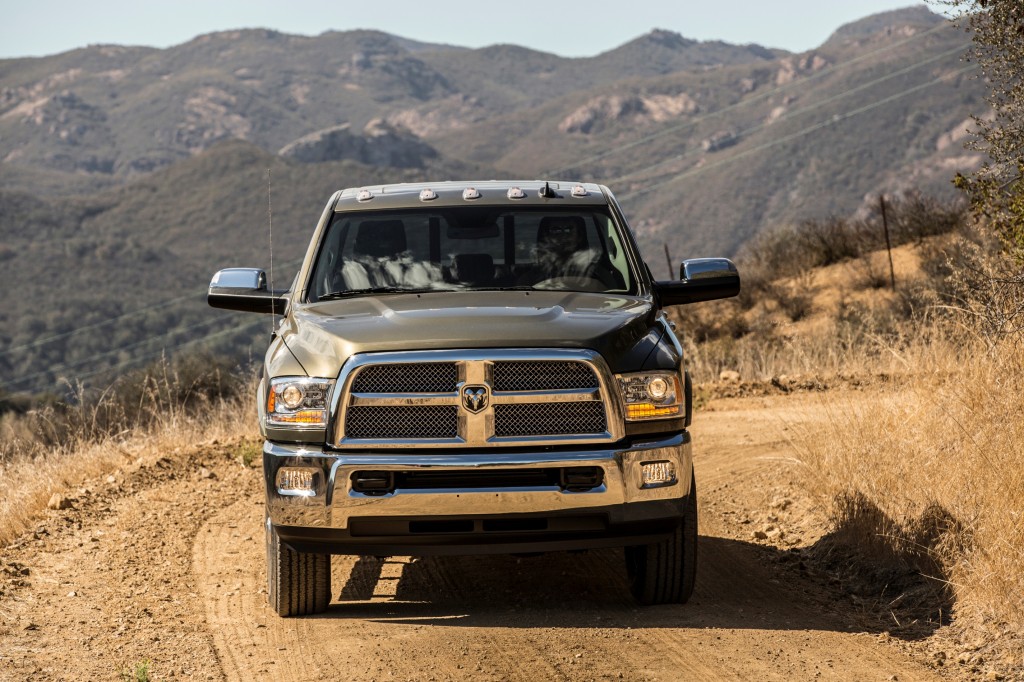 If you could describe what you want a big truck to look like, you’d likely end up describing most of the features of the Ram 2500. Stout, sturdy, rugged, masculine – those are just a few of the adjectives to describe the appearance. A shiny, chrome grille with that big Ram icon centered in the middle is far from subtle. The rest of the fit and finish lacks many frills or over styling. Rather, it’s pretty stereotypically a truck – big front end, simple side paneling, and a truck bed with more Ram badging and chrome on it. My tester was a short bed, but there’s a full-size bed option as well.

As mentioned, Ram introduced a third engine option to the line this model year. A 5.7-liter V-8 engine is the standard engine for the Ram heavy duty, but now there’s the 6.5-liter V-8 engine to go along with the diesel option. This 6.5-liter engine is big and full of horsepower and torque. It makes 410 horsepower and 429 lb.-ft. of torque. And the Ram 2500 is capable of towing more than five tons. It’s chock full of powerful ability. It’s mated with a 6-speed automatic transmission that is quite capable.

Stout, sturdy, rugged, masculine – those are just a few of the adjectives to describe the appearance.

Controlling this much engine can be daunting. And despite it’s mammoth girth, the Ram actually handles itself quite spryly. For such a big vehicle it’s rather refined. The road noise is limited and passengers won’t even hear much from that big Hemi engine. 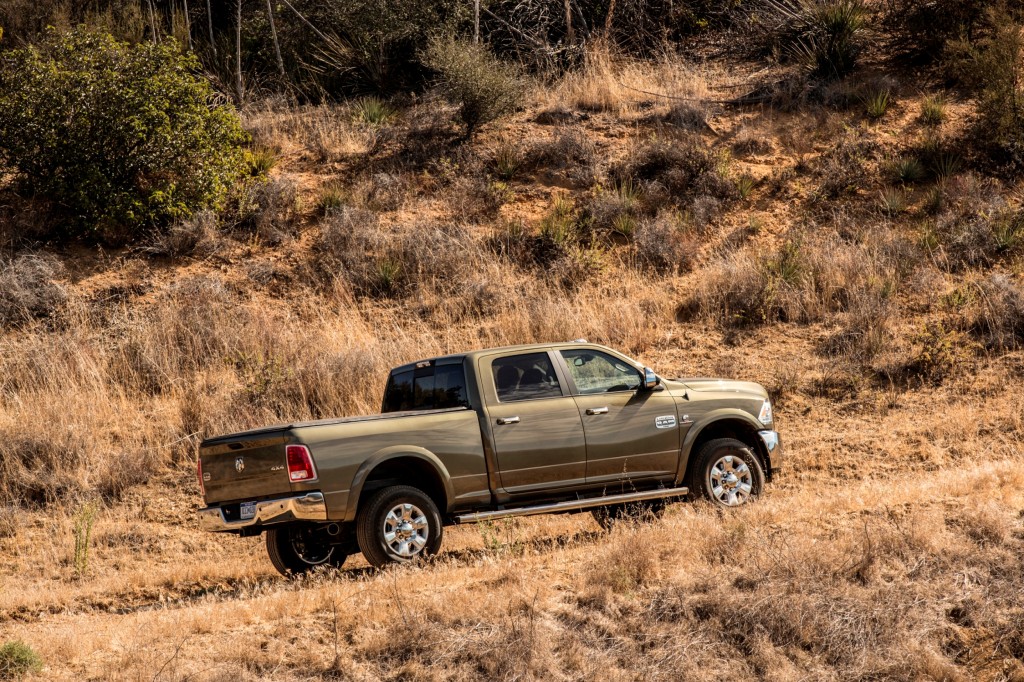 That all goes hand-in-hand with the refined interior of this truck. Soft touch points are found throughout. It’s as luxurious and high-end as even its rival the GMC Sierra. The second row is beyond cavernous as you could practically fit a third row of seats in the space between the front and back seats. Enjoy the legroom, headroom and comfortable leather seats.

Obviously, this truck is not meant to be a daily commuter, even though it is up to that task from a comfort standpoint.

The side mirrors are gargantuan, and protrude out so far it almost feels like wings. This makes parking difficult as they don’t slide in, and only fold completely down. And you’ll need to fold them down in order to fit in many spots. While it’s good for towing heavy loads behind the truck, for non-towing driving, it is overkill.

Fuel economy ratings by the federal government have not been provided yet for the Ram 2500. But, needless to say, it will fall into the guzzler category. A vehicle this big simply won’t spare you from trips to the gas station. In a week’s worth of driving, mostly on the highway, I averaged around 15 mpg. Obviously, this truck is not meant to be a daily commuter, even though it is up to that task from a comfort standpoint. 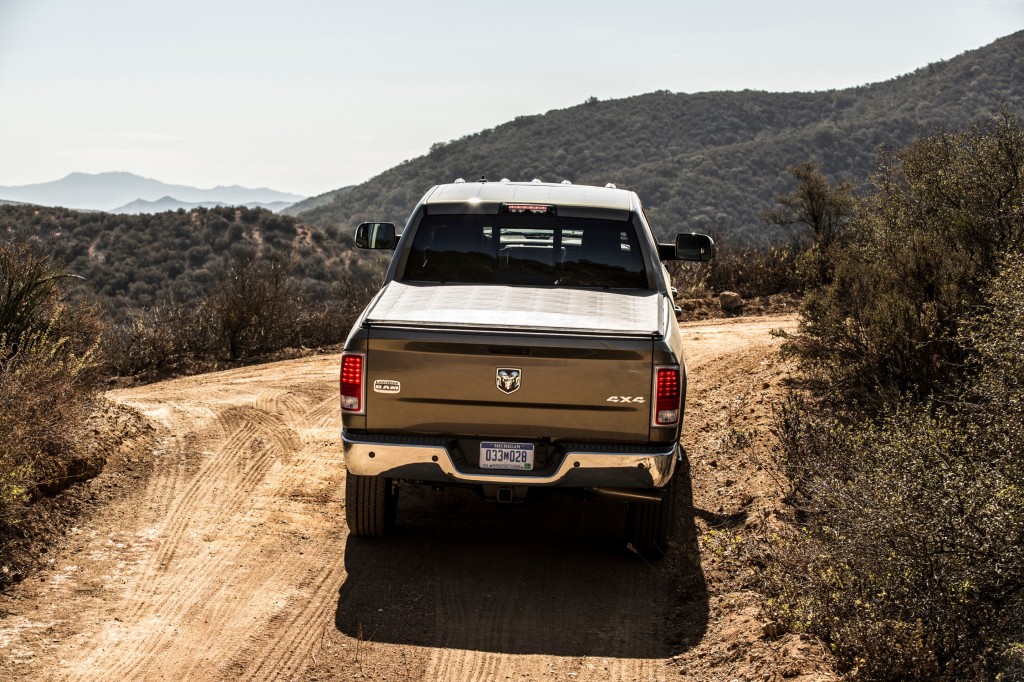 The base trim Ram 2500 starts at just around $30,000, which is quite reasonable for such a stout, durable worker. But my tester had a starting MSRP of $40,815. With plenty of added options and creature comforts, my tester had a final price tag of $49,965. The diesel version of the Ram can exceed $50,000. But again, consider the purpose of this truck is to haul and tow a recreational vehicle or a boat, and do so with style and comfort.

Strong, capable and big, this truck is ready to contend in the heavy-duty truck category.

Ram, a division of Chrysler, does an excellent job of marketing itself independently as a rugged, masculine brand. Nothing epitomizes that more than the 2014 Ram 2500. Strong, capable and big, this truck is ready to contend in the heavy-duty truck category.

Written By
Jimmy Dinsmore
More from Jimmy Dinsmore
There’s a phrase many of the young people are using that applies...
Read More
0 replies on “2014 Ram 2500”