I like a Buick. I’m 26 years old, and I like a Buick. No, I’m not under the influence of any narcotics at this time, either. If you’ve read my previous review of the Buick Verano, you know that I enjoyed driving that car quite a bit. Despite the abundance of chrome, the car was just a nice driving, nice riding, spacious compact. One of my complaints about that Verano was that it could have used a little bit more power. GM seems to have heard and has provided a remedy. Enter the Buick Verano Turbo.

Put our White Diamond Tricoat Verano Turbo model and its more docile version side by side and you won’t be able tell the difference between them. Exterior wise, they have the same chrome treatments over the tail lamps, door handles, fog lights, and of course, those trademark Buick fake hood vents. The interior remains the same also, as the Verano Turbo tester had the same Chocochino interior as the non-Turbo version. The only differences are the rear lip spoiler on the trunk, as well as a dual exhaust and a red T placed next to the Verano badge on the trunk. For those of you who love sleepers, eat your heart out. Standard on the Verano Turbo are 18” wheels, rear vision camera, blind zone alert with cross traffic alert, keyless ignition and standard Buick Intellilink with Pandora and Stitcher. 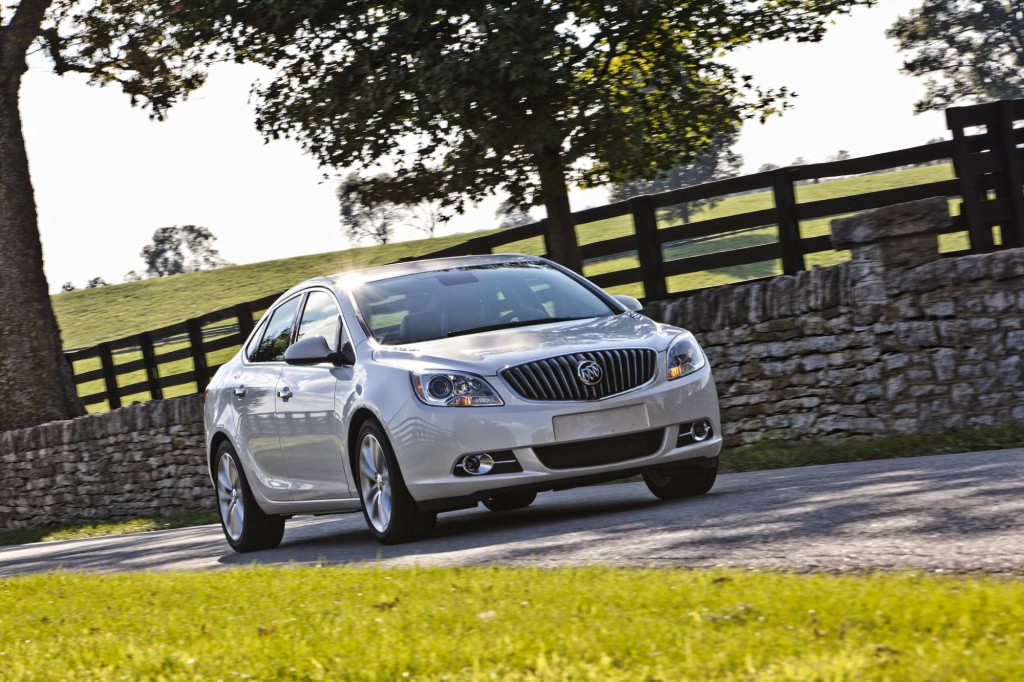 GM has a knack for taking powerful engines and stuffing them into cars you wouldn’t expect and the Verano Turbo is no different. They pretty much took the engine out of the Regals GS, which was named one of Ward’s 10 Best in 2012, detuned it and fitted it under the hood of the Verano. With 250 horsepower @ 5300 rpm and 260 lb.-ft. of torque @ 2000, this Buick accelerates with so much force that it would make the GNX of old proud that someone in its family tree still has some cojones. GM claims that the Buick Verano Turbo will accelerate from nil to 60 in 6.2 seconds.

This Buick accelerates with so much force that it would make the GNX of old proud that someone in its family tree still has some cojones.

Its bigger brother Regal GS is claimed to hit the mark in “under 7 seconds” however, the Verano Turbo feels faster and to be quite honest, with a 400 plus pound advantage, it probably is. Our test car was mated to a 6-speed autobox which delivered quick yet smooth shifts both up and down. The automatic can be shifted manually if you pull the lever towards you to activate the Driver Shift Control, then you push up for up-shifts and pull down for down-shifts. I think it shifts better when left in Drive where the algorithms for step downs into the lower gears feels perfect. I am a fan of manuals and would have liked to test one out for comparison but I don’t have any complaints about this automatic.

Much like the tamer version, the Verano Turbo doesn’t provide much feedback from the steering wheel. Turn in feels good and the load is linear but it all feels artificial. The car still feels a little heavy but the powerplant more than makes up for it. Put your foot on the brake, depress the accelerator slightly to spool the turbo then release the brake and floor the throttle and you will leave a nice strip on the road. Only one strip though, the Verano Turbo doesn’t have a limited slip differential. At first both wheels will slip but as one gets the grip, the other just spins.

Much like the tamer version, the Verano Turbo doesn’t provide much feedback from the steering wheel.

GM says that the Verano Turbo uses brake override technology which limits engine power when the accelerator and brake are depressed at the same time but it didn’t seem to make much of a difference. There is very slight torque steer, which I happen to like in a front driver, but it doesn’t feel as if the wheel is going to rip out of your hands. The StabiliTrak and traction control systems do a good job of keeping the car planted and the 4-wheel disc brakes with ABS bring all the fun to a halt quickly. The brake pedal is linear in its application of force and doesn’t feel vague.

I had the fortunate opportunity to take the Verano Turbo on a road trip to Speed1 in Lenhartsville, PA to pick up my lovely little rebuilt rotary engine. The trip to there from Bethlehem, CT is roughly 4 hours. Much like the non-turbo tester I had last year, the turbo is just as quiet and refined. With my iPod plugged into the USB jack, blaring out 2Pac, my trip was very relaxing. I seemed to have perturbed a fellow motorist in an older 330Ci coupe who did not approve of my ride or the music that was emanating from it, however, he’ll now have to come up with a damn good excuse as to how he lost to a Buick. Driving over some segments of Pennsylvania’s concrete highways, I couldn’t help but notice road noise coming in through the cabin.

Much like the non-turbo tester I had last year, the turbo is just as quiet and refined.

It wasn’t overly intrusive but in the quiet cabin of the Buick, it was a bit of a surprise. I got to Speed1, drooled over the various rotary powered cars, loaded my engine and other accessories into the trunk (which looked like I could fit at least 2 or 3 more rotary engines in there) and headed back home. On the eight hour round trip, I found one thing that bothered me about this car, and it’s the same thing that bothered me about the regular Verano: it doesn’t have lumbar support. As comfortable as the seats are, and as soft as the leather is, the lack of support for my spine was brutal. You can chalk this complaint to years of sports injuries piling up. It may not be a problem for the majority of you out there, but for me it’s a painful issue.

I love the simplicity of the infotainment controls of this car. The voice recognition is fantastic whether you are using the navigation or Bluetooth. Just press the voice icon on the steering wheel and follow the prompts. The navigation screen can be navigated using touch, however, like its regular brethren, the screen was a little distant for my arm to reach with my position. The 9 speaker Bose sound system is crisp and clear and with the windows rolled up, you can enjoy the full cacophony of sound with nary any outside noise. I couldn’t ask for anything else from the infotainment system on a road trip. 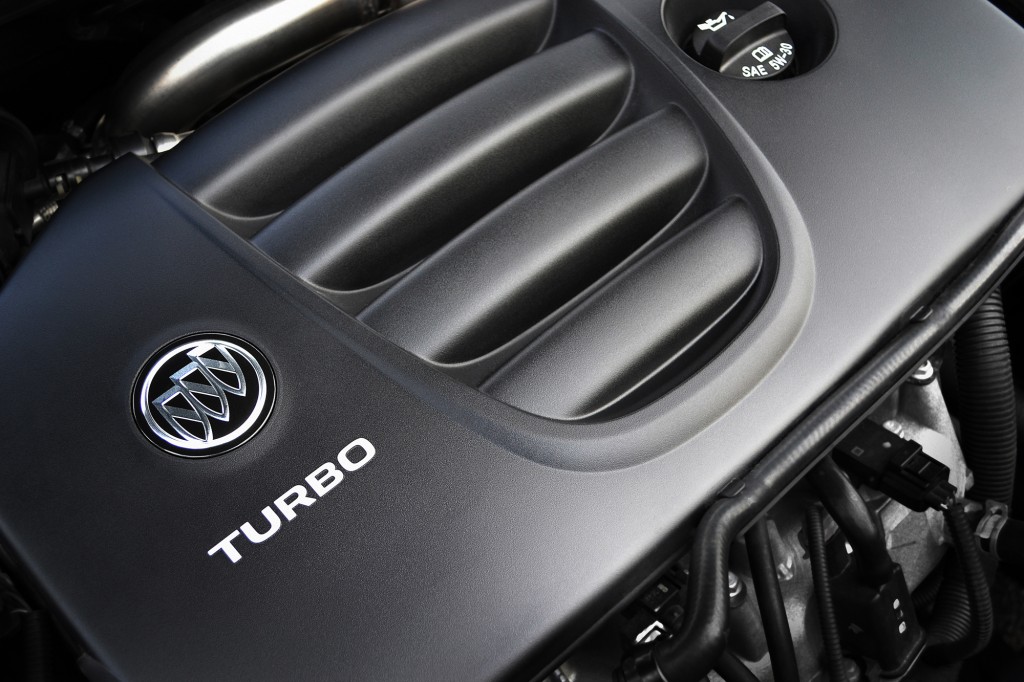 Overall, I averaged around 25.8 mpg. The EPA rates the Verano Turbo at 21 mpg city/30 mpg highway. On my trip, it hovered above the 26 mpg mark with speeds around 75-80 mph. I must admit that hearing the sounds of a turbo building PSI, and a wastegate dumping it just feels alien to me in a Buick. It isn’t the least bit intrusive with the windows down or up, as it’s pretty subdued but it is exciting to hear when you are on or off boost. I’m a fan of naturally aspirated engines, but I am slowly getting addicted to boost.

Our 2013 Verano Turbo tester rang the register at $31,280. The 2.0 Turbo is only available in the Premium trim level which bases at $30,000. Buick equipped this press car with the upgraded Audio System with Navigation for $795 and the White Diamond Tricoat costing an extra $495. Destination charges came out to be $885. Quite the bargain for what you get. Personally, I would have forgone the tricoat paint job for the power sunroof ($900). Buick came out swinging with the Verano against its main competitor, the Acura ILX. With the Verano having a lower overall entry price and even offering more bang for buck, Buick is hoping to steal sales away from Acura and even other automakers with clever packaging, unique styling, and more power. So far, it seems to be working in Buick’s favor.